This is the terrifying moment a van driver narrowly avoids hitting a toddler on a balance bike.

The child steered into the middle of a busy road in Norfolk and driver Steven Ashby was forced to swerve out of the path of the little boy.

Without a care in the world the child can be seen happily peddling down the road and is close to the pavement, before he starts to veer off course.

But the guardian of the child seems quite far behind and as the video continues they can be seen running towards the child, while someone else is also on the pavement pushing a stroller.

The young boy was seen swerving into the main road in the Bowthorpe area of Norfolk, an adult can be seen running after him (pictured above)

Mr Ashby, 39, managed to miss the child who was pulled back to safety by the adult.

No-one was injured during the incident which happened in the Bowthorpe area at around 8.45pm on September 9, but Mr Ashby has now highlighted the importance of road safety.

Mr Ashby, a carpenter, who had been on his way to a first aid course said: ‘I saw this coming further back up the road as I have a child about the same age and I know how unpredictable they can be.

‘I slowed down as I approached him but it still shocked me as he came out into the road.

‘I don’t know what was going on in the parent’s head, they just didn’t realise how dangerous it could be.’

He added that he had known someone whose child was killed on the road and said this had made him ‘more paranoid’ about road safety.

‘I’ve always got hold of my little one’, he said.

‘I wanted to make people realise how important it is to be on the ball when they’re behind the wheel. 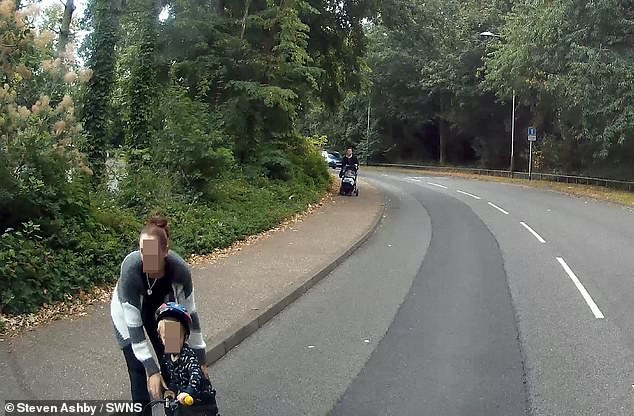 The woman above caught up to the child and got him out of the road, while another adult was seen walking behind with a stroller

‘I drive a lot for work and because I’m higher up in my van, I see people on their phones and other things that make them lose their concentration for a moment.

‘It only takes a split second for something like this to happen and if you’re not keeping your wits about you, it doesn’t bear thinking about the consequences.’

After seeing the footage, a spokesman for the Royal Society for the Prevention of Accidents, said: ‘This must have been an extremely worrying incident for everyone involved.

‘We are relieved that the driver was able to stop safely and avoid any more serious consequences.

‘Sadly, this is not always the case – a total of 28 child pedestrians were killed in Great Britain in 2018, according to figures from the Department for Transport.’

The spokesperson added that it is important for drivers to be aware that pedestrians, especially children, may well make mistakes.

‘Drivers need to anticipate this and, in particular, watch their speed.

‘Of course, we encourage parents and carers to get out and about with children to experience the road environment because it is great way to help children learn about road safety, and we promote active travel like walking and cycling.

‘However, it is important that very young children always remain close to an adult when in a road environment.’