Terrifying moment Chinese boyfriend performs a U-turn on the motorway

Terrifying footage captures the moment a Chinese boyfriend performs a U-turn on a motorway and drives into oncoming traffic after an argument with his girlfriend.

The dashcam clip, filmed on the Taizhou-Zhenjiang Expressway in Danyang, captures the furious motorist as he drives along the busy road in the Jiangsu Province in East China.

He then begins to slow on the inside lane of the motorway, before suddenly braking in the hard shoulder and making a sharp left turn into oncoming traffic.

The dashcam clip, filmed on the Taizhou-Zhenjiang Expressway in Danyang, captures the motorist as he makes a sharp left turn into oncoming traffic

The driver turns across three lanes into heavy traffic and begins repeatedly honking his car’s horn while heading towards motorists traveling in the other direction.

In the footage, a female passenger shouts: ‘What do you think you’re doing? Are you insane?’

As more than 30 cars swerve past the driver, narrowly avoiding head-on collisions, the woman begins to scream in fear. 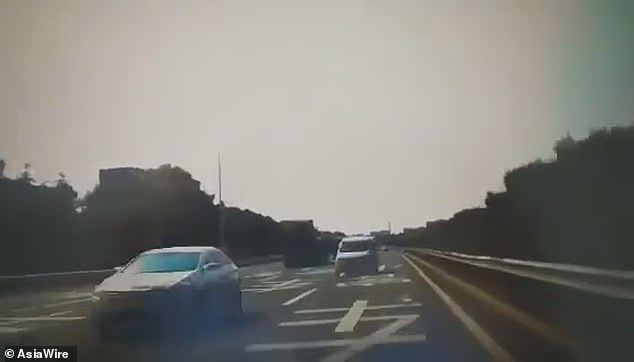 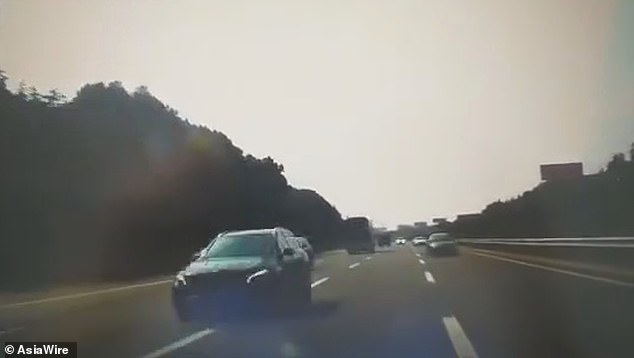 The passenger can then be heard shouting ‘I’m calling the police!’ as the short clip comes to an end.

The incident allegedly began after the couple in the car fell into an argument, and the driver decided to turn his vehicle into oncoming traffic in order to scare his partner.

Zhenjiang Police confirmed they are investigating the case and did not release any further information. It is unclear if any arrests have been made.