This is the terrifying moment two Jewish shop owners are assaulted by a passer-by in a ‘brutal, unprovoked and anti-Semitic’ attack on the eve of Holocaust Memorial Day.

The shocking video shows the pair locking up their shop in north London, when they are approached by a passer-by who launches an astonishing attack, knocking one to the floor and causing both to lose their kippah.

The attack, which is being probed as a hate crime by police, took place in Stamford Hill – a prominently Jewish community which saw a ‘worrying rise’ in anti-Semitic violence following escalating tension in the Middle East last year.

It also happened hours ahead of Holocaust Memorial Day, a solemn remembrance of those six million Jews who were systematically killed under the Nazi regime.

Today police said the video of the attack ‘on this important day’ was an ‘awful reminder that hate crime still exists’.

Meanwhile, representatives from neighbourhood watch group Shomrim Stamford Hill say the incident was ‘without a doubt’ a racially motivated attack.

They say the two men were punched in the face ‘with great force’ in a ‘sustained attack’, which saw one man suffer bruising and a fractured hand while the second man was also left badly bruised and has an eye injury.

Police are investigating the incident and have confirmed they are treating it as a hate crime. An 18-year-old man has been arrested on suspicion of causing actual bodily harm and remains in custody.

Chief Superintendent Simon Crick said: ‘On this most important day, this is an awful reminder that hate crime still exists.

Pictured: This is the terrifying moment two Jewish shop owners are assaulted by a passer-by in a ‘brutal, unprovoked and anti-Semitic’ attack in London which was caught on CCTV cameras 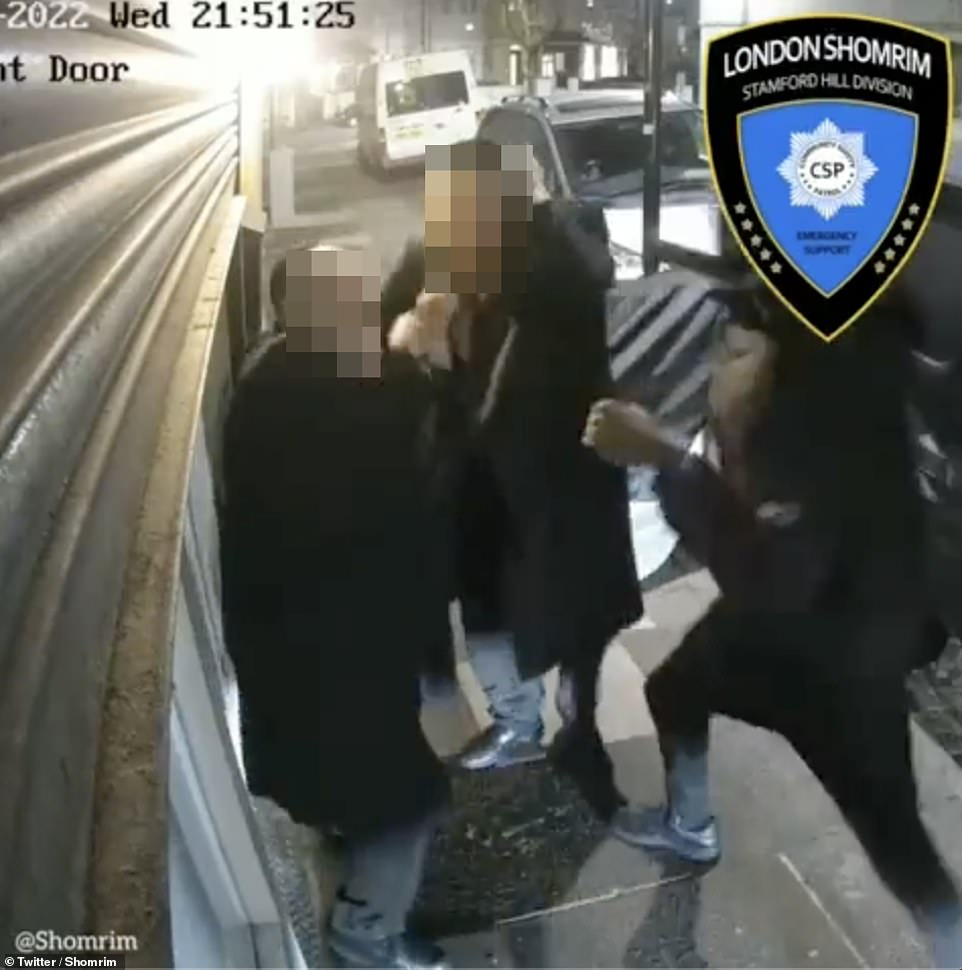 Video then shows the man launching an astonishing attack on the two men, knocking one to the floor and causing them to lose their kippah. Police are treating the incident as a hate crime

‘I know that Haringey residents will be upset by such a horrible attack and we won’t stand for anyone in our community being targeted or hurt.

‘If you assault someone, you can expect us to do everything we can to investigate and find you.

‘I have been in touch with members of the local Jewish community and I’m providing additional patrols throughout the day to reassure the community. Please do speak to them if you have any concerns.

‘I would like to thank the members of the public who called us and asked us to come to the aid of these two gentlemen, and grateful for their help which meant we could locate a suspect.’

Today local Jewish leaders have slammed the incident as a ‘brutal and unprovoked attack’, which they claim was fuelled by anti-Semitism.

‘The brutal, unprovoked attack saw the victims knocked to the floor by vicious punches to the head.

‘Located the suspect through CCTV enquiries. Arrested by Harringey Police.’ 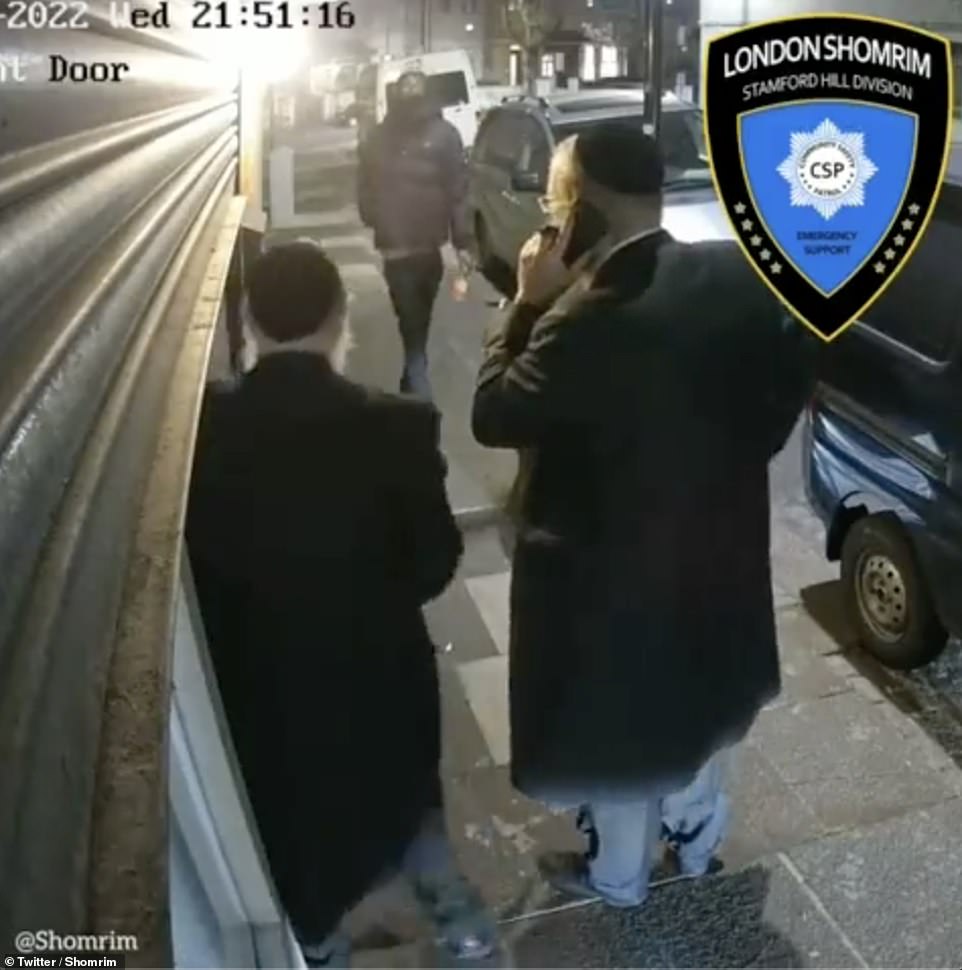 Pictured: the video shows the two Jewish men leaving the shop on Cadoxton Avenue in South Tottenham, London, at around 9.50pm. As the pair walk under shutters and step out into the street they are approached by a lone male in a dark puffer jacket and dark trousers 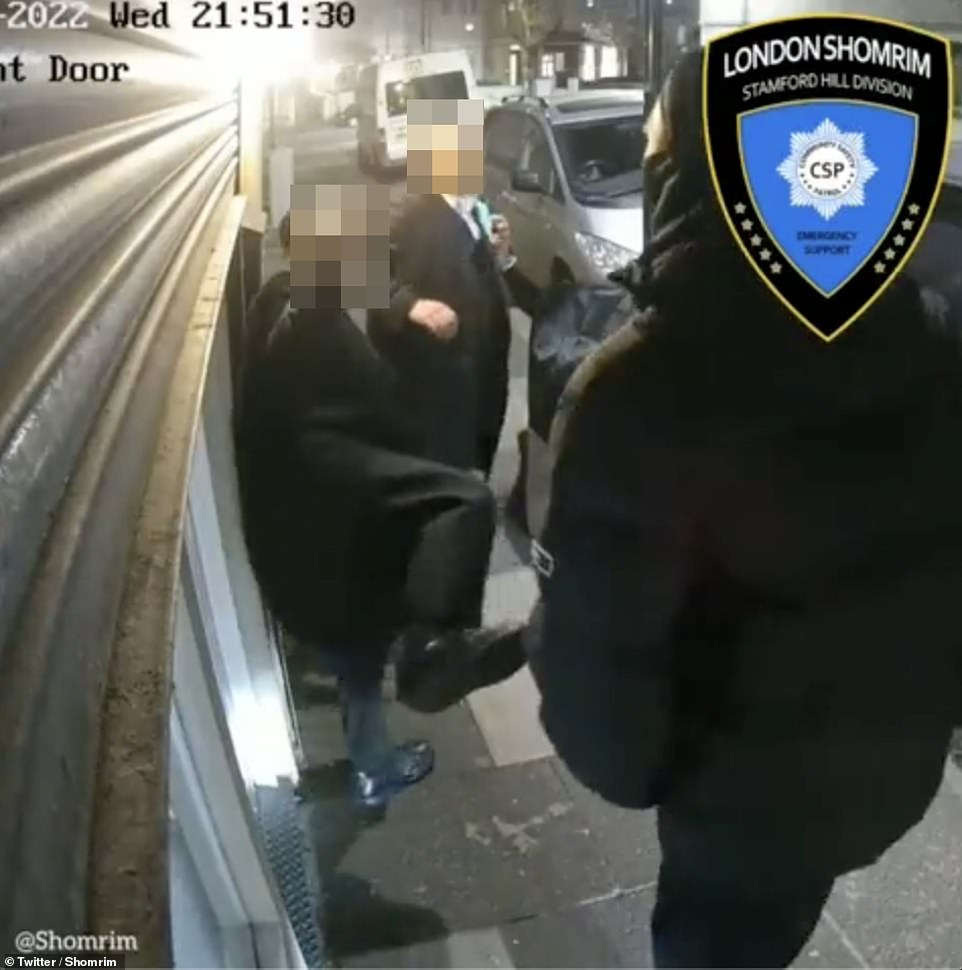 As the suspect walks past the victims’ shop, one of the two Jewish men appears to exchange words with him as he nervously raises his right arm in defence before the attack escalates 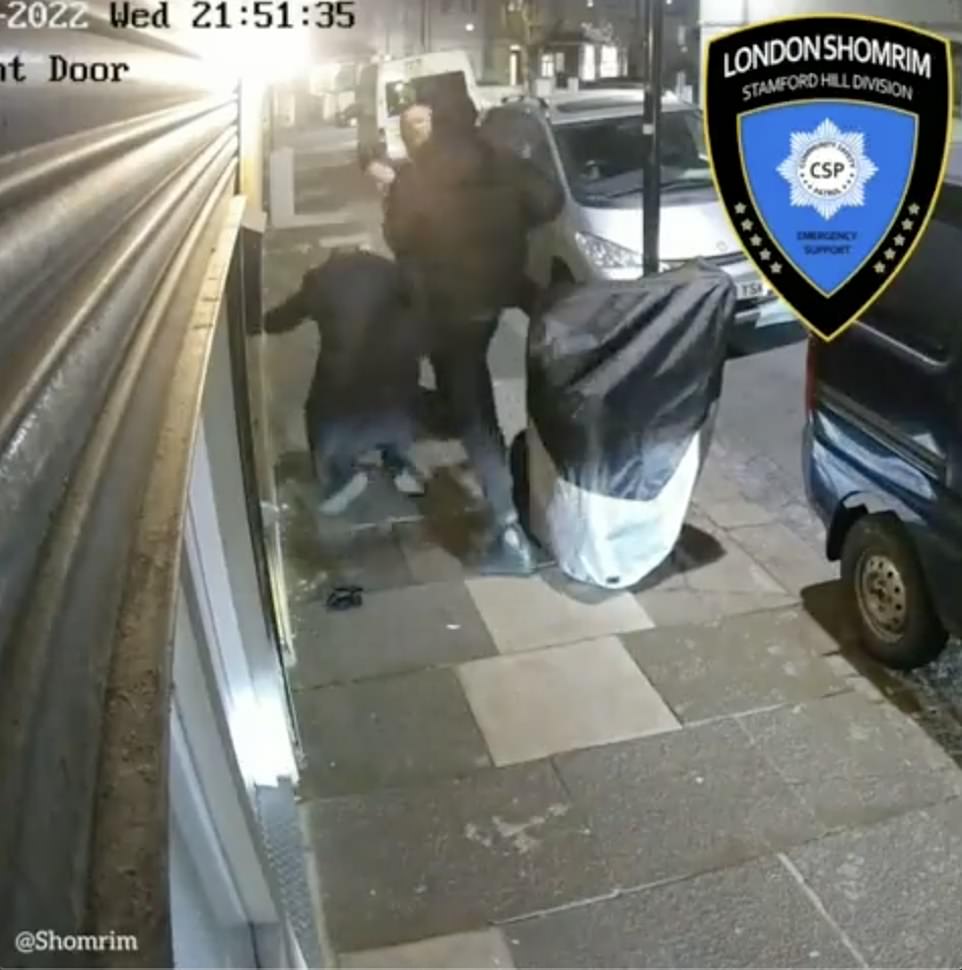 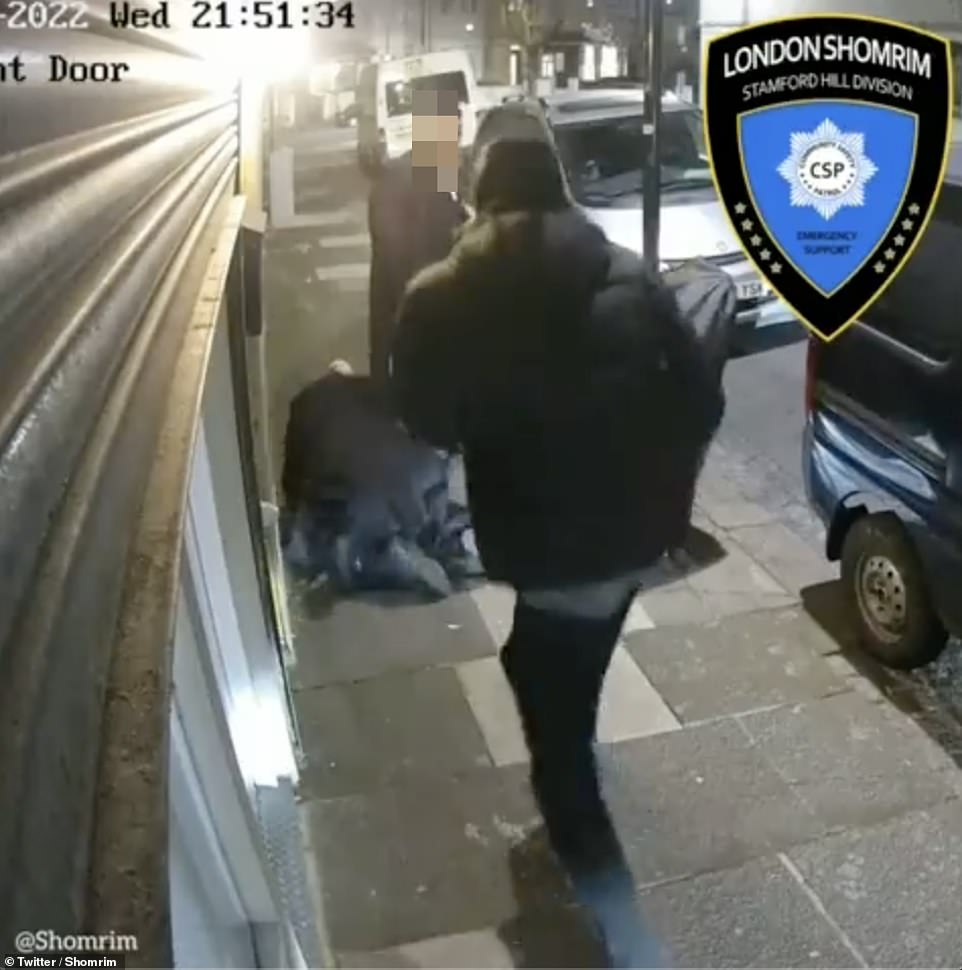 Pictured: The lone suspect repeats his attack, punching one of the men in the head, sending the victim tumbling to the ground at which point his kippah falls from his head to the floor

The video shows the two Jewish men leaving the shop on Cadoxton Avenue in South Tottenham around 9.50pm on Wednesday.

As the pair walk under shutters and into the street they are approached by a lone male in a dark puffer jacket and dark trousers.

As he walks past, one of the Jewish men appears to exchange words with him as he nervously raises his right arm in defence.

The attacker is then seen unleashing a volley of punches as one of the men raises his foot to try and keep him at bay.

But he repeats his attack, punching one of the men in the head, sending him tumbling to the floor. At this point his kippah falls from his head.

The man then unleashes a volley of punches at the other man, causing him to lose his kippah.

The attacker then chases one of the men, before stopping his attack. He is then seen continuing his walk past the shop, kicking one of the men’s kippah as he does so.

The kippah is a brimless cap, usually made of cloth, and traditionally worn by Jewish males to fulfil the customary requirement that the head be covered.

In the Orthodox Jewish community it is worn by men at all times.

In a statement issued to MailOnline, a spokesman for Shomrim said: ‘Shomrim were called at 9.52pm yesterday January 26 to an assault on Cadoxton Ave. 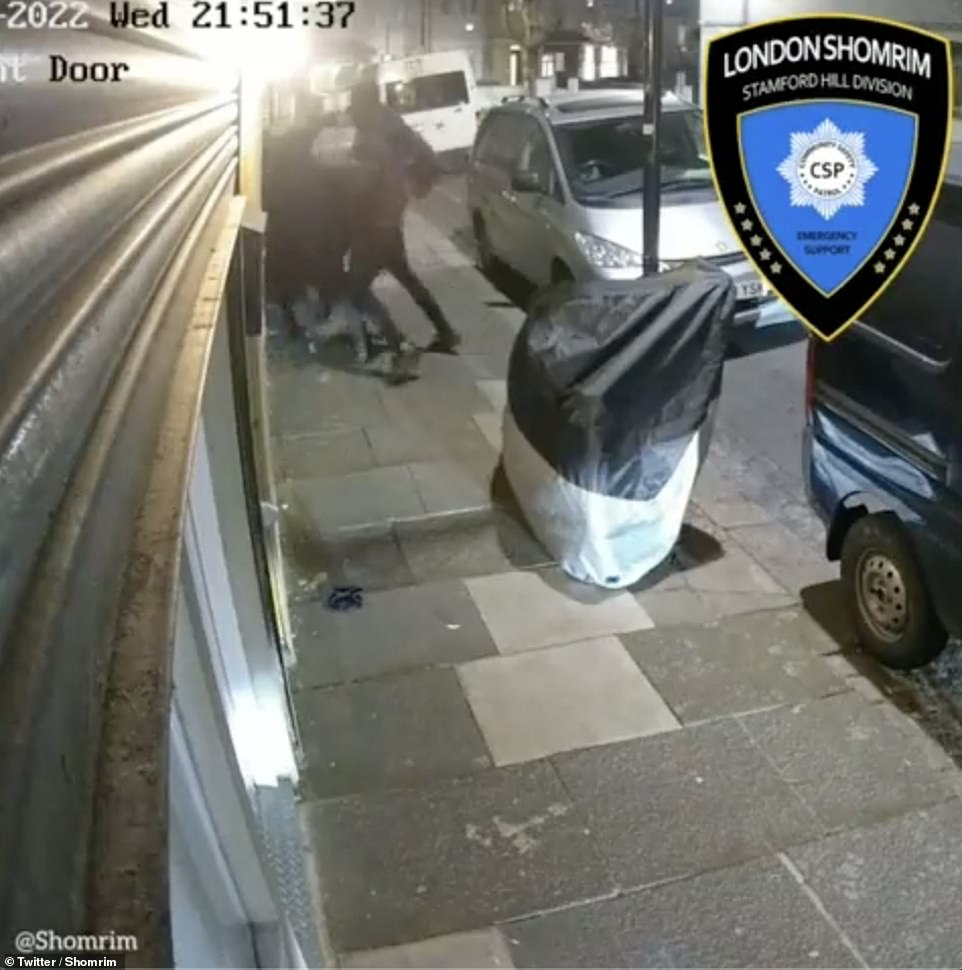 The man then unleashes a volley of punches at the other man, causing him to lose his kippah 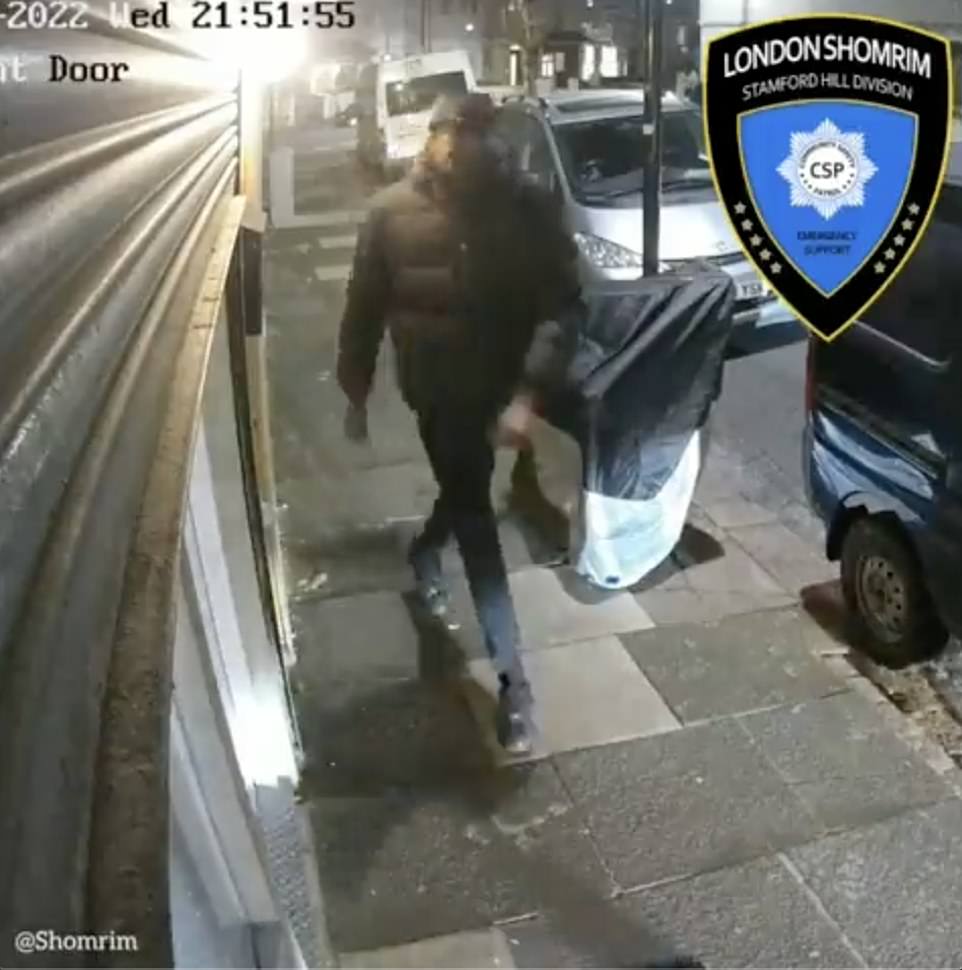 Pictured: The attacker then chases one of the men, before stopping his attack. The man is then seen continuing his walk past the victims’ shop, kicking one of the men’s kippah as he does so

‘On arrival some two minutes later our Shomrim volunteers discovered two Jewish men whilst locking up their shop, had been subject to a brutal and sustained attack by a black male.

‘The attacker repeatedly punched the Jewish men in the face with great force knocking them to the ground.

‘The attack went on for some time. After the attack the perpetrator kicked the kippah as he walked away.’

Shomrim viewed CCTV and added ‘without doubt this attack appears to be racially motivated’.

The group said they are supporting the victims, their families and the community.

Shomrim volunteers say they conducted enquiries and, using CCTV and local knowledge, tracked down a suspect who was arrested and remains in custody. 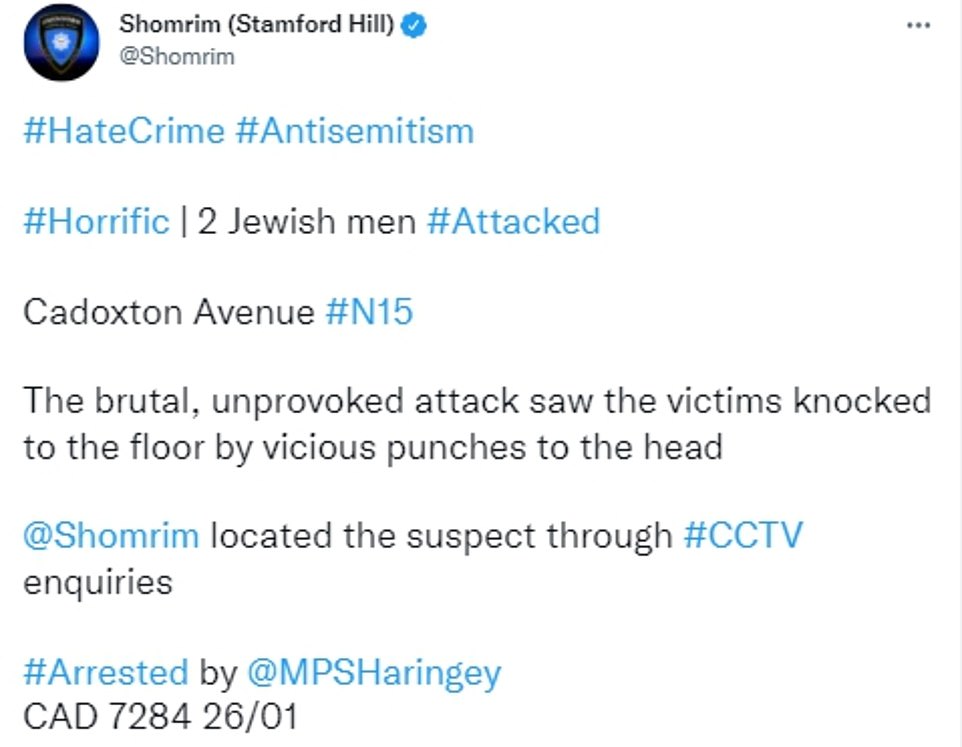 The attack took place on Wednesday night, just hours before the start of Holocaust Memorial Day.

Held on January 27 – to mark the date in 1945 that the Auschwitz concentration camp was liberated – Holocaust Memorial Day is held each year to remember the millions of people murdered in the Holocaust, under Nazi persecution.

Today Prince Charles has hailed seven portraits of some of the UK’s last remaining Holocaust survivors as a ‘powerful testament’ to their lived experience.

MPs will also mark the day by holding what is known as a ‘general debate’ – which allows MPs debate a subject without committing the House to an opinion or course of action – on Holocaust Memorial Day 2022 in the House of Commons.