This is the terrifying moment an alleged road rage victim desperately clings to the bonnet as a Mercedes car drives along a busy main road.

The shocking scene was captured by a motorcyclist on the A4 near Brentford in West London, who then chased after the driver in an attempt to confront him.

The motorcyclist, who runs the YouTube channel Mr Short Rider, then caught up with the silver Mercedes A180 driver at a junction and asked what happened.

But the unapologetic driver replied: ‘I don’t care, bruv. He was trying to block off the road, innit, being a d***head, a***hole. He was just being a pr***.’

The driver, who was filmed just after 12pm last Sunday, added: ‘He got what was coming to him, didn’t he, being an a***hole, bruv.’

The motorcyclist replied: ‘F***ing hell man, but you have to be careful man. There’s people after you, you know that, right?’

Police revealed the victim in his 30s was driven for a few hundred yards towards Chiswick and the incident was seen by an officer in an unmarked patrol car.

The victim was taken to hospital for treatment but later discharged, and officers are still trying to find the Mercedes driver. 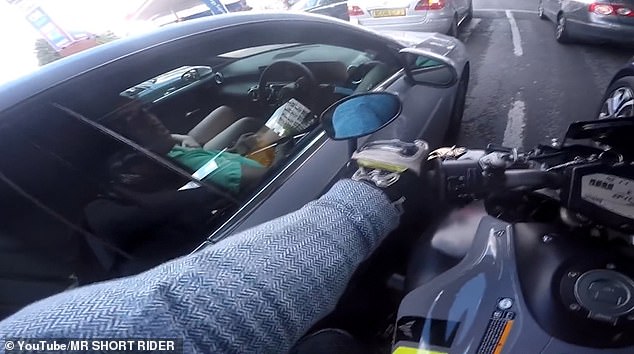 The unapologetic driver told the motorcyclist: ‘He was trying to block off the road, innit’

A Scotland Yard spokesman said: ‘Police in Hounslow are investigating a GBH attack after a man in his thirties was injured following a ‘road rage’ incident.

‘At approximately 12.09pm on Sunday, May 12, an officer in an unmarked police car witnessed an altercation between two drivers.

‘This culminated with one party being forced onto the bonnet of the suspect’s car which drove off at speed – with the victim on the bonnet – for a few hundred yards towards Chiswick.

‘The victim, a man aged in his 30s, attended hospital for treatment. He has since been discharged. Efforts to trace the driver of the car involved continue.’