This is the horrifying moment a thug doused a model and her cousin in acid through their open car window on her 21st birthday in an attack that drove them both to attempt suicide.

John Tomlin, 25, inflicted horrific injuries after hurling acid at Resham Khan and her cousin Jameel Muhktar, 37, as they waited in their car at a traffic light in Beckton, east London.

The footage seen for the first time today shows Tomlin chasing them down the street and throwing the corrosive liquid on them before calming walking off the road and away along a footpath.

His victims were scarred for life with Miss Khan, who dreamt of being a model, put in an induced coma because her injuries were so terrible and she said today: ‘This was the day when my face was taken away from me’.

Mr Muhktar has terrible scars to the right side of his head as well as losing his hearing in one ear.

He has also been tortured emotionally because he chose to throw water on his cousin instead of himself but this selfless act made her injuries worse, the court heard.

John Tomlin, 25, can be seen here chasing his victims down the street and chucking acid on them through their open window 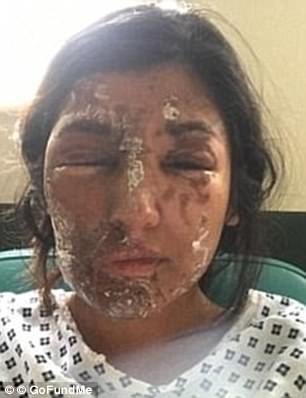 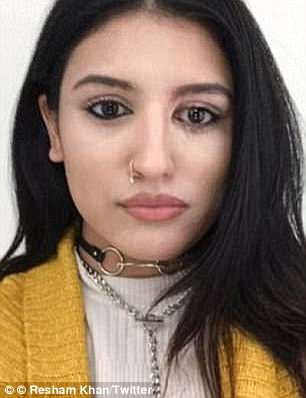 Model Resham Khan (left afterwards, right before) was so badly injured she had to be put in a coma after being attacked in a car at a traffic light in Beckton, east London 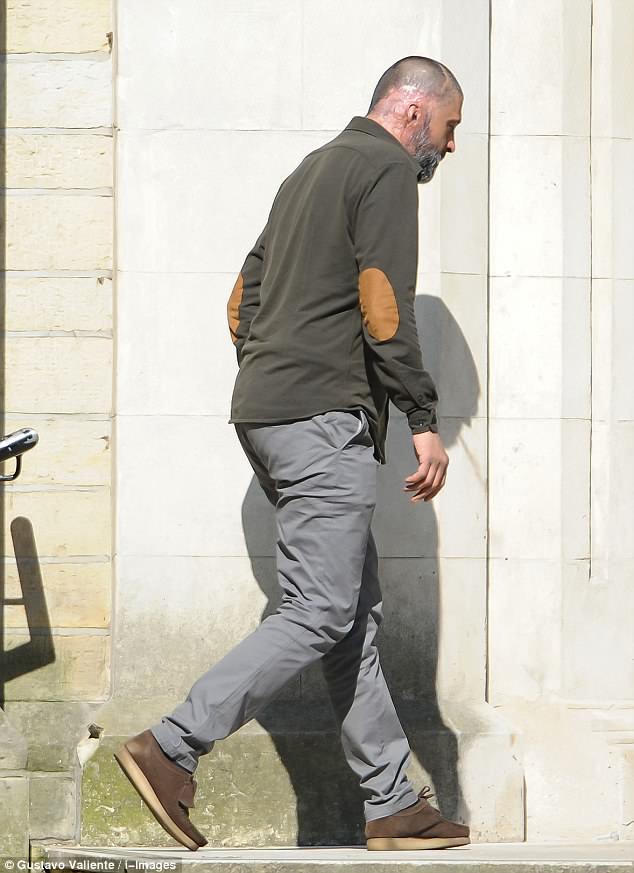 They have said since that they have both considered suicide and are ‘unable to look in the mirror’. 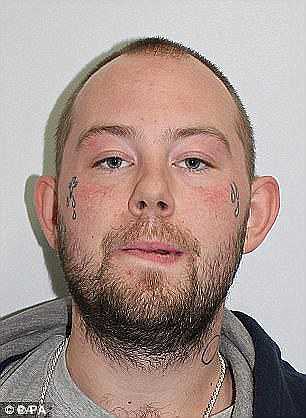 John Tomlin, 25, inflicted horrific injuries and refused to give a motive

Details of their injuries were given during the sentencing of John Tomlin, 25, at Snaresbrook Crown Court on Friday.

Both victims read statements to the court and were supported by their families.

Ms Khan broke down in tears as she described the devastating impact the attack has had on her life.

She will carry lifelong scars to her face, particularly her eyes, and has suffered from severe depression and anxiety as a result of the attack.

She said she was ‘extremely happy, confident and my self esteem was high’ but has since tried to take her own life a number of times.

‘I had so many plans for the future including to start a business and interviews for jobs,’ she added.

‘It is upsetting to see my cousin affected by this – he threw water on me rather than himself which made his injuries worse.’

She continued: ‘My 21st birthday turned into a day where my face was taken away from me.

‘I have been looking at myself in the mirror it upsets me, it brings back the incident on the day, it doesn’t look like me.

‘No matter what his sentence may be, these injuries will affect me for the rest of my life.’ 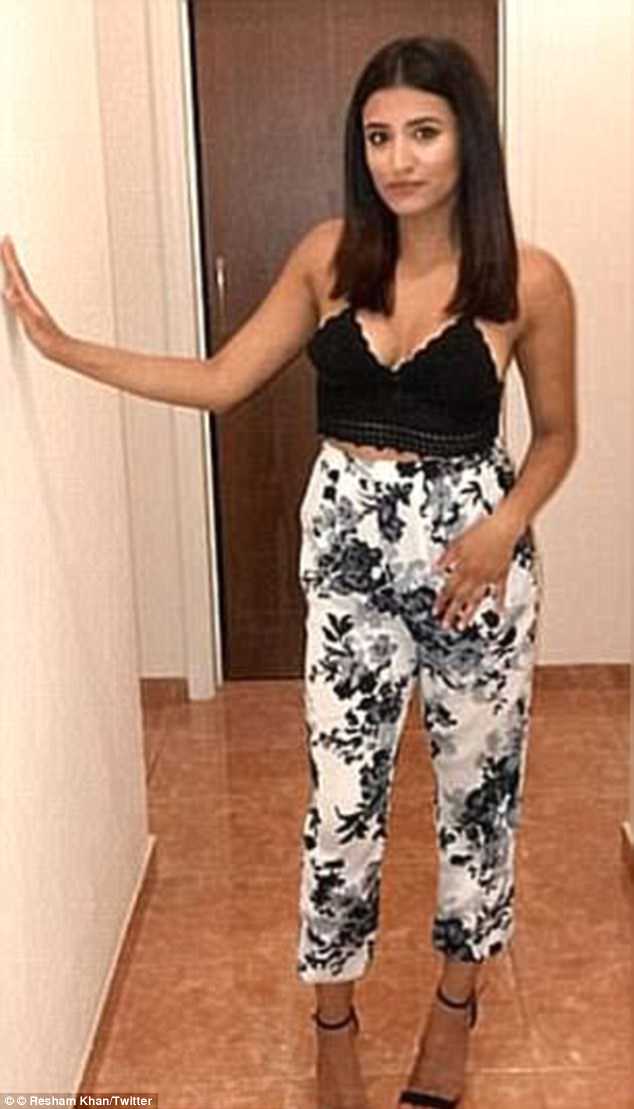 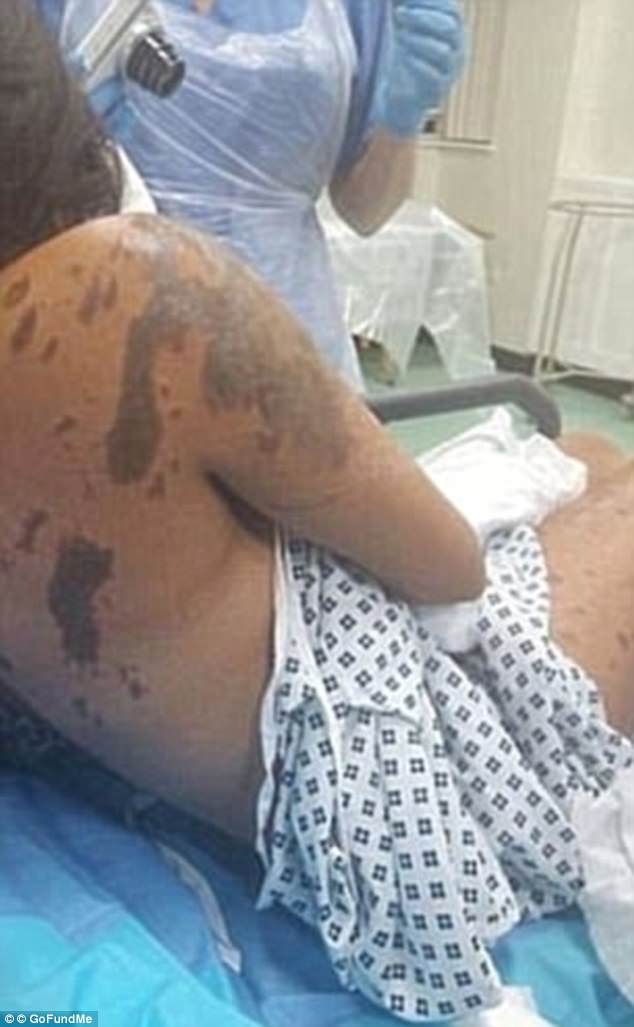 Mr Muhktar has permanent scarring to his head, neck and body and lost hearing in one of his ears.

He also suffers from depression and said he has tried to take his own life.

He became so emotional while reading his statement that the prosecutor had to finish for him.

‘Since the attack I have been hurting in many different ways, I don’t feel like I’m the same person,’ he said.

‘Everywhere I go I get stared at. This upsets me.

‘I get flashbacks and am really worried to leave my house, constantly looking over my right shoulder fearing attacks.

He said that as well as his physical injuries he also suffers from severe depression and tried to take his own life.

‘I am still in so much pain, I’m still burning and struggle to sleep at night,’ he added.

‘My self esteem is zero, my future is finished, I have nothing to look forward to.

‘I am mentally and physically scarred for life. I can’t even have a relationship. It’s enough dealing with myself.’

In November he changed that plea to guilty. It means he could face a life term when he is sentenced in January.

Judge Sheelagh Canavan said the attack appeared to be random because the victims had no previous dealings with Tomlin before the incident just after 9am on June 21 this year in Beckton, east London.

She told Snaresbrook Crown Court that Tomlin, who has teardrops tattooed on his face, would undergo a psychiatric assessment before he is sentenced.

A motive for the attack is yet to be given in court, but Tomlin, of Canning Town, east London, has previously been sectioned under the Mental Health Act and has been prescribed anti-psychotic medication.

Police have said the attack was not racially motivated but happened after an argument between Mr Muhktar and Tomlin on the pavement.

After Mr Muhktar returned to his car Tomlin hurled acid through the passenger window where Miss Khan was sitting. He then moved round to the driver’s side where he threw acid at her cousin.

She has also posted pictures of herself out with friends, declaring last month: ‘It’s time to stop hiding.’ She has written emotional posts throughout her journey, once telling how her dreams of becoming a model had been destroyed.

Describing the attack, she wrote on Twitter: ‘I saw my clothes burn away in front of me. We stripped off in the middle of the road, running around screaming and begging for water.’

She went on: ‘My plans are in pieces; my pain is unbearable, and I write this in hospital whilst I patiently wait for the return of my face.

‘Currently, I have two main priorities: to make a full recovery and to make sure no one ever goes through the living nightmare I have endured.’

She has been described as ‘a true inspiration’ on Twitter where she has 20,000 followers.

Mr Muhktar suffered severe burns to his right eye, arms, back, legs and neck and was left deaf in one ear.

He said after the attack that his injuries felt like ‘somebody is ironing me 24/7’, adding: ‘I’m in continuous pain.

I don’t go outside and I can’t even look at myself in the mirror.’