Terror charges are dropped against ex-British Army soldier, 32, who travelled to Syria to fight against ISIS

The case against a former British soldier accused of wanting to fight against Islamic State alongside Kurdish militia in Syria has been dropped.

Daniel Burke, 33, from Manchester, had been in custody since December when he was detained in a port stop.

He was charged with three terror offences, including helping Daniel Newey, another British man who had allegedly gone to Syria last year.

Following defence disclosure applications, it was announced at the Old Bailey on Friday the prosecution would offer no evidence against Mr Burke.

Daniel Burke, 33, from Manchester, had been in custody since December when he was detained in a port stop

Prosecutor Simon Davis also said the Crown would not proceed against Daniel Newey’s father Paul, 49, and brother, Sam, 19, from Solihull in the West Midlands, who were accused of helping him.

Mr Davis said a review had found there was no longer a ‘realistic prospect of conviction’.

Defence barristers responded by calling for a more detailed explanation.

Andrew Hall QC, for Mr Burke, told the court it was in the ‘interests of justice’ that the reasons were known.

Richard Thomas said Paul Newey was a ‘hard working man vilified in this country and abroad as a terrorist’.

He told the court: ‘We say he is entitled to an explanation.’

Sam Newey’s lawyer Balbir Singh added that their lives had been ‘turned upside down with the anxiety that they have had to suffer’. 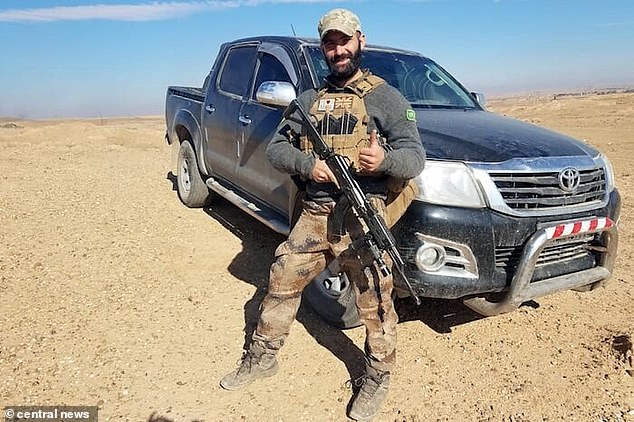 He was charged with three terror offences, including helping Daniel Newey, another British man who had allegedly gone to Syria last year. the charges against him have been dropped

Mr Justice Sweeney adjourned the hearing to allow the prosecution time to consider the matter.

He said: ‘I appreciate there may be public interest sensitivities involved because this decision has been taken in the context of a disclosure exercise but reconsideration may make the prosecution cast more light on the decision.’

The prosecution had alleged Mr Burke had repeatedly shown his desire to leave the UK to return to Syria in order to fight for Kurdish militia.

When he was stopped last December, Mr Burke told officers it was ‘a joke’, saying: ‘I’m not a terrorist; you know I am not a terrorist. I have done nothing but fight for this country.’

Mr Burke, who formerly served in the Parachute Regiment, had been due to face trial in Birmingham later this year alongside the Neweys.

The first charge against Mr Burke alleged he assisted Daniel Newey to commit, prepared or instigate an act of terrorism last October.

The second charge alleged he was involved in an arrangement with others to provide money and military equipment while having reasonable cause to suspect that it would or may be used for the purposes of terrorism.

He was further charged with engaging in conduct in preparation to commit, prepare or instigate an act of terrorism between October 7 and December 7 last year.

Paul Newey was charged with funding terrorism by entering into an arrangement to provide £150 his son Daniel last November.

Sam Newey had been charged in February with one offence of giving assistance to his 27-year-old brother.

The Neweys had been on bail, while Mr Burke is understood to have been released from custody on Tuesday.