Tesco Express kicks great-grandfather, 64, out of store because he refused to take off his flat cap

A great-granddad was left fuming after he was booted out of a Tesco store – for refusing to take off his FLAT CAP.

Graham Cattermole, 64, was giving his marching orders by an overzealous security guard after he popped into the supermarket to pick up some shopping.

He had gone into the Tesco Express with his wife Chrstine, 61, and had not even started shopping when he was told to remove his beige cotton flat cap.

Graham Cattermole, 64, had been ordered to remove his flat cap after entering a Tesco Express store in Dudley, West Midlands by a security guard who was over zealously enforcing a rule prohibiting patrons from wearing hoodies and crash helmets 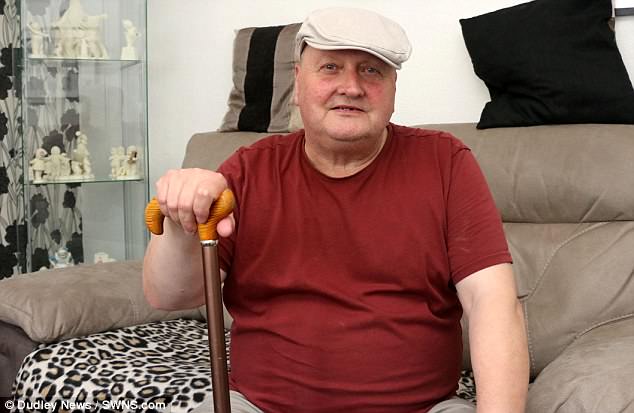 When the great-grand father, pictured, refused to take off his cotton cap, he was told to leave

The electrician, who is just a year off retirement, refused to do and was swiftly ejected from the store in Upper Gornal, Dudley, West Midlands, on Tuesday.

The supermarket giant has since apologised and admitted they had implemented their policy on hoodies or crash helmets incorrectly.

Mr Cattermole, who lives with Christine, a finance manager, in Dudley, said: ‘We went into the Tesco Express – the wife was a couple of feet in front of me and I was just about to go down one of the aisles.

‘Then a security guard came up to us and said ‘sorry, you’re going to have to take your hat off or you can’t come in’. I thought ‘how stupid can you be?’

‘If I had a crash helmet on or I was wearing a hoody and looked like a hooligan, I could understand but I’m nearly 65 and I’ve got a walking stick – it’s not like I’m going to hold the place up.

‘I had been in many times wearing a hat – normally a trilby. It had never been a problem at all. He said they have a no-hat policy there, so we turned round and came out.

‘A couple of customers who were by us just looked on in amazement.

‘It was a bit embarrassing because there was no way he was going to let us shop in there unless I took my hat off.

‘But there was no real reason for me to take the hat off. If it was a crash helmet, then yes.

‘It was ridiculous. I said to the wife ‘we’ll go home.’

Mr Cattermole, who lives 10 minutes from the Tesco, said he had shopped their for many years.

Mr Cattermole phoned Tesco to complain, and was eventually passed to staff at the local store, who apologised and offered for him to come in for a face-to-face apology.

He said: ‘According to the local store he was an overzealous door man who had not been there for long.

‘He took their policy of no hoodies or crash helmets to mean no hats at all.’

A Tesco spokesman said the security guard, who was new to the store, had ‘implemented our policy on no hoodies or crash helmets incorrectly’.

They added: ‘We would like to apologise to our customer for the inconvenience caused and our store manager would be happy to welcome the customer into store to discuss the matter with them.’

The spokesman said the security guard had now been retrained.