A California police officer was forced to abandon a high speed pursuit up to 120mph because his Tesla cop car was running out of power.

Fremont officer Jesse Hartman was chasing a ‘felony vehicle’ wanted in connection with a crime in Santa Clara, when he noticed his vehicle had low battery.

He spotted the car parked in the lot of a business in Ivrington District on Friday and after confirmed the license plate was correct he attempted a traffic stop.

The driver took off at a ‘high rate of speed’ followed by the Tesla and other units including California Highway Patrol, a police spokesperson told DailyMail.com.

After the Tesla’s warning Hartman relayed to dispatch: ‘Just slowed down to six miles of battery on the Tesla, so I may lose it here in a sec. 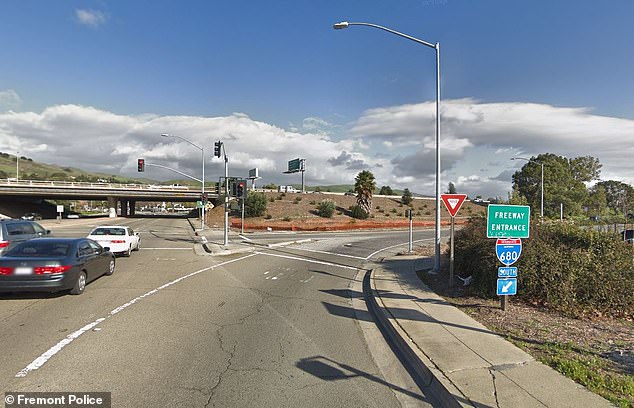 Officer Jesse Hartman had to cease his pursuit of the vehicle near to Jacklin Road exit on Interstate 680 south in Milpitas, where other cops and highway patrol took over

‘If someone else is able, can they maneuver into the number one spot?’ he added according to an audio recording.

Other officers took over the chase, which soon ended because it was deemed no longer safe due to ‘unsafe driving maneuvers by the suspect.’

After the 10 mile pursuit near south Milpitas, the suspect’s vehicle was found abandoned in San Jose.

Meanwhile, the Tesla Model S patrol car was taken to a charging point in the area and later returned to Fremont.

A spokesperson told DailyMail.com that they could not comment on an ‘exact reason’ why this car wasn’t fully charged on that particular day.

They said: ‘This unfortunately happens from time to time even in our vehicles that run on gas, if they aren’t re-fueled at the end of a shift.

‘It’s not too often, but we have had a couple of situations where officers have run out of gas.’

The cop car had less than 50 percent battery when the officer started his shift at 2pm and continued to run nine hours until the end of the working day.

This meant the vehicle had been used for nearly two full shifts before needing to be charged, police reported. 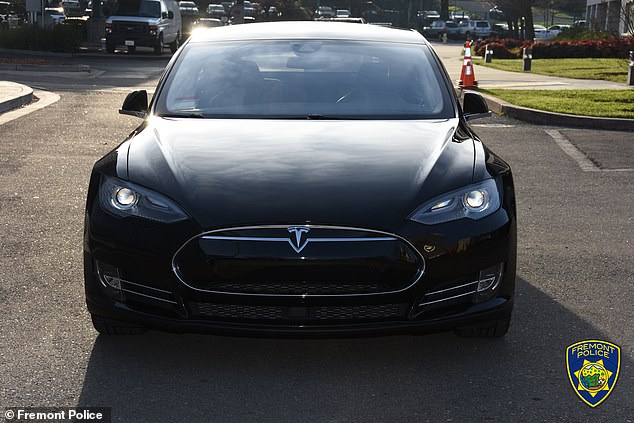 A Fremont Police Department told DailyMail.com that the vehicle was less than 50 per cent charged when Hartman entered the vehicle. From there it last until the end of his shift nine hours later and up until the pursuit. They could not comment why the vehicle was only partially charged

The spokesperson said there was no written policy regarding gas or charging vehicles but general guidelines state they need to be at least half full at the beginning of a shift.

They told DailyMail.com: ‘This one instance does not in any way change our feeling regarding the performance of the vehicle for patrol purposes.

‘So far the car is meeting or exceeding our expectations. We are still in our first 6 months of the pilot program and we’re keeping track of all the data.’

The Tesla is able to drive up to 265 miles on one charge, Fremont police told the Sacramento Bee. The force are aiming to cut their greenhouse emissions to 25 per cent of the 2005 levels.