Tesla could announce its next Gigafactory in CANADA by the end of the year, lobbying suggests

Tesla could announce its next Gigafactory in CANADA by the end of the year, with Elon Musk hinting he might want to invest in his mom Maye’s homeland

Tesla’s next Gigafactory might be built in Canada, if its new lobbying efforts and hints from CEO Elon Musk are correct.

During Friday’s annual meeting of stockholders in Austin, Musk said the company is considering the entirety of North America for potential new factories and asked audience members as to where he should build the next gigantic factory for the carmaker.

‘We are looking at sites, but we are considering some sites options more broadly in North America, so including Canada and Mexico, and the U.S. as well,’ he said. A number of audience members shouted out Canada, as well, when he asked.

Tesla CEO Elon Musk, seen above with his mother Maye at the 2022 Met Gala, recently teased Canada as a potential location for one of his new Gigafactories 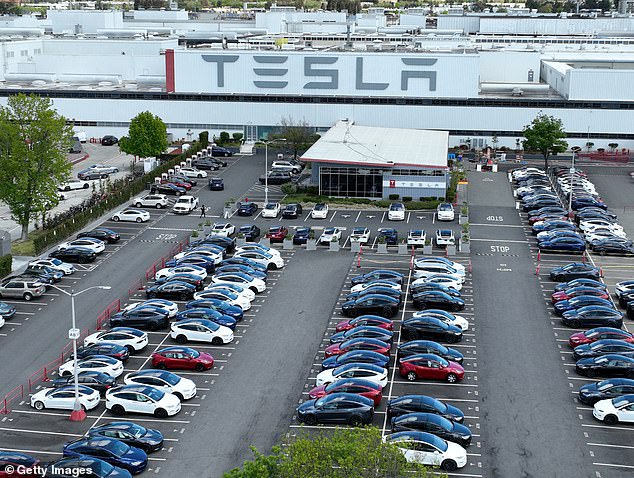 ‘We are looking at sites, but we are considering some sites options more broadly in North America, so including Canada and Mexico, and the US as well,’ Musk said. Pictured: Tesla cars sit parked in a lot at the Tesla factory on April 20, 2022 in Fremont, California

‘I’m half Canadian, so maybe I should,’ Musk jokingly told the crowd.

Another clue emerged recently. Electric Autonomy Canada reports Tesla updated its lobbying registry in July 2022 to include a new objective:

‘Engage with the government and its agencies to identify opportunities for industrial and/or advanced manufacturing facility permitting reforms with the intent to increase the competitiveness of Ontario and its ability to attract capital investment through establishing approvals timeframes that are competitive with high-growth manufacturing locations in North America, while also working with government to identify or align incentives programs that could further increase the attractiveness of Ontario for industrial and/or advanced manufacturing investment.’

That sounds like a company that could be laying the groundwork for something new. Electrek reported in November that Tesla was in talks with the Quebec government to make a multi-billion dollar investment into a battery production facility in the province. 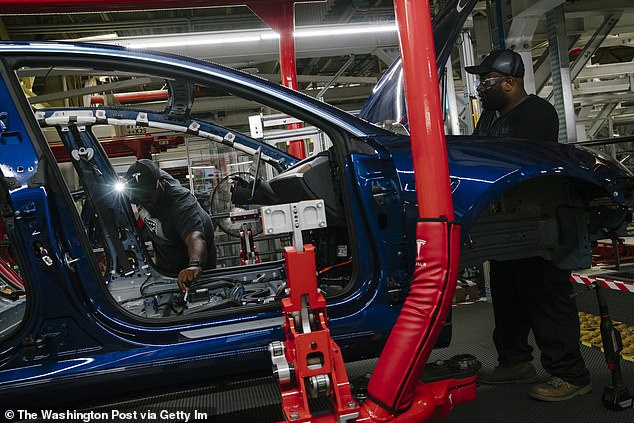 Telsa ultimately plans to build 10 to 12 gigafactories ultimately. Each one would have an average output of about 1.5 to 2 million units. Damien Boozer and Paul Jacob work on the general assembly of the Tesla Model 3 at the Tesla factory in Fremont, California

However, Musk has said that Tesla needs to do a lot to ramp up production at its existing factories in Berlin and Austin.

‘There’s a host of problems. None of the problems are individually all that difficult. But there’s like 10,000 of them. The rate of production is like how fast can you solve the 10,000 problems—essentially. And we’re solving them fast, but a lot of work to do,’ the mogul explained.

The world’s wealthiest man has said that his factories are ‘losing billions of dollars’ due to supple chain chaos and battery shortages.

‘This factory is losing insane money right now,’ he explained to members of a club of Silicon Valley Tesla owners in Austin in a June interview. ‘We should be operating a lot more cars from this factory versus a very puny amount of cars.’

‘Both Berlin and Austin factories are gigantic money furnaces right now. Okay? It’s really like a giant roaring sound, which is the sound of money on fire,’ he told published Wednesday.

Musk said Tesla’s Texas factory produces a ‘tiny’ number of cars because of challenges in boosting production of its new ‘4680’ batteries and as tools to make its conventional 2170 batteries are ‘stuck in port in China.’

‘This is all going to get fixed real fast, but it requires a lot of attention. It will take more effort to get this factory into high line production than it took to build it in the first place,’ he said.

Telsa ultimately plans to build 10 to 12 gigafactories ultimately. Each one would have an average output of about 1.5 to 2 million units.

Tesla’s latest Gigafactory in the United States is located in Austin, Texas near the Colorado River.

The factory covers 2,500 acres with over 10 million square feet of factory floor and will be a manufacturing hub for Model Y and future home of Cybertruck.