New footage has emerged showing the moment a Tesla electric vehicle driving on Autopilot crashed into the back of a truck in California earlier this month.

The driver posted the video online, describing in a summary of the footage the moment when the unknown model Tesla experiences the Autopilot failure on January 13 while driving in Milpitas, in the San Francisco Bay area.

The footage, posted on Rumble.com, shows the vehicle moving slowly in heavy, ‘stop-and-go’ traffic behind a car carrier truck.

Scoll down for video 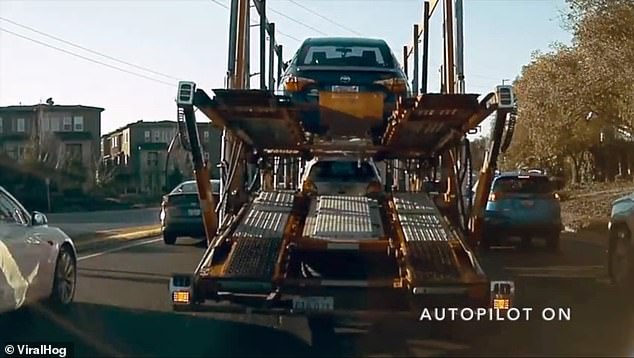 While driving in Milpitas, the Tesla inched closer to the car carrier truck 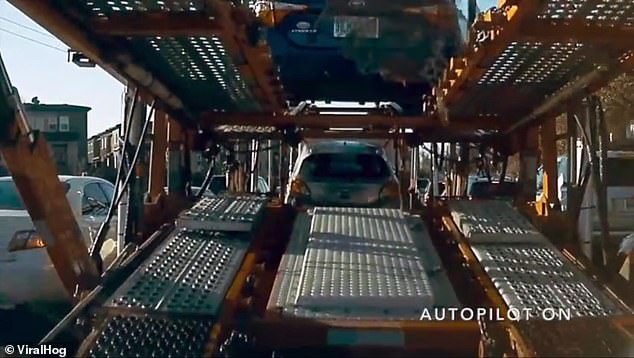 The footage, posted on Rumble.com, shows the vehicle moving slowly in heavy, ‘stop-and-go’ traffic behind the truck, stopping for a moment before the collision takes place 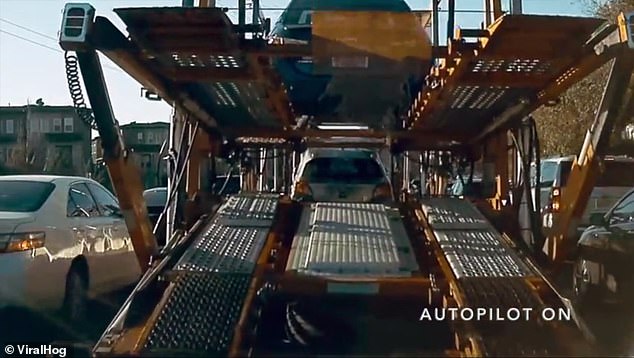 The driver writes in the summary posted with the video that the collision resulted after ‘cameras, radar, and sensors’ that the auto pilot relies on ‘suddenly ignored the giant semi’

The driver writes in the summary posted with the video that the vehicle was only only going about 10 miles-per-hour and that the ‘Autopilot’ distance was set to three car lengths.

The driver writes that the collision resulted after the ‘cameras, radar, and sensors’ the Autopilot relies on ‘suddenly ignored the giant semi’.

A report was made to the EV maker, the driver said. A Tesla spokesperson did not immediately respond when DailyMail.com reached out.

Drivers have reported several similar problems with auto pilot. A federal probe into a 12th Tesla crash in December, that was believed to be tied to the auto pilot system, which already had been blamed for four fatal accidents.

The National Transportation and Safety Board found that the truck driver’s failure to yield the right of way and a car driver’s inattention due to overreliance on vehicle automation were the probable cause of the crash.

The most recent deadly crash happened in March in Delray, Florida, when Jeremy Banner’s 2018 Tesla Model 3 slammed into a semi-truck, killing the 50-year-old driver.

NTSB investigators said Banner turned on the Autopilot feature about 10 seconds before the crash, and the Autopilot did not execute any evasive maneuvers to avoid the collision.

The three other fatal crashes date back to 2016.

Tesla, on its website, calls Autopilot ‘the future of driving’.

Other videos have surfaced revealing the technology’s glitches.

Footage posted on Reddit in March shows a driver having to take over the wheel of the vehicle because it kept veering towards a metal barrier while driving on Autopilot.

Other videos have shown Teslas on Autopilot working with other on-board systems to avoid calamity.

A Tesla owner in November posted video showing his vehicle’s Autopilot detecting a group of ducks crossing the street and automatically swerving to save the unsuspecting animals.

In footage captured from a TeslaCam, the vehicle’s integrated dashcam feature, the owner of a Tesla Model 3 is cruising down an empty roadway on Autopilot.

The vehicle easily navigates the obstacle-devoid highway at a steady speed, demonstrating the Tesla’s ability to travel lengths without human direction.

Using one of the eight cameras used to detect incoming objects, the Tesla quickly swerves to the right and barely misses the waddling group.

Instantly, the car readjusts itself into the correct lane and continues to drive without any apparent incidents.

The driver of the vehicle from the latest video footage showing the Tesla striking the rear of the car carrier truck said that the Autopilot feature had been used on the vehicle without fail for 20,000 miles with ‘no incidents’ before the collision.