Elon Musk, the founder of electric car maker Tesla, has agreed an extraordinary pay deal worth up to £40billion over ten years.

The potential pay out would be by far the biggest deal in corporate history.

It will be tied to Tesla’s stockmarket value – which recently overtook GM Motors to become the most valuable car manufacturer in the US.

The founder of electric carmaker Tesla, Elon Musk, has agreed an extraordinary pay deal worth up to £40billion over ten years

But in order to receive the maximum pay out of around $55billion (£39billion), Tesla will have to become six times bigger than German car giant Volkswagen over the next decade.

Currently Tesla has a stockmarket value of around £43billion, with Mr Musk’s 22 per cent stake worth more than £9billion.

It will then have to rise to a staggering £465billion over the next decade for him to be eligible for the maximum pay out.

Even then Mr Musk – whose sprawling business empire also includes a space company – will also have to hit twelve revenue and profit targets.

If he misses them, he gets nothing.

In order to get the money Mr Musk will also have to remain in post as the company’s chief executive and chief product officer at the end of the ten year period. 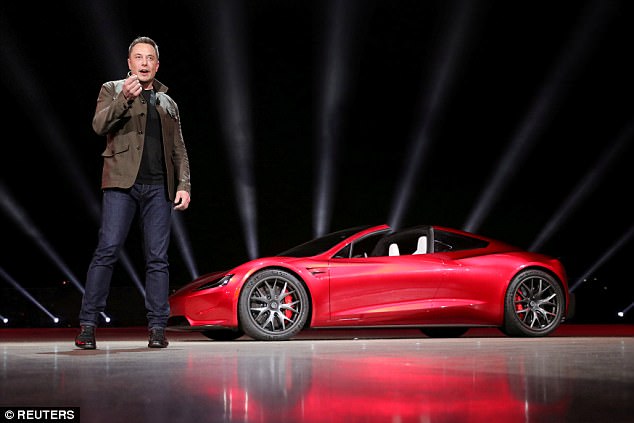 Currently Tesla has a stockmarket value of around £43billion, with Mr Musk’s 22 per cent stake worth more than £9billion

The plan need to be signed off by shareholders, many of whom could also become rich under the bonus scheme.

Although the staggering award will be frowned on by many, it also highlights the sheer scale of Mr Musk’s ambition.

‘No one has ever paid out this kind of money – it’s off the scale. Elon Musk is living in a dreamworld. But I think it is fantastic that he is laying on the line and that this bonus scheme is based on loyalty and growth of the company. He has to get real though.

‘Tesla may have been first out of the blocks with electric cars but car giants like VW, BMW and Nissan are all competing and will produce and sell them significantly more cheaply.’

Tesla, which was founded in 2003, continues to lose money.

The firm is pinning its hopes on its first mass market, affordable car – the Model 3 Sedan.

But it has struggled to boost production and has churned out a fraction of the cars as it had pledged to build.