Now that’s an electric moment at the racetrack.

A Tesla Model X has beaten a Lamborghini Aventator SV in a quarter-mile drag race at the Palm Beach International Raceway in Florida, edging out the more expensive competitor by a split second.

The race, set up and filmed by the drag racing blog DragTimes, pitted Elon Musk’s electric SUV against the Italian supercar.

True to form, the race was delayed at first when the Model X had to finish charging.

When the race began, the Model X, equipped with Ludicrous Mode, zipped silently out of the gate well ahead of the roaring Lamborghini.

The Lamborghini made up ground down the stretch, but not in time, and the Model X crossed the finish line .05 seconds faster.

In the process, the Tesla set a quarter-mile time record for SUVs, at 11.418 seconds. 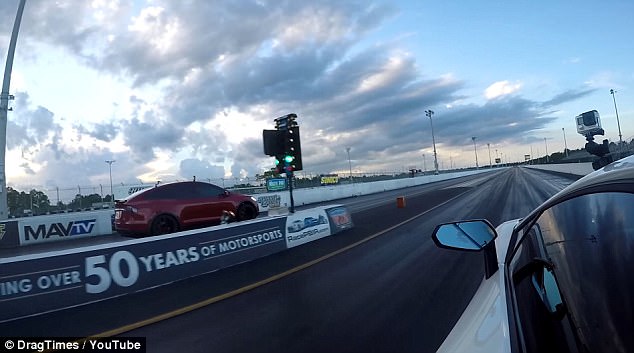 The Model X crossed the starting line more quickly than the Lamborghini after the light went green, explaining why it beat the Lambo despite having a longer elapsed time The Lamborghini hit a higher top speed by the end of the quarter mile, but it wasn’t enough to make up for the slower acceleration at the start

Lamborgini fans may quibble with the results though, and not without reason.

Although the Model X did win the race, the Lamborghini posted a shorter elapsed time of 11.281 seconds for the race – the time between crossing the starting line and the finish line.

That means the Tesla driver had a slightly quicker reaction time when the starting light went green. 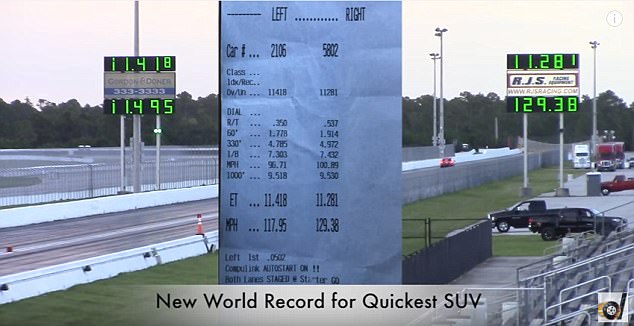 The race times show that the Lamborghini (right column) had a slightly faster elapsed time (ET) than the Model X, meaning the Tesla driver had a quicker reaction time out of the gate