Panasonic said output at the $5 billion battery ‘Gigafactory’ it runs with electric vehicle maker Tesla Inc could soon increase as the causes of bottlenecks that have hobbled production are now understood.

Tesla earlier this month blamed manufacturing bottlenecks for limiting quarterly production of its mass-market Model 3 sedan to 260 vehicles rather than its 1,500 goal.

With production underway at the Gigafactory, the company is churning out lithium ion battery cells by the masses in hopes to ultimately reduce the cost of sustainable energy

Panasonic Chief Executive Kazuhiro Tsuga said at an earnings briefing that delays to the automation of the battery pack production line meant some stages had to be completed manually.

‘This process (for battery packs) will be soon automated, and then the number of vehicles to be produced will rise sharply,’ Tsuga said.

He declined to comment to what extent Model 3 production would be behind its targeted schedule.

It maintained its 335 billion yen ($2.96 billion) forecast for the year ending March.

On Tuesday, Tsuga acknowledged the bottlenecks could impact earnings, but said the contract with Tesla was designed to hedge various risks. He also said battery businesses with other clients are profitable.

Panasonic sees batteries as central to its plan to nearly double automotive business revenue to 2.5 trillion yen by the year through March 2022.

Tesla’s ‘Gigafactory’ is located on Electric Avenue in Sparks, Nevada. 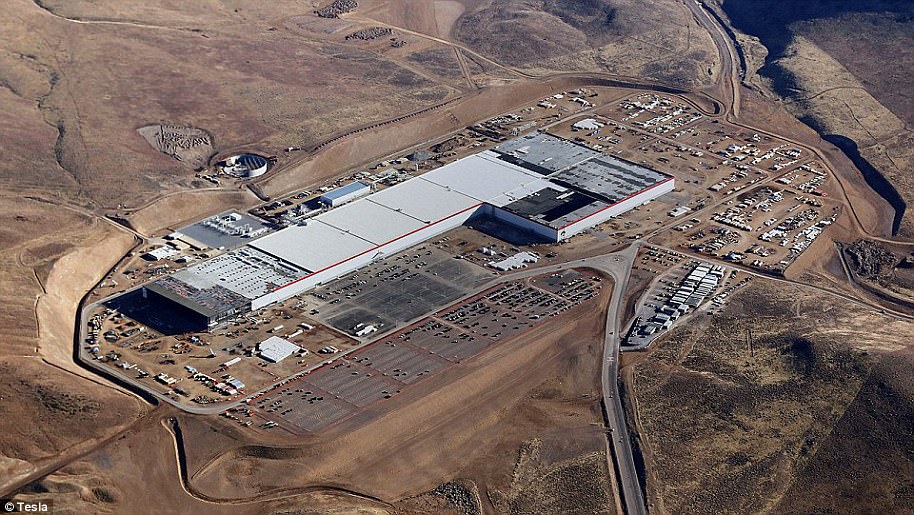 Once completed in 2020, the factory is set to become one of the biggest buildings in the world, with a final size of 10 million square feet

Tesla says the factory will be producing 35 gigawatt hours of batteries by 2018.

Once completed in 2020, the factory is set to become one of the biggest buildings in the world, with a final size of 10 million square feet.

‘We are still less than 30 percent done, and once complete, we expect the Gigafactory to be the biggest building in the world,’ Tesla said.

To that end, it has been aggressively expanding battery production capacity globally.

It plans to start production this financial year ending March at a new plant in Dalian, China, and is adding production lines in Japan – steps that could allow it to reduce dependence on Tesla.

Toyota and Honda, already customers of Panasonic batteries, were seeking ways of procuring batteries in China, Sato said, as the government in the world’s largest automobile market promotes electric vehicles as a means of combating pollution.

‘Panasonic’s decision to produce batteries in China has solved their problems,’ Sato said.