Tess Daly turned up the heat on Friday as she took to Instagram to share a jaw-dropping series of shots, where she frolicked in a skintight swimsuit in her garden.

Showing off her slim physique in the grey asymmetrical number, the 52-year-old flashed her toned pins while sprawling upside down on a sunlounger.

The TV presenter shot a beaming smile towards the camera and stretched her hands out and above her head.

Hot stuff: Tess Daly, 52, put her toned physique on display in a skintight swimsuit as she frolicked up a storm in the garden of her £1.7m home on Friday in an Instagram post

She framed her face with a pair of oversized sunglasses and accessorised her wrist with a delicate gold bracelet.

In another shot, the Strictly Come Dancing host dipped her bronzed legs into the swimming pool at her £1.7 million Buckinghamshire mansion.

Smiling down at her fabulous legs, Tess sported a satin turquoise dress which gave a glimpse of her bikini worn underneath.

The novelist wore her gorgeous blonde locks in a middle-parting, which cascaded in waves over her shoulders. 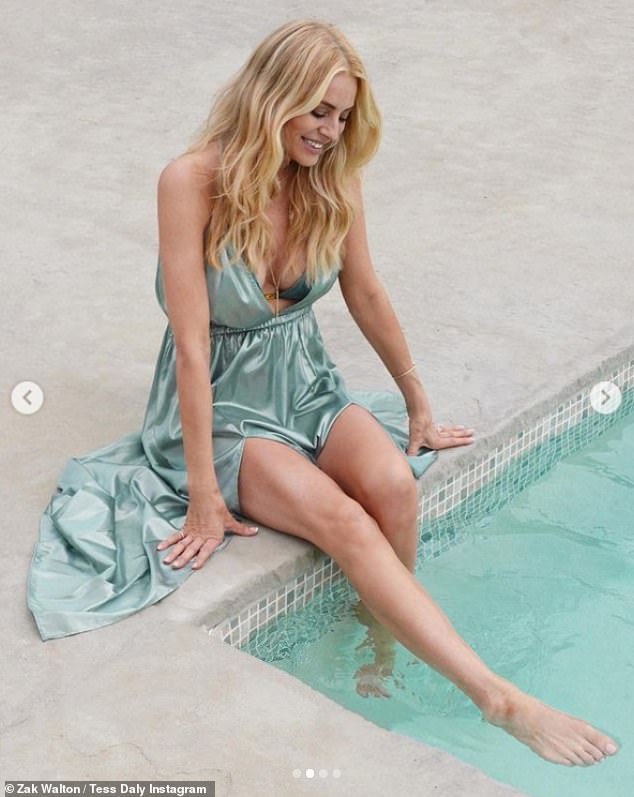 Woah! Tess turned up the heat with the jaw-dropping series of shots – giving a glimpse of her bikini underneath a green shimmering dress 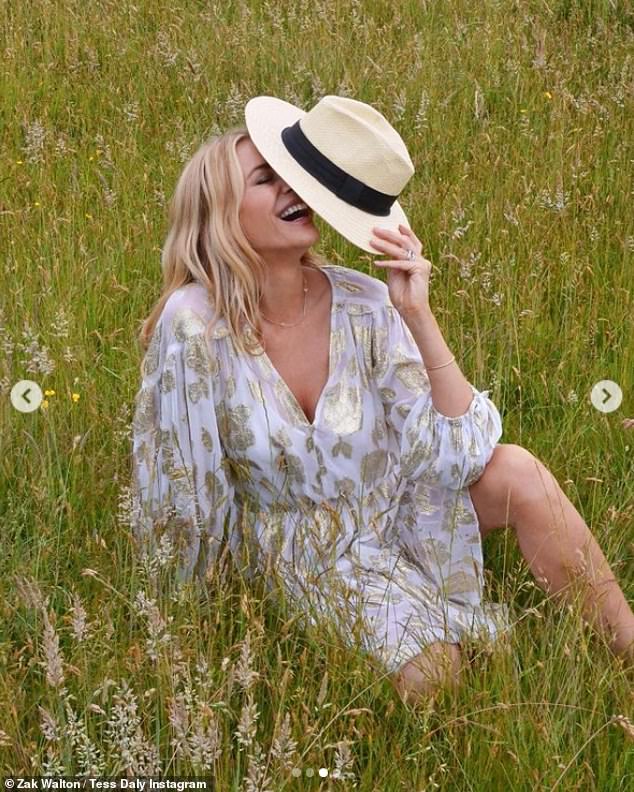 Giggles: A further snap showed the age-defying beauty embracing country life while giggling into her straw hat while lounging in a field

A further snap showed the age-defying beauty embracing country life while lounging in a field and giggling into her straw hat.

She wore a very low-cut lilac kaftan, which has been detailed with gold prints.

Sporting a pair of aviator sunglasses, the model looked radiant as she continued her sun-soaked afternoon of Vitamin D.

The mother-of-two donned a plunging brilliant-white top, which featured a ruffled neckline. 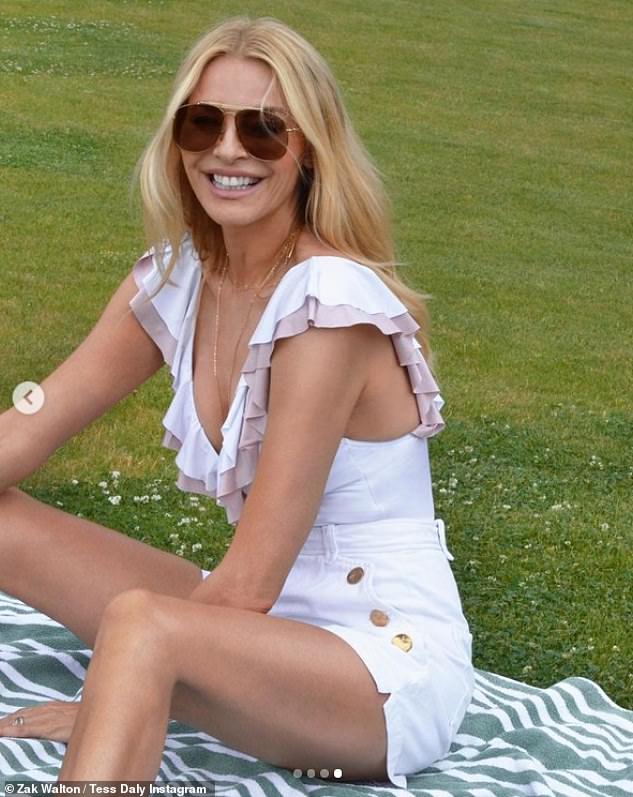 Sizzling: The mother-of-two donned a plunging brilliant-white top, which featured a ruffled neckline 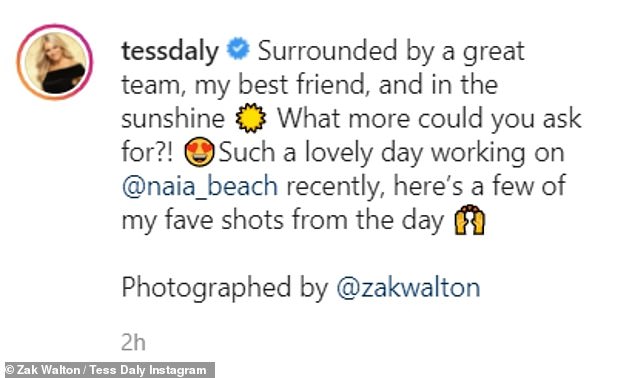 Fun day: She penned this caption to accompany the snaps

Tess paired the number with a gold button-enhanced skirt in the same colour and continued to look ever-happy in the final shot.

She wrote in the caption, ‘Surrounded by a great team, my best friend, and in the sunshine ☀️ What more could you ask for?!

‘Such a lovely day working on @naia_beach recently, here’s a few of my fave shots from the day. Photographed by @zakwalton’ 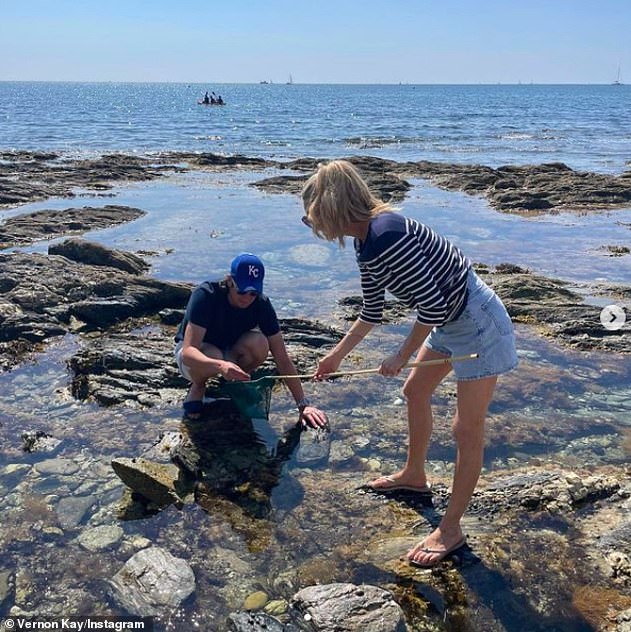 Sweet: Husband Vernon Kay took to Instagram last week to share memories of a sun-drenched staycation on the Cornish coast with Tess and their two daughters, Phoebe and Amber

The slew of snaps come not long after husband Vernon Kay, 47, took to Instagram to share memories from the coupke’s recent staycation on the Cornish coast with their daughters Phoebe, 16, and Amber, 12.

The TV presenter looked in full-on holiday mode on Friday in Falmouth as he posed with his hands on his hips as he stood in the azure blue sea.

His surroundings looked as if they could have been abroad as he donned a blue cap on top of his grown out brown hair, paired with sunglasses, a navy blue T-shirt and white board shorts, before he then shared a long-distance snap of his girls. 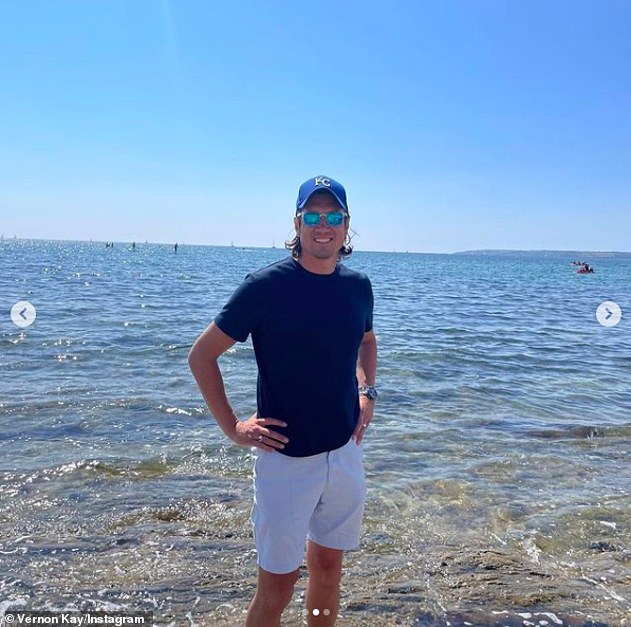 Holiday mode: His surroundings looked as if they could have been abroad as he donned a blue cap on top of his grown out brown hair, paired with sunglasses, a navy blue T-shirt and white board shorts

Good times: Vernon continued to enjoy his time on the Cornish coast with lots of activity

In another photo, Vernon and Tess made the most of the nice weather as they were on the look out for wildlife in the rock pools of the beach.

The former face of Danone made sure to look the part as she opted for a nautical style long sleeved blue and white striped top.

In full summer mode, she showed off her slender legs were as she wore blue denim shorts and flip flops, enjoying the quality time with Vernon. 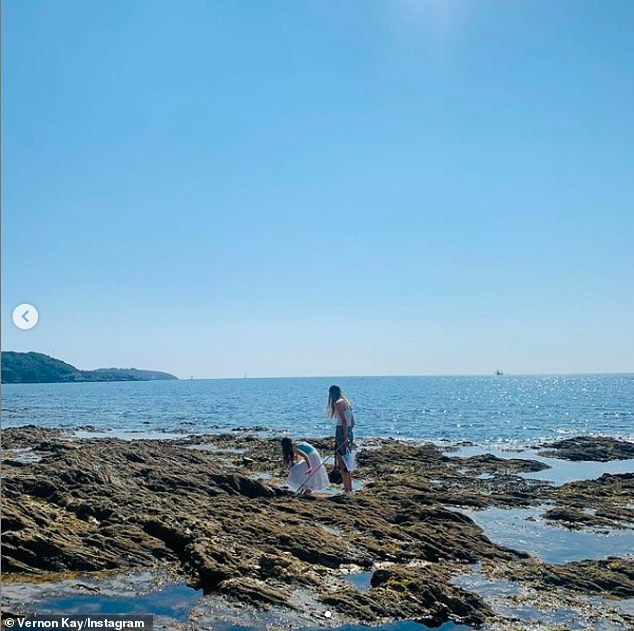 Pretty: In the last of the snaps, he shared a photograph of his two daughters from afar, also partaking in the same activity

She carried a net for her husband as he grabbed the animals and put them in, for the family to explore.

In the last of the snaps, he shared a photograph of his two daughters from afar, also partaking in the same activity.

The two of them looked summery as they wore long flowing skirts. 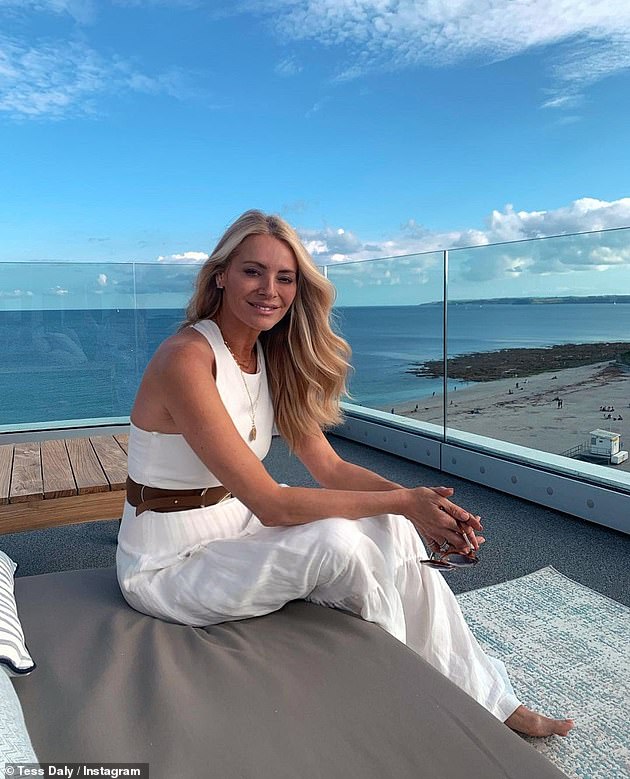 Radiant: Tess showed off her summer glow on Instagram on Thursday as she posed by the Cornish waters in a chic white ensemble