Debby was the wife of ITN’s charismatic foreign correspondent Brent Sadler. Tess Stimson was the ‘other woman’ he left her for. Cue a sensational feud played out in the national press. You won’t believe what happened next, as Tess reveals here… 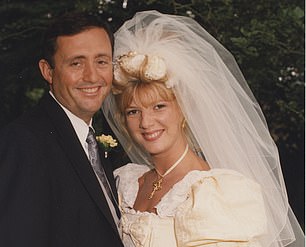 Debby with Brent at the christening of their daughter Brooke in 1988 (left), Tess with Brent on their wedding day in 1993. Both women admit that he clearly has a type

The first time I set eyes on Debby – the woman who was at that point married to my new fiancé – I’d just stepped out of the shower of a five-star London hotel.

I remember towelling my hair dry, feeling happier than I’d ever been. My boyfriend, ITN reporter Brent Sadler, had gone down to reception to pick up an urgent fax from work. I was admiring the sapphire and diamond ring he’d just put on my finger when I heard a knock at the bedroom door. Assuming Brent had forgotten his room key, I opened it, still dressed in my fluffy bathrobe.

But it wasn’t Brent standing there – it was his wife Debby. I’d never met her before, but I recognised her instantly from photos. ‘My husband’s come to pick up his things,’ she said, coolly pushing past me. I was too shocked to say a word. I watched in humiliation as Brent scurried in behind her, his tail between his legs. ‘By the way, whatever he’s told you, we have a fantastic sex life,’ Debby said, and swept out of the room.

I felt as if the breath had been knocked out of me. I had no idea Debby was still in the picture. Brent, then 41, and I had met just six weeks earlier, on my 21st birthday, in July 1991. He’d told me he was legally separated from Debby, then 31, a former air stewardess, and asked me to marry him just four days after we met. I quit my job as a TV producer on News at Ten, and moved with Brent to Cyprus, where he was ITN’s Middle East bureau chief. 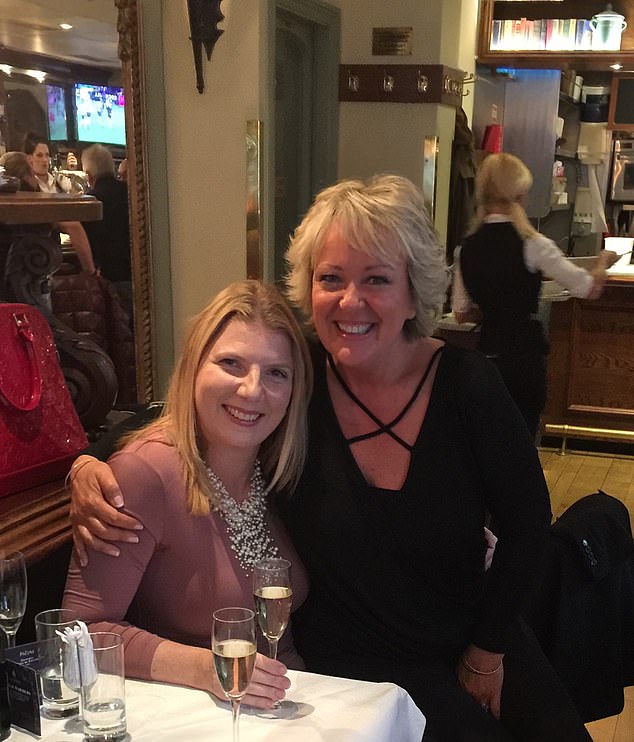 We returned a month later to London to make wedding plans, as he’d reassured me his divorce would come through any day, and checked into Le Méridien hotel in London’s Piccadilly. But someone at ITN told Debby where we were, and she got a taxi straight to the hotel to reclaim her husband. Brent couldn’t even look at me as she threw his clothes into a suitcase. It’s a moment Debby and I laugh about now, nearly 28 years later, during our regular girlie get-togethers for champagne and cocktails. Both now long divorced from Brent, who is 69, we are – astonishingly – the best of friends, despite our very rocky start.

It’s impossible not to giggle when Debby does an uncannily accurate imitation of Brent’s face when his shabby double life was exposed during that hotel encounter. I’d almost feel guilty about making fun of him – except he treated us both very badly, and we deserve to congratulate ourselves for making something good come out of the wreckage.

So how on earth did the two of us end up friends? After all, I was the ‘other woman’, even if I didn’t know it at first. But instead of dumping Brent, as I should have done after that hotel encounter, I believed him when he said he loved me and agreed to carry on seeing him behind Debby’s back while he finished negotiating a new contract with CNN. Once that was done, he left her and his daughter without a backward glance, and we returned to Cyprus, where Brent was CNN’s new Middle East correspondent, to start our life together.

Brent and I had a huge wedding in July 1993, covered by Hello! magazine, and Brent’s daughter from his first marriage, Nicola, was my bridesmaid. Brooke, his daughter with Debby, wasn’t even invited. I should have been alerted by his callousness, especially as this was Brent’s second divorce, but he swore Debby only wanted him back because of the huge salary CNN was now paying him, and it was best to make a clean break.

How on earth did the two of us end up friends? After all, I was the other woman

Brent’s first marriage in 1972, to his childhood sweetheart Janis, a petite brunette, lasted only a few years. She still lived in their old home in Bristol with their daughter Nicola, then 17. On the few occasions we met, we got on. But his second marriage, in 1985, to Debby was different, because she and Brent had had a fiery, passionate relationship from the start. Brent travelled extensively for ITN, and Debby had no choice but to build a life that didn’t include him, which often made him jealous. Their marriage was in trouble long before Brent and I met, but Debby was determined to make it work because of Brooke.

In June 1991, while Brent was away on an assignment, she went to Canada to visit friends and think things through, but by the time she came home a month later, Brent had met me. She was hurt and furious, and naturally fought back, coming to the hotel to reclaim him.

When he left her, she branded him a ‘love-rat’ in the newspapers, and I cruelly dismissed her as ‘an irrelevance, just one more bill on our list’. Unsurprisingly, she retaliated in kind, saying I had ‘a bad reputation for stealing husbands’ – which was totally untrue – and ‘a laugh like a hyena’, which stung. I hated her for tarnishing my fairytale romance and making me look like a home-wrecker.

In 1994, six months after our marriage, I became pregnant with our first baby, Henry, now 24. I was elated but deep down I kept wondering if Brent would leave me, too. When he threw out all his photos and videos of Debby, determined to erase her from his life, I secretly saved them, poring over them and studying whether he looked happier with her compared to me. 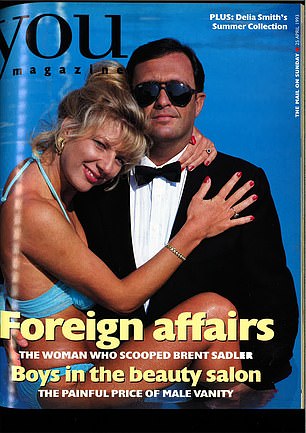 Then, in 1997, when I was pregnant with our second son Matt, now 21, I discovered Brent was having an affair with his 25-year-old Serbian translator Jelena. In July 1999 we finally separated on my 29th birthday, eight years to the day since we’d met. Now I understood how Debby had felt. I knew I owed her an apology for not leaving Brent once I’d found out that he was married, and for retaliating in the newspapers when she was going through a painful break-up and was naturally angry. But I didn’t think she’d want to hear from me. We had never spoken again after that day in the hotel, but I was sure she hated me as much as ever.

Then, in 2014, I was cleaning out my attic when I found the box containing all those old photos of Debby and their daughter that Brent had wanted to get rid of. I was about to throw them out when something stopped me. I knew Brooke, now 30, didn’t have a single picture of herself with her dad. For 22 years, he’d never even bothered to contact her. Those photos were all she had of him. Nervously, I contacted Debby on Facebook and to my astonishment she sent me a warm reply thanking me profusely for saving the photos. For several months, we messaged each other, before arranging to meet.

With wry humour, Debby suggested Langan’s Brasserie in Mayfair, where she and Brent had celebrated their wedding reception and where she’d later hosted her divorce party. Despite our friendly emails, I was secretly scared she might chuck a glass of wine in my face, or worse.

But the moment we saw each other, it felt as though we were old friends. We were both hugely curious to know the other side of the story. As soon as we compared notes, we realised how much we’d both been deceived by Brent. I apologised for my role in the break-up of her marriage, and Debby reassured me it was all in the past. She’d resented me when Brent and I got together, but her main concern was always for her daughter. The fact I’d saved those photographs meant the world to her.  As a mother myself, I found Brent’s treatment of Brooke unforgivable. Whatever his issues with Debby, his little girl had done nothing wrong. 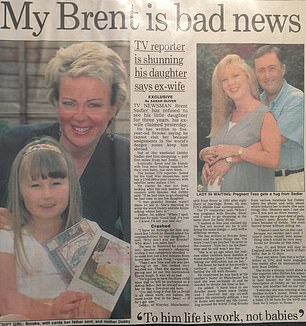 Debby and Tess vented their anger against each other in print

Talking to each other was a unique kind of therapy. No one else understood what it was like to be married to a man like Brent. In common with many TV personalities, he required a massive support system, needing to be the centre of the domestic universe. Everyone else’s life had to be put on hold when he was around. Debby gave up her job as an air stewardess, and I quit work for ITN to pursue a writing career that fitted around Brent’s schedule.

But as soon as we’d each had a baby, and couldn’t spend all our time catering to his whims, he looked for someone younger who would. He travelled for ten months a year, but got jealous when we created a life that didn’t include him. We both shared instances where he’d raged because we’d thrown parties while he was away. He had difficulty with Debby and me keeping in touch with friends from before our marriages, and seemed to try to drive a wedge between us and our parents. Living in a foreign country, cut off from everyone while he travelled all the time, was incredibly isolating. It made us vulnerable to his moods, and dependent on staying in his good books.

For years, despite Brent’s affair, I’d blamed myself for the breakdown of my marriage, thinking if I’d been more attentive and hadn’t focused on the boys so much, maybe he wouldn’t have left. But talking to Debby, I realised there’s nothing I could have done. Brent couldn’t bear sharing the limelight with anyone, including his own children. Our marriage was doomed the moment I had our boys and he stopped being the centre of my world. Debby and I also traded stories about his annoying habits, such as taking off his trousers as soon as he came home and sitting on the sofa in just his shirt, socks and underpants. And of course we talked about what he’s like in bed!

We traded stories about his annoying habits. And, of course, what he’s like in bed!

I’ve long since forgiven Brent for his behaviour, but for Debby the wounds run deeper because of the way he’s treated Brooke. My short marriage to Brent matters now only because it gave me my boys. For the past 18 years, I’ve been happily married to my second husband, Erik Oliver, 48, with whom I have a daughter, Lily, 16. Debby’s never remarried; she says once was enough for her, but she has no shortage of admirers if she ever changes her mind.

By the end of that first lunch, we felt like we’d known each other for years, rolling out of Langan’s after five hours and four bottles of champagne. Since then we’ve met up whenever we can, and are in regular contact. Our bond is deeper than an ordinary friendship because of our shared history, and having children with the same man makes us family in a way – I call Debby my ‘wife-in-law’. We’re similar in other ways, too – we both love travelling, taking chances and living life to the full. Brent clearly has a type, since we even look similar. I know from mutual friends it drives Brent crazy that Debby and I get on so well, which we both find hilarious. His ears must burn every time we get together!

Best of all, I’ve learnt an important lesson. Forget waging war on any wives who went before – or after – you. Trust, loyalty, fun and friendship are far more important than revenge, and can be found in the unlikeliest of places.