Tessa Thompson wore an angelic all-white ensemble and a colorful ‘Pride’ outfit on Monday while promoting her projects in New York City.

Tessa started out on Good Morning America in a vibrant multi-color jacket with a matching skirt.

She wore a golden top underneath and completed her outfit with knee-high black-and-white striped platform boots.

Tessa reprises her role as Valkyrie in the latest installment of the Thor franchise and was asked by GMA host Amy Robach, 49, at the start of their interview about the filming process and use of improvisation among the cast.

‘We do a lot of improv. I want to say thank you so much for having me. It’s so exciting to be here. I’ll say it’s a complicated time to be talking about the film. Especially with the news as it pertains to Roe v. Wade during this time,’ Tessa said.

‘At first I was feeling despondent and then I felt really inspired and activated to fight. So in some ways it’s perfect that I’m here talking about my character Valkyrie who is a fighter, who fights not just for her sisters, but for her community, which is what we need to do now,’ Tessa said.

Pride outfit: The 38-year-old actress started out on Good Morning America in a vibrant multi-color jacket with a matching skirt 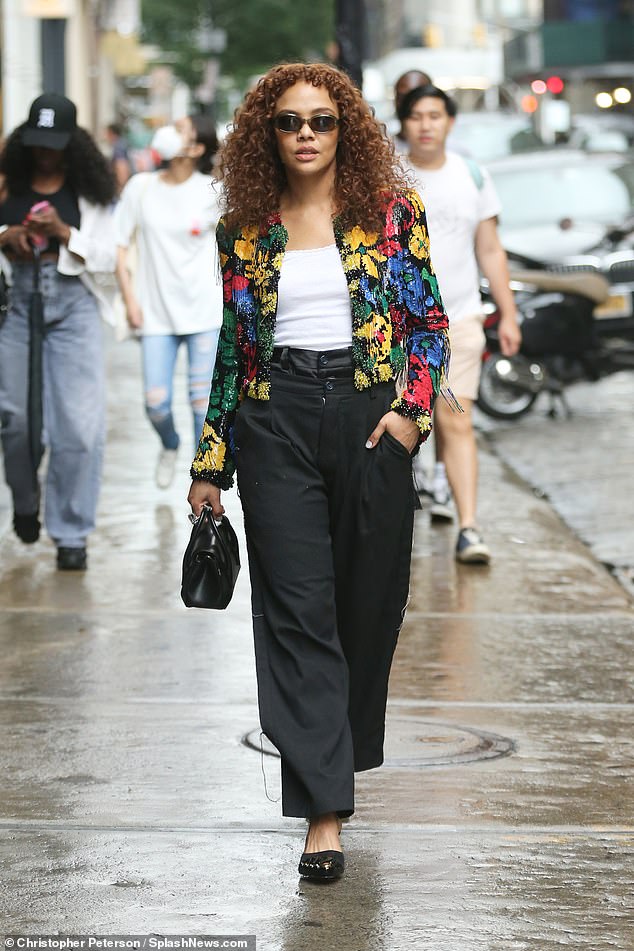 Pants also: She switched into black pants while wearing the vibrant jacket 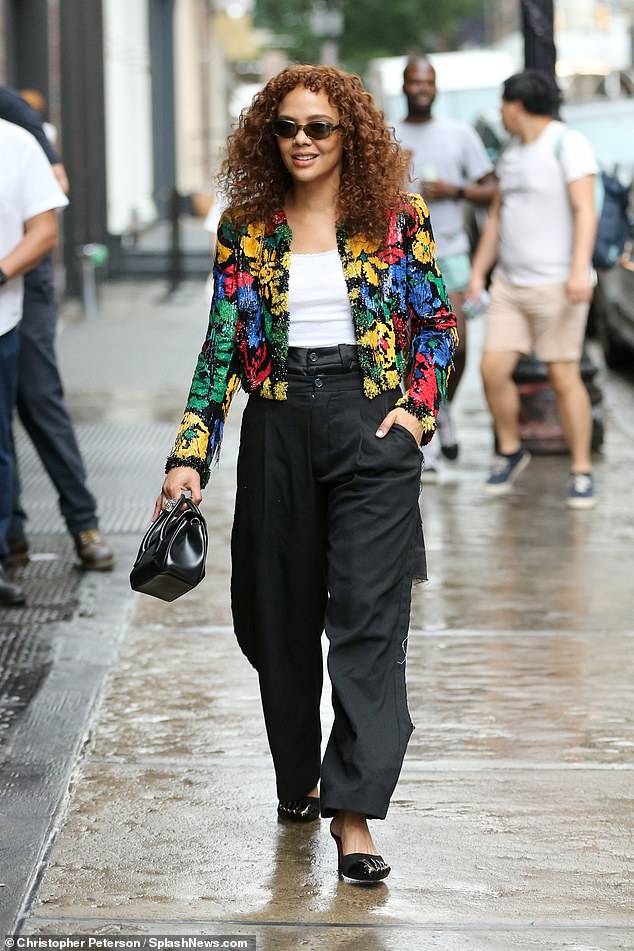 Fan favorite: The fan favorite flashed her cute smile while walking in the SoHo area

She gushed about working with Natalie Portman, 41, and said they do ‘a lot of improvisation with these movies, which is so fun.’

Tessa also revealed that she likes goats and was excited that goats were included in the film by director Taika Waititi, 46. 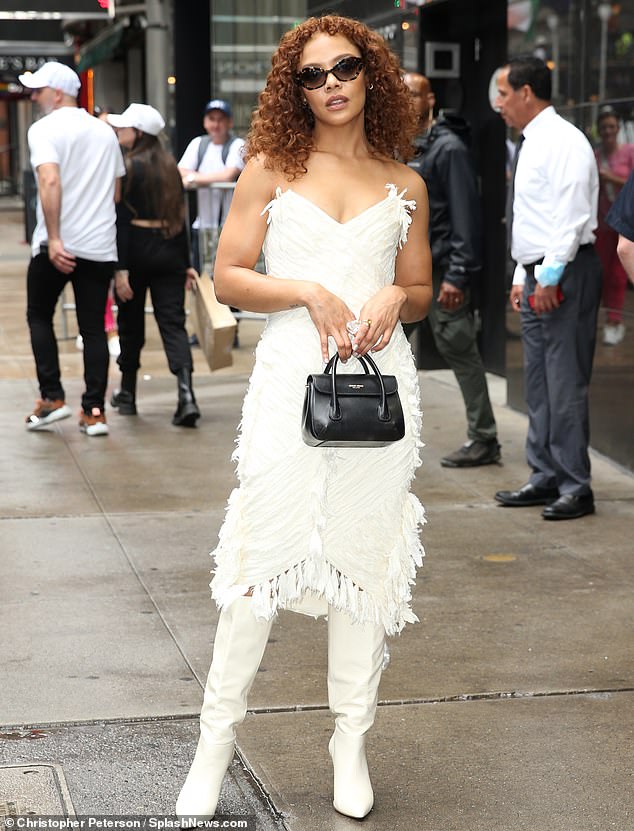 Angelic outfit: Tessa later wore an all-white outfit her her appearance on GMA3

Tessa also promoted her other upcoming sequel Creed 3 starring Michael B. Jordan, 35, who is also making his directorial debut with the film.

‘Thanks so much. Happy Pride everyone! I’m wearing my Pride outfit,’ Tessa said at the end of her interview in light of LGBT Pride Month.

She later switched into an all-white outfit that included a strapless dress that showed her toned arms for her interview on GMA3 with hosts Amy, T.J. Holmes and Dr. Jennifer Ashton, chief medical correspondent for ABC News and GMA. 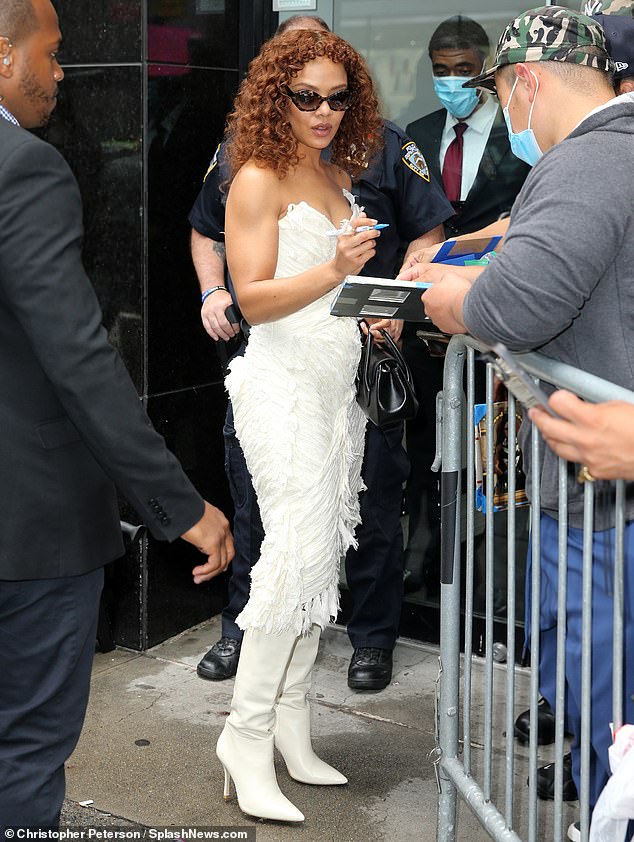 Autograph session: The star stopped to sign autographs for fans

She admitted during her interview that she doesn’t like to exercise, but enjoys getting in shape for movies.

Thor: Love And Thunder will released in theaters in the US on July 8. 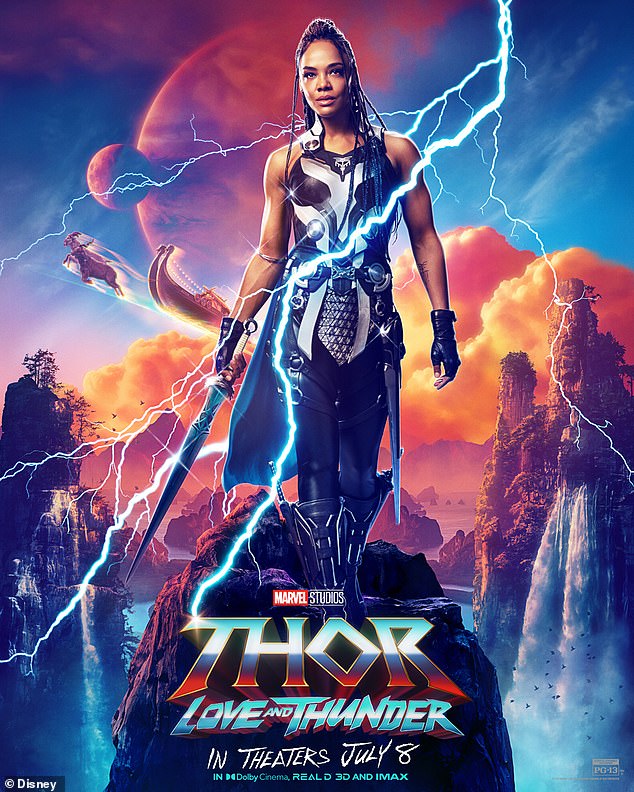 Coming soon: Thor: Love And Thunder will released in theaters in the US on July 8