Scientists have developed a test which can predict whether the deadliest skin cancer is likely to spread or return.

The test, AMBLor, provides all those diagnosed with stage one melanoma with more accurate information about their prognosis.

It could be available for widespread use in two years, saving patients’ worry and the NHS millions of pounds, the developers at Newcastle University said.

Melanoma is increasing worldwide, with the number of cases in the UK soaring by 45 per cent in ten years, according to Cancer Research figures. 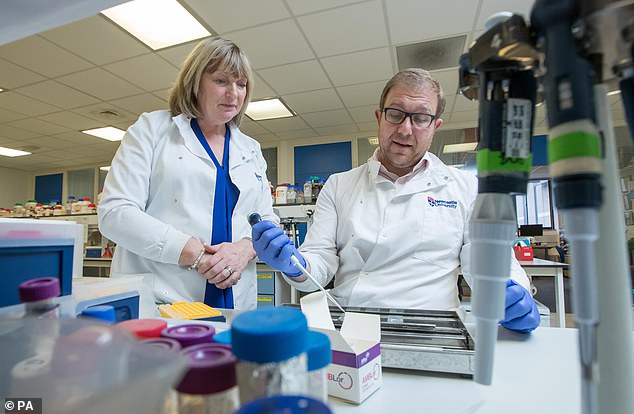 There are two kinds of protein – AMBRA1 and loricrin (AMLo) – normally found in the upper layer of the skin that may be lost in patients with early-stage melanoma.

Depleted levels of both proteins are linked with high-risk of tumours, while retained levels suggest the tumours are low-risk.

The biomarkers have been validated in studies of more than 400 patients battling melanoma and their outcomes.

AMBLor is used on a biopsy of the primary tumour after its removal, to identify the patients who have low-risk cancers.

Approximately ten per cent of people with low-risk tumours develop metastatic disease – when the cancer spreads.

The test will also enable treatment at an earlier stage for those in the high-risk group.

Tyne Tees TV news presenter Pam Royle, a well-known face in the North East, was one of the first to try it out after being diagnosed with melanoma in 2016.

The test revealed she was a low-risk patient. She said: ‘It is remarkable that patients may soon be given this information.

‘Knowing that you are low risk and that your melanoma is unlikely to spread or return will remove a lot of the worry for so many people.

‘It will also free up more NHS services to look after those who are classed as high risk and who need more treatment and care.’

Chief scientist Penny Lovat, professor of cellular dermatology and oncology at Newcastle University, said: ‘As a patient, the AMBLor test tells you if you’re in the low risk category – and can offer you reassurance.

‘It could also save the NHS up to £38million a year by reducing the number of follow-up appointments for those identified as low-risk.’

Lecturer and consultant dermatologist Dr Rob Ellis, who worked on the test, said: ‘We are working with NICE to show the value of this test to the NHS and we are currently gathering evidence to present to them.

‘We expect this to take less than two years.’

The research is published in the British Journal of Dermatology.

Some 17,000 patients are diagnosed with melanoma every year in the UK alone.

The risk of melanoma increases with age, with around half of people diagnosed aged 65 and over.

Survival rates are at a record high, but many people are failing to take preventative measures to protect themselves.