Testing times for British holidaymakers, plan drawn up for all UK nationals flying back from abroad

Ministers are considering expanding the travel ‘red list’ of countries from which British holidaymakers are required to quarantine on their return home.

It is understood Government officials met on Friday to discuss whether they should take a tougher approach to travel restrictions, the Guardian reported.

Elsewhere, another ambitious plan is reportedly being considered by ministers to get Britons back on holiday by rolling out rapid Covid tests for anyone arriving in the UK.

Under the proposed measures, countries would be designated into different tiers in an attempt to simplify the travel system amid an increase in cases across Europe.

Currently, those returning from countries on the ‘red list’ must quarantine in an airport hotel for 10 days at a cost of £1,750.

Ministers are expected to decide next week whether or not to extend the list, amid a growing number of Covid-19 cases in Europe.

The ‘red list’ – which currently involves 35 nations – will include France and Germany from Sunday.

A source said: ‘It’s getting to the point where it’s not really sustainable to not respond to that.’

They added there could be ‘quite a few additions’ to the travel list.

It comes amid proposed plans for a roll-out of rapid Covid-19 tests for anyone arriving in the UK.

The cost of the test will be around £30 which the passenger will have to pay, The Sun reports.

Unlike the travel corridor system last year, countries will be ranked from green, amber and red according to which destination is deemed to be the riskiest.

Arriving from an Amber nation requires negative PCR tests before travel, on arrival, and some form of quarantine.

Hotel quarantine will be required for anyone returning from a red list country.

However, it is not clear how ministers will decide whether a country is red, amber or green.

It is believed the system will be based on different variants within the country and vaccine rollouts, rather than relying solely on infection rates like last year.

A source told The Sun: ‘The full list of countries and their categorisation is not likely to come anytime soon. 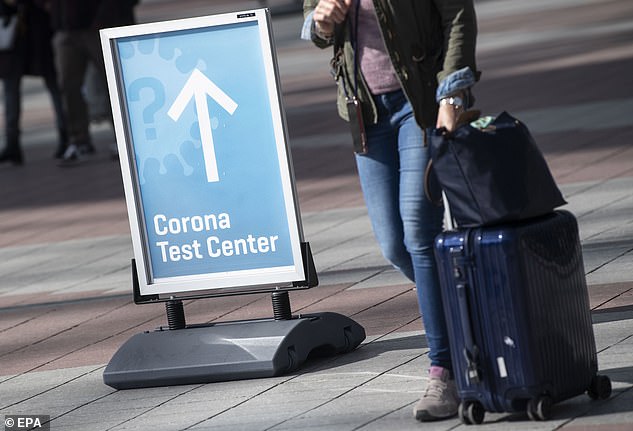 Passengers pass by a sign pointing the way to a corona test center at the Airport in Munich, Germany, on March 26

‘The situation is too volatile, especially in Europe, to make clear where destinations should be placed on the list.

‘But this will outline the thresholds required for countries to be deemed covid-secure.’

A Downing Street source told the paper: ‘We are just not in a place where we have set out what this is going to look like yet.’

It comes as Virgin Atlantic announced it would trial vaccine passports.

Customers on flights to Barbados from April 16 will be invited to use the Travel Pass app to verify they meet the Caribbean island’s entry requirements for pre-departure coronavirus testing.

A number of other airlines are also using the app, including British Airways, Singapore Airlines, Emirates, Qantas and Qatar Airways.

Virgin Atlantic chief customer and operating officer Corneel Koster said: ‘In parallel to the UK’s successful vaccination programme and accompanied by a risk-based, phased easing of restrictions, we can see a flightpath to soon allow the safe restart of international travel at scale, in time for summer.

‘Governments, industry and technology companies need to work together to lead the adoption of digital solutions with global common standards that are accepted at borders.’