His mother, Angie Hernandez, noticed something was wrong, and took her son to a local hospital in San Antonio, Texas.

Doctors told her that Bryan had an ankle sprain that would heal on his own but, after months of no progress, Hernandez demanded further tests.

A scan revealed he had a tumor in his right foot and he was diagnosed with Ewing sarcoma, a rare bone cancer, reported News 4 San Antonio.

Three months of chemotherapy failed to shrink the tumor and doctors recommended that Bryan’s foot be amputated to keep the cancer from spreading.

On Friday, Bryan had his right leg amputated up to his his mid-calf and – surprising his family and doctors – began walking on crutches less than a day after his surgery.

In March 2019, Bryan Marquez, 10, from San Antonio, Texas, started having trouble walking and was limping. Pictured: Bryan after his amputation 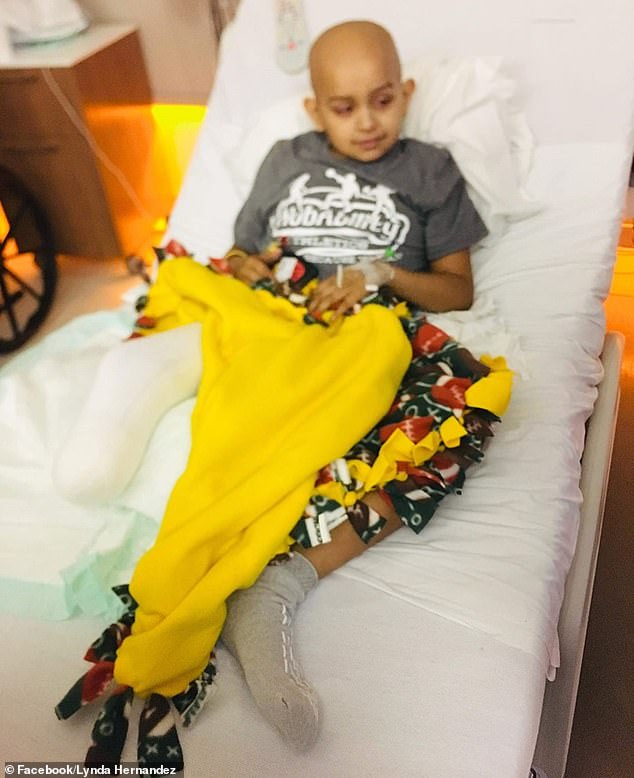 Doctors told his mother he had a sprained ankle for months until his foot didn’t ‘heal’ and she demanded they see a specialist. Pictured: Bryan in the hospital after his amputation

‘It’s a bad thing,’ Bryan told News 4 San Antonio of his cancer diagnosis. ‘No one should go through it.’

Ewing sarcoma is a tumor that most often begins in the long bones of the pelvis, legs or arms.

Symptoms include pain or swelling in the cancerous area, fatigue, fever and unexplained broken bones.

It affects around 200 children and young adults in the US every year and usually appears between ages 10 and 20.

Treatment includes surgery to remove as much of the tumor as possible, followed by chemotherapy and radiation treatments to shrink the remainder of it.

Bryan underwent three months of chemotherapy, multiple times a week, but it failed to shrink the tumor.

Doctors told his family that they believed amputation was the best course of action to prevent the cancer from spreading.

‘I’d rather have him lose his leg than his life so amputation is what it’s going to be,’ his mother, Hernandez, told News 4 San Antonio.

‘He’s very determined. I tell him like: “It’s going to be a little process. It’s like a big cut. We got to let it heal but as soon it heals, you’ll get fitted [for a prosthetic”‘.’

A tumor was found in Bryan’s right foot and he was diagnosed with Ewing sarcoma, a rare bone cancer. Chemotherapy failed to shrink the tumor, and doctors recommended that his foot be amputated to prevent the cancer from spreading. Pictured, left and right: Bryan before the amputation 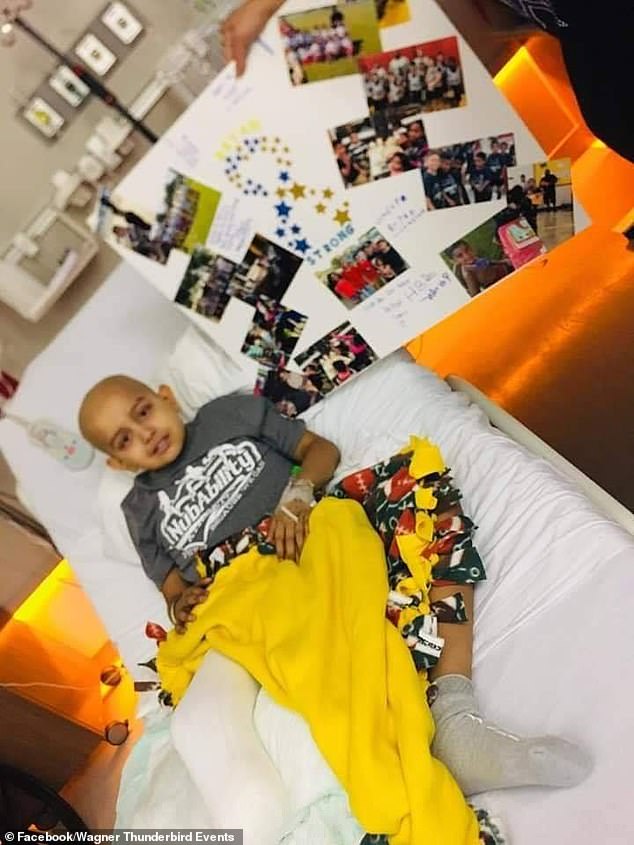 Bryan’s foot up to his mid-calf was amputated on Friday, and his mother said he was walking around just 18 hours later. Pictured: Bryan in the hospital after his amputation

Bryan currently plays football on an elementary school team and dreams of one day playing for the Dallas Cowboys in the NFL.

‘I just want to play sports. That’s all. I need to work hard,’ he told the station.

Bryan underwent his amputation on Friday, and it was a success.

His mother told News 4 San Antonio that, within 18 hours, he was out of his hospital bed and walking with his crutches.

Bryan’s family has started a GoFundMe page to help cover the cost of his medical expenses and make his home handicap-friendly.