Texas cop gets emotional note from his daughter

By Regina F. Graham For Dailymail.com

An off-duty police commander who left his home in Waco, Texas to lend a helping hand to those affected by the hurricane in Houston received an emotional and touching note from his young daughter.

Commander Scott Holt traveled with his fellow police officers and other volunteers on Monday to Houston to help after hurricane Harvey devastated the area and displaced thousands.

But before he left, Holt’s daughter, Makenna, handed him a note that made him along with his colleagues tear up.

‘Dear Daddy, I hope you don’t get hurt, but I hope you help other people that need it more than you do,’ she wrote in the hand-written note shared by the Waco police department on its Facebook page.

‘I hope no one gets hurt more. I hope everyone gets away the hurricane. I love you!’ 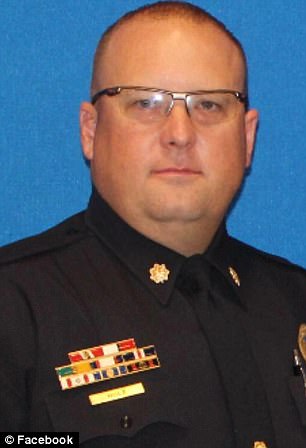 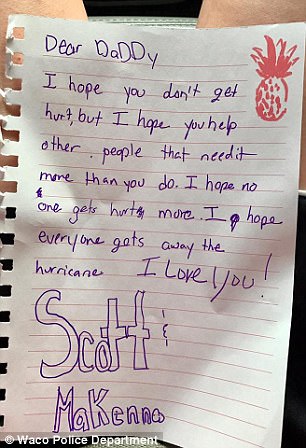 But before he left, Holt’s (left) daughter, Makenna, handed him a note (right) that made him along with his colleagues tear up as she told him she hopes he doesn’t get hurt and is able ‘to help other people that need it more than you do’

The caption on the Facebook post written by Sgt. Harry Patrick Swanton reads: ‘As our off-duty officers head into harms way to help with hurricane Harvey rescues, we thought we’d share with you one of their family members thoughts.

‘And let me say this, I know this young lady (the Officers daughter) personally and know that it took everything that her daddy could do to keep her from loading up with him to go. #DaddysGirl #WacoHeroes’

Swanton told TODAY.com that Holt, who is a 22-year veteran of the force, has worked with fellow Waco officers to help rescue wheel-chair bound residents of an assisted living facility in the flooded Houston area.

He added that ‘it’s just emotional to get a note like that.’

‘It’s incredible to read that emotions in that letter that she wrote for him. But that’s what police families do,’ Swanton said.

‘So many times media reports on the sacrifices of officers, but we view it as part of our job. Our families are the ones that have to watch us walk out the door.’