Hallie Barnard, from Denton, Texas, was born with Diamond-Blackfan Anemia, which is when the bone marrow doesn’t make enough red blood cells, decreasing the amount of oxygen flowing through the body.

The only cure is a bone marrow transplant and, after about nine years of searching,  a match was found, Good Morning America found.

In the midst of this battle, she and her family set up Hallie’s Heroes in July 2015 to help fund research for bone marrow issues and host bone marrow drives to encourage more people to sign up for the registry.

But in March, just four months after her transplant, a lump formed on Hallie’s left leg, which doctors confirmed was a cancerous tumor.

In addition to chemotherapy, doctors told the Barnards that Hallie’s leg bone was weak and would likely break so, last month, her leg was amputated above the site of the tumor.

Despite her medical issues, Hallie is still helping out at the nonprofit, speaking to crowds of thousands to register for the bone marrow registry and raising money to help the families of kids battling cancer. 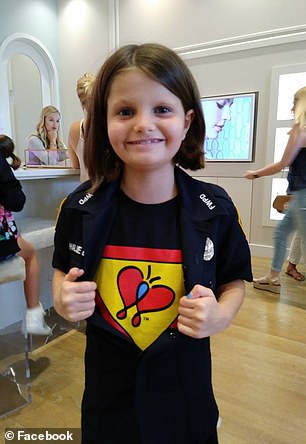 Hallie Barnard, 11 (left and right), from Denton, Texas, was born with Diamond-Blackfan Anemia and was diagnosed at 15 months old. DBA is a disease in which the bone marrow can’t make enough red blood cells 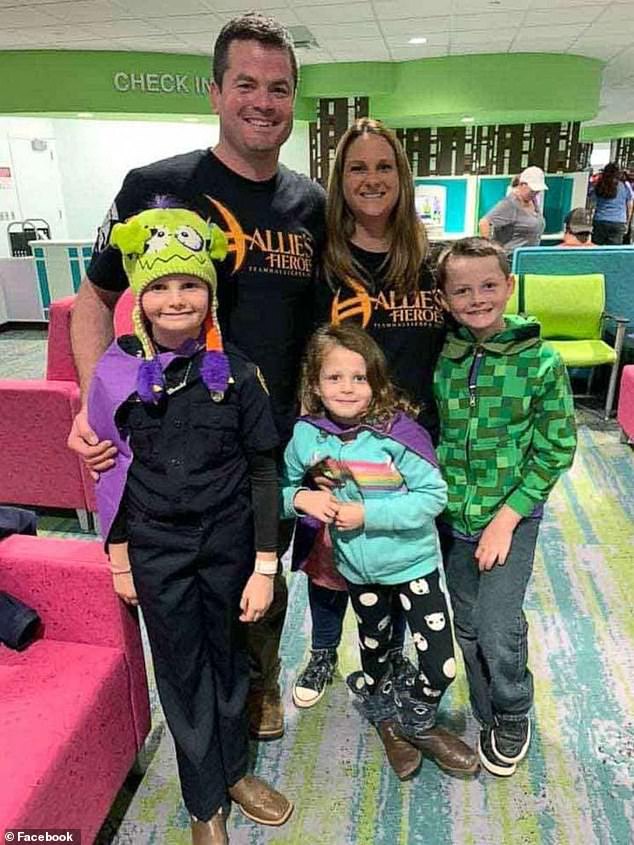 DBA is so rare that only 30 kids are diagnosed in the US and Canada each year, and the only cure is a bone marrow transplant. Pictured: Hallie (far left) with her parents and siblings

When Hallie was a newborn, her parents said they knew pretty quickly that something was wrong, according to a Facebook post.

She didn’t gain weight quickly, colds would linger for more than a month and she would not sleep often.

When she was one year old, she was tested for anemia at her check-up, which came back positive.

At 15 months, she was finally diagnosed with Diamond-Blackfan Anemia (DBA).

This is important because red blood cells carry oxygen throughout the body. A lack of oxygen was behind Hallie’s symptoms.

The disease is caused by mutations in one of several genes, which provide instructions for making proteins

It’s so rare that only 30 cases are diagnosed in the US and Canada each year, according to Stanford Children’s Health.

However, the only cure for DBA is a bone marrow transplant. 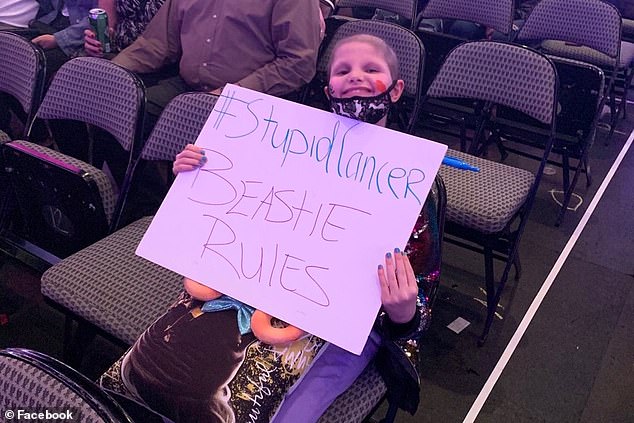 After years of searching for a donor, Hallie (pictured) received a bone marrow transplant in November 2018 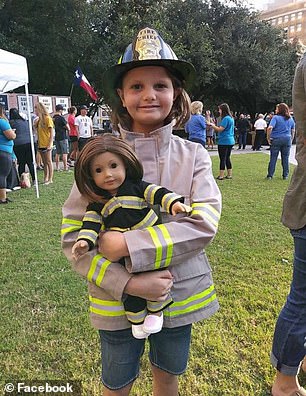 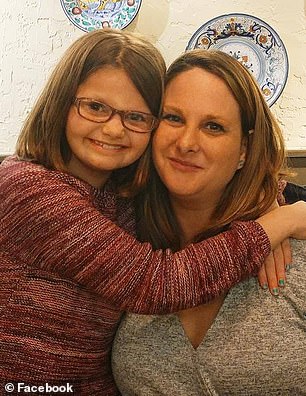 Hallie (left and right, with a friend) began having trouble walking in January 2019 and a tumor was found on her left leg in March. She was diagnosed with osteosarcoma, a type of bone cancer

Bone marrow is the spongy tissue inside bones where blood cells are made.

According to the Fred Hutchinson Cancer Research Center, 70 percent of patients in need of a marrow transplant do not have a matching donor in their family – including Hallie.

Her parents created the nonprofit Hallie’s Heroes to educate about DBA, raise money for research and hopefully find a bone marrow transplant.

After years of searching for a donor, the family finally found a match and had transplant surgery in November 2018.

Hallie began having trouble walking in January of this year. Then, in March, a lump was found on her left leg, reported Good Morning America.

Tests showed it was a tumor and Hallie was diagnosed with osteosarcoma, a type of bone cancer.

Osteosarcoma is the most common type of bone cancer. It occurs when the cells that grow new bone form a cancerous tumor. 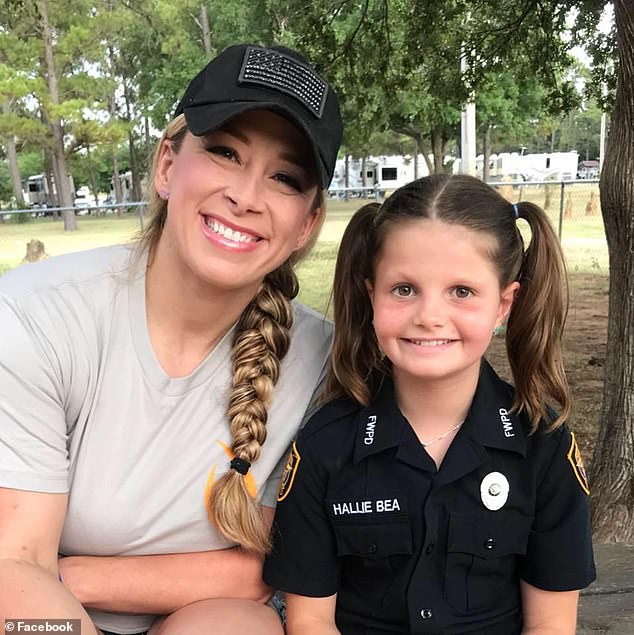 DBA patients have a higher risk of developing osteosarcoma, but there is no explanation for why. Pictured: Hallie, right, with Fort Worth Police Officer Brandi Kamper 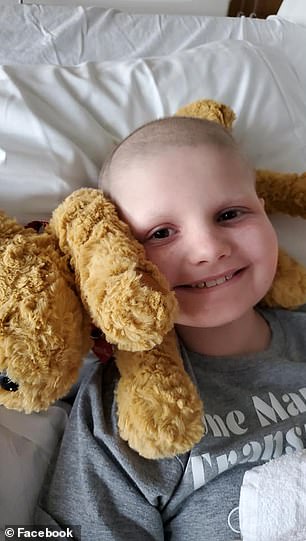 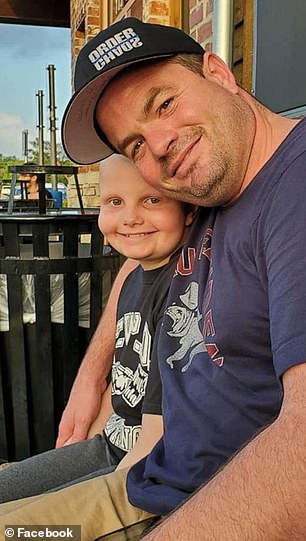 Doctors began Hallie (left and right, with her father) on chemotherapy and told her parents that she could risk breaking a bone if she performed any physical activities. Last month, the left leg was amputated in a 13-hour surgery at the site of the tumor.

According to the National Cancer Institute, DBA patients have a higher risk of developing cancer, particularly leukemia and osteosarcoma, but there is no explanation for why.

‘I felt like we kind of started all over again,’ Hallie’s mom, Elyse Barnard, said of the diagnosis.

‘It was worse than her initial diagnosis…Hallie’s been a champ through all of this. She said: “I feel like God gave me cancer because there’s other kids I’ve got to help”.’

Doctors began Hallie on chemotherapy and, last month, they told her parents that she could risk breaking a bone if she performed any physical activities.

So the left leg was amputated in a 13-hour surgery at the site of the tumor.

‘She told them: “Just cut it off”,’ Barnard told Good Morning America.

‘There’s a part of her that grieves, but she took it better than anybody – when they told her about the cancer, and about amputating.’

Since Hallie’s diagnosis, the mission of Hallie’s Heroes has expanded to helping families cover medical bills from childhood cancer.

A family friend of the Barnards has started a GoFundMe page to help cover the cost of Hallie’s treatments.