Texas man, 33, is arrested as he walked to a church carrying a loaded firearm claiming to ‘fulfill a prophecy’

Texas police have arrested an armed man dressed in tactical-style clothing who was on his way to a church where he claimed he would ‘fulfill a prophecy’.

Tony Dwayne Albert II, 33, has been arrested in Seguin, a suburb outside San Antonio, after a passerby saw the man carrying a handgun outside just before 7am on Sunday and called police.

An off-duty Seguin officer responded to the call and found Albert armed. 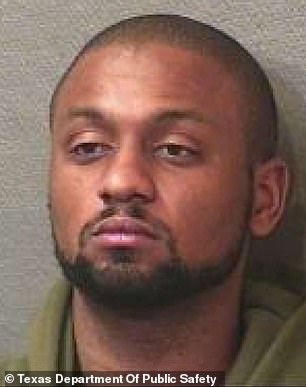 Tony Dwayne Albert II, 33, was arrested in Seguin, Texas on Sunday after a passerby reported seeing him walk towards a church with a loaded handgun and wearing tactical-style gear. Pictured above in old mugshots, left in 2017 and right in 2010 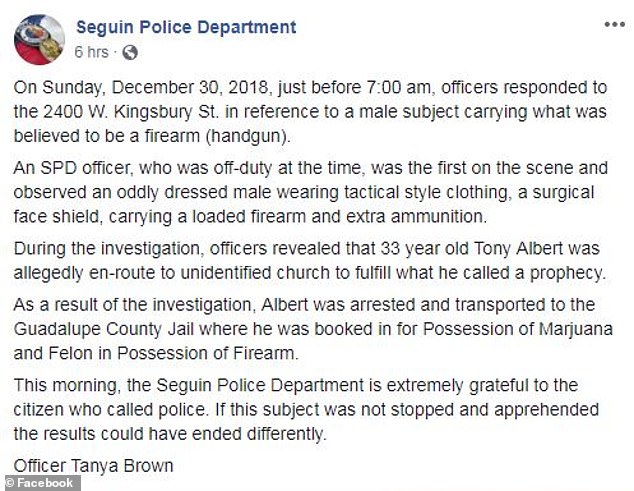 Seguin Police shared this post on Sunday thanking the citizen who called the cops on Albert saying: ‘If this subject was not stopped and apprehended the results could have ended differently’

He reportedly told cops he was on his way to the church to ‘fulfill…a prophecy’.

Albert was taken to Guadalupe County Jail. As of Sunday afternoon he remained in prison on $100,000 bond, according to the Huffington Post.

‘This morning, the Seguin Police Department is extremely grateful to the citizen who called police. If this subject was not stopped and apprehended the results could have ended differently,’ Officer Brown added.

Cops are not sure what he meant by fulfilling a prophecy. The church he was targeting has not been identified.

However he was arrested near where The Door Christian Church is located.

‘We don’t know what he meant. What ties he has to Seguin, I have no idea yet,’ Brown added.

Albert is from Houston, about a two and a half hour and 161-mile drive from Seguin.

Albert has a lengthy rap sheet.

He was arrested at least six times in Harris County on various charges that date back to when he was 24 in 2009, according to MySanAntonio.com.

He was convicted four times for driving while intoxication, possession of marijuana under two ounces, assaulting a family member causing bodily injuring and disarming a police officer.

He’s currently on two years probation after pleading no contest to disarming the cop. 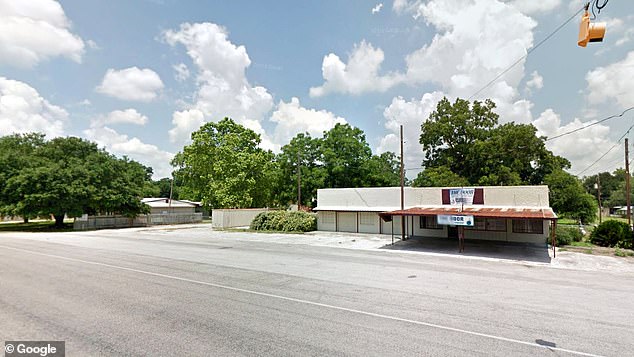 The Seguin Police Department arrested him around the 2400 W. Kingsbury St. in Seguin

According to past court filings he was associated with Messianic Judaism and the First Church of Cannabis.

The Texas Rangers, FBI and Bureau of Alcohol, Tobacco, Firearms and Explosives are all assisting the investigation of Albert.

Over the past couple of years there have been several devastating mass murders in places of worship at the hands of lone wolf gunmen.

In October the Pittsburgh synagogue Tree of Life was ambushed by suspect Robert Gregory Bowers and 11 people were killed and seven injured.

In November 2017 there was the Sutherland Springs church shooting in Texas where gunman 26-year-old Devin Patrick Kelley shot dead 25 people.