Sergeant E.J. ‘Jay’ Banks was a member of the Texas Rangers, who have patrolled the state for nearly 200 years after being formed in 1835.

In 1956, Banks was dispatched to keep black children out of the white Mansfield High School, near Dallas, according to author Doug J Swanson.

Backed by a court order, the National Association for the Advancement of Colored People (NAACP) had attempted to integrate the children into the school.

But instead of Governor Allan Shivers sending the Rangers to enforce the law, Sergeant Banks was sent to do the opposite.

Sergeant E.J. ‘Jay’ Banks was a member of the Texas Rangers, who have patrolled the state for nearly 200 years after being formed in 1835

Near to the school’s entrance, a white mob had assembled, with some carrying signs threatening anyone who tried to integrate the school.

An infamous photo shows Banks leaning against a tree while, behind him, a black effigy is seen hanging by a rope from the school’s entrance.

Despite the shocking scene, Sergeant Banks later wrote that the white citizens who had hanged the black figure were ‘just “salt of the earth” citizens’.

They were ‘concerned,’ he added, because ‘someone was trying to interfere with their way of life’.

As a result of the presence of the mob outside the school, and the Rangers’ role in allowing it to remain, no black children enrolled at the school, according to Swanson.

A few days later, Sergeant Banks and other rangers were sent by Governor Shivers to stop African Americans from enrolling at the all-white Texarkana Junior College.

Swanson explains that a mob of white man blocked the path of an 18-year-old woman and 17-year-old boy, who were both black. 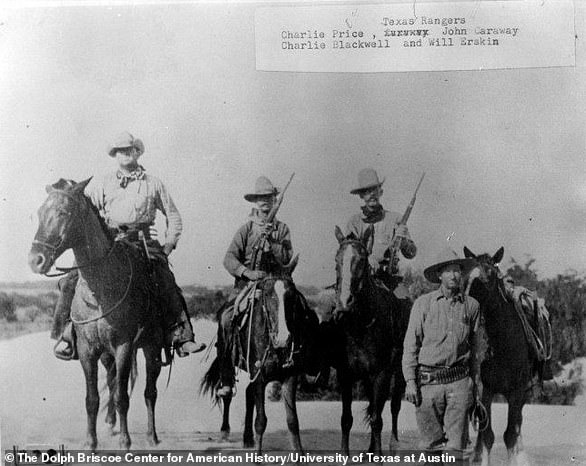 Some allegedly kicked the boy and threw gravel but the Rangers only threatened to arrest the students.

Swanson adds that while Banks was just following the governor’s orders, he became ‘for a while the face of uniformed, armed and officially sanctioned white resistance to court-ordered civil rights.’

The statue depicting Banks at Love Field airport was commissioned in 1959. Sculptor Waldine Tauch picked a real Ranger to model for it and it turned out to be the Sergeant.

The title ‘One Riot, One Ranger’ is in reference to the ‘unofficial slogan’ of the Rangers.

It was allegedly born when only one ranger turned up to quell a disturbance, prompting a local to ask why he was alone.

The Ranger then responded, ‘You only have one riot, don’t you?’.

Swanson adds that most historians agree that no ranger ever said those words, but the expression has remained as one which demonstrates the Rangers’ ethos.

Today, the Rangers continue to be a major part of law enforcement in Texas.

But the Rangers have also been responsible for what author Doug J. Swanson describes as ‘terrifying atrocities’.

One of their main roles was to patrol the border with Mexico.

And from 1910 to 1920, Rangers and civilian vigilantes murdered thousands of Mexicans and Tejanos, meaning Mexican-descendant Americans, in South Texas in an onslaught known as La Matanza.

Some of the victims were bandits or Mexican revolutionaries – but most where ordinary people that got caught in the violent crossfire. 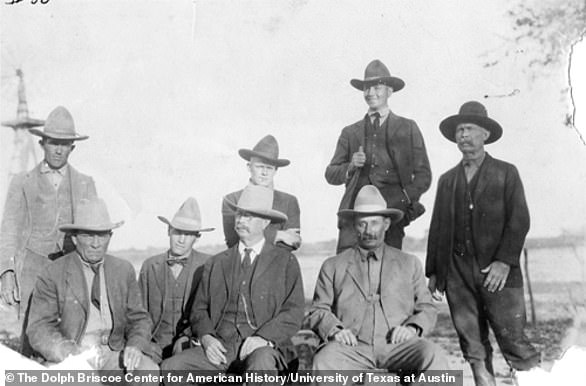 The Texas Rangers became so notorious for their brutality against Mexicans and Mexican Americans they were dubbed ‘los diablos tejanos’ which means ‘the Texan devils.’ Rangers pictured above in their trademark hats

The most egregious of cases involved the lynching of law-abiding Mexican Americans in 1915, including that of Antonio Rodriguez, Jesus Bazan and Hidalgo Commissioner Antonio Longoria, that sparked fury that boiled through Mexico.

Some 300 murders took place in the Rio Grande Valley during 1915 alone, historian Trinidad Gonzalez told CNN, including Bazán and Longoria.

La Matanza broke out in the midst of rising tensions between Texas and Mexico following the Mexican Revolution in 1910.

After the revolution, Mexican refugees migrated to the U.S., looking to escape the violence and political upheaval in their own country.

During the 1910’s the Mexican population in Texas tripled.

But the influx of refugees led to violent scuffles on the border and led to the Bandit War, a series of raids in Texas from 1915 to 1919 carried out by Mexican rebels from the states of Tamaulipas, Coahuila, and Chihuahua that led to Anglo-Texan counter-raids.

Much of that fighting involved the Texas Ranger Division and the group is largely responsible for the deaths of 5,000 Mexican Americans during La Matanza.

The Texas Rangers became so notorious for their brutality against Mexicans and Mexican Americans they were dubbed ‘los diablos tejanos’ which means ‘the Texan devils.’