Texas sees increase in COVID-19 cases after lifting its lockdown as number of infected tops 45,000

The number of confirmed cases of COVID-19 in Texas has been steadily growing in recent days as the state has started to reopen nonessential businesses.

The Texas Department of State Health Services reported that as of Saturday, there were a total of 45,198 positive tests for coronavirus.

So far, 1,272 Texans have died. Fifty-six more people died on Friday than on the previous day.

On Thursday, 58 deaths were recorded – the deadliest day on record in the state.

Around 646,000 people have been tested – mostly by privately run labs.

The first COVID-19 case in Texas was reported in Fort Bend County on March 4.

That patient had traveled abroad and recently returned home.

A month later, there were 6,110 cases in 151 counties across the state, according to The Texas Tribune. 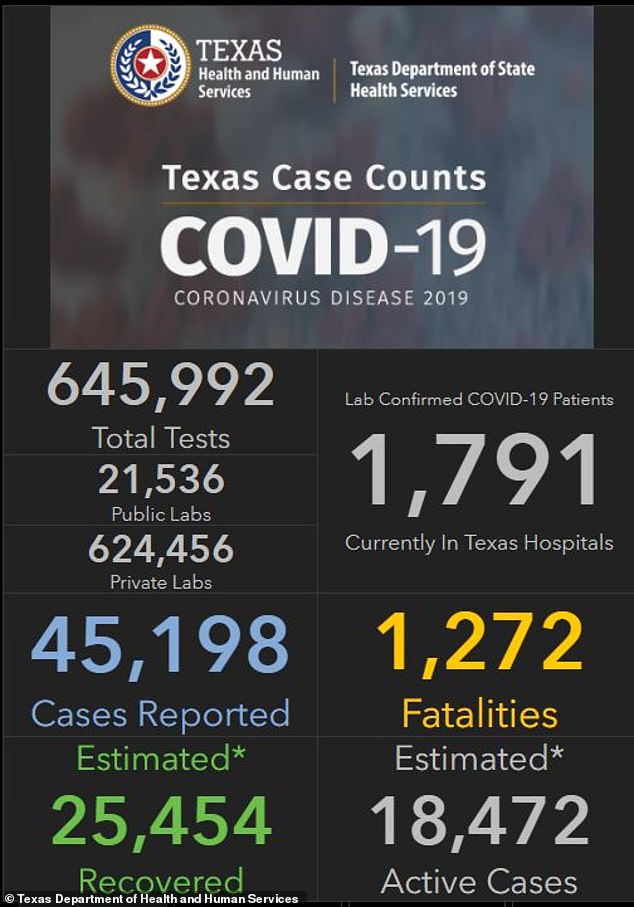 As of Saturday, there were 45,198 total cases of COVID-19 across the state. The number of fatalities was nearing 1,800 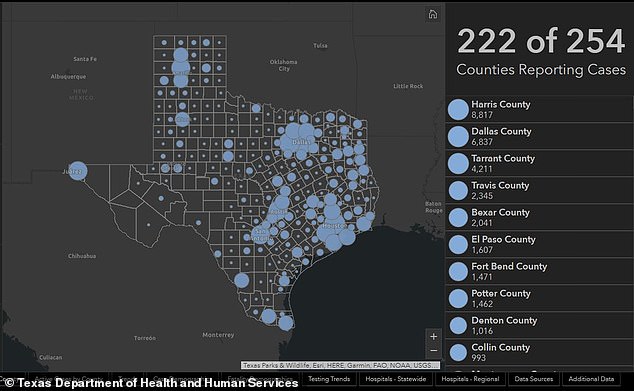 Despite the increasing numbers of coronavirus cases, Governor Greg Abbott, a Republican, said that he favored reopening the economy due to the daily infection rate – the ratio between positive cases and tests reported – and the hospitalization rate.

As of Friday, the daily infection rate was 5.93 per cent. Abbott said he was advised by public health experts who recommended reopening so long as the rate remained below the 6 per cent threshold.

As of Friday, the hospitalization rate was down to 9.29 per cent. In early April, it was hovering around 20 per cent. 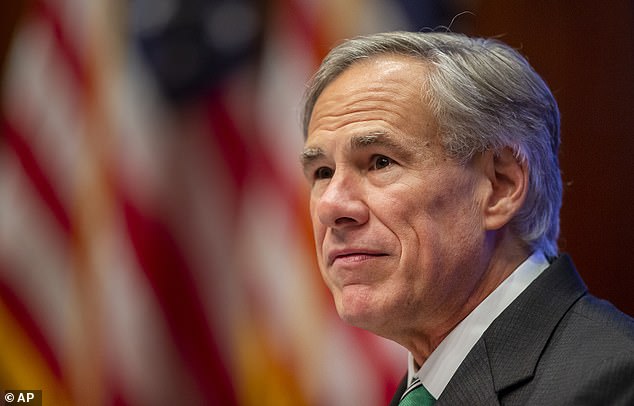 Governor Greg Abbott, a Republican, said that the state should reopen as long as daily infection rate and hospitalization rates remained relatively low. Abbott is seen above in Austin on May 5

There are currently 1,716 people in Texas hospitals being treated for COVID-19.

A spokesperson for Abbott told ABC News that the number of cases are increasing because there is more testing.

‘The governor has been clear that as the state of Texas conducts more tests, we will see the raw number of cases rise,’ Wittman said.

‘However, the [rolling seven-day] average positivity rate has steadily declined from our high April 13 [of a bit more than 13 per cent] to around 5 per cent today.

‘Our hospitalizations remain steady, and Texas has one of the lowest death rates per capita in the nation.’

The biggest jump in the number of cases reported Thursday came in Dallas County, where 243 new cases were reported, bringing its total to 6,602.

That was still second to Harris County, where 205 new cases reported Thursday brought its total to 8,621.

The biggest increase in COVID-19-related deaths was reported in El Paso County, which reported eight new deaths on Thursday. 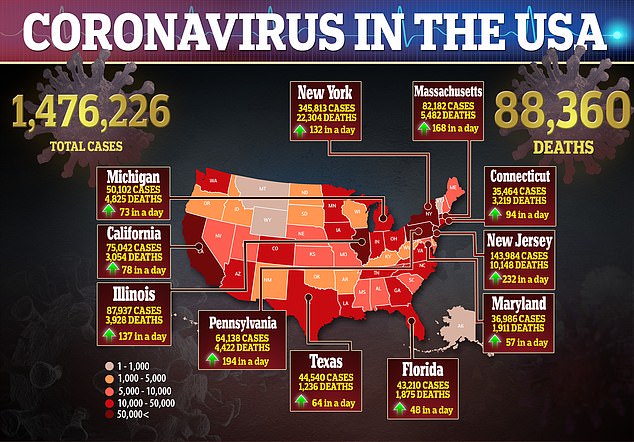 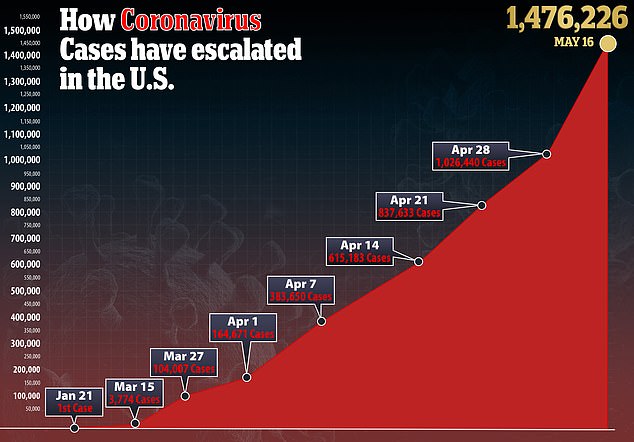 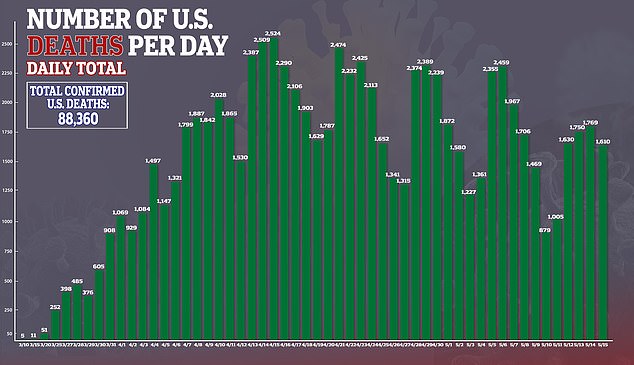 For most people, the new coronavirus causes mild or moderate symptoms, such as fever and cough that clear up in two to three weeks.

For some, especially older adults and people with existing health problems, it can cause more severe illness, including pneumonia and death.

The 747 workers at the STX Beef plant were tested for COVID-19 from Saturday through Wednesday, Nueces County Health Director Annette Rodriguez said.

No evidence was found of food or food packaging being associated with coronavirus transmission, she said, and there have been no reports of meat contamination.

In a statement, STX Beef has said it is implementing extra safety precautions, including face masks, face shields, social distancing measures in break rooms and other safety measures. 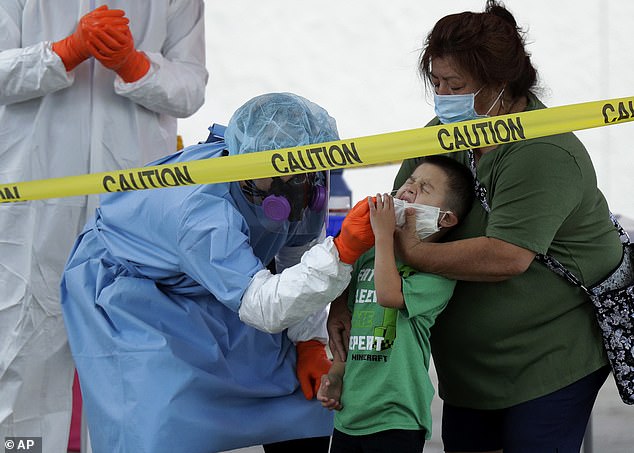 Jerry Mann (center) is held by his grandmother, Sylvia Rubio, as he is tested for COVID-19 by the San Antonio Fire Department at a free walk-up test site set up to help underserved and minority communities in San Antonio on Thursday

On Wednesday, a JBS USA meatpacking plant in the Texas Panhandle accepted the state’s offer to test employees for the coronavirus as officials try to contain a cluster of infections connected to the facility.

Hundreds of cases of COVID-19 have been linked to the Moore County plant near Amarillo, and Abbott has singled out the county as an area of concern.

Outbreaks have hit meat plants across the country. President Donald Trump has ordered them to remain open, but Democratic presidential candidate Joe Biden called the plants among ‘the most dangerous places there are right now.’

More than 3,000 nursing home residents in Texas have tested positive for the coronavirus, according to data released by the state on Friday.

The 3,000 positive tests represent about 4 per cent of the estimated number of Texans living in nursing homes, the Houston Chronicle reported.

By comparison, about 0.15 per cent of Texas residents have tested positive for the virus that causes COVID-19.

Abbott on Monday ordered coronavirus testing for all Texas nursing home residents and staff after the White House urged governors to do so as deaths mount nationwide.

More than 26,000 residents and staff have died from outbreaks of the virus at the nation’s nursing homes and long-term care facilities, according to an AP tally based on state health departments and media reports.

That is about a third of all 76,000 deaths in the US that have been attributed to the virus. 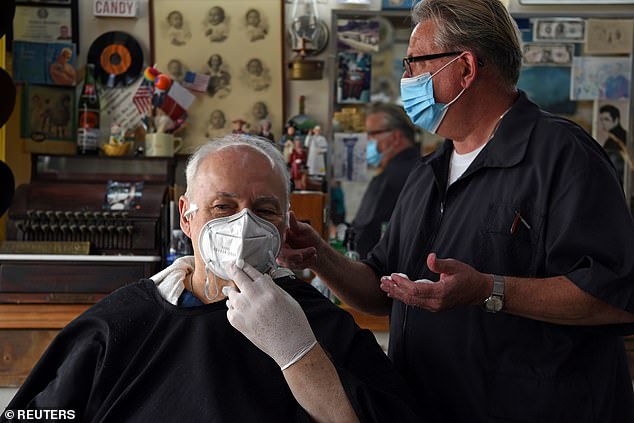 A man at Doug’s Barber Shop in Houston receives a haircut as social distancing guidelines to curb the spread of coronavirus are relaxed. The image above was taken on May 8

The numbers for nursing homes that the state has released are broken down by region, but advocates and family members have been calling for more detailed information that shows cases by specific facility or at least by county.

‘We’d like to see more transparency where the cases are,’ said Amanda Fredriksen, associate state director for advocacy and outreach at AARP Texas.

‘And in seeing more testing going forward, especially as the state continues to open up.’