Texas student, 22, who was bitten 800 TIMES by dog reveals her face for the first time since attack

A Texas student has revealed her face for the first time since being mauled and bitten 800 times by a dog – still says she worker with animals again even after the attack.

Jacqueline Durand, a 22-year-old student at the University of Texas at Dallas, went to the home of Dr. Justin and Ashley Bishop on December 23 having she was hired to dog-sit while they were away.

She was assured that when she went to the home, the two rescues dogs – A German Shepard mix Lucy and a Pitbull mix Bender, which she described as ‘lovely’ prior to the attack – would already be in their crates and kennels, but on the day Durand visited, the animals were allegedly left to roam around the house freely.

Durand was unable to even call 911 herself, an alarm was tripped, notifying police by the dogs’ rapid movement. Authorities were unable to enter the home for 37 minutes, as they didn’t feel safe. When ask why it took more than 30 minutes to get inside the house, a representative told CBS News they were ‘only able to see Jacqueline Durand’s legs and were not immediately aware of the extent of her injuries.’

The dogs ripped off Durand’s ears, nose, and face, leaving nothing by bone behind, and she lost 30 per cent of the blood in her body, leaving her hospitalized for 60 days. She also had to go through months of therapy, including learning to stretch her mouth 1mm at a time.

Despite the horrific attacks and the multiple reconstructive surgeries she underwent, Durand said she was ready for the world to see her face.

‘It’s time to show who I am now, and I can’t be scared of it,’ she said on CBS Mornings. 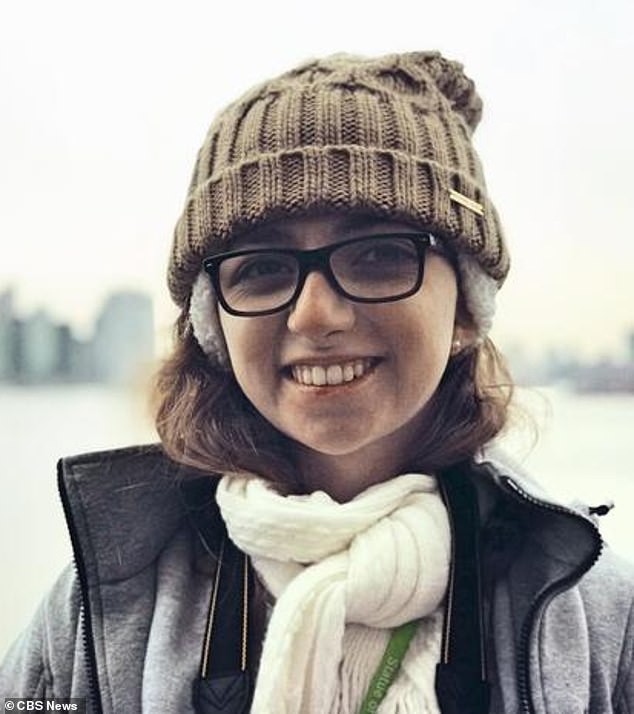 Texas student Jacqueline Durand, 22, (pictured before the attack) was violently mauled by a German Shephard mix named Lucy and a Pitbull mix named Bender a day before her 22nd birthday and only a few days before Christmas 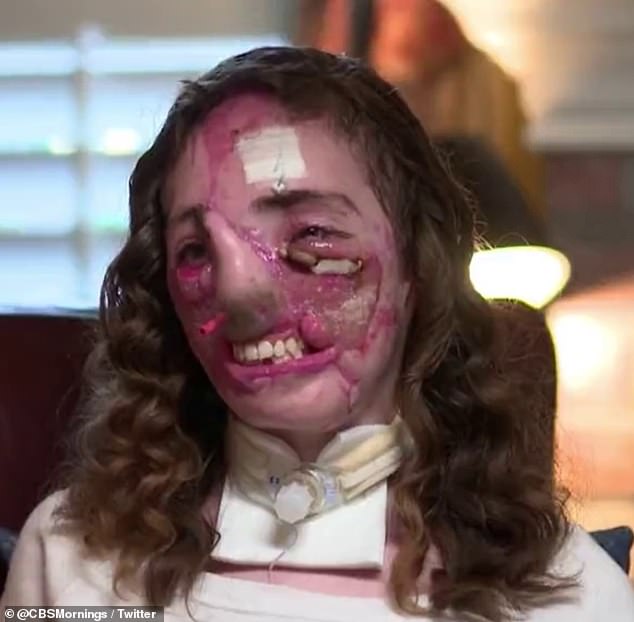 After spending 60 days in the hospital – where she underwent multiple reconstructive surgeries using skin from her buttocks on her face – and extensive therapy, Durand is now home and is ready to ‘show who I am now’ 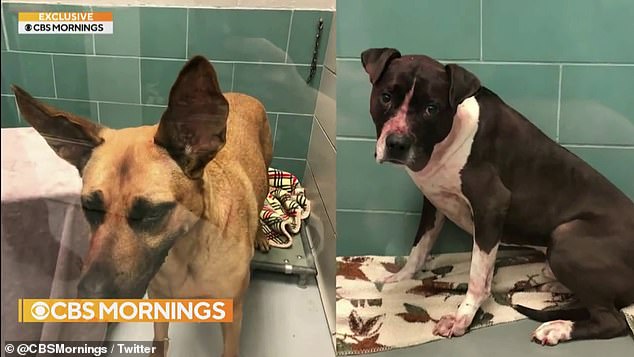 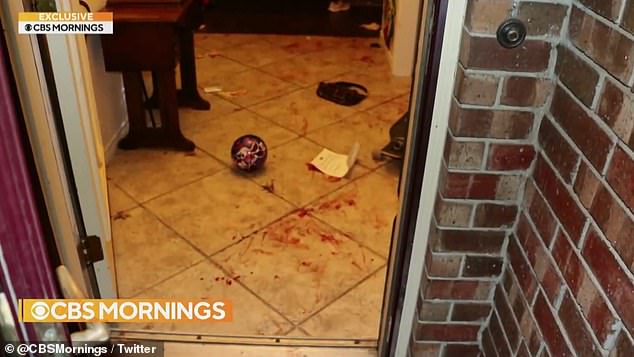 The floor was left covered in blood after the attack, as seen on bodycam footage from police, who were unable to enter the home for 37 minutes because they felt unsafe

One day before her 22nd birthday, Jacqueline Durand was attacked by two dogs she was dog-sitting. Her face was changed forever — but she survived.

She says it is still her dream to work with animals, and she isn’t afraid of showing off her scars. pic.twitter.com/0Qp75lnC6T

Durand’s lawyers say that as soon as she opened the door to their home, the dogs pounced and she was viciously mauled by the two. The owners, who have three kids – including a three-year-old – claimed the dogs were never vicious, telling investigators that they had ‘zero’ problems with them. However, they reportedly had a sign on their home claiming to have ‘crazy dogs’ and to not ‘ring the doorbell.’

‘The warning on the door suggests that the Bishops knew that both of these dogs have acted aggressively to people arriving at the front door,’ Durand’s lawyer Chip Brooker told CBS Mornings.

Durand is accusing Dr. Bishop and his wife of negligence for allegedly failing to control, secure and train the animals, as well as ‘failing to provide a safe environment for their invitees,’ according to the suit.

He also said they planned to prove the couple’s negligence through the results they received after examining the dogs after they were removed from the property. Brooker said the expert team’s results show ‘that the dogs were dangerous and had vicious propensities.’

‘We suspect the Bishops knew that. We suspect everybody who came across these dogs, particularly Lucy, knew that,’ he told CBS News. 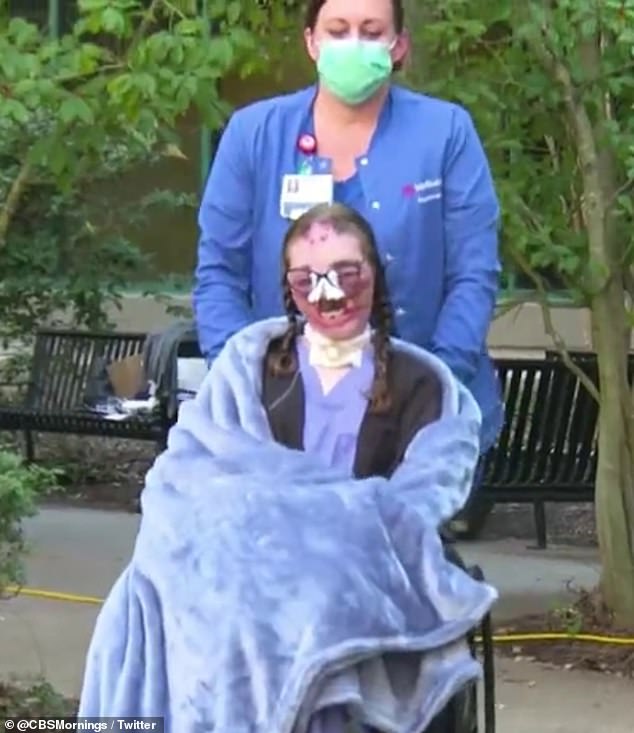 Durand (seen being pushed by a nurse at the hospital) had met the dog prior to the attack, but was told they would be in their kennels before she arrived. The owner later told her that she failed to put them in the kennel 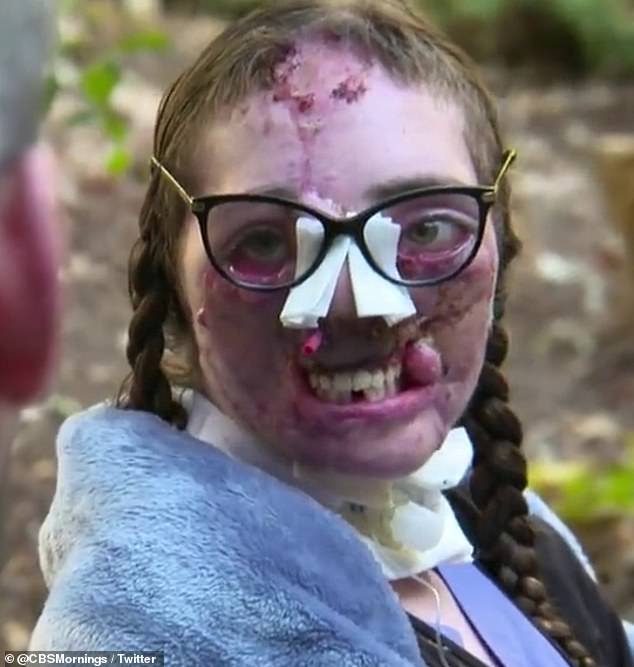 The dogs ripped off her nose, lips, and ears after rushing at her when she opened the front door

After she went inside, the dogs then proceeded to maul her ‘catastrophically,’ tearing off and eating both of her ears, her nose, her lips, and most of her face below her eyes, the lawsuit states.

The attack happened one day before her 22nd birthday and just few days after she had already been to meet both dogs at their home with their owner, specifically to get to know them and their routines.

The suit argues that the situation Durand was entering was made even more dangerous by virtue of the fact the dogs were not in their kennels, as had been promised.

Police bodycam footage shows the bloody dog beds and Durand’s blood pooled on the floor. She was laying on her stomach naked when police were finally able to enter the home and rescue her. She can be heard crying as medics inspected her body and told her to ‘keep breathing.’

The Coppell Police Department later posted a picture with Durand on February 21 on its Facebook page, welcoming her home after her two-month hospital stay.

‘Jacqueline, you have been in our thoughts and prayers and we are so grateful that you are back home. You’re such a beautiful warrior and an inspiration to us all,’ the department wrote.

Durand is seeking a jury trial and compensation of more than $1million.

Jacqueline Durand, (pictured) a 22 year-old student University of Texas at Dallas, went to the home of Dr. Justin Bishop and his wife Ashley after being hired to dog sit 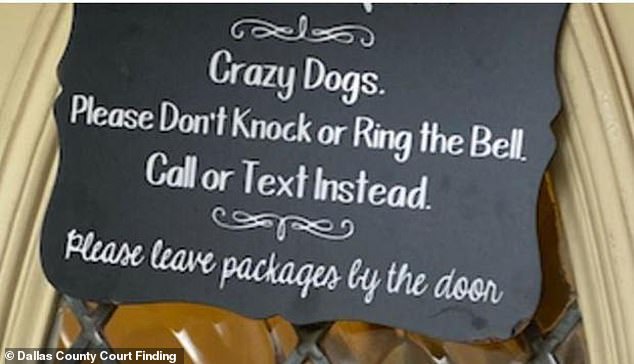 A sign on the door warns: ‘Crazy Dogs. Please don’t knock or ring the bell. call or text instead.’ 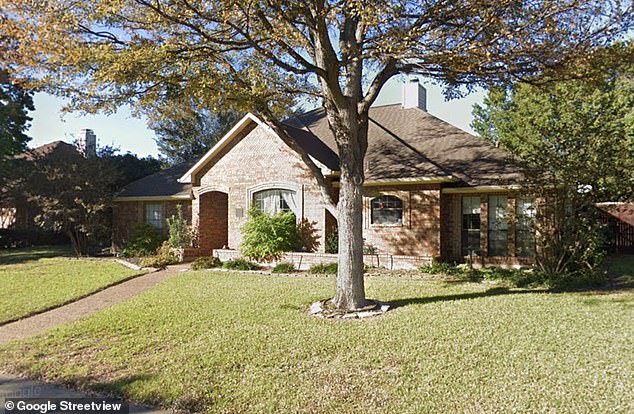 The attack is said to have happened at the Bishop family home, pictured, in the northwest suburbs of Dallas, Texas

‘The owner assured Jacqueline that the dogs would be crated,’ Durand’s attorney Chip Brooker said in a statement.

‘But, shortly before her first visit, the owner texted Jacqueline to tell her that she failed to crate the dogs before leaving town.

After the dogs pushed the door open, Durand claims they knocked her off balance, causing her to fall and drop her cell phone.

The dogs were allegedly so violent and bloodthirsty that they pulled all of Jacqueline’s clothes off, including her blue jeans.

The attack only ended after a neighbor heard the commotion coming from next door.

The emergency services were immediately called and Durand was taken straight to a Level 1 trauma center, equipped to handle the most serious of conditions. She had to be revived on the trauma room table.

During the brutal incident, the dogs attacked her entire body leaving her with 800 puncture wounds. 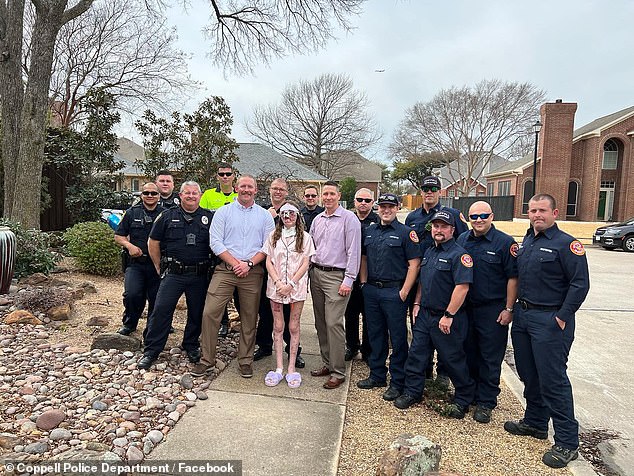 The officers that responded to the call posted a pictured with Durand on February 21, welcoming her home and wished her luck on her long recovery. ‘Jacqueline, you have been in our thoughts and prayers and we are so grateful that you are back home. You’re such a beautiful warrior and an inspiration to us all,’ the police department wrote

‘I am so blessed to be surrounded by so much love and support as I go through this hard time in my life. Thank you everyone who is supporting and loving me every step of the way since the beginning! I am making good progress every single day that I’m here. Prayers are being answered! Thank you,’ she wrote

The dogs were captured and placed in the care of the City of Coppell before a municipal judge decided that both dogs should be euthanized, the suit said. 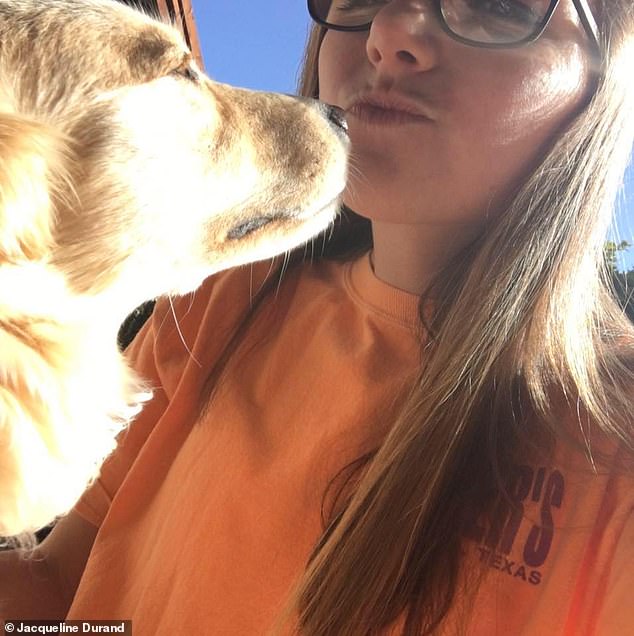 Durand (pictured) was left with hundreds of puncture wounds and remains hospitalized after undergoing multiple reconstructive surgeries, with more to go 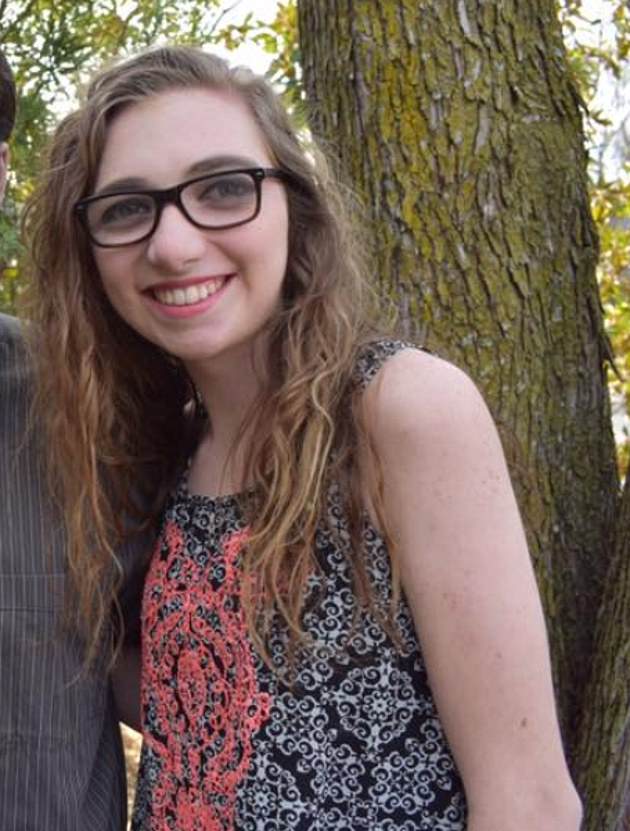 The lawsuit lays the blame directly at the Bishops who allowed the animals to remain on their property while ‘knowing they had dangerous propensities.’

It alleges the Bishops knew of the dog’s tendencies towards violence because of the ‘crazy dogs’ warning sign that was visible to anyone walking up to the front door.

‘Jacqueline will forever measure her life in terms of before and after opening that door,’ Brooker said. ‘She will be permanently disfigured for the rest of her life, and we filed this lawsuit to make sure all the responsible parties are held accountable.’

Pit bulls continue to top the list of America’s most dangerous dog breeds, having been responsible for 284 fatal attacks on humans from 2005 to 2017.

The second breed on the list, Rottweilers, came a distant second with 45.