A Texas high school teacher and married father-of-two got the greatest shock of his life in April 2017 when he collapsed in his bedroom from a near-fatal heart attack, just months after competing in a triathlon.

Drew Calver’s second-greatest shock came a month after his heart surgery when he received a bill in the mail from St David’s Medical Center, informing him that he was responsible for paying an outstanding balance of $108,951, because his medical insurance cover only $55,840 of the total amount.

Calver, 44, is a history teacher and swim coach at Austin High School, and he says his annual income is about half of the $109,000 balance.

Drew Calver, pictured here with wife Erin and their two girls, was settled with a $109,000 hospital bill after suffering a heart attack in April 2017 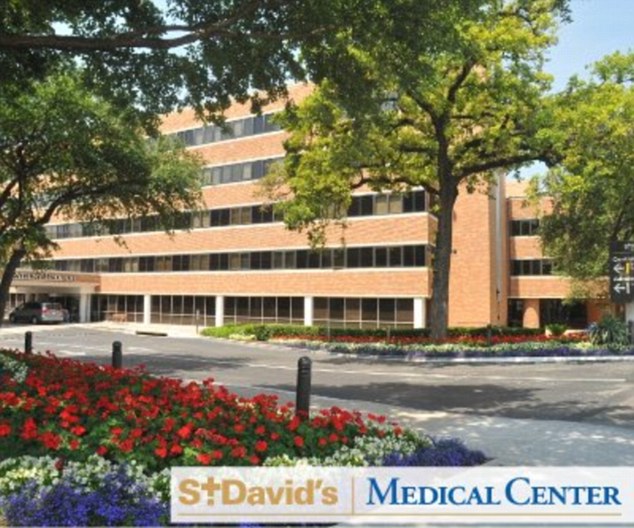 Calver, 44, underwent surgery in St David’s Medical Center, where he said staff reassured him that his health insurance would pay for his medical expenses

‘They’re going to give me another heart attack stressing over this bill,’ Calver told Kaiser Health News, which first reported on the patient’s plight together with NPR.

For Calver and his family, it all started on the morning of April 2, 2017, just after his wife, Erin, headed out to the store with their six-year-old daughter, leaving him with their eldest, who was seven at the time.

Calver was in his bedroom when he was overwhelmed by excruciating chest pains and crumpled to the floor.

He called his young daughter for help, and a neighbor rushed him to St David’s, which was the closest hospital to his house.

At the cardiac ICU, medical tests showed that the fit and seemingly healthy swim coach had a blockage in his left anterior descending artery, commonly known as the ‘widow-maker,’ which required emergency surgery.

Even as he was being prepared for a procedure to insert four stents into the clogged blood vessel, Calver asked hospital staff whether his health insurance policy would cover the treatment, since St David’s was out of his network. 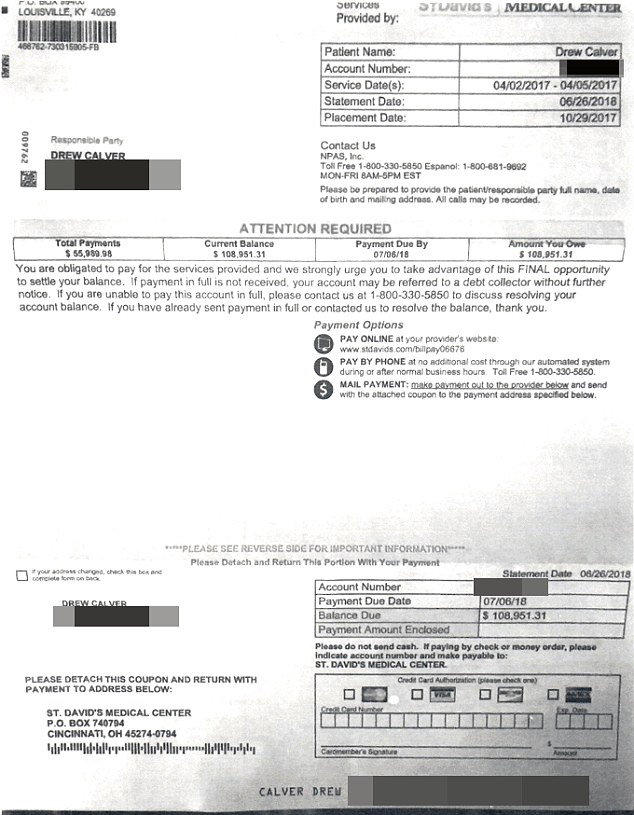 As it turns out, the hospital was out of network and Calver’s insurance only paid $55,000, leaving the high school history teacher with the $108,951 balance 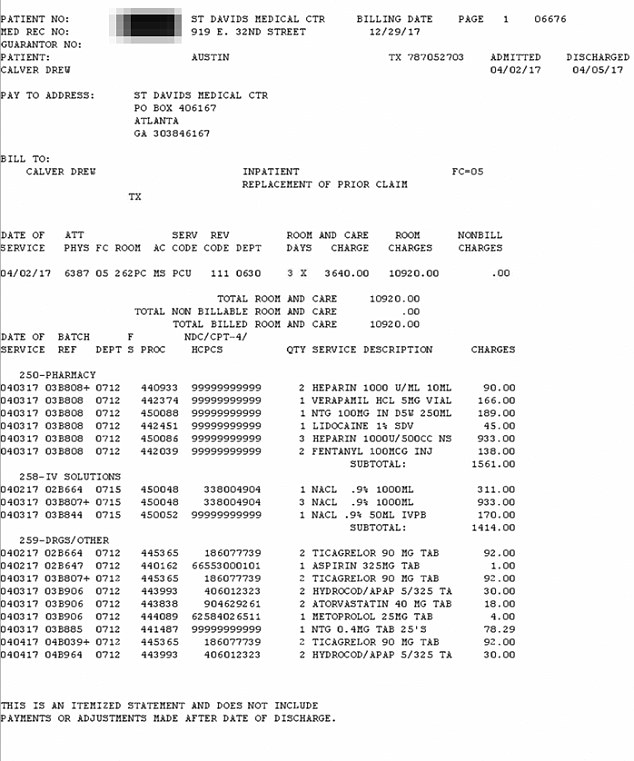 This bill shows an itemized list of charges, including more than $10,000 for his hospital room 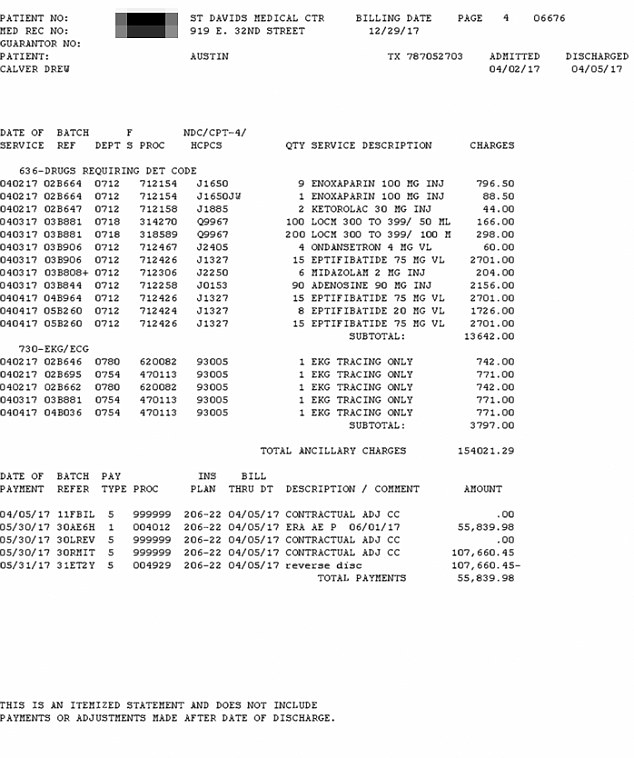 Calver was charged just under $3,800 for five EKG tests, according to the bill 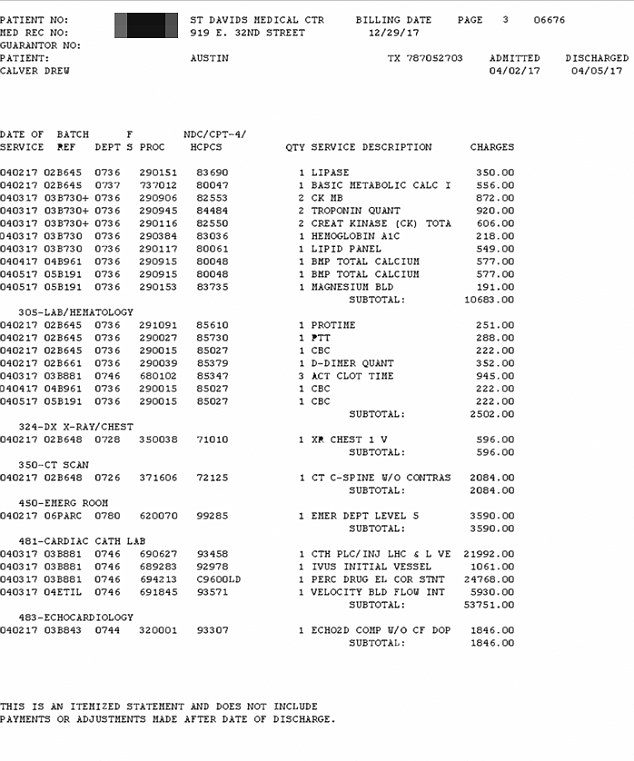 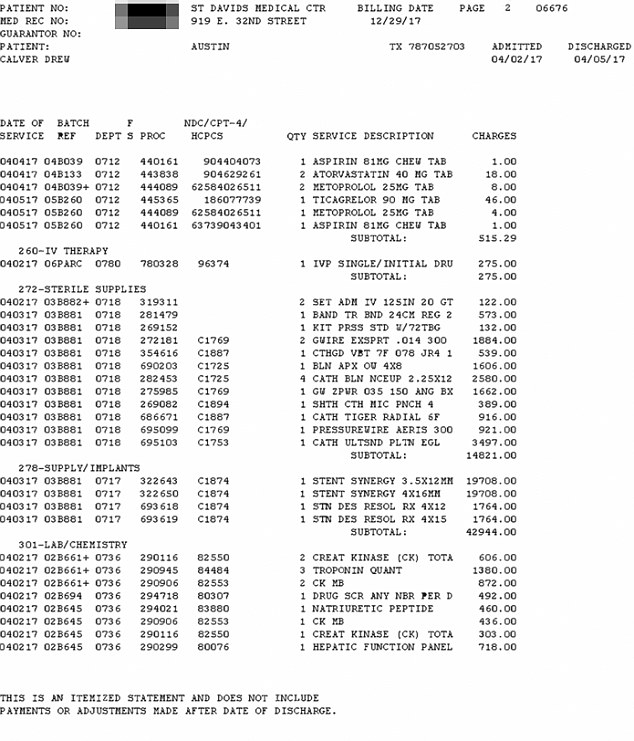 The hospital charged the patient more than $42,000 for four stents, two of which were billed at $19,000 apiece

‘I’m on Seton, my Austin ISD [insurance] is Seton network, I just want to make sure I’m being covered by this,’ he recalled telling staffers. ‘And they said, “Yeah, we’ve accepted your insurance, your insurance has been contacted,” it sounded like they’d said yes,’ Calver said.

The operation was a success and Calver was released home four days later.

Then a month later, the six-figure hospital bill arrived in the mail. The amount included more than $42,000 for the stents, two of which were billed at $19,000 apiece.

At first, Calver said he thought that a mistake had been made either by the hospital or by his insurance company.

Soon after, the family began getting phone calls from debt collectors demanding payment.

Time after time, Erin and Drew would explain to the collectors that they could not pay the amount in full, but they said they were never offered any financial assistance.

Eric and Drew said they faced a bureaucratic nightmare trying to navigate the system, and claimed that the hospital only extended an offer to work out a solution with them in August 2018, more than a year after the teacher’s hospitalization.

On Tuesday, St David’s HealthCare, which runs the medical center in Austin, defended its billing practices, explaining that when a patient arrives for treatment, their top priority is to make sure he is stable and only then check his insurance coverage. 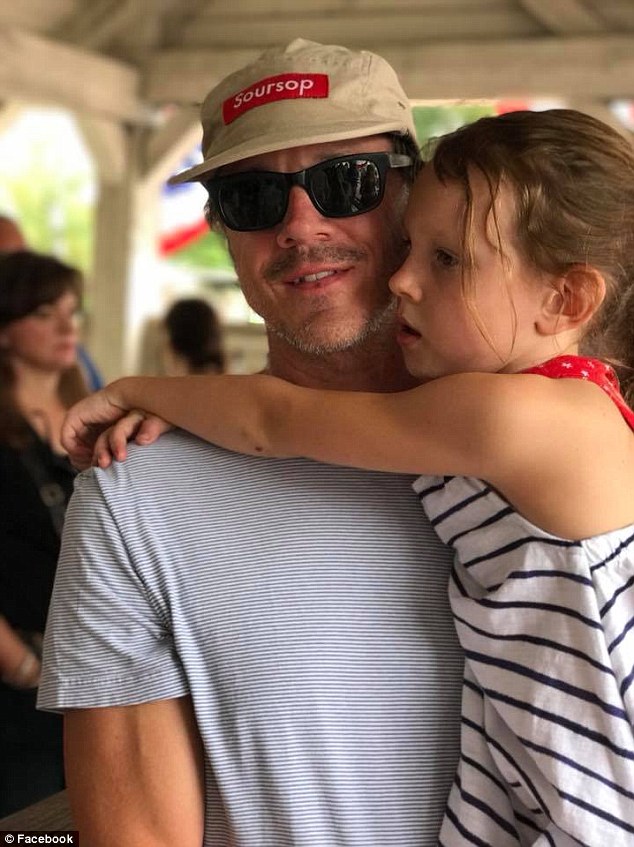 Relief: After more than a year of back-and-forth with the hospital, St David’s offered Calver to apply for a financial assistance program, that could reduce his bill down to $800

If it turns out that the hospital is out of network, they would try to get the patient transferred to an in-network facility, but it is not always possible, especially in emergency situations.

The hospital also told KXAN it has a financial assistance program that takes into account a patient’s income. If Drew Calver applies for the program, his bill would be reduced to just under $800, which is less than 1 per cent of the current balance.

Calver said he would gladly pay the discounted bill, but he expressed frustration that it took the hospital so long to relay that information to him, instead of sparing him and his family the aggravation.

‘I need to focus on staying healthy and preventing another heart attack and reducing stress in my life, and this is doing the exact opposite,’ he said of the months-long process.

A spokesperson for St. David’s challenged the Calvers’ claim that no one had told them about the financial assistance program until this month, stating that they sent the family the relevant paperwork in April 2018, after exchanging many phone calls with them to discuss their bill.

The hospital insisted that its staff did ‘everything right’ in handling Calver’s case and blamed the patient’s employer and insurance company for offering such a narrow network.

Aetna said through a spokesperson that effort were being made to ‘rectify the situation.’