A Texas TV station employee has been fired after a crude audio recording was played in the middle of a live newscast.

Viewers of KRIS were in for a shocking surprise on Monday when a report on a new harbor bridge was interrupted by the vulgar clip.

The screen suddenly went to black and a man could be heard uttering the words ‘F**k it, lick it, smell it’ on the 9pm news report.

Viewers of local Texas station KRIS were in for a surprise on Monday when a live newscast was interrupted by a vulgar clip where someone is heard saying ‘F**k it, lick it, smell it’

KRIS, a local station in Corpus Christi, has since revealed that the voice belonged to a reporter at the station.

‘We do apologize for that, we just had some incident there,’ evening anchor Stephania Jimenez told viewers after the audio aired.

Alexander said the station ‘immediately began an investigation’ into the audio and how it was able to play on-air.

‘We do apologize for that, we just had some incident there,’ evening anchor Stephania Jimenez told viewers after the audio aired

‘We learned that a series of technical and human errors lead to the mistake,’ he said.

‘We have taken swift and appropriate action with the employees who were involved in the broadcast in accordance with our company policies.’

Alexander said one employee was fired and another was suspended. There were also unspecified ‘reprimands’.

‘We have also modified our editing workflow and procedures to ensure that mistakes like this cannot happen again,’ he added.

The names of the employees who were punished have not been released.

One viewer who caught the newscast posted it on Facebook, where it has since been viewed more than 32,000 times. 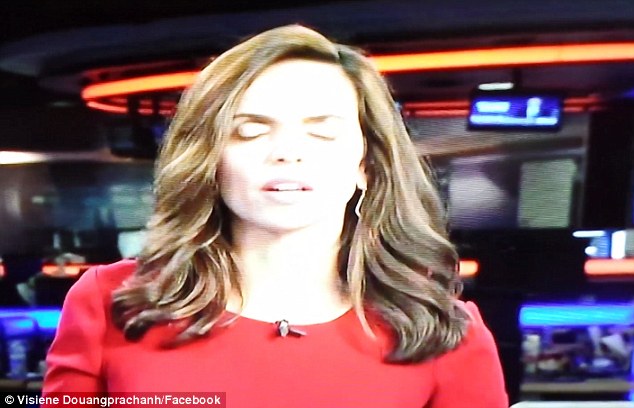