A Texas university has announced it will no longer breed sick dogs in an attempt to find a cure for a muscle-wasting disease.

This follows years of protests and lawsuits by animal right advocates, including People for the Ethical Treatment of Animals (PETA), which released footage of the dogs on ‘slatted floors, denied even a blanket’ in 2016.

The organisation claims DMD causes the canines’ tongues to swell, leaving them at risk of choking to death.

Animal activist and Beatles star Paul McCartney even wrote a letter to the university’s president, calling for the ‘heartbreaking’ experiments to stop.

A spokesperson from TAMU insists the decision is down to a lead researcher retiring, adding the university will still work with dogs bred by another facility.

PETA said it ‘will not rest’ until TAMU ‘closes down the laboratory’ and puts the dogs up for adoption.

PETA released footage in 2016 (grab, pictured) of the dogs being housed in cages with ‘slatted floors, denied even a blanket’. Texas A&M University claimed it was released ‘without context’ 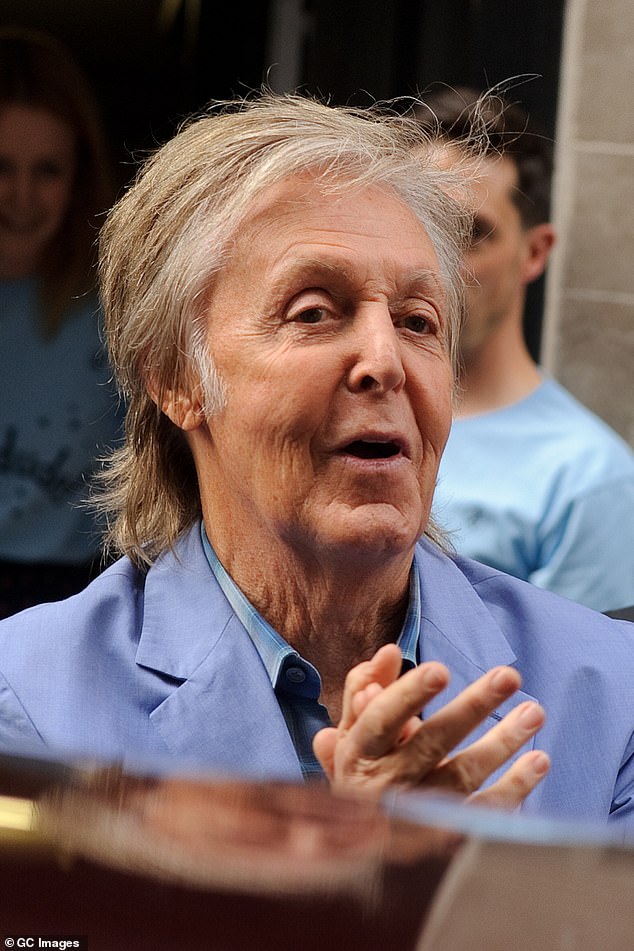 Animal activist and Beatles star Paul McCartney wrote a letter to the university’s president, calling for the ‘heartbreaking’ experiments to stop. He is pictured in London on September 6 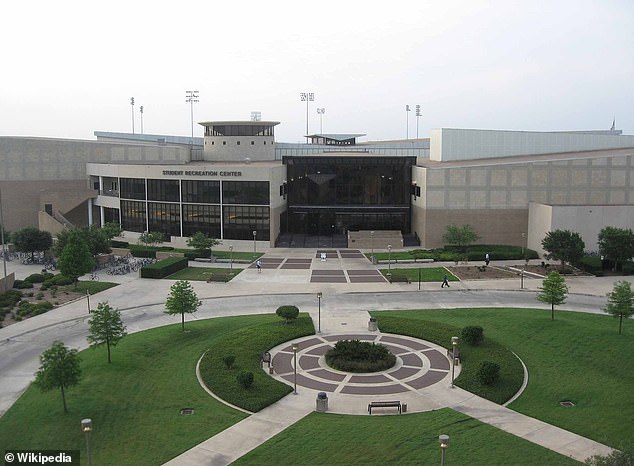 A Texas A&M University (pictured) spokesperson insists the decision is down to a lead scientist retiring, adding the research centre will still work with dogs bred by another facility

‘It was decided Texas A&M would have the dogs bred by another research facility, so the last litter of puppies was born in March.’

She added the university has not yet picked a facility where the dogs will be bred going forward.

The ongoing project still has sufficient funding to last two or three years, ‘and can always apply for more’, Ms Brown said.

WHAT IS DUCHENNE MUSCULAR DYSTROPHY?

DMD is caused by an absence of dystrophin, a protein that helps keep muscle cells intact.

The first symptoms are usually seen between three and five years of age and worsen over time.

Life expectancy is usually in the 20s, though more and more sufferers are living into their early 30s.

The disease often occurs in people without a known family history of the condition and primarily affects boys, but in rare cases it can effect girls.

DMD occurs in about one of every 3,500 male infants worldwide.

The disease causes loss of movement, weakness, and eventually death.

It is a severe type of muscular dystrophy and symptoms usually begin between three and five years old and worsen until a patient can no longer walk and function on their own.

More than 90 per cent of patients are wheelchair-bound by 15.

Duchenne muscular dystrophy is carried on the X chromosome and is a recessive gene.

It occurs almost exclusively in boys as female have two X chromosomes which greatly reduces the likelihood of the disease.

In boys, only the one gene is needed to produce the illness where as girls would need to have two chromosomes with the faulty gene.

This would only be possible if a male sufferer had a child with a female who was a carrier of the condition.

Women can be a carrier of the illness with no symptoms.

PETA first started campaigning against TAMU’s research after obtaining hidden footage taken inside where the dogs are housed.

The organisation claimed the ‘extremely thin dogs’ were ‘fed a kind of gruel’, with some spending ‘years on slatted floors, denied even a blanket’.

In December 2016, TAMU released a statement saying the footage was from ‘several years ago’ and released with ‘no context’.

The university claimed, for example, a dog shown drooling was ‘coming out of anesthesia after awaking from a cardiac MRI’, Rolling Stone reported.

It added ‘drowsy behaviour is common for an animal – or human – in recovery after a procedure’.

And the so-called ‘gruel’ was actually ‘food of the highest nutritional value’.

TAMU added the canines already had DMD and were not bred to develop the disease. But the university told KBTX last week part of that statement was incorrect.

TAMU also censored messages on its Facebook page via a filter that automatically deleted posts with words like ‘PETA’ and ‘cruelty’, Culture Map Dallas reported.

PETA later won a lawsuit to restore the ‘First Amendment’ on the public’s right to comment.

TAMU has reportedly repeatedly turned down KBTX’s request to tour their laboratory.

A reporter from Dallas was allowed around the facility recently, but without any audio or video devices.

Ms Brown argued ‘it would have added unnecessary fuel to the fire and legitimised an inaccurate depiction of the research going on here’.

Although PETA welcomes the news TAMU is scaling back its animal experiments, the organisation is not convinced by all the university’s claims.

Dr Alka Chandna, vice president of laboratory investigations at PETA, said: ‘Even as university officials were stating the school wasn’t breeding dogs to suffer from the devastating muscle disease, as many as 100 puppies were born in the campus laboratory.

‘We will not rest until Texas A&M university take the next step, which is to close down that laboratory and for the 35 or so remaining dogs that remain there, to adopt them out into decent homes.’

Ms Brown argued it is ‘critical when researching some diseases’ to use animals. In 2017, the US Food and Drug Administration (FDA) approved the school’s research for human clinical trials in DMD.

The FDA requires therapies be proven safe in animals before they can be tested in humans.

The DMD research, which began in 2012, is ‘rigorously overseen’ by ‘multiple organisations’, including the US Department of Agriculture and TAMU’s Institutional Animal Care and Use Committee, the university claims. 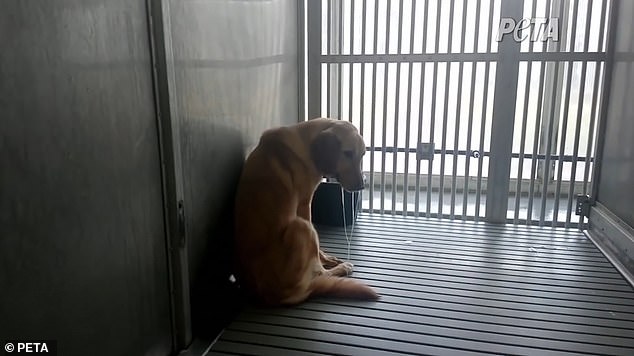 TAMU claimed a drooling dog (pictured) was ‘coming out of anesthesia after awaking from a cardiac MRI’. It added ‘drowsy behaviour is common for an animal in recovery’.

An online petition calling for the experiments to end was signed by more than 200,000 people. They pointed out ‘studies with these dogs haven’t led to a cure or even a treatment to reverse disease symptoms after experimenting for 30 years’.

Among the campaigners was muscular dystrophy sufferer Johnathon Byrne. Mr Byrne was detained by TAMU after asking to see the dogs. He later filed a lawsuit claiming his civil rights had been violated, Culture Map Dallas reported.

Paul McCartney wrote a letter to the university’s president Michael K. Young in June after learning about the experiments while on tour in Texas. 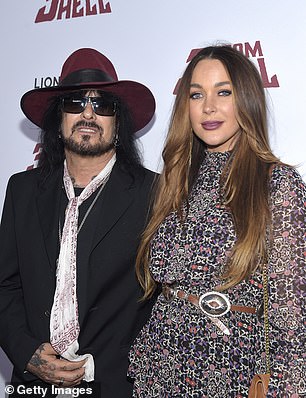 Nikki Sixx, bassist of the band Mötley Crüe, called for a boycott of TAMU. He is pictured with his wife Courtney in LA on September 16

He called the research ‘heartbreaking’ and referenced his childhood dog who inspired the song ‘Martha My Dear’.

Upon seeing PETA’s footage, rockstar Nikki Sixx called for a boycott of TAMU.

Sixx, bassist of the band Mötley Crüe, said ‘this is no life for “man’s best friend”‘.

As well as TAMU, PETA also obtained hidden footage from the Alfort National Veterinary School in Maisons-Alfort, France. The school similarly experiments on dogs bred to develop diseases like DMD.

Footage showed one laboratory employee admitting, ‘I wouldn’t like to be in the beagle’s place’.

A representative even said the school would lose funding if the public saw the condition of their dogs.

Advocates for animal testing argue they must be used where there is a need to find out what happens to a whole, living body.

This aids scientific understanding of how the body works, as well as acting as a model to study disease and develop new treatments, according to animalresearch.info.

Andrew Wheeler, chief of the Environmental Protection Agency (EPA), set a goal earlier this month to eliminate all routine safety tests on mammals by 2035. The EPA is an independent agency of the US federal government.

The letter, dated June 26, was made public by PETA.

‘The video footage of golden retrievers in your university’s dog laboratory is heartbreaking,’ McCartney wrote.

‘I have had dogs since I was a boy and loved them all dearly, including Martha, who was my companion for about 15 years and about whom I wrote the song “Martha My Dear”.’

‘Please do the right thing by ending the suffering of dogs in TAMU’s muscular dystrophy laboratory and switching to modern research methods instead.’