A motorist reported an unusual car problem to authorities after discovering a 12-ft python lurking in his car engine.

Shopkeeper Tee Natwijit, 57, was horrified when customers told him they had seen the python’s tail wiggling out from under the bonnet.

The unusual video shows the huge snake, which weighed a whopping 30kg, wriggling and writhing as it is coaxed out of the engine with a handling stick by animal handlers.

Natwijit ran over to his Isuzu Grand Adventure 4×4 and recoiled when he lifted the lid and saw the massive creature glaring back at him.

He quickly slammed it shut and called local animal handlers. They arrived and dragged out the large snake from under the hood where it had curled around the engine. 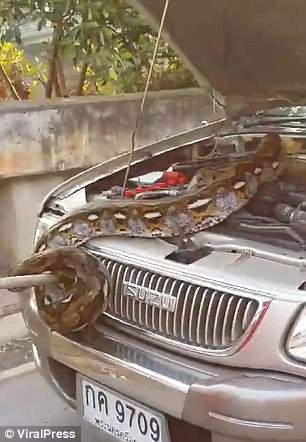 Shopkeeper Tee Natwijit, 57, was horrified when customers told him they had seen the python’s tail wiggling out from under the bonnet

The handlers were able to safely remove the snake and it has been released back into the wild.

Shocked Tee said: ‘Lots of chickens have been going missing one by one recently. I think this snake is to blame.

‘I don’t want to think about it. If I had started driving and the snake but my leg, I am having nightmares about that already. ‘

Rescue worker Kritpol Poolsong, 23, said the snake was caught with a lasso and stuffed into a bag to be released back into the wild. 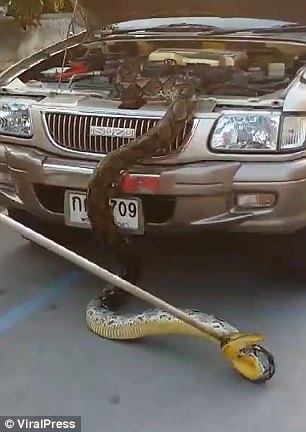 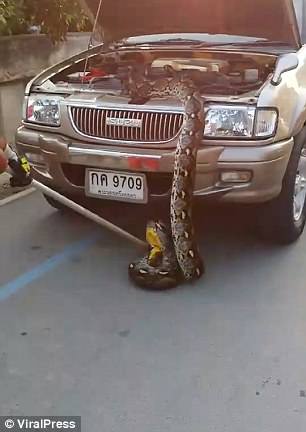 Animal handlers coax the snake out from under the hood with a lasso. After it was safely removed, the 12 foot python was released into the wild

He added: ‘When there is heavy rain and the climate becomes cooler snakes will look for somewhere warm and dry. Car engines are perfect for them. People should check before they start driving.’