Thai police investigating the alleged rape of a British teenager on the holiday island of Koh Tao say they have found no forensic evidence or witnesses of an assault.

The 19-year-old claims she was drugged while drinking on Sairee Beach, and later woke up on the sand with no underwear on, next to an unknown man who had sexually assaulted her.

Police are now questioning the teenager’s account of the events, which allegedly took place on June 26, claiming she would not have been able to drink on the beach as it was flooded by the tide.

The 19-year-old Briton claims she was drugged and raped on Sairee Beach, Koh Tao, but police, pictured walking on Sairee Beach during a press conference, say they have found no forensic evidence or witnesses to back her allegations

The victim states she was raped in the early hours of June 26, and that she did not know the alleged attacker – who local media reported had been ‘smiling’ after sexually assaulting her.

A friend also reported seeing the same man ‘checking up on the victim’ as she left the bar on Sairee Beach that evening.

The teenager, who cannot be named for legal reasons, was allegedly too scared to report the rape, but told local police she had her phone and 3,000 baht (£71) stolen.

She left Koh Tao on June 26, and then attempted to report her ordeal to the police on nearby Koh Phangan police. The girl’s family claims officers refused to take any details of the rape as it was not part of their jurisdiction.

The teenager reported the crime upon her return to the UK, after which the Thai police have independently begun investigating the alleged rape. 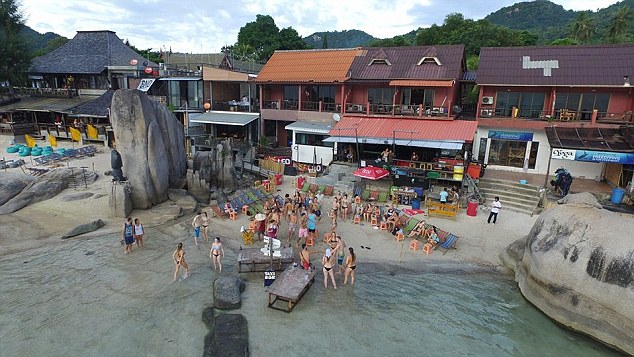 The local Tourist Police have stated that they do not believe the assault took place as they have not found any forensic evidence or witnesses to support her claims.

Deputy tourist police chief Maj. Gen. Surachate Hakparn said Sairee Beach had been flooded by the tide on the evening of the attack.

‘Seawater flooded the beach and almost entered the Leo pub so it was impossible for anyone to eat or drink on the beach that night.

‘Moreover, World Cup matches were also being broadcast at the time and there were a lot of people, as well as police, in the area,’ he told

He also stated that it would have been ‘impossible’ for her alleged attacker to carry her away from the bar without anyone noticing – despite neither the teen nor any witnesses making such a claim.

It is not known what kind of drug the teenager may have been subjected to, however substances known as ‘date rape drugs’ do not have necessarily render a victim unconscious.

Surachate added that Thai Police are ‘open to new evidence’ and said they are willing to take the victim’s statement in the UK ‘if she does not feel safe [in Thailand].’

This comes after her mother claimed the teen fled Koh Tao without reporting the crime because she feared for her life. 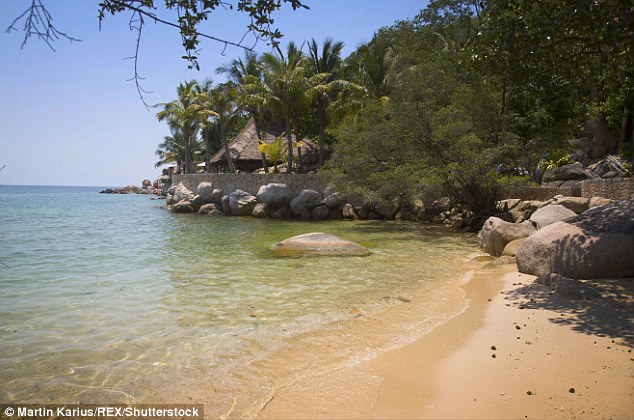 In an interview, the girl’s mother said she would ‘never let my daughter return to Thailand’ and offered to go instead before the three-month limit for reporting a crime passes.

Speaking from her home in the UK, she said: ‘She was having a fantastic time. She had an amazing time working at an orphanage in Sri Lanka then went to meet her friends in Koh Phi Phi [in Thailand].

‘The [British] police have the t-shirt so what more evidence is there? This is the trouble, it’s her word against them, the whole of the police force of Koh Tao and Koh Phangan.

‘The British Embassy is in touch with me, their hands are tied too, aren’t they? Nobody really knows what to do because it’s so dark.

‘I’m not letting my daughter go back to Thailand. I will go back, I’ve been in touch with the FCO and they said they would be happy to meet me and keep me safe.’

The three-month limit means the girl has until September to report the crime.

Her mother told local media: ‘This island is run by two mafia families who cover up, sickly cover up, somebody or some people who enjoy spiking, raping and murdering.

‘It has to stop. My daughter is a survivor and she managed to come back (to Britain)’. 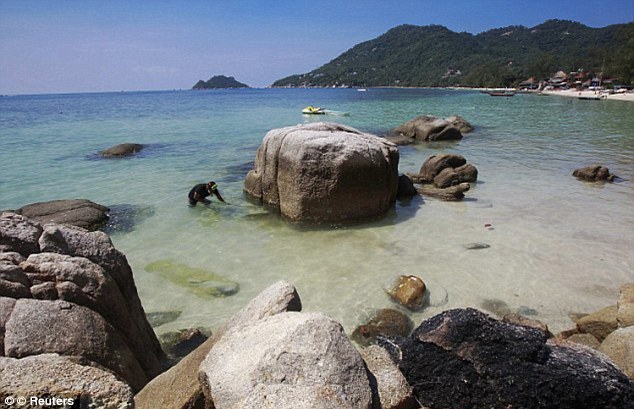 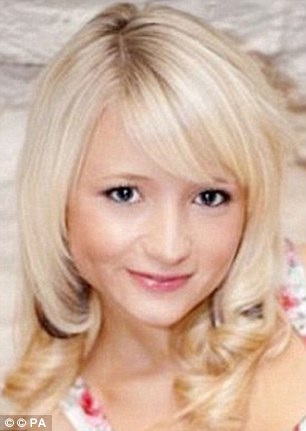 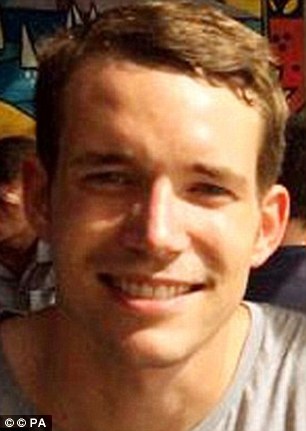 The safety of the idyllic Koh Tao island has been questioned for years, and were heightened after the murders of  Hannah Witheridge, 23, from Great Yarmouth, Norfolk and David Miller, 24, from Jersey in 2014.

Ms Witheridge had been savagely raped and beaten to death and Mr Miller had been beaten unconscious and left to drown in the incoming tide on Sairee Beach.

Zaw Lin and Wai Phyo were sentenced to death for the killings. But although Mr Miller’s family called the verdict ‘justice’, the trial of the two Burmese migrant workers was plagued by accusations of human rights abuses.

The men, apprehended soon after the pair’s bodies were found, initially confessed to the crime only to retract their statements amid claims they were extracted by torture.

Four other Western tourists, including three more Britons, have died on the island in the years following their deaths and the family of some of the deceased accused local police of not investigating the deaths properly.

Koh Tao has become a huge draw for young backpackers thanks to its stunning beaches and cheap accommodation. As many as 750,000 Britons visit each year.