Thailand’s new king today led a procession of his father’s ashes through the streets of Bangkok after he picked bits of charred bones and remains to be enshrined as relics following a spectacular cremation last night.

The procession was part of an elaborate, five-day cremation ceremony that drew hundreds of thousands of black-clad mourners to Bangkok’s historic old quarter.

King Bhumibol was the world’s longest-reigning monarch when he died a year ago aged 88. 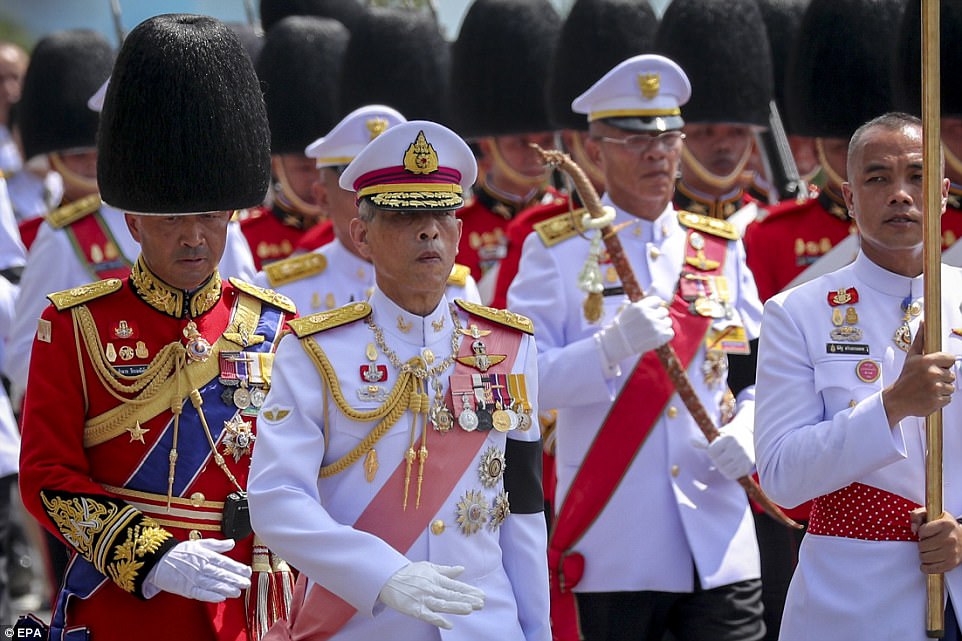 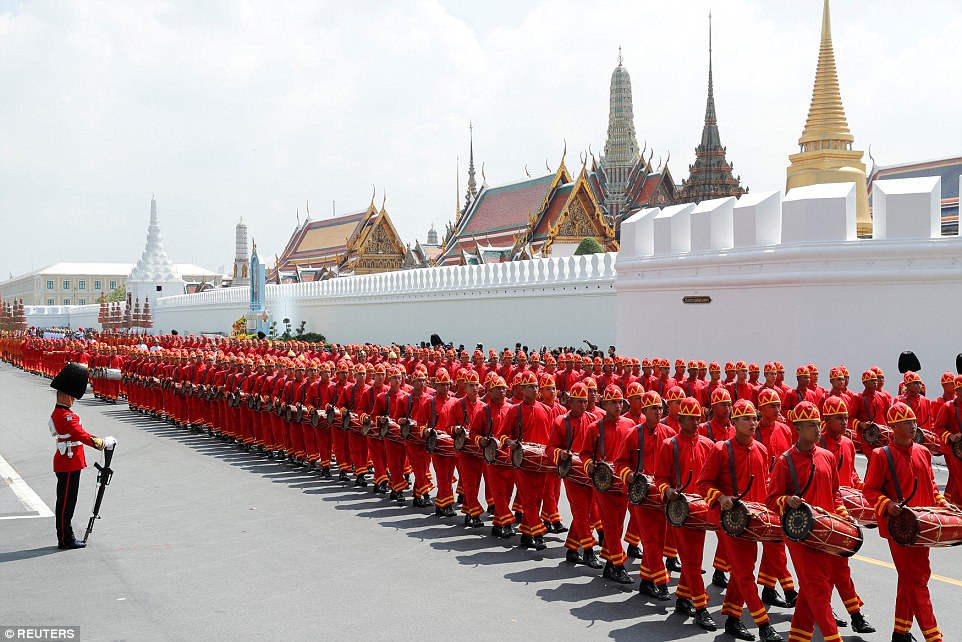 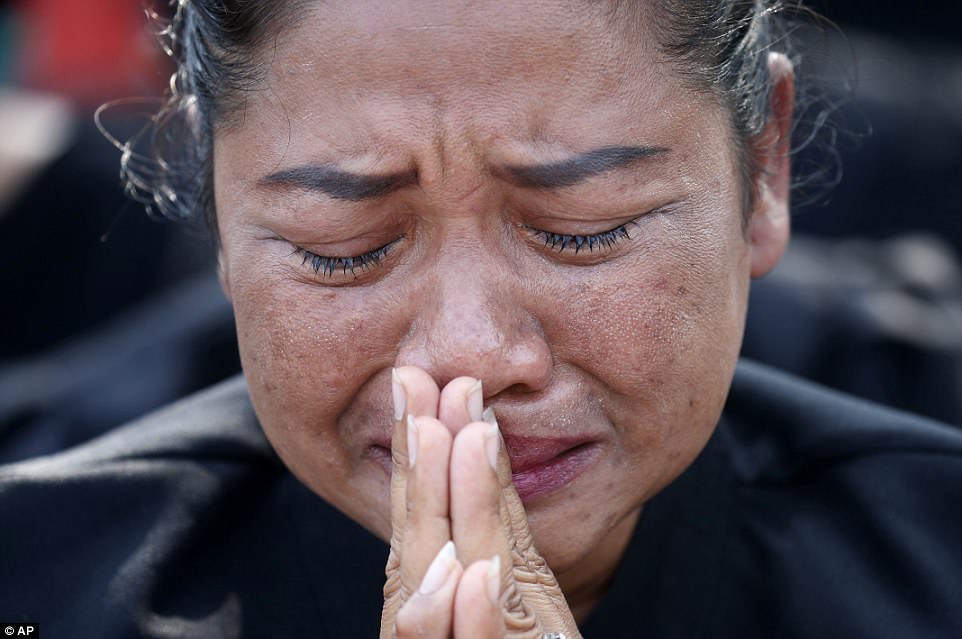 Grief: A mourner cries as participants march in religious rituals to move the ashes of the late King Bhumibol Adulyadej

King Maha Vajiralongkorn, presided over the burning of his father’s remains in a golden crematorium at a late-night ceremony in the Thai capital on Thursday.

Thousands of mourners stayed to watch as smoke rose from the crematorium with many sobbing and crying loudly.

The crowds had diminished on Friday, but thousands of people still lined the streets to glimpse what they could of a ceremony that in total cost $90million. 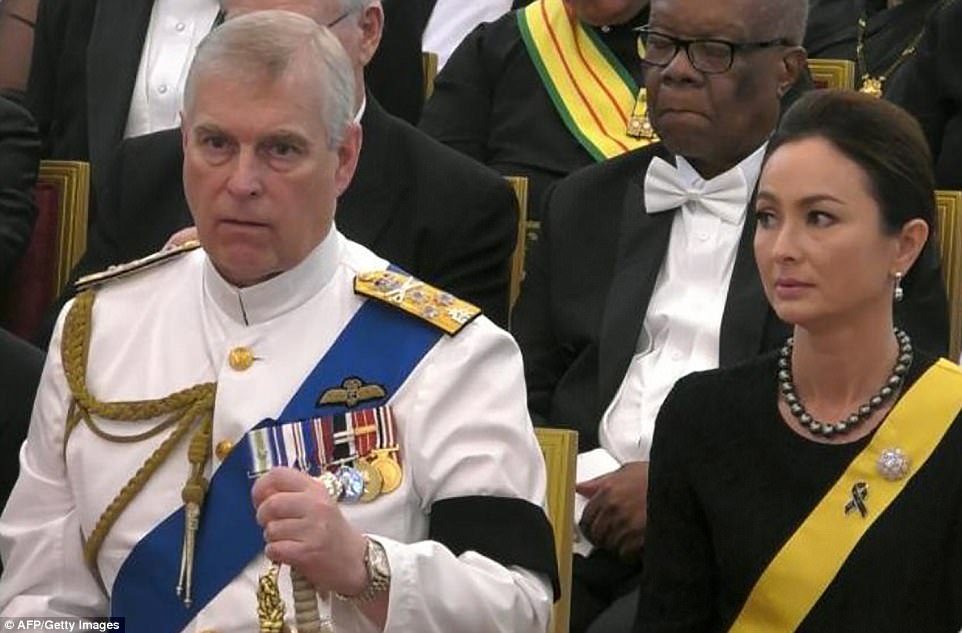 Prince Andrew was among the attendees at the ceremony for the Thai King on Thursday night as a royal guest. He is pictured with Malaysia’s Perak state Queen Zara Salim 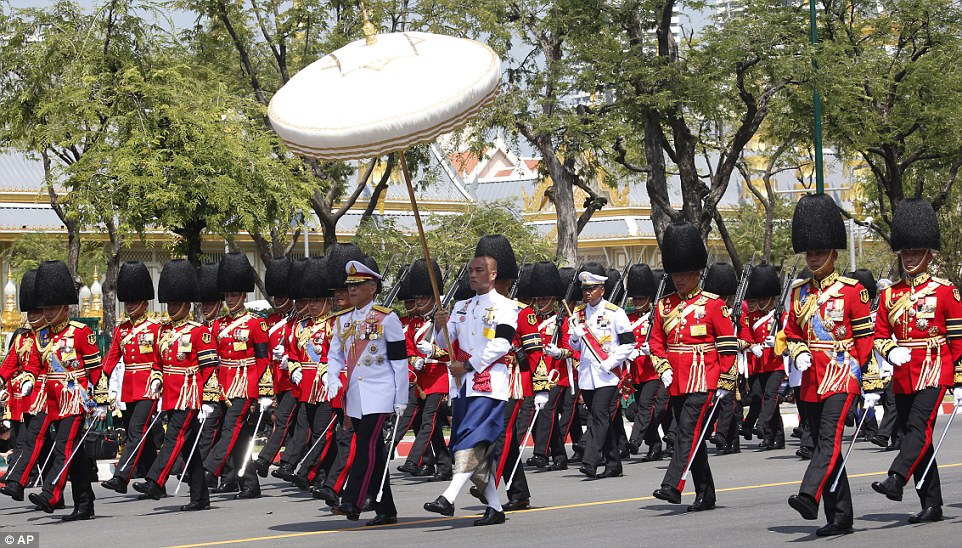 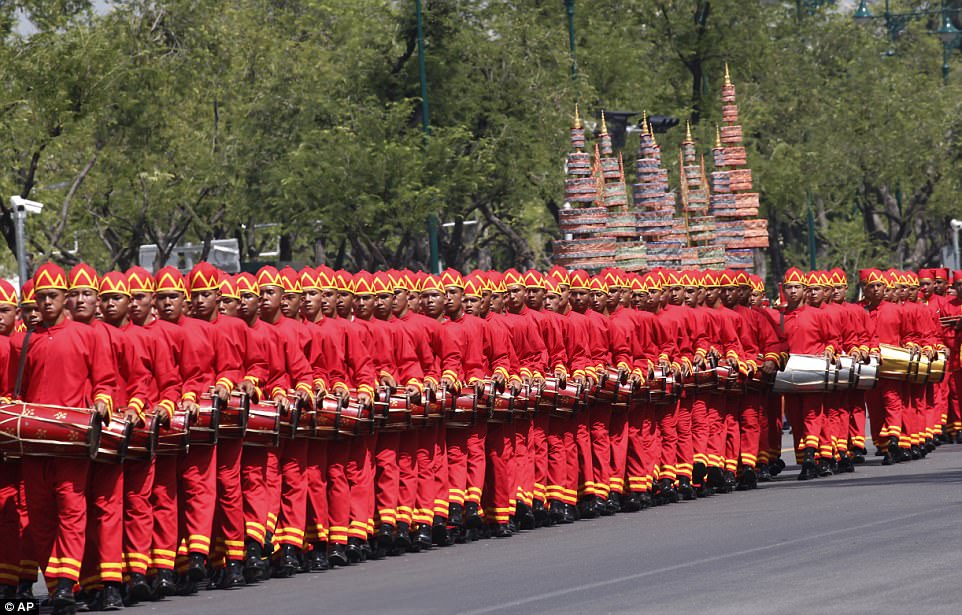 Procession: Dozens of drummers march in religious rituals to move the ashes of the late King Bhumibol Adulyadej 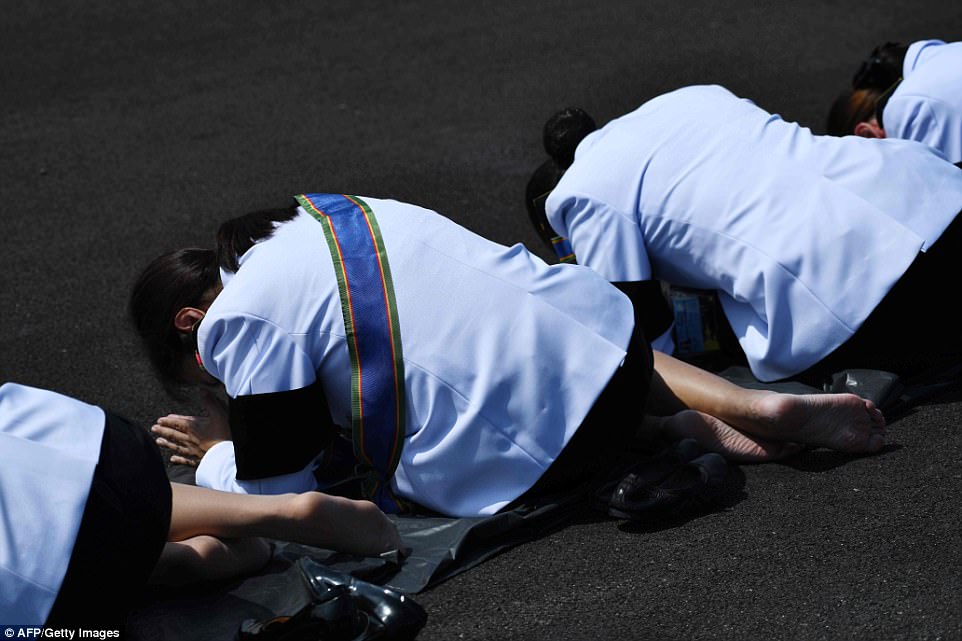 Outpouring of grief: Mourners lined by the roadside gesture during the funeral procession of late Thai king Bhumibol Adulyadej 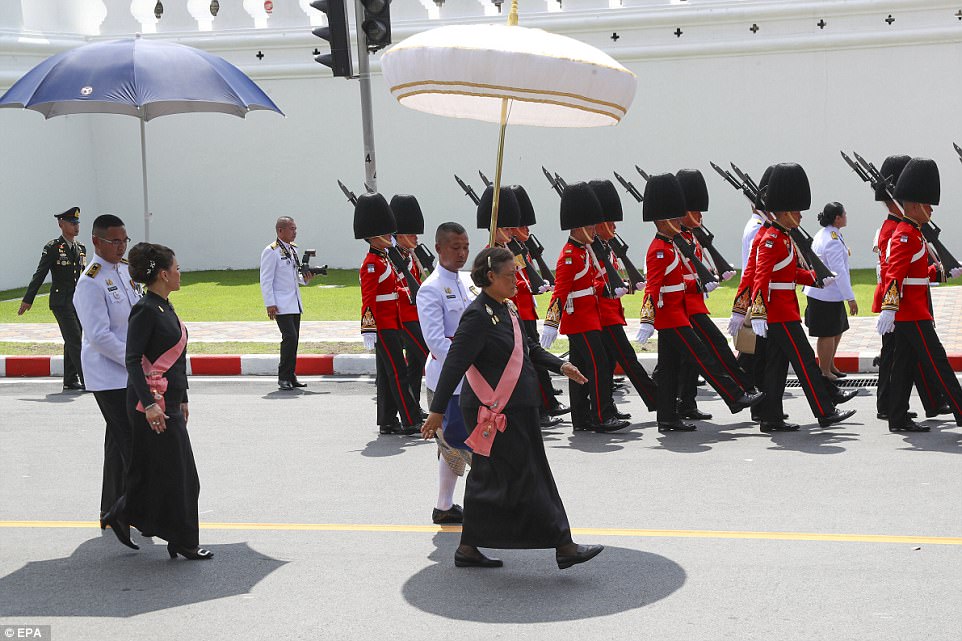 ‘I can’t express my sadness at the loss. It’s like a child longing for a parent,’ said Boonpherm Buatho, 56, a housekeeper.

Shielded from the sun by a large white-and-gold umbrella, King Vajiralongkorn led a religious ceremony to return his father’s remains to the palace. He sprinkled the bones with sacred water as classical Thai music played.

The remains were blessed by Thailand’s Supreme Patriarch, the head of the order of Buddhist monks. The late king’s bones will be taken to the Grand Palace, where he had lain in state since his death last October.

Although Thailand does not conduct polls on the monarchy’s popularity – partly because of strict laws that protect the royal family from insult – the king built up a wide personal following and is often referred to as ‘father’.

The ceremony on Thursday brought Thailand to a standstill as many businesses, including banks, shut to honour the late king. 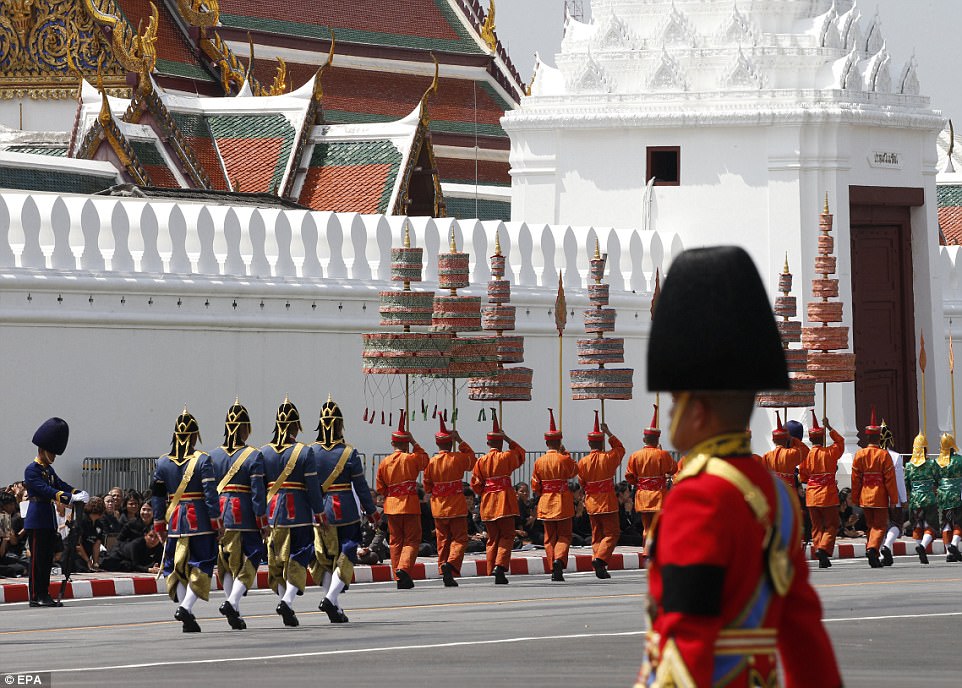 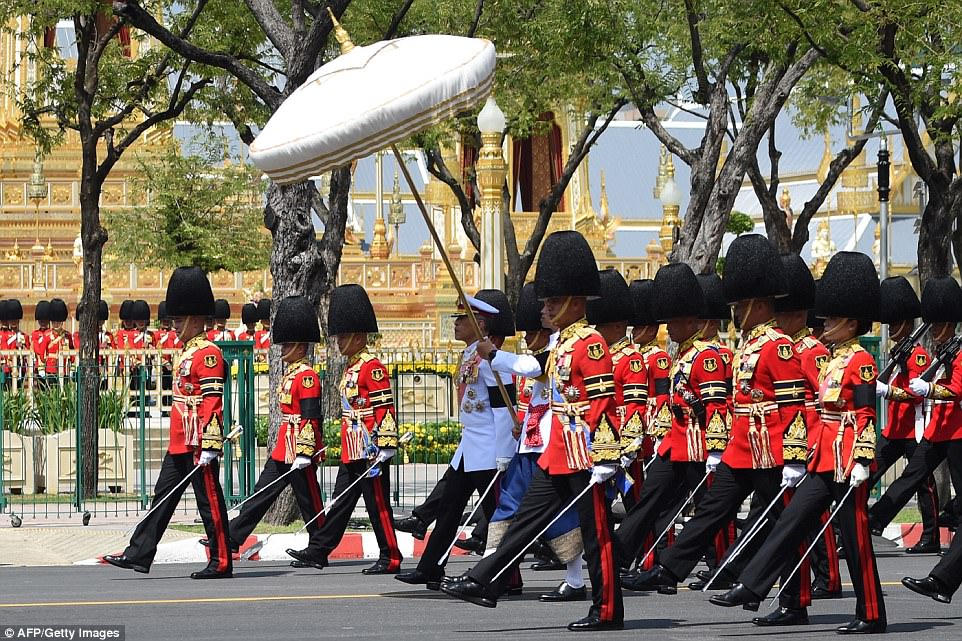 Shielded from the sun by a large white-and-gold umbrella, King Vajiralongkorn (centre) led the religious ceremony

The late king’s nine-spired crematorium, built to honour the ninth king of the Chakri Dynasty, features intricate carvings and staircases with sculptures of nagas – a half-human, half- cobra beings – among other mythical creatures.

Pictures of mourners wearing black and holding photographs of the late king flooded social media in Thailand, with many using popular hashtags such as #rama9, #kingofkings, and #thegreatestking.

On Saturday, a religious ceremony for the late king’s remains will take place within the palace.

On Sunday, the bones will be transferred to the palace hall where the relics of past kings are kept. A procession will then take his ashes from the palace to be divided between the temples of Wat Rajabopidh and Wat Bovoranives.

The first of those temples contains the ashes of many royals. The second is where King Bhumibol was ordained as a monk – a tradition for many Thai men – and is the centre of the strict Thammayut sect founded by the late king’s great grandfather.

Raised in Switzerland, Bhumibol ascended the throne aged 18 in 1946 after his elder brother Ananda Mahidol was shot dead in mysterious circumstances at the Grand Palace in Bangkok. 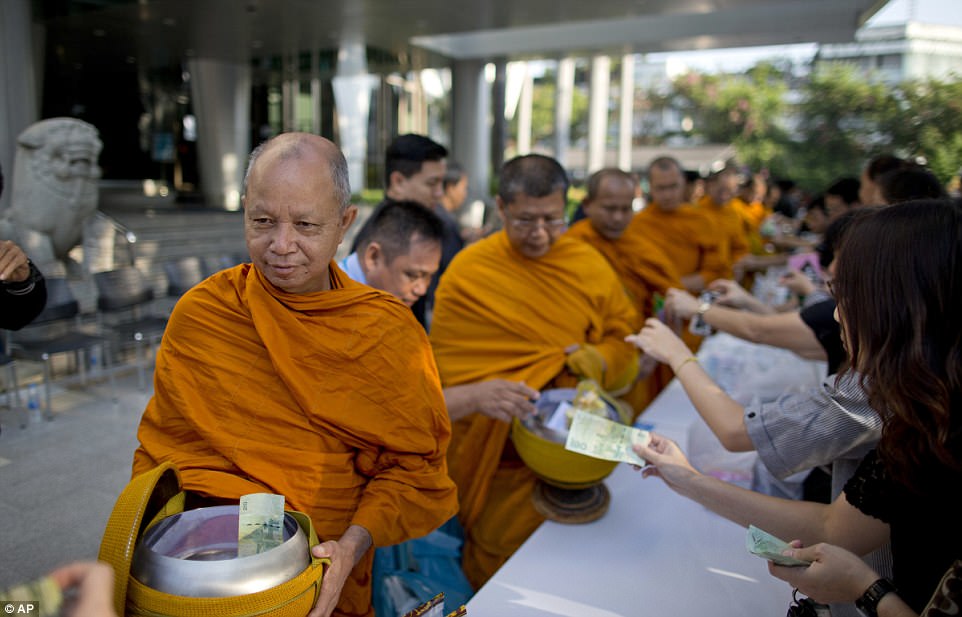 Thai mourners offer alms in Buddhist merit making ceremonies, a day after the cremation of their much-loved king 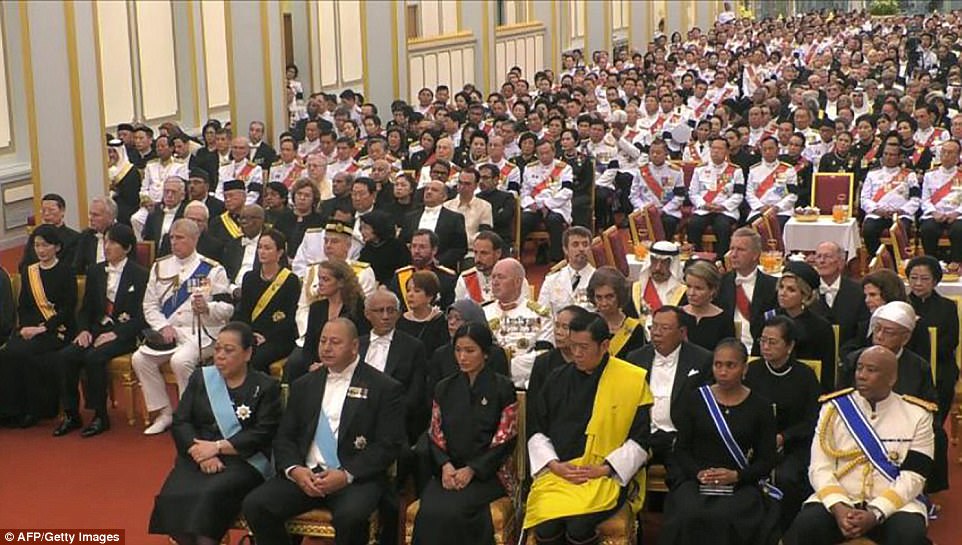 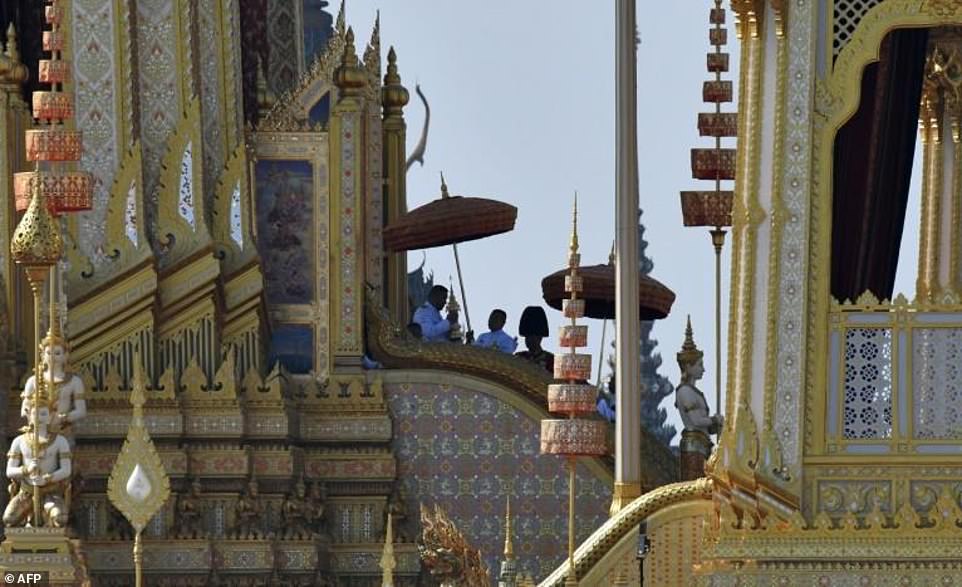 He was crowned four years later, inheriting a monarchy whose power was in steady decline. By time of his death, all of that had changed.

Bhumibol left behind one of the world’s richest monarchies, with the palace the pivot point of Thailand’s power networks including the influential military.

‘Thailand needed a king as rallying and unifying symbol and a young king found a people to rebuild a kingdom around,’ explained Thitinan Pongsudhirak, a politics professor at Chulalongkorn University.

A revival of antiquated palace rituals – including prostration in his presence – and spiritual duties gilded the throne, elevating Bhumibol to a semi-divine status.

That deification made scenes of his engagement with ordinary Thais even more remarkable to a nation awed by his work ethic.

Over years spent criss-crossing Thailand, Bhumibol seeded thousands of well-publicised royal projects in a poor, agrarian country that won him the moniker the ‘Development King’

His seven-decade rule spanned some of the most tumultuous moments in modern Thai history, including several coups, a deadly crackdown on student protesters, natural disasters and a regional financial crisis. 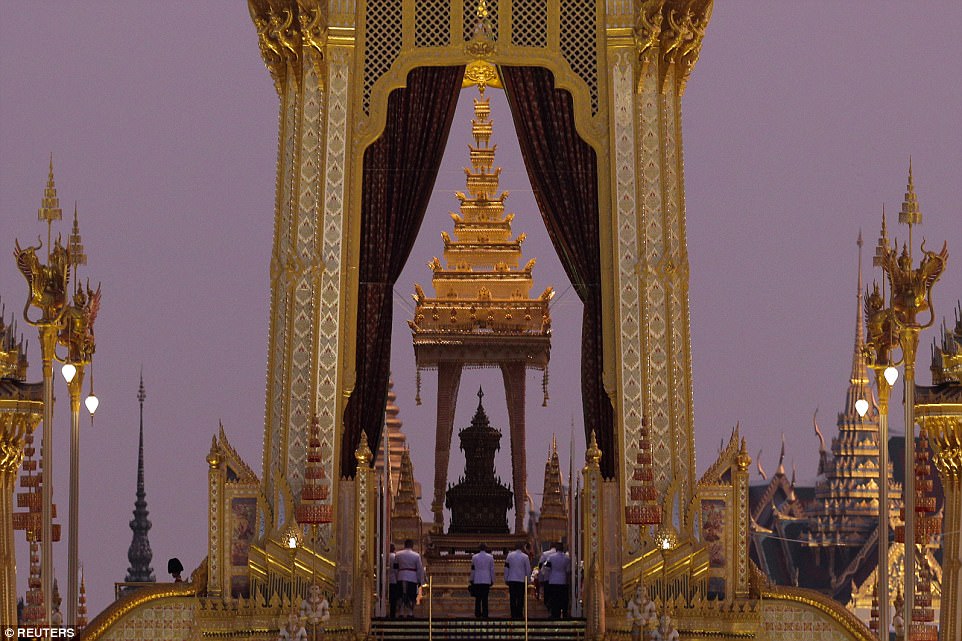 Thursday night: The Royal Urn of Thailand’s late King Bhumibol Adulyadej is seen inside the Royal Crematorium site during the Symbolic Royal Cremation near the Grand Palace in Bangkok, Thailand 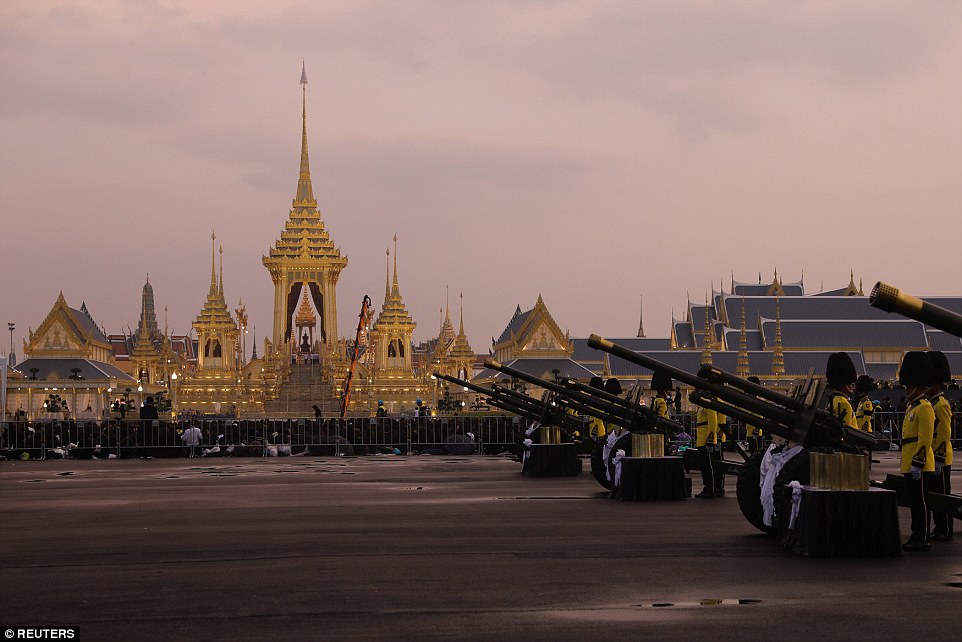 Thursday: The Royal Crematorium site is seen during the Symbolic Royal Cremation for Thailand’s late King Bhumibol Adulyadej near the Grand Palace in Bangkok