‘It’s not like they’ve grown’: Thalidomide survivor, 58, born with no arms and legs slams benefits officials after being required to prove he’s unfit to work three times in a year

Kevin Donnellon, a Thalidomide survivor, slammed the benefits system after being asked to fill in a 24-page ‘fit-to-work’ questionnaire for the third time. He was educated by the late Miss Pauline Skelly,hailed as Liverpool’s first female headteacher (Kevin shown holding her photo)

A man born without arms or legs has slammed the benefits system after being asked to fill in a 24-page ‘fit-to-work questionnaire for the third time.

Kevin Donnellon, a Thalidomide survivor, from Crosby, Merseyside was told he had to complete the questionnaire in order to keep receiving his benefits.

Kevin, who’s 58, was one of around 2,000 babies affected by the morning sickness drug Thalidomide.

‘It’s not like my arms and legs have grown,’ he said.

The dad-of-two worked hard up until 15 years ago when he began to suffer back problems from wearing prosthetic legs and health complications from type 2 diabetes.

Kevin has a degree in social sciences and has worked with adults with learning disabilities. Deteriorating health has forced him to take a step back in recent years.

‘I’ve got severe backache from the artificial legs I used to wear – they weren’t the fantastic prosthetics you get these days.

‘This government seems to have targeted disabled people.

‘I have a lot of disabled friends who are terrified when they get these letters they’re going to have benefits taken away. 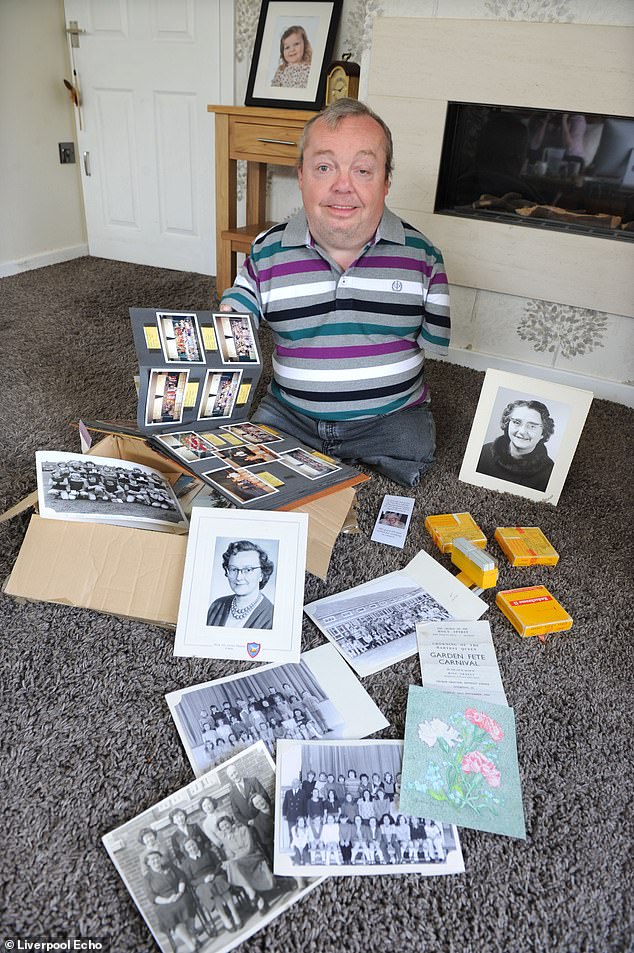 The 58-year-old, from Crosby, (pictured) was told he had to complete the questionnaire in order to keep receiving his benefits. He was educated by the late Miss Pauline Skelly, hailed as Liverpool’s first female headteacher. Kevin is pictured looking through a box of photographs & memorabilia from Miss Skelly, which was passed onto him from her neighbour

‘Twice in the last year I’ve had to fill in questionnaires. Now I’ve a third, due back on December 25. Merry Christmas.

‘It feels vindictive. The questions are intrusive, very personal.

‘I was born like this – you’d think my details would be on the system.’

The ‘fit-to-work questionnaire is not the only paper work Kevin has been forced to fill in. 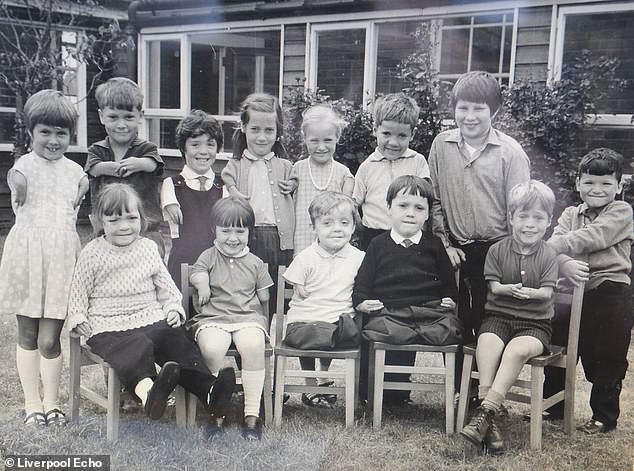 He also had to fill out a form for PIP payments to replace his Disability Living Allowance, and two ‘capability for work’ forms for Universal Credit, to replace Employment and Support Allowance.

He said: ‘I’ve worked in the past, but I can’t do anything full-time. All these cuts are simply cruel.’

The DWP said the reassessments were part of the transition from DLA to PIP and those with life-long conditions would then only have ‘light-touch’ 10-year reviews.

A spokesman added: ‘Mr Donnellon has been awarded ESA indefinitely following a recent reassessment and the highest rate of PIP with a light-touch review in 10 years.’