Britain’s biggest water company has been ‘put on report’ following a spike in written complaints.

Thames Water, which serves 15million homes and businesses across London and the South, is among four suppliers reprimanded by watchdogs.

The Consumer Council for Water has told them they must produce evidence every three months to show they are improving their performance.

It said more than two million calls were made by households in 2018-19 over supply and billing problems.

Thames saw complaints rise by almost a quarter compared with 2017-18.

Northumbrian Water, Essex and Suffolk Water and Hafren Dyfrdwy in Wales were also cited by watchdogs.

Almost half of all grievances related to problems with a bill or charges, but there was also a 28 per cent rise in complaints about water supply and pressure as some companies struggled to cope with the impact of the bitterly cold spring last year and a sweltering summer.

The Consumer Council for Water said: ‘No other company received more complaints about its water supply than Thames Water, which must now provide quarterly reports on its progress after being named among the industry’s worst performers.

‘It was one of the main reasons England’s largest supplier experienced a 24 per cent rise in written complaints, with 10 per cent more customers having to pick up the phone to resolve an issue with their service.’

The findings of the official consumer body are the latest evidence of a record of failure at Thames, which is owned by a holding company whose largest shareholders are the Canadian pensions group OMERS, the BT Pension Scheme, the Abu Dhabi Investment Authority, the China Investment Corporation and the Kuwait Investment Authority.

Earlier this year, it was revealed the company had missed targets to reduce the amount of treated tap water leaking from its pipes.

The company lost an average of 690 million litres of water every day in 2018-19. This was 78 million litres above the official target and enough to supply all the daily water needs for showering, flushing the toilet and cooking of some 4.8 million people.

In June, hundreds of thousands of people were left without tap water, forcing the closure of schools, GP surgeries, pubs, restaurants and cafes, after a pipe burst at a pumping station in south west London.

A much wider and longer loss of supply was seen in early 2018 following a spate of pipe bursts associated with the big freeze linked to the ‘Beast from the East’. 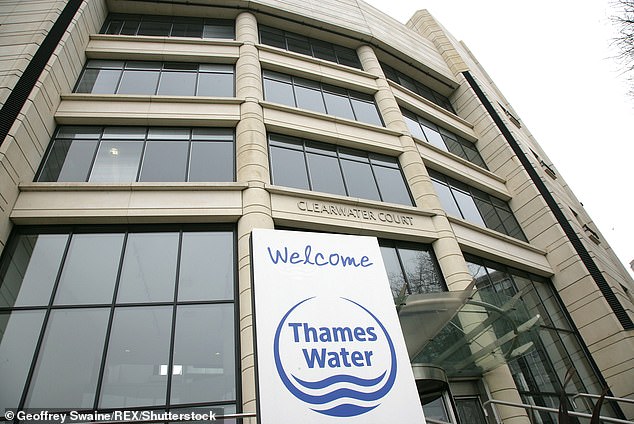 Thames Water (pictured, its headquarters in Reading), which serves 15million homes and businesses across London and the South, is among four suppliers reprimanded by watchdogs

The three other companies put on report over the number and handling of complaints are Northumbrian Water, Essex and Suffolk Water and Hafren Dyfrdwy, in Wales, where a change in the billing system caused enormous disruption.

Chief Executive of the Consumer Council for Water, Tony Smith, said: ‘Far too many customers are having to waste their time and suffer the frustration of disputing unclear or inaccurate bills.

‘In the autumn we’ll be bringing the whole industry together to try and improve the standards of billing, as well as demanding a significant fall in the complaints made to the four poor performers named in our report.’

Thames Water accepted there have been problems, but insisted it has been making improvements since the spring of this year.

Its customer experience director, Kelly Macfarlane, said the company had experienced a perfect storm of weather and other issues that had an ‘unacceptable impact on our customers’.

She added: ‘We feel and regret that deeply, and have already taken action to improve service and get things right first time for our customers when they need us.’