Four former Google employees who were fired last week for accessing and sharing internal documents and calendars, have said they will file charges of Unfair Labor Practice against the company.

Laurence Berland, Sophie Waldman, Rebecca Rivers and Paul Duke deny violating policies and claim before Google announced last Monday that they were fired, they were ‘subjected to interrogations, some of us for hours’.

The group claims on Medium that the California-based tech company used the alleged violations as an excuse to terminate them before Thanksgiving and notes that the timing was shortly after it was reported Google hired a ‘union-busting consultancy firm’.

In the letter titled ‘Google fired us for organizing. We’re fighting back’, the group claimed on Tuesday that their employments were terminated ‘for engaging in protected labor organizing’. 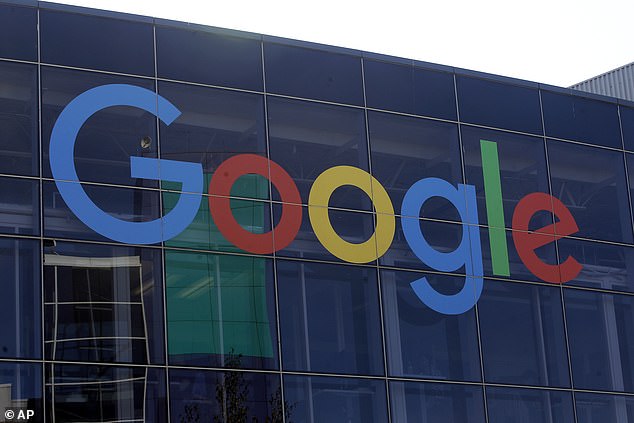 They were fired last week for accessing and sharing internal documents. Google told DailyMail.com Tuesday: ‘No one has been dismissed for raising concerns or debating the company’s activities’

‘All of us had our reputations smeared in the press as Google spread rumors that we were rule-breaking troublemakers who ‘leaked’ sensitive information,’ it continues. ‘This is flatly untrue.’

The authors alleged that ‘in the privacy of our meetings with HR and an internal investigations team, the company acknowledged this’, and advised viewers of their letter to conduct a ‘careful reading’ of Google’s statements to confirm their claims about the company.

Suggesting there’s a wider plan for Google’s work with IRI Consultants, the four claimed ‘it’s clear that their draconian, pernicious, and unlawful conduct isn’t about us’.

‘It’s about trying to stop all workplace organizing,’ the former staff alleged. ‘They count on the fear, the sadness, and the anger that we are all feeling to stop us all from exercising our rights, and to chill all attempts to hold one of the most powerful organizations in history accountable for its actions.’

Google will not name the four employees they fired.

In a statement to DailyMail.com on Tuesday, Google denied taking action in response to the employees debating company issues.

‘We dismissed four individuals who were engaged in intentional and often repeated violations of our longstanding data security policies, including systematically accessing and disseminating other employees’ materials and work,’ a Google spokeswoman said. ‘No one has been dismissed for raising concerns or debating the company’s activities.’ 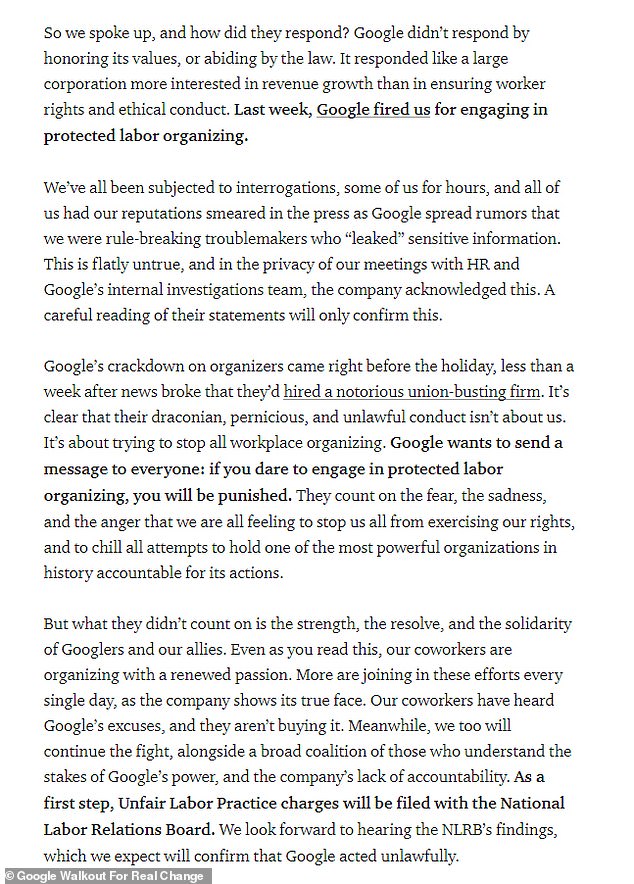 The letter claimed they had been ‘subjected to interrogations, some of us for hours’

The company has also been known for an open, collaborative work culture since its early days, one that employee activists say is now getting closed off.

Google recently changed its weekly employee live Q&A with CEO Sundar Pichai to a monthly meeting. It has also updated its community guidelines to tell employees to avoid ‘disrupting the workday’ to debate politics or other topics – both moves that some workers say are meant to discourage open speech and crack down on employee pushback.

Waldman and Duke helped create a petition earlier this year that called for Google to refrain from bidding on a cloud computing contract with U.S. Customs and Border Patrol. Nearly 1,500 employees signed the petition, which said CBP had ‘engaged in human rights abuses’ at the southern border and that Google should not work with the agency. 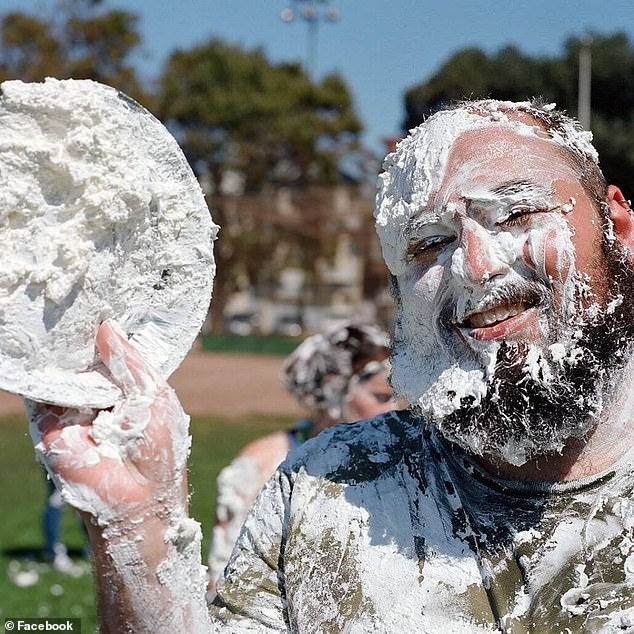 Laurence Berland is one of the authors of ‘Google fired us for organizing. We’re fighting back’ 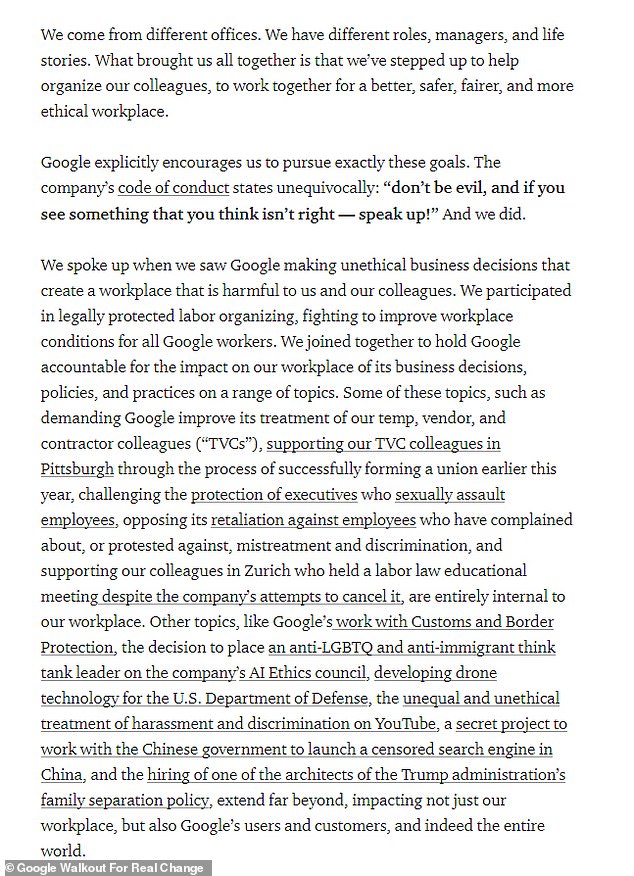 Rivers and Berland also helped spread the petition, and Berland has been involved in organizing other campaigns at the company, including those involving LGBTQ rights.

All four say they were questioned by Google officials in the past few months for sharing or accessing internal documents. Two say they were placed on administrative leave last month.

The company said it found one worker set up notifications to be alerted about other employees´ calendar changes, which made those employees feel unsafe. It said screenshots of their calendars with their names were shared externally.

The employees said any documents they viewed and shared were already accessible by Google workers, and they only shared them internally. They said others later shared them outside the company.

‘We have always taken information security very seriously, and will not tolerate efforts to intimidate Googlers or undermine their work, nor actions that lead to the leak of sensitive business or customer information,’ the memo sent by Chris Rackow, Royal Hansen and Heather Adkins from the company´s security and investigations team read.

The four fired workers said they received no severance payments. They are working with lawyers and have not yet determined the details of the NLRB complaint, but said it will address retaliation concerns and will likely take issue broadly with Google´s recent policy changes and alleged crackdowns against employee organizing.

Google reached a separate settlement with the NLRB in September over employees´ ability to speak out about workplace issues. Google agreed to post notices to remind employees of their rights, including the ability to talk to each other about workplace conditions and push for changes such as raises.

The situation of the four workers has led to additional protest. A few hundred people attended a rally at Google´s San Francisco office in November to call for Rivers´ and Berland´s reinstatement. 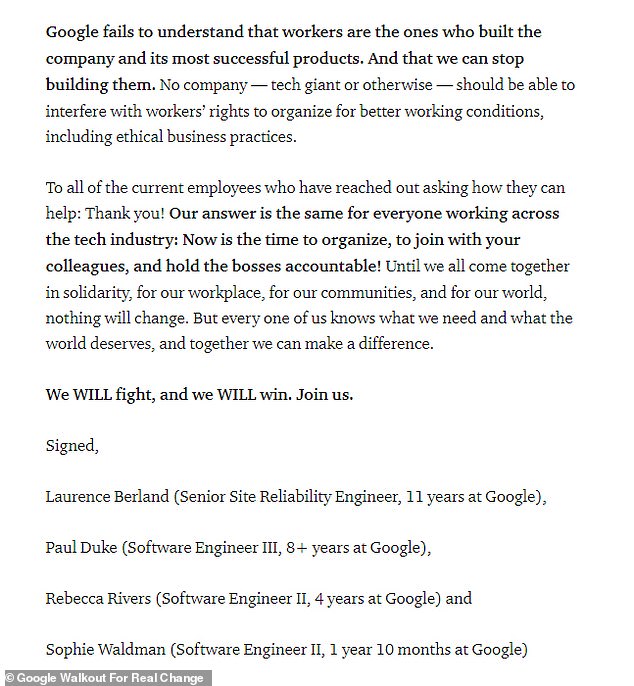