That’s chest perfect! How the right bra after cancer surgery can transform a woman’s self esteem

Working out the type of bra she would require post-surgery was, understandably, not at the forefront of Helen Addis’s mind when she underwent a mastectomy for breast cancer, at the age of 39.

‘I had so many things to get my head around and a mastectomy bra was not something I’d ever thought would be on my radar,’ she says of her diagnosis in April 2018.

‘When I did look them up, they all seemed beige and old-fashioned with wide straps.’

While choosing the right bra might seem trivial compared with a breast cancer diagnosis, for the four out of five women with the disease who need surgery it can be integral to their recovery.

Working out the type of bra she would require post-surgery was, understandably, not at the forefront of Helen Addis’s mind when she underwent a mastectomy for breast cancer, at the age of 39

As well as allowing the wound to heal without rubbing and chafing, it can boost self-esteem, say experts.

Yet many women in this situation don’t realise the difference the right bra can make, or can’t afford to buy one, according to the cancer charity Macmillan Cancer Support, which last year provided grants for clothing worth over £400,000 to more than 3,000 women with breast cancer.

Helen had a grade 3 (aggressive) cancer in her right breast, which had spread to her lymph node, and she underwent a single mastectomy. She then had an expander put in — a deflated, temporary implant pumped up with saline every six weeks — for nine months, to make room for a long-term implant.

Helen says: ‘I was lopsided and my bra size kept changing. I muddled through with sports bras and didn’t prioritise post- surgical lingerie. It was very upsetting, if I’m honest.’

Not least as throughout this process, Helen underwent chemotherapy (16 cycles in total, before and after her surgery), followed by 15 radiotherapy sessions and 18 infusions of targeted hormone therapy, which finished in October 2019.

Now Helen, a TV producer on ITV show Lorraine, is raising awareness of a new scheme by the breast cancer charity Future Dreams, in conjunction with the retailer Next.

The range, which is also backed by Sky News sports presenter Jacquie Beltrao, who has been diagnosed with breast cancer for the second time, costs between £34.95 and £44.95 (a similar price to other specialist lingerie bras from retailers such as M&S).

Some of the bras are intended for wear six to eight weeks after surgery (and contain pockets for prostheses, if required), while others are for women who have not had breast cancer. 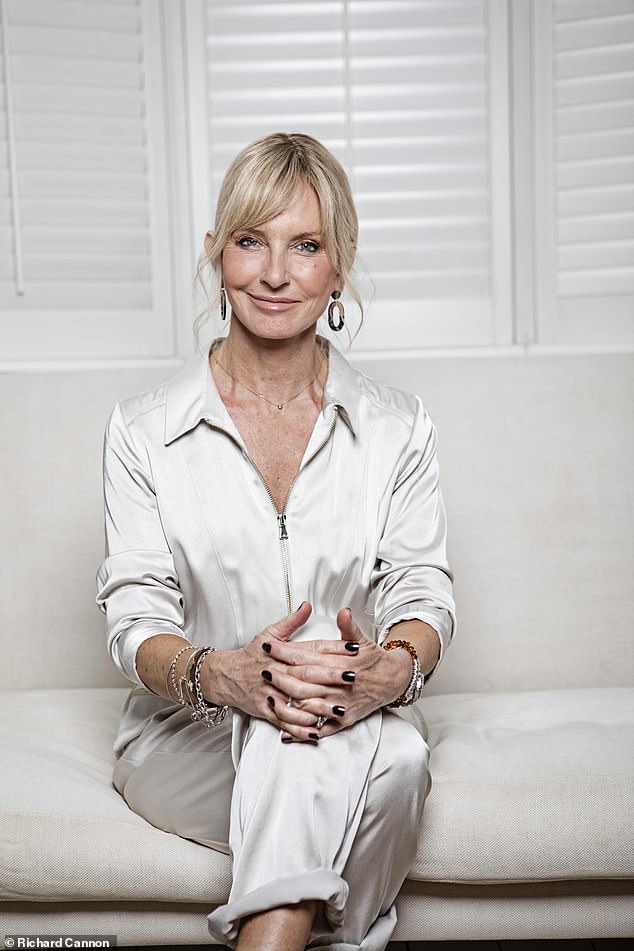 The range, which is also backed by Sky News sports presenter Jacquie Beltrao, pictured, who has been diagnosed with breast cancer for the second time, costs between £34.95 and £44.95 (a similar price to other specialist lingerie bras from retailers such as M&S)

As well as donating to Future Dreams 20 per cent of net proceeds on each mastectomy bra sold, Naturana will donate a post-surgical bra to a woman who needs one but can’t afford it, in the first project of its kind.

The problem of affordability was highlighted by research conducted by Future Dreams in 2019, when the charity spoke to panels of breast cancer nurses across different hospitals.

‘Susan’, a single mother-of-two, was diagnosed with breast cancer last year when she was working as a care assistant on a zero hours contract. She told Good Health: ‘After surgery I had to wear my old bra, which was uncomfortable because it was underwired. Then I was given a Sisterhood bra which was so much better.

‘I still wear it now. It really helped me financially because, at the time, if I was not working, I wasn’t being paid and I had to support my family.’

Helen, 42, who lives in Surrey with her husband Mark, 45, and three children Archie, 11, April, ten, and Belle, eight, credits the range (which, because of her involvement with the charity, she was able to wear before the launch) with helping to lift her spirits as she progressed through gruelling treatment.

She says: ‘The right bra can make such a difference in terms of mood that I wish I had prioritised it earlier.’

According to Joanna Franks, a consultant breast surgeon at University College London Hospital, the way the 55,200 women diagnosed with breast cancer each year in the UK are treated has changed dramatically over the past two decades, with greater focus on oncoplastic surgery — which combines breast cancer management and plastic surgery techniques.

‘We think a lot more about scar placement and how the breast will be shaped afterwards — considerations which weren’t made 20 years ago,’ she says.

Oncoplastic surgery ‘also allows us to offer breast conserving surgery, such as a lumpectomy, to women who previously may have only been offered a mastectomy’, she says. ‘For women undergoing a larger lumpectomy, it’s really important to think about where the seaming on subsequent underwear goes, so it doesn’t rub against a scar.’

She adds that ‘patients always ask what they can do to prepare before surgery — I tell them that they need a well-fitting and supportive post-operation bra’.

This is because the breast needs support after surgery to reduce post-operative complications such as bruising and build-up of fluid in the area treated.

‘Then, when a woman is healed a bit more, she needs a second-stage bra, depending on what kind of surgery she’s had,’ says Ms Franks.

‘For women who have had a mastectomy, they may need a bra perhaps with a pocket for a prosthesis, or if we have changed the breast size, a bit of padding.

‘Some women just don’t know where to go for help, but a signifi-cant proportion tell me that they won’t be able to afford it. It’s heartbreaking.’

Monica Harrington, a bra-fitter based in Camden, North London, says the range of bras on offer has improved in the 30 years she has been fitting women after breast cancer. ‘Now you can get prostheses in a range of skin tones and different shapes, not to mention bras with different pockets — or non-pocketed — to fit them,’ she says. However, finding the right bra for a woman following surgery is more than about providing the correct physical support.

‘Women in this position are often vulnerable and struggling to come to terms with this visible change in their bodies,’ says Monica. ‘You can see how their expression changes when you put them in the right bra — it’s nothing short of transformative.’

Julia Leckey, 47, who lives in Wimbledon, with her husband, Eddy, and sons Max, 14, and Freddy, nine, also struggled to find the right bra after having her right breast removed in 2014.

‘I had an implant put in after my mastectomy but the radiotherapy made it go rock hard,’ she says. ‘One side was my normal 34D breast and the other was this hardened implant. I must have bought about 26 different bras.’

Five years after coming through the treatment for the stage 3, grade 3 breast cancer (the stage indicating it has spread beyond the breast, and the grade, that it was an aggressive type), a mammogram revealed a new tumour in her left breast.

‘It was a different kind of cancer — a grade 2, stage 2, only 1cm across,’ says Julia, who recently published her first novel, Colourful Creatures. ‘I had a lumpectomy and then 12 sessions of chemotherapy, but I needed a full mastectomy on my right side in June last year as the cancer hadn’t shrunk enough for a lumpectomy.

‘Now I’ve got two implants. The more recent one looks like a great boob job, but the older implant is misshapen, so finding a bra that works is difficult.

‘I can’t wait to get one of these Sisterhood bras. They are going to help so many women. As my mother would say, a little bit of help is worth a lot of pity.’

The Sisterhood Bra range is available from Next.

Tea tree oil has antiseptic, antimicrobial and anti-inflammatory properties, which account for its most commonly known uses as treatment for skin conditions, including spots. The oil comes from the leaves of Melaleuca alternifolia, a small tree native to Australia.

One of the compounds it contains is terpinen-4-ol, which has been shown to kill certain viruses, bacteria and fungi. Studies, including one published in the journal Parasitology Research, have also shown that tea tree oil has insecticidal properties, too — in this study it was one of several plant-based oils that was shown to work more effectively than the established commercial mosquito repellent DEET.

Another study (published in the journal Medical and Veterinary Entomology) also found that 24 hours after being treated with tea tree oil, cows had 61 per cent fewer flies than those not treated.

The oil can be used as it is on a cuff or sleeve, but test it first to ensure it doesn’t stain. It should not be applied neat to the skin but only combined with a carrier such as olive, jojoba or coconut oil.