Paige Burnett and Sage Menzies always loved to play the game ‘Mermaid’, where they would dive down into a lake and search for hidden treasures.

But the Michigan friends got a whole lot more than they bargained for when they came across a practice bomb from World War I on Tuesday.

Sage, 9, and Paige, 10, had been swimming in Lobdell Lake in Argentine Township when something in the murky water caught their eye.

Paige Burnett, 10, and Sage Menzies, 9, were swimming at Lobdell Lake in Michigan on Tuesday when they discovered a practice bomb from World War I 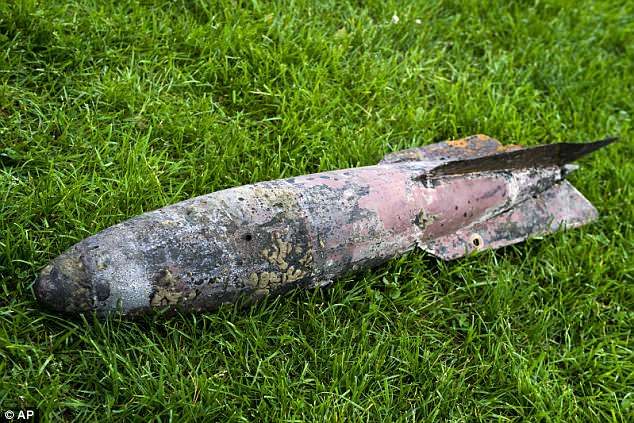 The girls had tried to pull out the item, which measured 3-feet, by themselves but needed the aid of Sage’s mom as it was half-buried in the sand

Paige ran her hand across the item and realized how big it could be. She tried to get Sage to help but it was stuck in the sand, according to MLive.

Sage’s mom came to the girls’ aid and they were able to pull out item, which measured 3-feet, out to shore.

At first, they had no idea what it could be. But after stepping back to take a closer look, the girls realized they had come face-to-face with a rusty bomb.

The girls were so proud of their discovery that they began to jump up and down.

‘We were super excited that we had found this instead of just something metal,’ Sage said. ‘We were saying, “We could be famous”‘. 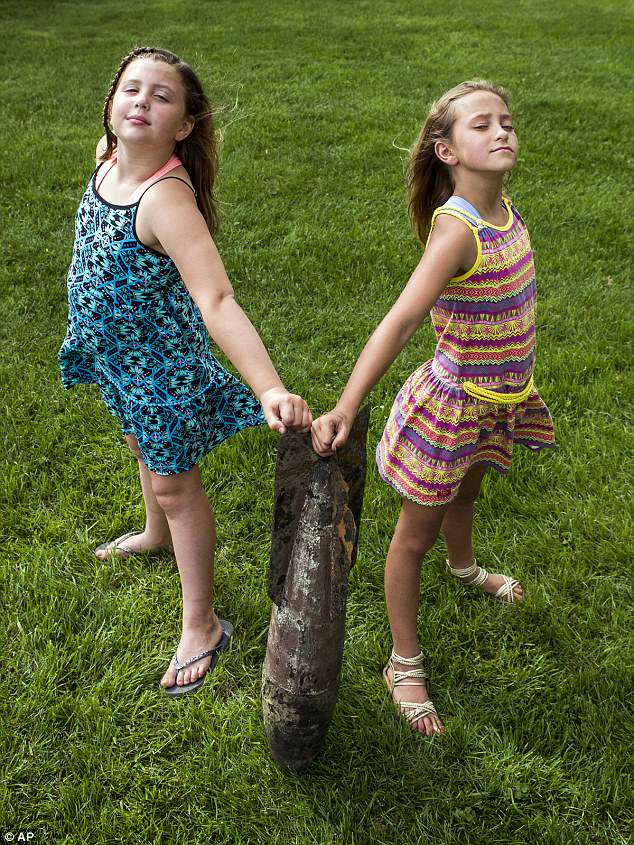 When they realized the item was a bomb, the girls’ families called the police, which then called the bomb squad for additional help

But when they realized it was a bomb, the girls became afraid.

‘I thought it was gonna explode,’ Paige recalled. ‘I was so scared.’

The adults at the beach told the girls to leave the bomb alone and they called the Argentine Township police, who also asked the bomb squad to come.

A hole was drilled into the bomb and, after only mud came out, was determined to be no longer active. 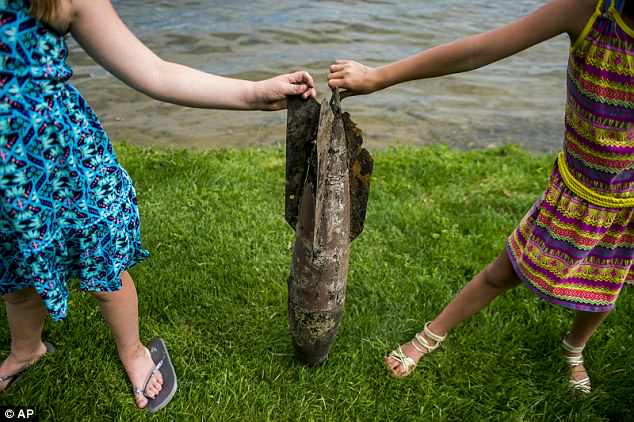 A hole was drilled into the bomb and, after only mud came out, was determined to be no longer active. The bomb squad let the girls take it home

Police told the family that they had actually seen these practice bombs before, usually around Lake Huron.

Fighter pilots would often drop the practice bombs they had left into the lake during the war, according to Argentine Township Police Sgt Douglas Fulton.

The bomb squad was going to take the bomb with them, but the girls’ families asked if they could keep it instead.

Now the girls truly are famous, and with once incredible treasure – and tale – to share.