The £1.6million tree as church’s magnificent marvel is the most valuable specimen in the UK

A magnificent plane in a churchyard has been crowned Britain’s most valuable tree – priced at £1.6million.

The majestic 300-year-old specimen at St Mary Magdalene Church in Islington, north London, is worth seven times more than the average UK house.

The London plane, which has a circumference of 13ft, was valued under a system that puts a ‘price’ on trees in a bid to halt the ‘chainsaw massacre’ of urban areas across the country.

The Daily Mail’s Be A Tree Angel campaign, organised with the Tree Council, is encouraging readers to plant trees to help make a greener Britain – and protect existing trees.

We are giving away trees all week for readers to plant in their gardens and communities.

The £1.6million figure is based on a system known as CAVAT – Capital Asset Valuation of Amenity Trees –used by councils and recognised by the courts to protect trees at risk from being cut down.

The system means cutting a mature tree down could be an expensive problem for any property owner thinking of doing so, as the courts can order them to pay the CAVAT value in full.

After the system was launched in 2008, a Victorian plane in Berkeley Square in London’s Mayfair was valued at £750,000. Since then, many more historic trees nationwide have been officially valued to protect them from developers and councils concerned they may pose a risk to public safety, as well as insurance claims.

Two giant London planes planted in around 1850, side by side next to what is now the bus station in Cheltenham, Gloucestershire, are together worth about £1million.

Thousands of cherry trees will soon blossom across the UK to symbolise the friendship between Britain and Japan.

More than 6,500 will be grown from Cornwall to the Orkneys in a project funded by Japanese firms. Yesterday the Duke of Gloucester and the Japanese ambassador planted the first two trees in London’s Regent’s Park.

The cherry blossom, known as sakura in Japanese, symbolises new life and springtime. 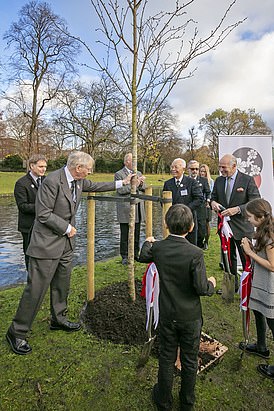 The Duke of Gloucester, who is patron of the Japan Society, said yesterday: ‘What better way to commemorate the friendship between the people of the UK and Japan than the planting of cherry trees.’

Japan’s ambassador Yasumasa Nagamine, said: ‘I hope (these trees) will bring joy to the people of the UK.’

Sara Lom, chief executive of the Tree Council, the Mail’s partner in our Be A Tree Angel tree-planting campaign, said: ‘For me trees are a symbol of hope.

A plane next to St Paul’s Cathedral is worth £585,000, while another, on Cheapside in London, which survived a direct hit by a bomb during the Second World War, is worth £350,000.

The valuations emerged during National Tree Week, the UK’s largest annual tree celebration. Nationally, councils have been chopping down street trees at the rate of about 60 a day, according to figures revealed through freedom of information laws.

Environmental groups say that councils are stripping the nation’s leafy suburbs of their Victorian and Edwardian heritage to save the cost of managing trees. Property developers and big infrastructure projects such as the HS2 railway are also facing criticism for felling mature trees in their way.

When mature trees are replaced, it is with saplings, which are far cheaper to maintain. In London, 49,000 trees were officially recorded as being removed by council officers in the five years to 2017.

The council insisted on removing the entire avenue of 51 trees on Tooting Common’s Chestnut Avenue despite a petition signed by more than 6,500 people and the opposition of London mayor Sadiq Khan, who is a local resident.

The authority claimed that the trees were in poor condition and posed a ‘serious threat’ but an independent tree risk assessor concluded that most of the trees, valued at £2.6million under CAVAT, were perfectly safe.

Similarly, despite massive public protests, Sheffield Council has cut down 5,600 of the city’s 36,000 street trees over the past seven years and plans to remove another 12,000. While Birmingham’s historic Centenary Square’s oldest tree, which is at least 90 years old, was also chopped down in 2017 –one of 9,200 trees felled in the city over seven years.

The CAVAT system was devised by arboriculturist Christopher Neilan after he became concerned about the number of large trees being removed from cities.

A tree’s worth is assessed according to its size, health, life expectancy, historical significance and how many people live nearby to enjoy it – with each category given a monetary value. Mr Neilan said: ‘The aim was to stop big trees being felled without a very good reason.’

You can get involved with Be A Tree Angel in five ways:

2. Donate Nectar points — if you donate 50 points, we’ll match overall donations of up to 10 million points. You can make a larger donation: every 3,000 points will be enough to plant five trees.

3. Claim our free ‘grow your own’ trees — simply by paying postage. There’s a new tree every day until Friday — today’s is a willow (turn to Page 58 for details).

4. Spend Nectar points — on a £5 gift voucher that can be used on a tree of your choice at 900 garden centres.

5. Support schools — your company can get involved with the ‘1,000 orchards for 1,000 schools’ branch of our campaign.

See beatreeangel.co.uk for details. And for a map of planting events near you, see treecouncil.org.uk/ take-part/near-you