A couple who’d given up hope of ever conceiving naturally have spoken of their joy after a £100 fertility kit gave them the ‘miracle’ baby they’d been longing for.

Sarah Capps, 33, and her husband Rob, 36, from Bishop’s Itchington, Warwickshire, had spent almost three years trying, with no success.

The couple were told their best hope of having a child was through IVF after tests eventually revealed Mrs Capps had a blocked fallopian tube.

While they were eligible for treatment on the NHS, Mrs Capps was concerned about the invasiveness of the treatment and the side-effects of fertility drugs, which can include hot flushes, nausea and weight gain.

But in the end, there was no need for IVF.

After Mrs Capps read online about the fertility kit, called The Stork Home Conception Device, she applied to enter a trial of the product.

The couple used the device on the most fertile day of her cycle for three months – and on the third time, to their amazement, she became pregnant.

Their son Edward, affectionately known as Teddy, was born in July this year, weighing 6lb 6oz.

Sarah Capps, 33, and her husband Rob, 36, from Bishop’s Itchington, Warwickshire, gave birth to their son Teddy after using The Stork Home Conception Device

‘We still can’t believe we’ve got him,’ Mrs Capps told MailOnline. ‘It’s crazy to think he’s here because of a device that came out of a box.

‘Rob and I are very grateful that we were eligible for IVF on the NHS, but are also really relieved we didn’t have to go through the emotional rollercoaster that it brings.

‘We would definitely use the device Stork again in the future to help us give Teddy a brother or sister.’

Mrs Capps, an events worker, and her IT worker husband started trying for a baby nearly four years ago, after they’d been married for a year.

‘As the months went by, I was getting more and more upset about the fact I couldn’t conceive – especially as I’d started trying the same time as a good friend and she’d become pregnant within the first month of trying,’ Mrs Capps said.

‘I would get really upset looking at Facebook as it had pictures of people’s children and baby scans. I thought “when will it be our turn?”

‘And every time I got my period it was just another month that we’d failed to get pregnant.

‘I would get upset and ask Rob why he was still with me, given that I couldn’t have a baby. He was very positive and kept saying “it’ll happen”. We are both fit and healthy and don’t smoke, so I tried to stay positive, too.’ 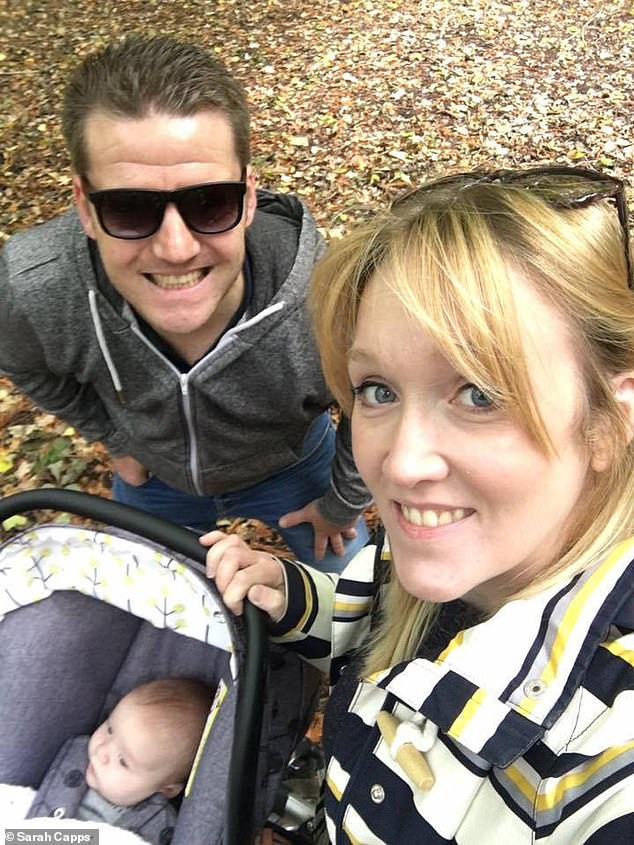 The couple used the device on the most fertile day of her cycle for three months – and on the third time, to their amazement, she became pregnant 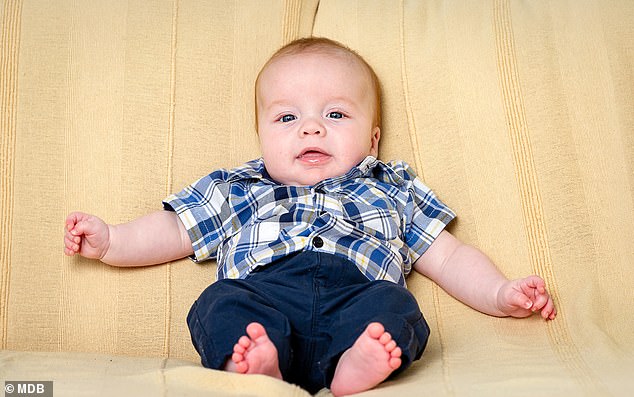 HOW DOES THE STORK WORK?

The stork is a two-part device.

The part on the right is called the Conceptacle. At the start of the process, the couple have sex using a condom (made of silicon) that has a cervical cap at the end of it.

This cap collects the sperm when the man ejaculates.

Afterwards the condom is pulled off as a normal condom would be and the cap is removed.

The woman then uses the applicator device (pictured left) to inset the cap of semen into her vagina and up to the cervix – to give her the higher chance of conception possible.

She puts the cap into the holder at the top.

Plunger button one clips everything into place, so the cap is held firmly in the applicator. Now, the cap can be tilted to 45 degrees without any semen falling out.

The woman then puts the applicator inside her vagina and when she feels a bit of pressure, she has reached the entrance to the cervix.

Pressing button two opens up the device so the cap can be deposited.

Button three releases the cap, leaving a tampon-like string behind so the woman can pull it out later after the 4-6 hour recommended time window. The applicator is removed once button 3 has been pressed.

After six months, Mrs Capps began using a fertility tracker to ascertain the days of the month she was most fertile.

But by July last year, after two-and-a-half years of trying, she insisted the couple go to the doctor.

Tests revealed Mrs Capps’ hormones were functioning as they should and Mr Capps’ sperm quality was fine.

But a further test revealed Mrs Capps’ right fallopian tube appeared to be blocked – which was the most likely reason she was struggling to conceive.

The fallopian tubes play an important role in conception because they are where most eggs are fertilized.

If any part of the fallopian tube is damaged, for example by surgery or an infection, they can become blocked by scar tissue.

Indeed, it was previous surgery Mrs Capps had undergone that doctors suspected was the most likely cause of scar tissue.

Diagnosed in 1999 aged 14, with severe Crohn’s disease – inflammation of the digestive tract – she had previously undergone three operations on her abdomen to remove all of her large bowel, and all but 75cm of her small bowel.

But the news this had most likely caused the blocked fallopian tube was even more devastating.

‘I was really upset because I felt the reason we weren’t getting pregnant was all my fault,’ she said. ‘If I didn’t have Crohn’s, we would have had a baby by now.’ 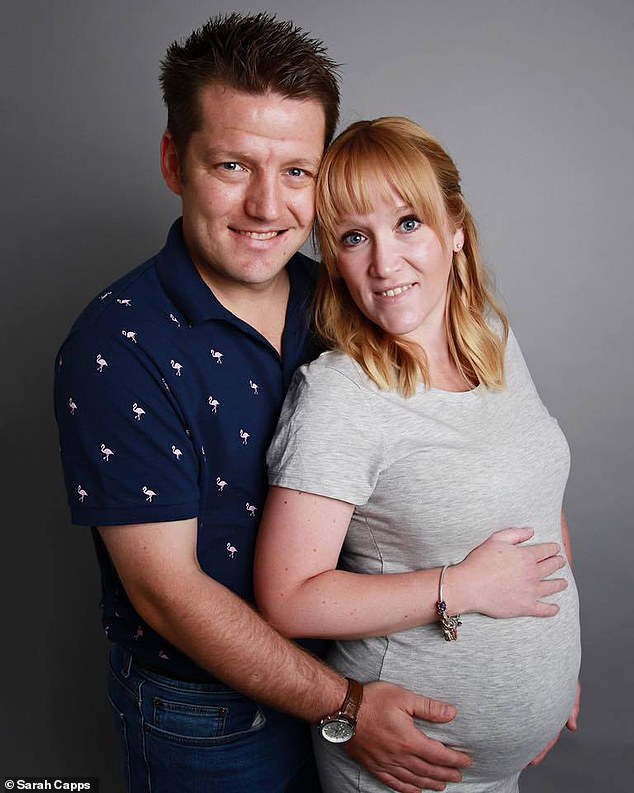 Mrs Capps, an events worker, and her IT worker husband started trying for a baby nearly four years ago, after they’d been married for a year 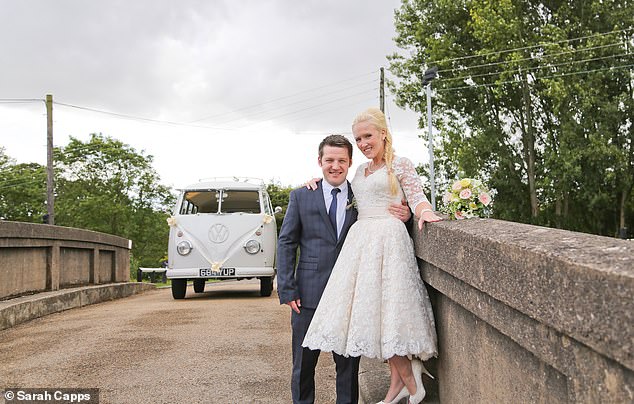 Thankfully, the couple were accepted for IVF on the NHS and attended Coventry Hospital in August last year to have the process explained to them and collect fertility drugs.

‘To be honest, it was all a bit overwhelming – there was so much information to take in,’ said Mrs Capps.

‘In the end, we decided to delay treatment until the New Year as we were going on holiday in the autumn and I was concerned about the drugs making me feel unwell.

‘Then it would be nearly Christmas, so we decided we’d enjoy that and start the IVF in the January.’

But one evening in September, Mrs Capps spotted an online competition to try The Stork device.

‘It was targeting couples who were struggling to conceive, which we obviously were, so I filled in the form and hoped for the best,’ she said.

‘When we got accepted, Rob and I thought “well, what have we got to lose”, and decided to give it a go over the autumn months.’

The couple were sent three devices – one to use on the most fertile day of Mrs Capps’ cycle each month – for three months.

‘When we opened the box, the device did look quite bizarre,’ said Mrs Capps. ‘But the great thing is the Stork basically gives the sperm a ‘leg up’ to get it into the right place.

‘It was a bit fiddly to use the first time, but we got the hang of it.’

For the first two months, nothing happened. But after using the device for a third time – ‘by which time we were totally clear on how to use it’ – there was good news. 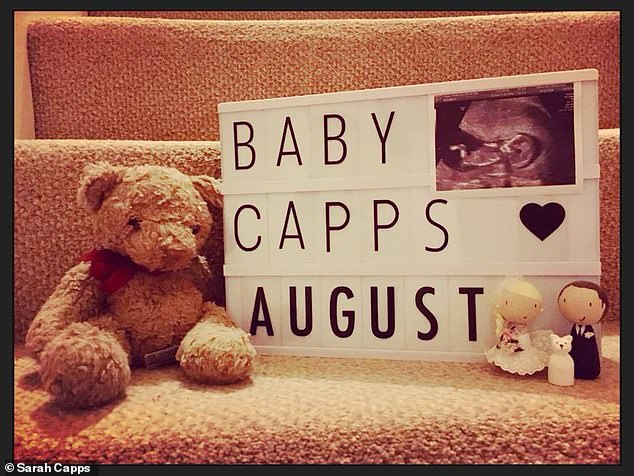 Mrs Capps said: ‘At the end of the day, The Stork worked for us, and I believe it’s worth other couples giving it a go’

‘Every other time, I’d done the test with Rob there, but this time I hadn’t expected it to be positive and just did it on my own.

‘It must have been the 30th pregnancy test I’d done over the years and I was so stunned, I didn’t really know what to do.’

Mrs Capps enjoyed a smooth pregnancy with no morning sickness and baby Teddy was born by planned Caesarean section on July 24th this year.

‘Teddy will never understand just how much he was wanted,’ she said.

‘At the end of the day, The Stork worked for us, and I believe it’s worth other couples giving it a go.

‘It’s not going to add to the romance – you do really need to have a sense of humour when using it – but it’s something you can use in the privacy of your own home, rather than having to go to an IVF clinic.

‘Also, while £100 a go isn’t cheap, it’s a lot cheaper than paying for fertility treatment.’

She added: ‘The medical staff we told at the hospital about the device said it was a clever idea, as it gives the sperm a helping hand to get to the right place.’

WHAT IS THE STORK? 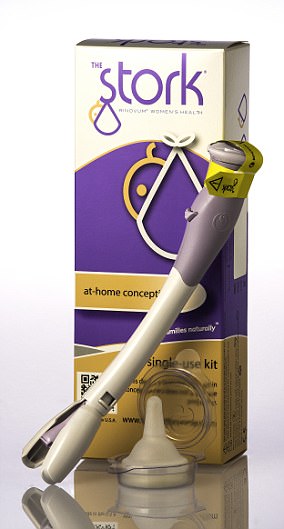 The Stork helps women get sperm as near as possible to their cervix after sex – and could spare many couples the financial and emotional misery of IVF.

Data presented at The Fertility Show 2017 showed that at least 300 babies had been born as a result of couples using The Stork since it was first launched three years ago, in the UK. But the real figures are almost certainly much higher.

‘The published data is based solely on couples who contacted the manufacturer,’ says Dr Catherine Hood, a London-based consultant in psychosexual medicine.

‘Given that infertility is such a sensitive subject, and the number of kits which have now been sold, I am sure there are many more success stories.’

Available in pharmacies or online, The Stork uses a technique called cervical cap insemination (ICI) – a well-documented and clinically proven method of fertility treatment with a success rate of up to 20 per cent.

The Stork streamlines and simplifies cervical cap insemination by combining a condom-like sheath with a cervical cap to create what is known as a conceptacle.

Couples using the technology are advised to have intercourse around their most fertile days and afterwards the condom-like sheath is simply rolled down and off the cervical cap.

The semen-filled cap is then placed in an applicator, similar to those used insert a tampon, to position the cap on the cervix.

The cervical cap is left in place for 4 to 6 hours, to enable sperm to swim upwards to fertilize the woman’s egg.

During this time, she is free to go about her day-to-day activities and after the 4 to 6 hours has elapsed, the cap can be removed via a string-pull, like a tampon is.

A peer-reviewed clinical trial, published in the journal Surgical Technology International, showed a higher average concentration of sperm at the cervix using The Stork when compared to natural intercourse sperm scores.

In one clinical trial that analysed post-coital samples of cervical mucus, it was shown that The Stork increased scores for sperm concentration and quality by 3.23 per cent in 85 per cent of women.