The 27 cars new on sale with terrible all-round visibility

A combination of safety requirements and styling have resulted in the windows of cars shrinking and the door pillars becoming chunkier – a recipe that doesn’t bode well for driving visibility.

And there are some models on sale in showrooms today that are far worse than others, according to test by Which?.

More than two dozen models currently available to buy in dealerships – including the popular Nissan Micra and Renault Megane – offer poor all-round view, which could be hazardous for drivers and other road users, and push buyers towards more expensive models that have parking sensors and reversing cameras fitted.

Can you see clearly? Which? says there are 27 cars new on sale with terrible rearward visibility due thick pillars, letterbox-style windows and overall poor vehicle design

The consumer group uses hi-tech camera equipment to measure the visibility of more than 100 new cars every years. It then uses to result to give a visibility rating based on a five-star scale.

Of all the models it has tested that are currently on sale, there are 27 that have been awarded just two stars by the expert test team in the consumer champion’s lab.

This includes a number of mainstream models from popular brands, including Ford, Mercedes-Benz and Nissan that have been deemed to only offer a limited view of the road.

These provide some of the structural integrity at the front and rear of the vehicle and, along with crumple zones and active safety features, are designed to form a protective cell around the car’s occupants in a road shunt.

But while safety is paramount, Which? says car manufacturers need to ‘strike the right balance’ between this and being able to see out of the vehicle in all directions as clearly as possible to prevent accidents from occurring in the first place. 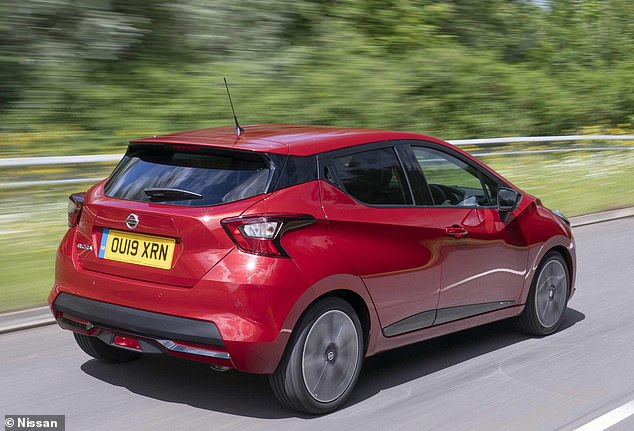 Which? says the black painted rear quarter pillars on the Micra mask how wide they are, but from inside they make visibility very limited out the back

For instance, Which? researchers described the popular Nissan Micra (£13,647) as having such thick rear pillars that it provided an ‘almost visor-like rear view of the road’.

To help drivers out, Nissan has made parking aids available for the small supermini, including a rear view camera and rear parking sensors.

However, these are only available on the higher-spec models that come at a premium, which salesmen will try to up-sell to customers.

Another example is the Renault Megane, a popular family hatchback priced from £16,734. 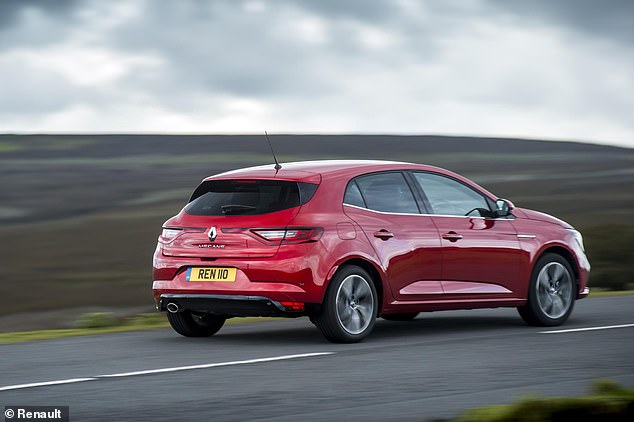 Which? describes the latest Renault Megane as having a ‘letterbox-like rear window’ 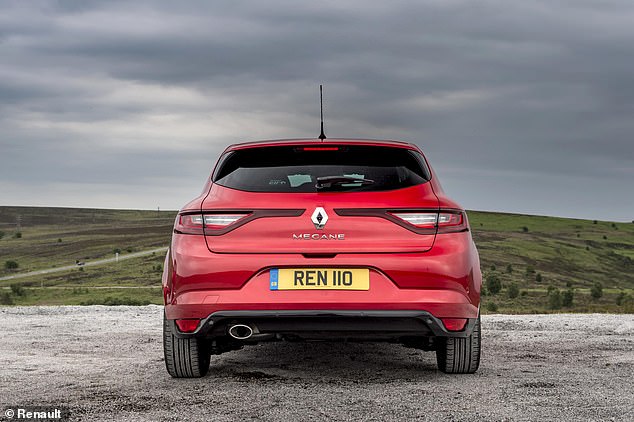 Only high-end models get a rear view camera, which dealers may try to up-sell to buyers

Which? described it as having a ‘letterbox-like rear window’, which is not only small but also partly obscured by the high rear-seat headrests.

Rear parking sensors come as standard on all but the entry-level Megane, and a rear-camera is also available on higher-end versions.

While Which? says this technology is a helpful aid, it says it isn’t a substitute for good all-round visibility.

But the entirety of the problem doesn’t simply lie with manufacturers trying to adhere to the most recent crash safety standards,

Coupé-style cars with swooping rooflines that taper towards the rear of the car are becoming increasingly popular, even among huge crossovers and SUVs.

For instance, the Mercedes-Benz GLC Coupé – priced from just over £40,000 – has a sloped coupé-like roofline that leaves space for windows at a premium in the rear of the car, with the result being a compromised view. 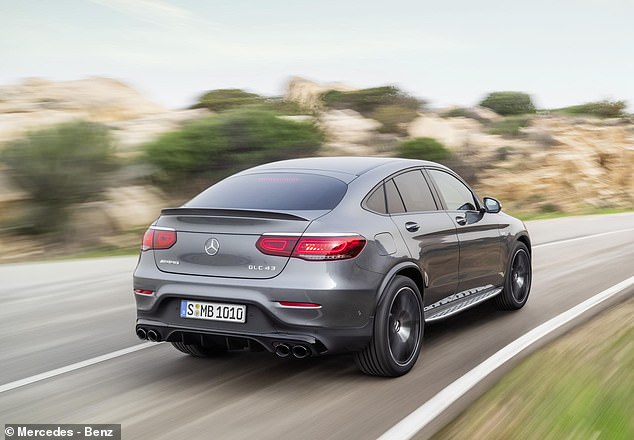 Which? cameras highlight areas where visibility is being obstructed by pillars, headrests, rear window wiper mechanisms and other objects. The more colour there is, the worse the visibility – as seen here for the Mercedes GLC Coupe

This image taken from inside a Fiat 500X SUV shows what good visibility looks like, despite the rear window still being quite small an pillars very chunky

While the GLC Coupé includes a reversing camera and Active Park Assist (which identifies a suitable parking space) as standard, Which? says these parking aids ‘should be an assist, not a lifeline’ and adds ‘they could fail and leave the driver relying on a limited view of the road’.

How Which? tests visibility inside cars

All models that come through Which?’s lab have their visibility assessed scientifically, not subjectively.

Every car here had its visibility measured using a camera that is placed at head height in the driver’s seat and rotated 360-degrees.

Testers then measure how much the driver’s all-round field of vision is impeded by obstacles such as window pillars and headrests.

Driver-assist technologies like parking cameras are taken into account, alongside factors such as how well obstacles can be seen in mirrors and the quality of headlights, but the visibility rating is influenced most by the 360 visibility measurement.

A good parking aid is very useful, but it shouldn’t be a substitute for giving the driver a direct view of the road.

Which?’s professional lab tests revealed that there are far more cars with good all-round visibility than bad – 243 new and used cars available to buy have been awarded four-out-of-five-star visibility for the driver.

Even cars aimed at the budget end of the market suffer these same visibility woes.

The Dacia Duster is the cheapest SUV available to buy new at just under £11,000 but has thick pillars at the rear that risk obscuring hazards behind the car from the driver.

‘Reversing around a corner in the current Dacia Duster, which anybody taking their driving test before December 2017 may have been tested on, would be particularly tricky,’ says Which?’s team of researchers.

Like other models listed, it has rear parking sensors and a rear-view camera on more expensive high-spec models, but the consumer group again reiterated that it these are not a fit substitute for good direct visibility – and it could be a means of dealers to encourage customers to spend extra to have these features.

Lisa Barber, Which? Magazine Editor, said: ‘Many of these cars will come with driver-assisted technologies as optional extras, such as parking cameras.

‘These are good to have but they should not be a substitute for giving the driver a good direct view of the road.

‘Good visibility alone does not make a great car. A car needs to pass our independent tests with flying colours to be awarded a Which? Best Buy. We’ve found cars with four-star visibility that are so disappointing in other areas that we’ve given them Don’t Buy status.’

Even the smallest of vehicles are riddled with poor visibility, according to the table of 27 vehicles, 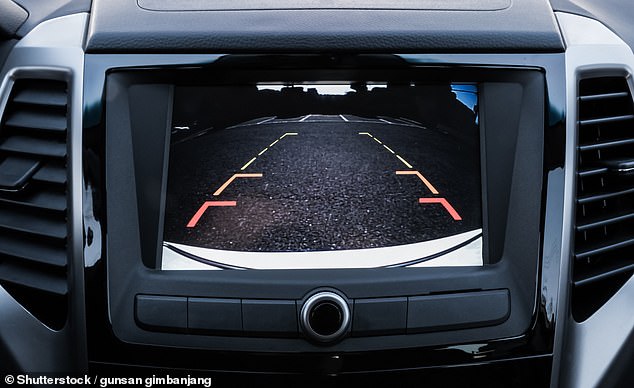 While Which? says technology like parking sensors and cameras like this are a helpful aid, it says it isn’t a substitute for good all-round visibility 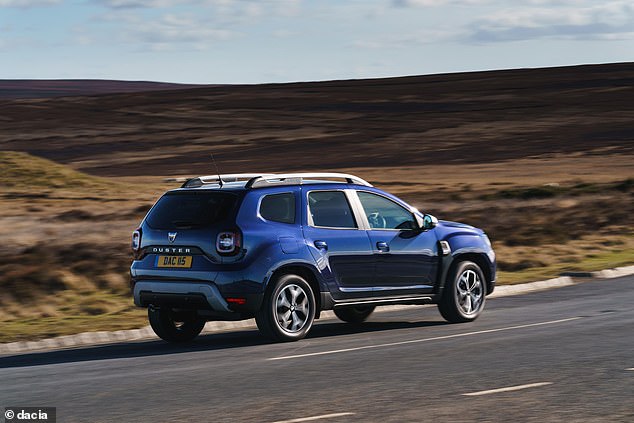 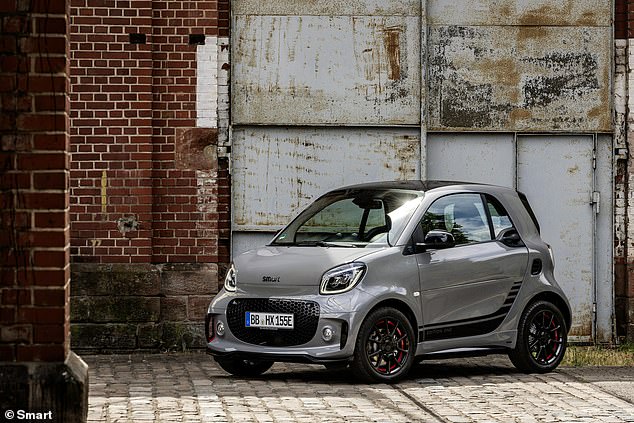 The Smart EQ ForTwo is a compact electric car designed to be used in the city, but even despite its dinky dimensions it has poor-quality visibility, according to Which?’s measurement

When Which? researchers measured the Smart EQ ForTwo – a dinky electric car designed for the city – it performed dismally in visibility tests.

Arguably, the need for good all-round visibility is greatest in the city, where there may be more cyclists and pedestrians – but even the £19,000 Smart that’s aimed for this type of environment limits how much of these road users a driver will be able to see while at the controls.

While its tiny size and maneuverability make it ideal for navigating obstacles and narrow city streets, the compromised rear window means drivers will need to take extra care when surrounded by pedestrians and those on bicycles, Which? warned.