The £400 headphones that can help you hear in a restaurant

There are some things you don’t need to be told twice. Unless, that is, you haven’t heard properly the first time. Is there anybody alive shocked by the news that the noise in restaurants is out of control?

The charity Action on Hearing Loss carried out an experiment where they sent an undercover diner to nearly a dozen chain restaurants to measure the level of background noise.

The results were astounding: at Wagamama and Patisserie Valerie, the worst offenders, sound meters recorded readings of more than 90 decibels — the equivalent of eating your dinner next to a screeching motorcycle.

The results at Pizza Express, Prezzo, Bella Italia and pretty much every other national chain were not much better.

The thing is, I don’t want to share my pizza with a Hell’s Angel. And even if I did, I’d insist he turn off his Harley-Davidson before the dough balls arrive.

I’m 48 and I’ve had trouble hearing conversations in restaurants for the past decade or so. So, a few years back, I went to see an ear, nose and throat consultant to see what was wrong.

‘There’s nothing wrong,’ he told me. ‘You’re just unlucky. Your hearing is in the average range — but it’s right at the bottom of “average”.’ 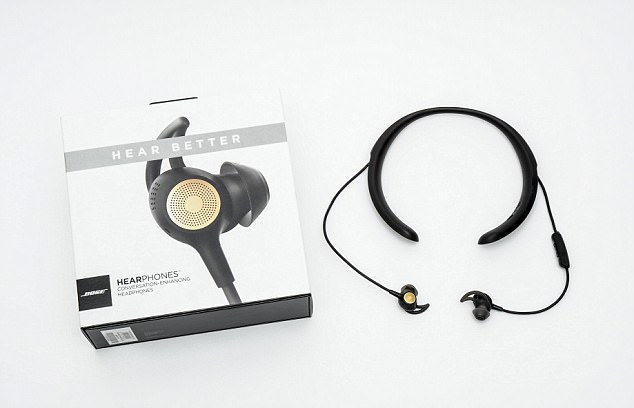 In other words, I’m not deaf. My hearing is just a little bit rubbish.

And seeing how it qualifies as ‘average’, there must be many millions of people just like me.

We don’t need hearing aids — but we certainly do need our friends and families to keep repeating what they’re saying every time we go out to a restaurant.

When I think back to the restaurants of my childhood, they were, in large part, formal affairs. There were thick carpets, pink, silky napkins and plush curtains. All these soft surfaces absorbed the sound of neighbouring conversations, so we could concentrate on what was being said at our table.

And the kitchen, with all its clanking saucepans and shouty chefs, was out of sight from us, in a separate room. 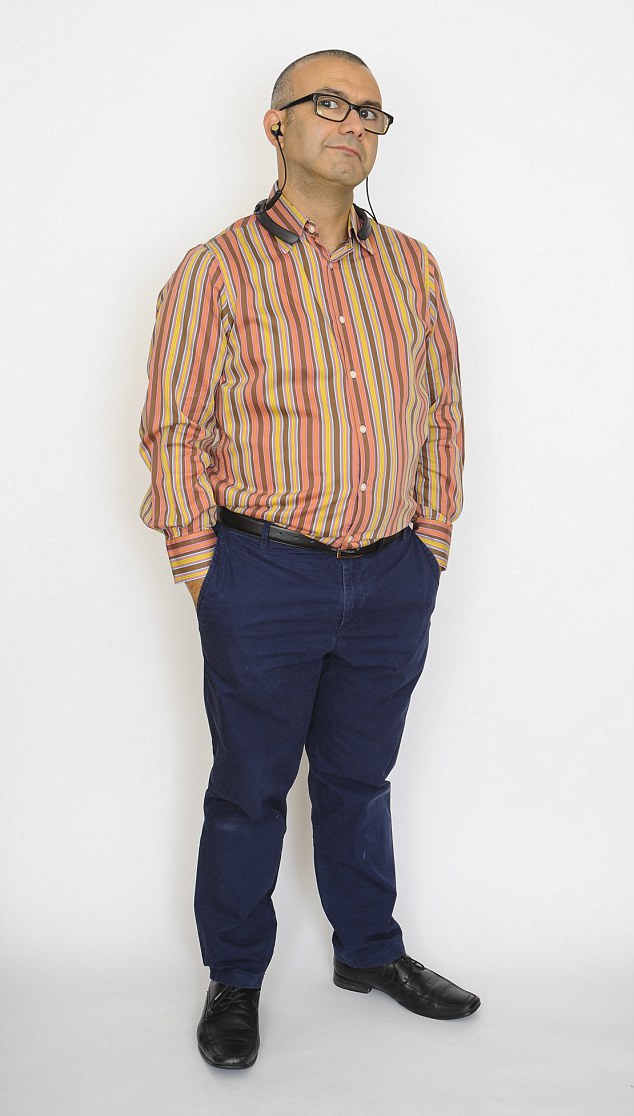 Vincent says: ‘The problem is that the Hearphones are so conspicuous. The earphones are big and bulky. They don’t disappear into your ear like a hearing aid would. And that weird C-shaped thing round my neck? I feel like Larry Grayson’

But then came the age of Ikea. Suddenly there was no carpet, no tablecloth, no curtains. Just bare concrete and open-plan kitchens right next to your table.

These rooms might look modern and slick. But acoustically they could scarcely be more unhelpful — the sound ricochets from surface to surface like a dizzy three-year-old on a bouncy castle.

Which is why I was so excited by the prospect of a new headphone devised for people such as me — a device that helps block out background noise.

Human voices are among the first sounds we find difficult when hearing fades.

Our hearing relies on sound waves entering the ear and causing the eardrum to vibrate. Those vibrations are passed to the inner ear, where the hair cells move in response, and send a signal through the auditory nerve to the brain.

These hair cells can be damaged by injury or noise exposure, but it also occurs naturally with age: around 40 per cent of people over 50 will have some kind of hearing loss, rising to 70 per cent of 70-year-olds.

These help make words distinct, so losing the ability to detect these can make it sound as though everyone is mumbling — consonants register in the high range, around 3 to 5 khz.

There is also the phenomenon of so-called ‘hidden hearing loss’, recently coined by researchers at University College London.

People with this type of hearing loss may hear perfectly against a backdrop of silence, but find it impossible to distinguish sounds when there is background noise.

That’s where the Bose Hearphones come in, described by the company as ‘conversation-enhancing headphones that are specially designed to help you hear in louder environments’. They look similar to those noise-cancelling headphones you see in the ears of business people on aeroplanes — and they share some technology.

The main difference is that the earpieces — about the size of acorns — are attached to a strange C-shaped piece of rubber that you wear round your neck. (This C-shaped collar-piece is where the battery and the sound-processing equipment lives.)

The idea is simple. You wear the headphones and use a special app on your mobile phone (connected to the Hearphones via Bluetooth) to adjust the sound.

Using the app, with a few simple swipes, you can fade down the ambient noise (that you don’t want) and bring up the volume of the conversation.

You can also control the sound levels using buttons on the C-shaped collar-piece instead, however these are very fiddly. How does it work? Well, the earphones aren’t just speakers. They have microphones in them, too.

That way, they can sample the different sounds around you — and cleverly cancel out the noises you don’t want to hear.

Bose is very keen to point out that the Hearphones are a ‘personal sound amplifying device’ or a ‘hearable’, rather than a ‘hearing aid’. There are practical reasons for this — a hearing aid is tailor-made for the person wearing it and aimed at people who have been diagnosed with hearing loss, while ‘hearables’ are off-the-shelf products for the public.

But there are also legal implications. If you call something a hearing aid, you have to jump through all sorts of medical hoops before it’s allowed to go on sale.

Why is it priced in dollars? Ah, yes. The Hearphones are currently only on sale in the United States — and the company won’t let you order online if you have a non-American address.

Luckily, I have a friend who lives in New Jersey who bought a pair for me and brought them over on a business trip.

I wear them for the first time to a cheap and cheerful Korean restaurant in London’s Soho.

This place is always full of young people — talking at the top of their voices for the very good reason that their friends won’t hear them if they do not. Obviously there’s not a scrap of soft furnishing anywhere in sight.

The food is fabulous, but the noise is deafening.

The Hearphones change all that. It’s astonishing. With a quick swipe on my phone, the thunderous background noise is reduced to a murmur.

And my friend’s voice comes to the fore. I don’t miss a word. The same is true at a party later in the week. And at a noisy family gathering a few days later.

For the first time in several years, I am no longer constantly asking: ‘Can you say that again, please?’ It really is a pleasure.

Except that there is one major flaw — and, as far as I’m concerned, it’s a fatal one.

Why do I want to improve my hearing at social events? So that I can be more relaxed, more involved, more comfortable in my own skin.

The problem is that the Hearphones are so conspicuous. The earphones are big and bulky. They don’t disappear into your ear like a hearing aid would. And that weird C-shaped thing round my neck? I feel like Larry Grayson.

What’s more, when you meet someone wearing large earphones you automatically assume they are listening to music — and ignoring you. You do not realise that, in fact, they’re going out of their way to make sure they can pay attention to what you’re saying.

I suppose among close family, the Hearphones might be fine. They’ll soon get used to seeing you with these things on your head. But most social events are not like that. People move out of your way, assuming you’re listening to your iPod — ironic, as hearing loss itself can be isolating.

I am afraid that in several weeks of wearing them, I never felt comfortable out in public.

Which is such a shame. My only hope is that restaurants get back their tablecloths, cushions and pink napkins.

Until then, will somebody remove that damned motorbike from the neighbouring table?