Men can now use their smartphone camera to compare how fertile they are against others from around the world.

The YO Home Sperm Test has been linked to World Health Organization data to test how fertile men are in comparison to global statistics.

Run with a mobile app and a clip-on microscope which costs £46.95 ($60), men simply have to deposit a sperm sample in a pot then test it at home.

The test examines the concentration of sperm in semen and their motility and ranks it on a scale of 10-90, based on the counts of fathers in a WHO study.

The test works by men putting a sperm sample on a slide which is inserted into a microscope attached to their smartphone – the phone’s video camera then counts and assesses the motility of sperm in the sample, giving a score based on World Health Organization data

YO does not produce a league table – but does offer men the ability to track their own changes over time.

YO, developed by Los Angeles-based technology company Medical Electronic Systems, claims it will save men the embarrassment of going to a doctor.

The technology was believed to be the first of its kind to be approved by the US’s Food and Drug Administration when it gained clearance three years ago.

YO claims its tests are more than 97 per cent accurate at counting sperm, with people rating 40-60 in the ‘moderate’ range and 60+ with a high sperm count.

The company says a score of 10-30 is the ‘low end of normal’ but the scale starts at six million sperm per ml of semen, less than half the NHS’s low sperm count limit.

In a recent update for the testing kit, the man receives a numerical score based on data from a World Health Organization study of fathers’ sperm counts.

The developers say issues with the man are to blame in around 40 per cent of infertile couples, and say it’s easier to test sperm than ovaries.

‘It’s much more invasive to test the woman and it’s very easy to test the man and our app gives them an assessment,’ developer Eric Carver told the Wall Street Journal.

The test works by men producing a sperm sample – without mixing with lubrication or a partner’s bodily fluids – which is then mixed with a liquefying powder before being put on a sample strip. 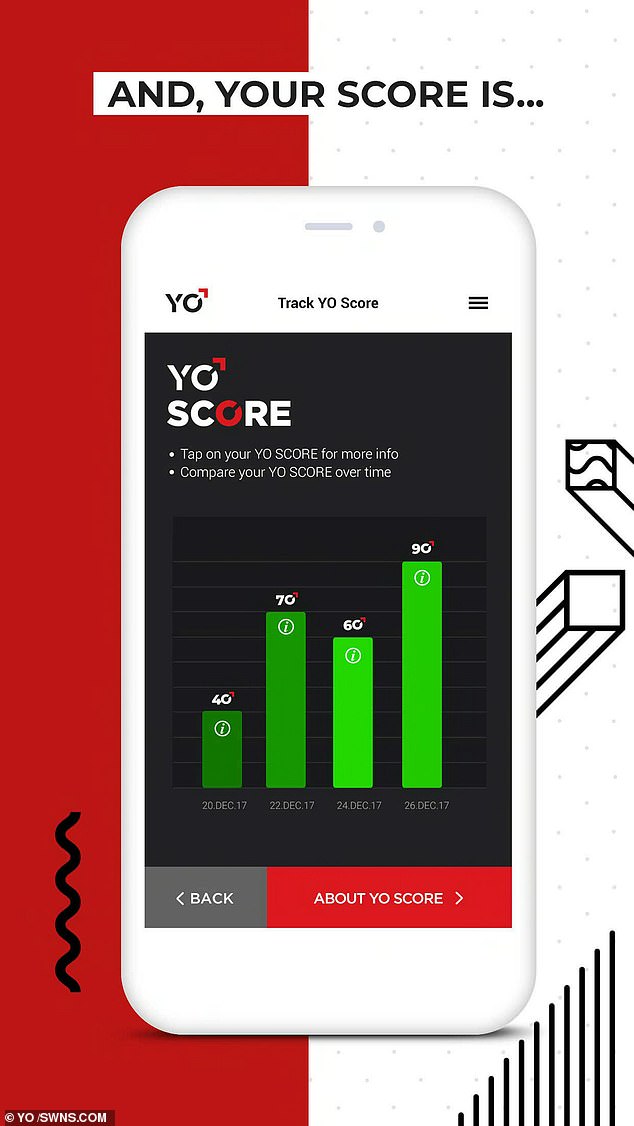 Men receive a score of between 10 and 90 – average is between 40 to 60, while below 40 is a lower level of fertility and 60 and above is high. The numbers are produced by the company’s algorithm which is based on a study of men around the world who have fathered children

The strip is then inserted into a microscope which clips onto the smartphone camera, which takes a video of the sample and analyses it within minutes.

It counts how many sperm there are per millilitre of semen and how motile – active and able to swim – they are, which correspond’s to the man’s fertility.

HOW THE YO HOME SPERM TEST APP WORKS

Following a download of the app, users purchase a starter kit that comes with a collection cups, liquefying powder to mix with the sample, testing slides, a plastic pipette and a YO clip.

The clip attaches to your Android or iPhone to take a video of your sample.

To begin testing, users collect their sample in the cup.

Then, one vial of liquefying powder is added and the sample is gently mixed for between 10 to 15 seconds.

Next, users set aside the sample, which will turn slightly pink, for about 10 minutes.

Once the sample is ready, users mix it again and draw some of it into the pipette.

Then, on the testing slide, some of the liquid is placed on a red dot, which will slowly fill the base of the slide.

The filled slide is finally placed into the YO Clip all the way and then users tap ‘start testing’.

In about 30 seconds, the app take a video of the sample and then spends a couple of minutes analyzing before the video appears on the screen along with a sperm count and motility.

Scientific studies have found men around the world are suffering from falling sperm counts because of modern lifestyles.

In a study published in October last year, researchers in the US and Spain analysed semen samples from two major fertility centers between 2002 and 2017.

Over the period an increasing number diagnosed with oligospermia – male infertility caused by a low sperm count.

And more and more men have a sperm count so low they are likely to need IVF to conceive, while the number of men with a ‘normal’ sperm count dropped.

Lead researcher Dr Ashley Tiegs told DailyMail.com the drop could be driven by factors like smoking, stress, obesity, and exposures to chemicals in plastics.

The study came after experts in Israel and the US found sperm counts among men living in Western countries had fallen by 59.3 percent in the last 40 years.

‘[Our study] supports a lot of the other literature that shows environmental factors like plastics and smoking and obesity are big ones,’ Dr Tiegs said.

‘We know obesity is on the rise and it does affect sperm quality. It increases the risk of morbidity and mortality, but it can also affect offspring too.’

YO’s creators say their test will help people spot signs of infertility – believed to affect one in seven couples – early on and improve their chances of conceiving.

The firm’s CEO Marcia Deutsche said in 2017: ‘We developed the YO Home Sperm Test to give men a simple, affordable and accurate way to test their fertility at home, in private.

‘Couples are realizing that coping with infertility is a shared journey.

‘So now while monitoring and testing the woman, there is also an easy way to test her male partner using the YO Home Sperm Test.’