Used car prices have sky-rocketed since the pandemic struck, but we doubt many people would have predicted a Ford Focus selling for almost £100,000.

Yet that was the reality at a UK auction over the weekend, with a souped-up version of the popular family hatchback going for a staggering £99,000.

The car in question is a rare, limited-edition, one-owner RS500 from 2010 with incredibly low mileage – and it obliterated the previous record-high figure paid at auction for a Ford Focus road car.

Four other examples also attracted huge winning bids in the region of £56,000 to £75,000, with collectors going into a frenzy for fast Ford Focus motors on Saturday.

The world’s most expensive Focus: This 2010 RS500 (left) was bought this weekend at a UK car auction for a massive £99k. And it wasn’t the only example to change hands for staggering fees as collectors went into a frenzy for the modern-era Fast Fords on offer at the NEC Classic Motor Show on Saturday and Sunday…

A total of seven Focus hot hatches from the early 2000s to 2010 went under the hammer during Silverstone Auctions’ NEC Classic Motor Show in Birmingham on Saturday and Sunday.

While two failed to reach their reserves and remain available after the event, five went for eye-popping sums, selling for higher figures than a raft of exotic classics and collectible supercars also available at the same auction. 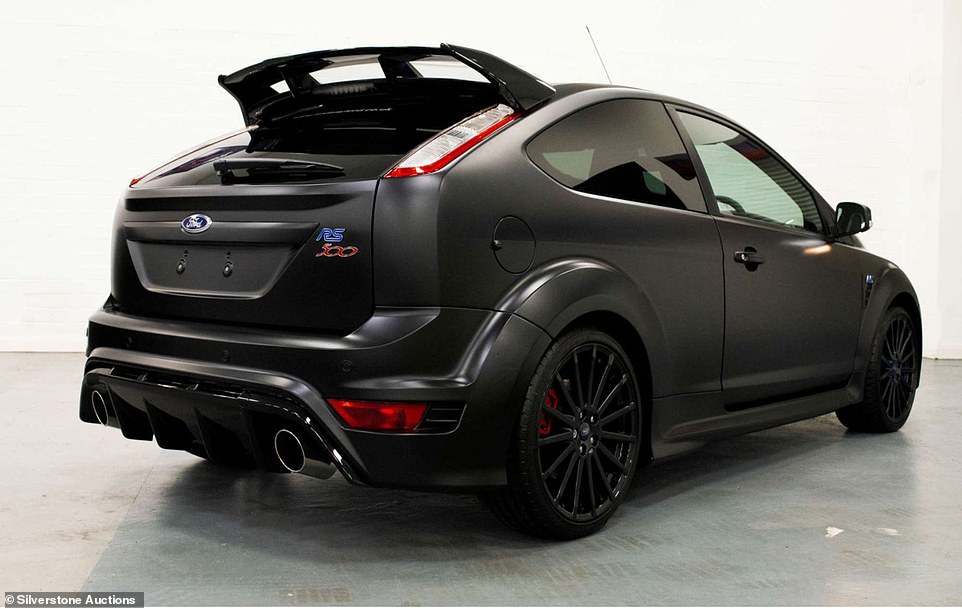 The £99,000 Ford Focus: This is one of just 500 examples of the limited edition RS500 models, which were produced at the end of the second-generation Focus RS run. Silverstone Auctions’ sold it for a new world record price on Saturday

The car now holding the crown as the most expensive Ford Focus of all time is this 2010 RS500 with just 948 miles on the clock.

It was described ahead of the auction as being in ‘out of the box’ condition, with its driver’s seat barely worn-in during its lifetime.

Silverstone Auctions’ had set a jaw-dropping guide price in the region of £90,000 and £110,000. Frantic bidding on Saturday afternoon concluded with the hammer dropping at a scarcely-believable £99,000.

With the limited edition motor initially costing just £35,750 back in 2010, it means Saturday’s winning bidder paid almost three times its original price to get their hands on it.

While this is a remarkable amount to pay for a performance version of a family car that’s sold in millions since the late 1990s, this example is very rare indeed.

Just 500 were built for all markets as a swansong for the supremely-popular second-generation Focus RS, with each of the RS500s produced individually numbered. 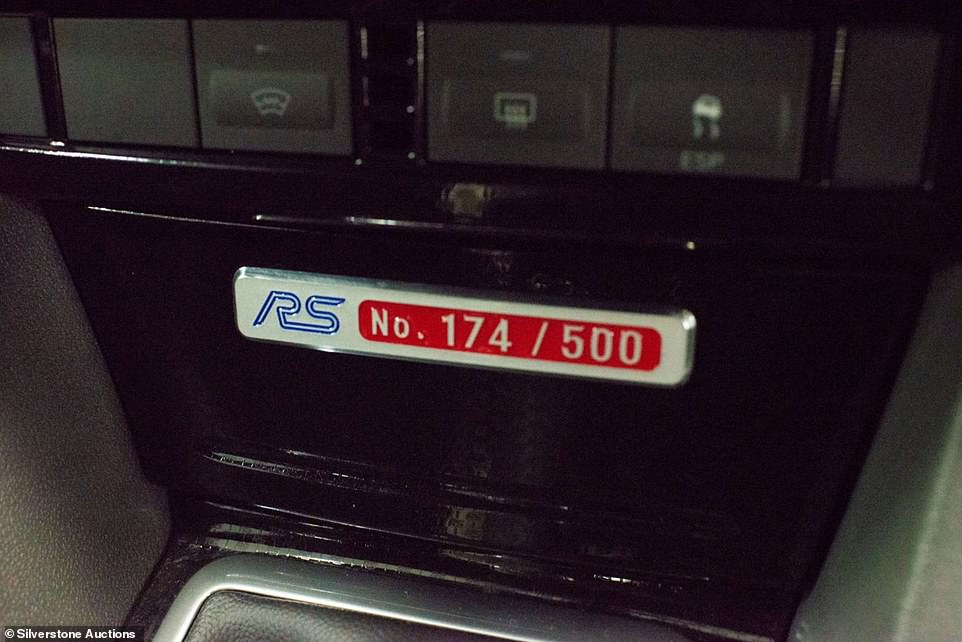 Each RS500 was individually numbered. This was for car number ‘174’, which Silverstone Auctions says it is ‘one of, if not the best RS500 out there’ with exceptionally low mileage 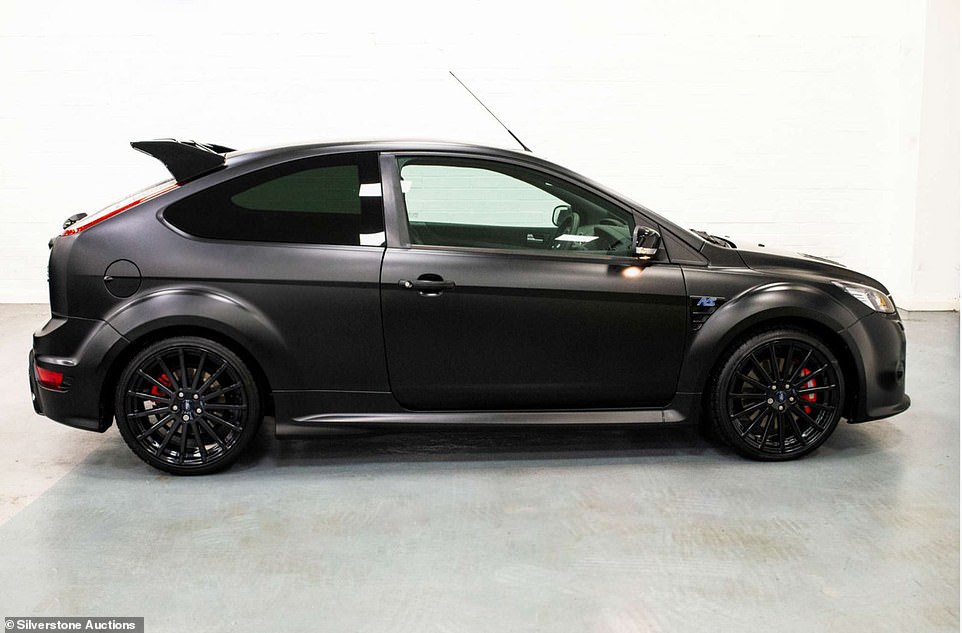 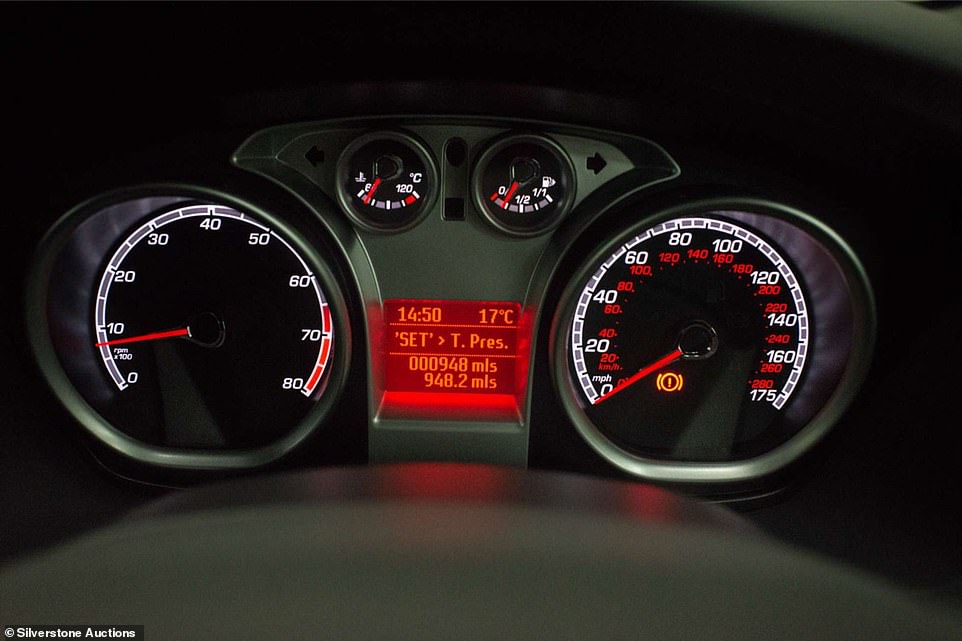 This explains why it has fewer than 1,000 miles on the odometer and remains in this incredible, totally-original, condition

Ahead of the sale, Silverstone Auctions described it as ‘one of, if not the best RS500 out there’ – which was certainly reflected by the incredible sale price.

Every RS500 made was finished in this stealthy matt-black paint with matching wheels and featured an uprated version of the 2.5-litre, five-cylinder engine that graced all Mk2 Focus RS models.

It generated 345bhp, which was 15 per cent more power than the standard hot hatch offered at the time.

This car was first registered on 6 August 2010 and had just one owner from new had stored it as in an ‘exceptional modern classic Fast Ford collection’ – hence it clocking fewer than 1,000 miles in 12 years.

It obliterated the previous record price paid for a Ford Focus.

It means that the seller of the record-high Focus RS500 pocketed a profit of over £63,000 in a little over a decade, with the winning bid some 177 per cent higher than the price they paid when purchasing new. 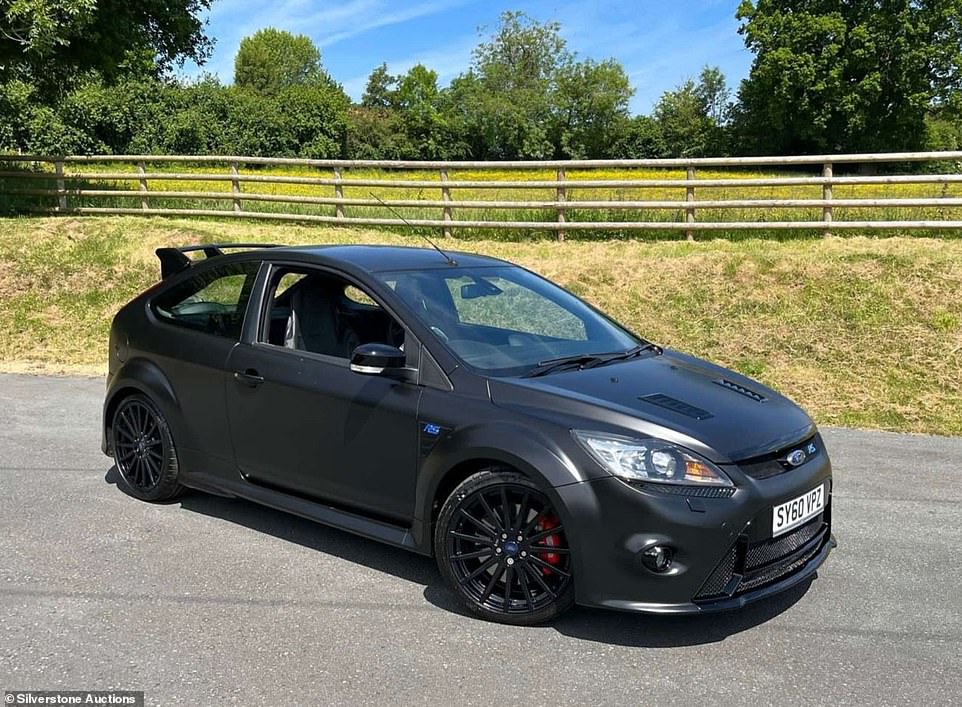 There was more than one limited-edition Focus Mk2 RS500 available at this weekend’s Silverstone Auctions sale, with this 6,857-mile example also selling for £62,250. That’s the third highest ever price paid for one of these cars

A second example of the limited run MK2 RS500 with 6,857 miles was also up for grabs at the NEC show sale and went for a bank-busting amount.

Chassis number ‘160’ out of 500 – another of the limited supply of UK-spec cars available from 2010 – generated plenty of interest, with bidding finally reaching £65,250.

This was a fraction above its lower estimate of £65,000 to £75,000 and means it cost its new owner twice what it was in showrooms when new 12 years earlier.

John Mayhead, a classic car expert from Hagerty UK, says performance versions of the Ford Focus (both ST and RS models) have gradually been creeping up in value over the last couple of years, with the RS500 leading the pack of road cars.

However, John says the Silverstone Auctions event itself created a set of ‘very specific circumstances’ that would have attracted the biggest collectors of these cars.

‘There were eight extremely low mileage Focus RS/ST offered in the same sale, along with a host of other classic Fords and modern classic performance hatchbacks. That meant that the sale attracted a huge number of the ‘right’ buyers in one place at one time,’ he explains.

‘So, are Focus values soaring? Maybe. Although they are definitely rising,

‘Hagerty is always wary of the values achieved by ultra-low mileage cars of any model, as they are not indicative of the ‘normal’ market where cars are driven.

‘These are collector’s pieces: if they are regularly taken on the road, they just become another car and their unique selling point is lost.’

First-generation Focus RS with 21 MILES on the clock sells for £75,000 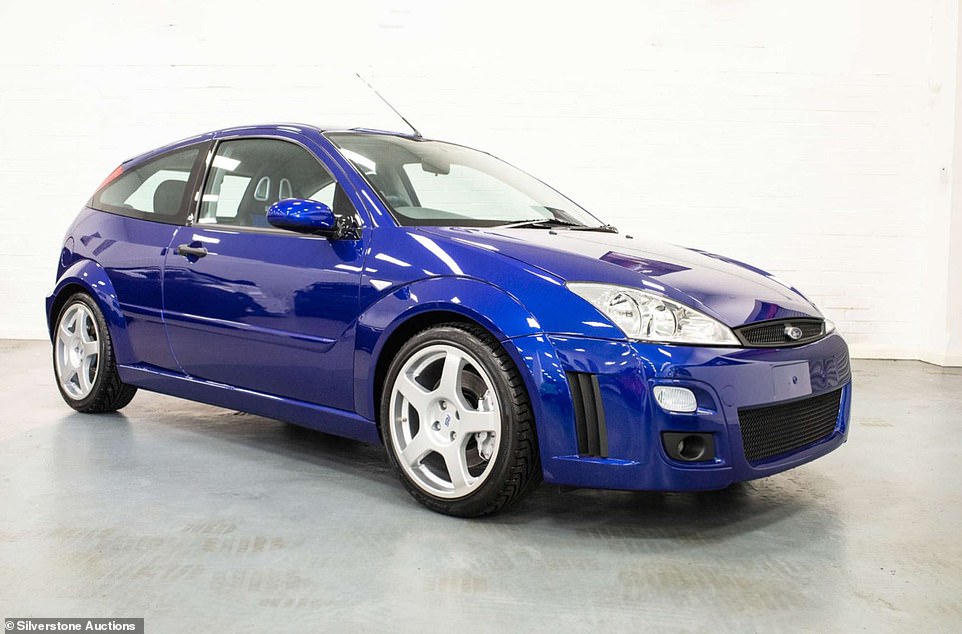 Time-warp hot hatch: This pristine example of the first-generation Focus RS is believed to be the lowest-mileage one in existence and sold for almost £75,000

If you thought the world-record RS500’s mileage was low at 948 miles, this Mk1 Focus RS has barely turned a wheel in its two-decade lifetime.

The souped-up version of the first-generation Focus, which hit the UK market in 1998 and went straight to the top of UK sales charts, is among the most sought-after hot hatches build around the turn of the century – and this one is exquisite.

This 2003 car is believed to be the least used example in the world, having covered just 21 miles in the hands of its only owner ahead of the Silverstone Auctions event.

It sold for a monumental figure of £74,833 at the weekend. While this an incredible amount to splash on a Ford Focus, it was less than the pre-sale estimate of £85k to £95k – and not the record amount for a Mk1 RS, which currently stands at £77,000. 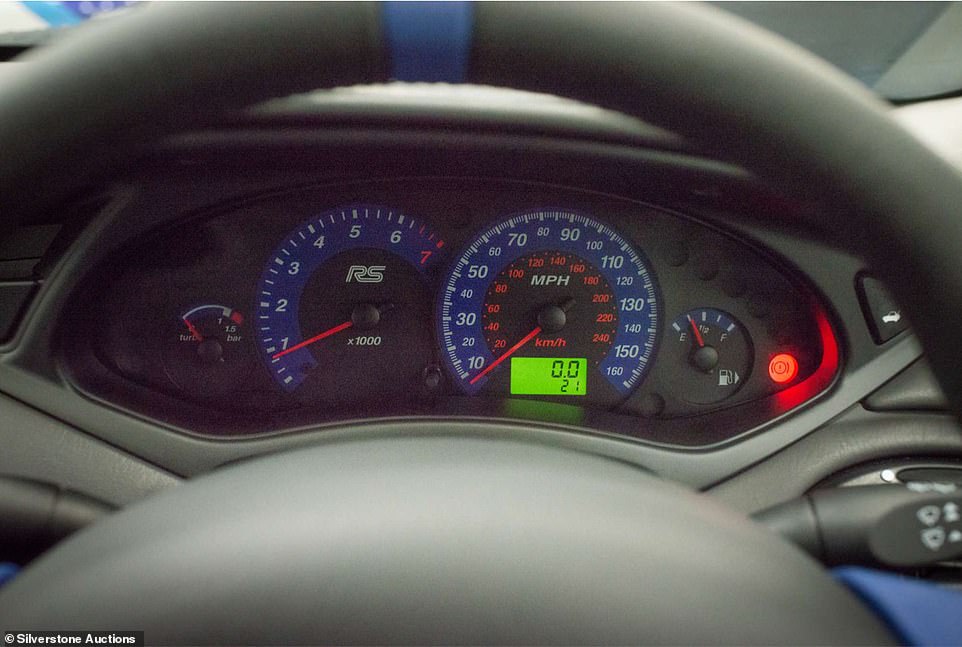 The one-and-only keeper took delivery of the car in November 2003 and instantly put it into controlled-temperature storage. That’s why it has covered a mere 21 miles in the last 19 years 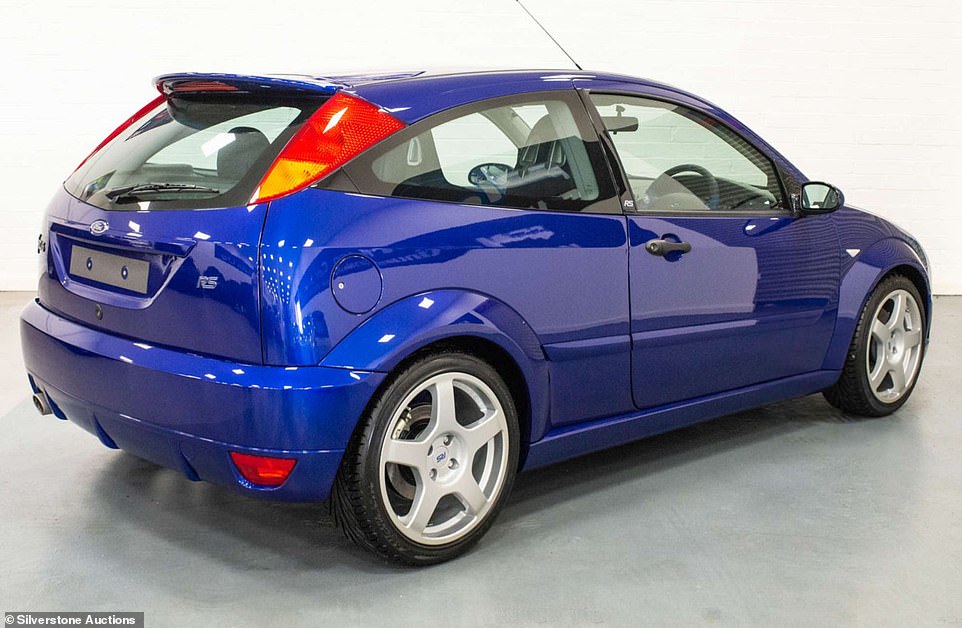 Its first and only registered keeper bought the car on 1 November 2003 and the auction house says it remains in ‘totally original ‘time-warp’ condition’ today.

The lone owner is known to be a ‘notable collector’ who, on delivery, immediately put it into heated storage, with the V5C showing zero previous registered keepers and the paintwork untouched for the best part of 20 years.

‘We are very lucky to deal with a vast array of special cars, but this is up there with the best with unrepeatable mileage and undeniable time-warp condition,’ a spokesperson for Silverstone Auctions said before the sale.

‘The Fast Ford market has always been led by low mileage, factory-original cars and none come better than this lovely Focus RS,’ they added.

Other Focus hot hatchbacks that sold for sizzling sums 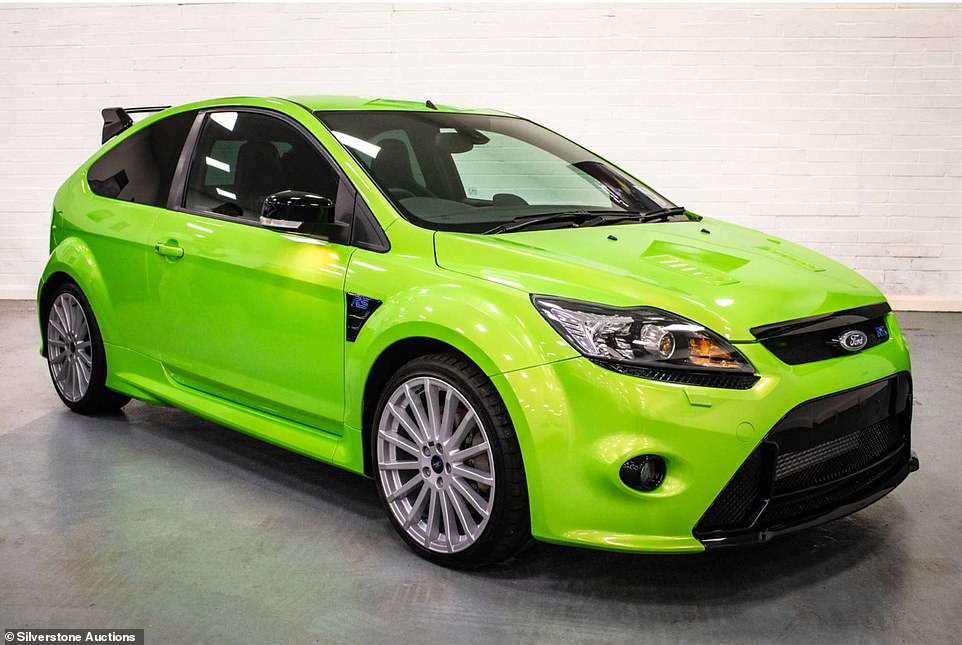 If you ask Fast Ford enthusiasts which is the standout colour for a Focus RS, it will be this Ultimate Green available for the Mk2 version. This example sold at the Birmingham auction for a massive £63k 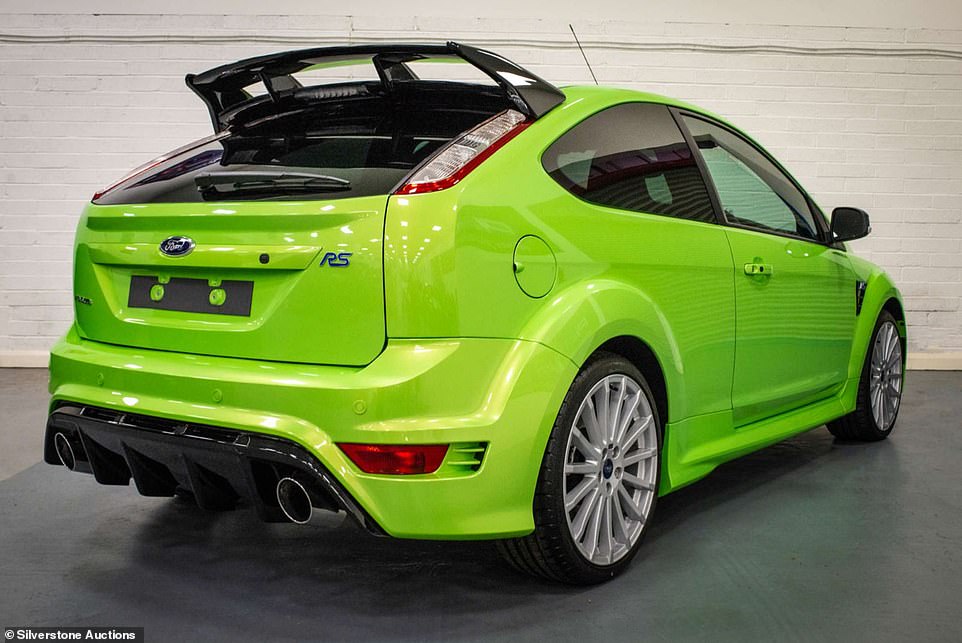 The car has lived a life of luxury in a heated garage and remained completely standard all its life, as it left the factory 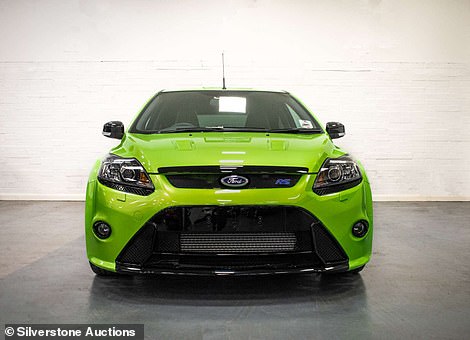 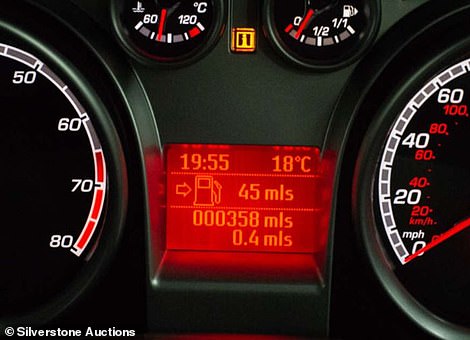 If you ask Fast Ford fanatics which Focus RS colour stands out the most, it will be the ‘Ultimate Green’ paint offered on the Mk2 version.

This 2009 example in that desirable tone – and with only 357 miles on the clock from new – sold for a massive £63,000. This is a world record for a ‘standard’ second-generation Focus RS, says the auctioneer.

The car has lived a life of luxury with one owner for 13 years who kept it in a heated garage to preserve its factory-fresh condition.

In the year it was built, the car would have cost £24,995 from a Ford dealer. That means the original keeper more than doubled their money in a little over a decade – though many will argue they haven’t enjoyed owning it, having barely driven the motor since acquiring it. 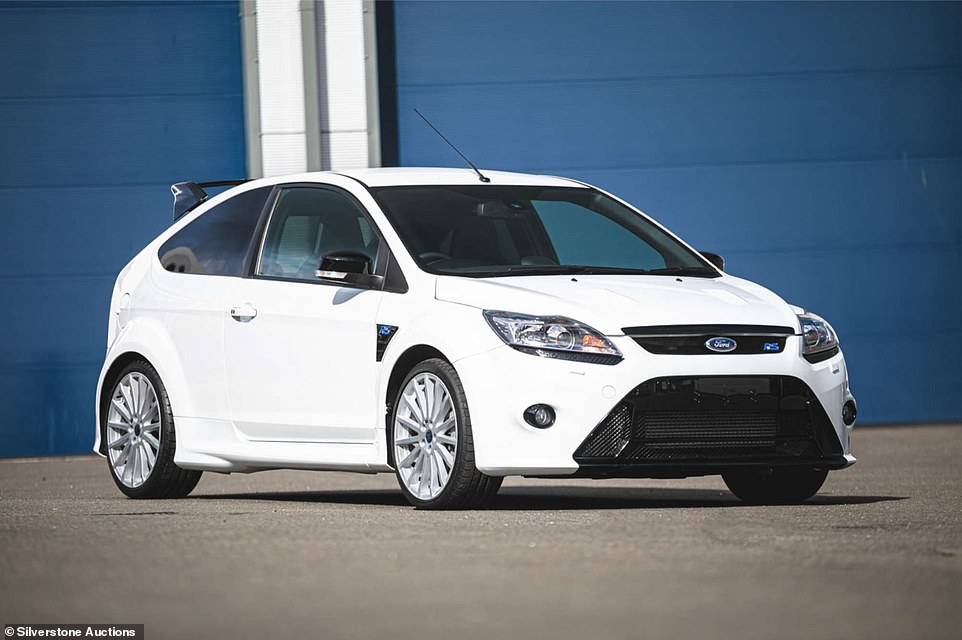 This 2010 Focus RS in Ice White paint was bought by a collector during the same auction for a winning bid of £56,250 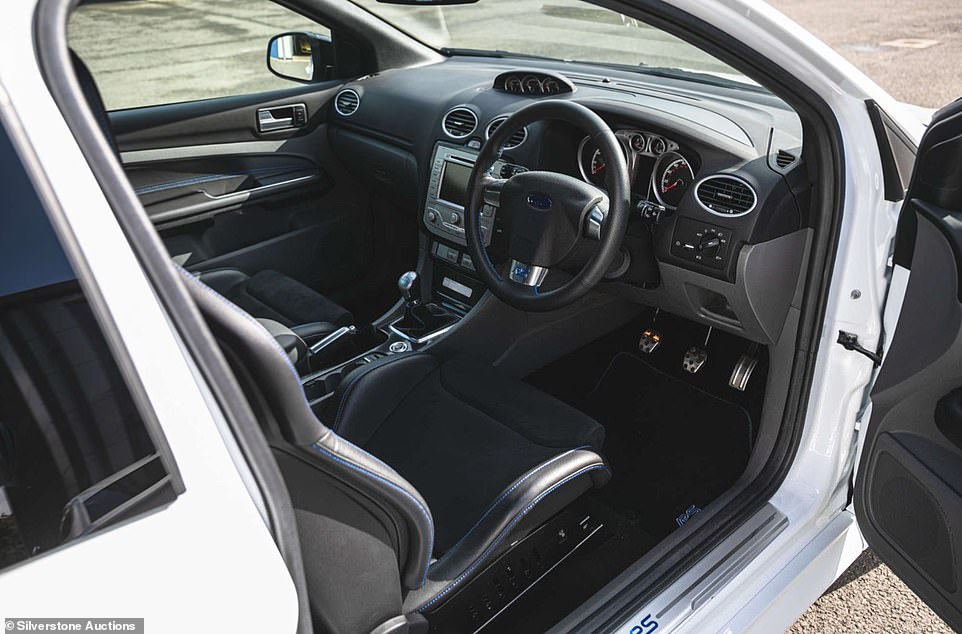 The stunning modern-era hot hatch has only 958 miles on the clock, despite having three previous owners over the course of its 12-year lifetime

A slightly later Mk2 RS from 2010 in Ice White paint also sold within its pre-sale estimate for £56,250 during the blockbuster Silverstone Auctions event.

It had three previous owners ahead of the sale who collectively drove it a mere 958 miles in 12 years.

Not all examples on offer found new owners, though, with the remaining two low-mileage Focus RS examples at the auction being among the 25 per cent of lots that failed to reach their reserve prices during the Silverstone Auctions NEC sale.

Another 2010 example – this time in Performance Blue paint – with two former keepers and only 54 miles on the clock didn’t reach its target, nor did a Focus ST ‘warm hatch’ with a barely-believable 0.3 miles on the clock.

Both remain available to buyers – you can find out more about each one by checking the auction results.