Do you work in UK hospitality and want to know how to nail customer service?

You could do worse than phone First Direct, apparently – because the AA’s Head of Inspections and Assessments, Paul Hackett, holds it up as an example of a business that nails it.

He mentioned the bank during a conversation with MailOnline Travel about the inspecting work of the AA – which assesses campsites, B&Bs and self-catering properties and dishes out stars to hotels and rosettes to restaurants – and he lamented that ‘the biggest problem in the UK hospitality industry is the hospitality itself’.

‘And it’s a shame because all of that is free. It’s not about having a world-class spa, or massive suites, money buys that kind of thing – money talks. But for me, it’s the hospitality, the softer attributes that carry the most weight. 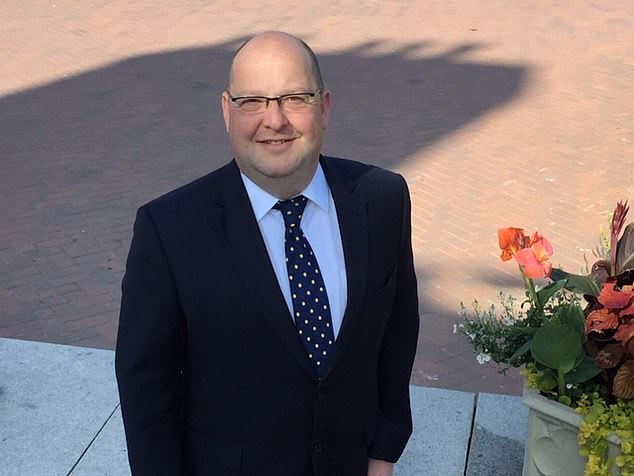 Paul Hackett, pictured, has been at the AA for 21 years, working his way up from inspector to area manager to head of inspections. This image will probably be pinned up behind every reception desk in the land…

‘There are hotels where the experience is very, very good. More often than not. But I think not enough people put the emphasis on good hospitality.

‘Some alternative industries really are exceptional at hospitality. Like First Direct.’

Mr Hackett mentioned First Direct as an example partly because it would be unfair for him to name a hotel that impressed with customer service.

His praise is priceless, after all.

He continued: ‘You’d expect them to be faceless and uncaring. But actually, the telephone experience with First Direct is very, very good.’ 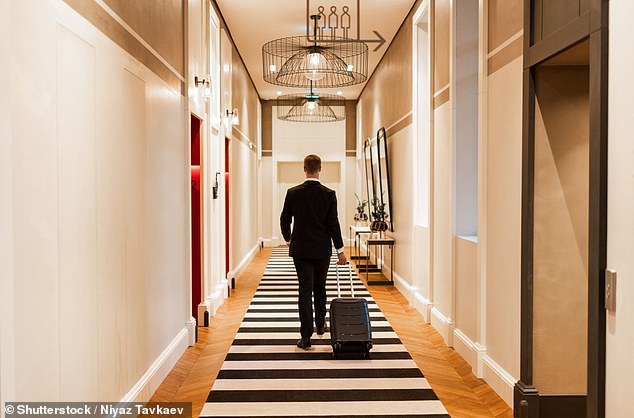 Paul said: ‘It’s not about having a world-class spa, or massive suites, money buys that kind of thing – money talks. But for me, it’s the hospitality, the softer attributes that carry the most weight’ (stock image)

However, Mr Hackett understands why customer service can be such a slippery fish.

He said: ‘Thing is, it’s people. And people, they’re diverse. You get introverts, you get extroverts, you get some people where it comes naturally, and some people where it doesn’t come naturally. And it’s really complex. And the very best hotels in the UK are the ones that nail it. It doesn’t matter whether it’s check-in, the bar, the restaurant. The very best hotels, which we signify with our red stars, they nail it all the time. But for some hotels, maybe it’s not their priority, but it should be. It’s the hospitality industry.’

Mr Hackett knows a thing or two about how it operates.

He has worked as a chef in a small family hotel, studied hospitality management at Bournemouth University, did a placement as a porter at Belmond Le Manoir aux Quat’Saisons and then had management roles in various three and four-star hotels.

He’s been at the AA for 21 years, working his way up from inspector to area manager to head of inspections.

And how many hotels has he stayed in? ‘Within the AA, probably all of them,’ he revealed.

His team, which also offers a ‘mystery guest’ assessment service, has checked into a few, as well. 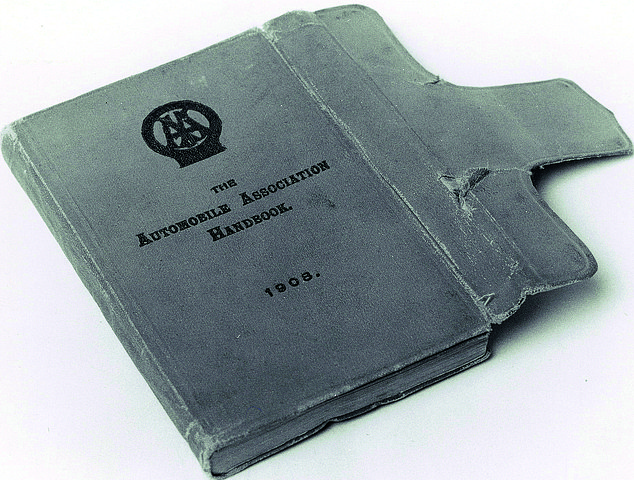 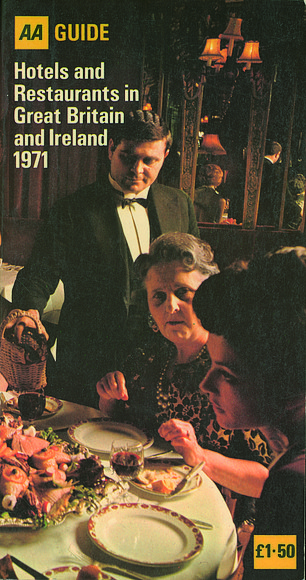 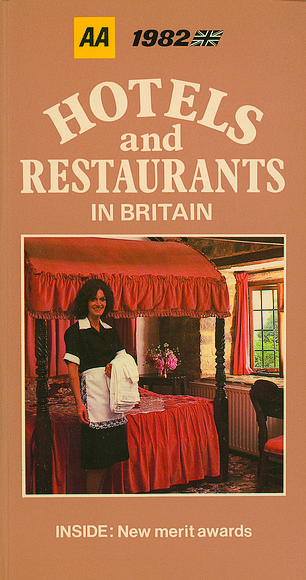 The AA’s guides have been invaluable over the years. The AA launched the first edition of a combined guide to Great Britain’s hotels and restaurants in 1966

In a year, a patch inspector will be away for 145 nights.

‘It’s an isolated role,’ said Paul, ‘but we sometimes buddy up on visits for training purposes. For example, someone who hasn’t inspected a five-star might go with someone who has. And you’re always talking to people. It’s a very enriching job.’

The job of Paul’s team where hotels are concerned is to assess whether a property is good enough to gain from one to five AA stars – an accreditation that costs a fee – and to carry out yearly re-inspections.

The assessment is carried out during a one-night stay, with the hotel footing the bill for the bed and breakfast element and the AA paying for extras that are ‘tested’, such as dinner, afternoon tea and bar drinks.

‘We are assessing the hotel from the minute we pick up the phone to make a reservation to the minute we check out,’ said Mr Hackett.

And do the hotels know the AA is turning up?

However, some wily hotel operatives might already have caught on and sometimes there’s a ‘we knew who you were’ look at reception in the morning, said Mr Hackett.

But not because a notebook gave it away.

Mr Hackett continued: ‘We don’t walk around with notebooks, a lot of it is logged mentally. I think generally it’s our profile, because generally we are mid-week, single business person and if you’re going to a country house hotel for instance that is very much a couple’s destination you can stand out a little bit. Some hoteliers are very experienced and some of them just get a feel. 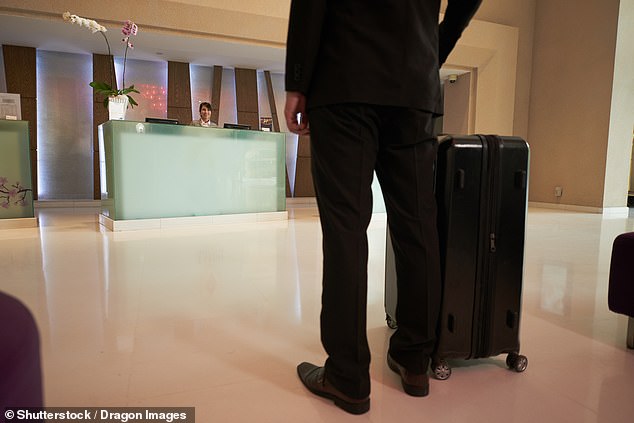 ‘The other thing that can give it away is that if one of the inspectors checks in, then does a room service, then has a cup of tea in the lounge, then has a drink in the bar, then has dinner… if somebody’s really interested in what they’re doing then they might think that’s a bit unusual. However, there are many hotels that are full, with in excess of 50 or 60 rooms, upward to the hundreds, and one person can easily just blend in.

‘If they’re scrutinising everybody who comes through their door and they’re looking for it then they might be able to spot an inspector. But how many people actually have that time?’

The purpose of the visit, stressed Mr Hackett, isn’t to ‘make or break people’, but to ‘support them, give them some objective feedback and help them’. 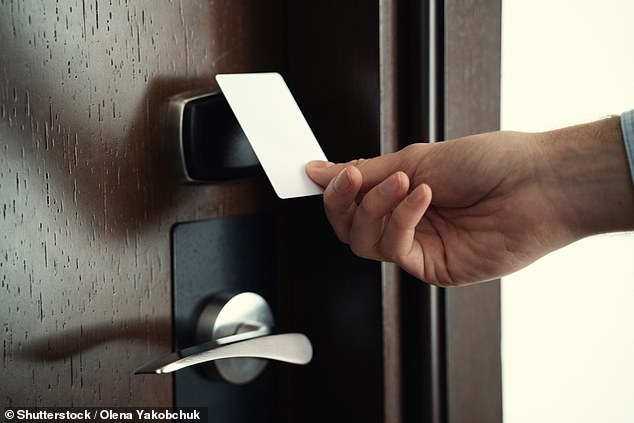 In a year, an AA patch inspector will be away for 145 nights

‘We’re ultimately assessing the hospitality of the team. Assessing the service delivery, how efficient, how attentive. And we’re giving feedback based on cleanliness, on the bedroom product and the public areas. We are telling you how a guest feels about your hotel in a very professional and objective way.

‘The feedback is to make themselves better. So they might have someone on check-in who’s amazing, who’s warm, chatty, friendly, engaging, who covers everything you could possibly want on a check-in and that’s really valuable feedback because a general manager or operations manager can then go back to that person, tell them they did a great job, and that’s really motivational. It’s a hard industry, and that’s part of what we do.

We are assessing the hotel from the minute we pick up the phone to make a reservation to the minute we check out. We declare who we are on check-out

‘If at that same hotel and at check-out the person is, you know, they’re not making eye contact, their body language is closed, there’s no dialogue, there’s no interaction. Again we can share that with the general manager because that becomes a training opportunity.’

The AA is looking for minimum scores in hospitality, service, food, housekeeping and bedrooms and bathrooms to target for that all-important star rating.

And because the hotel has put itself forward for it, it’s usually a sign, said Mr Hackett, that it’s a quality product, so it’s not often that his team sees shocking sights – vermin in corridors for instance – though ‘weird and wonderful things have been found on the top of wardrobes and under beds’.

And what’s the main difference between one and five stars?

‘Degrees of quality linked with levels of service,’ said Mr Hackett. ‘Facilities come into it, but it’s less of a focus. We don’t say you have to have a swimming pool to be a five-star hotel.’

Remember to smile, and you’re halfway there.