A baby who was born after just 22 weeks of pregnancy has ‘graduated’ from intensive care – and a touching video captured the moving ceremony.

Cullen Potter, from Alabama, was born weighing just 13.9 ounces – far off the average weight of a baby which is between five pounds, eight ounces and eight pounds, thirteen ounces.

His proud mother, Mollie Potter, says she was told her baby had just a two per cent chance of survival at birth. 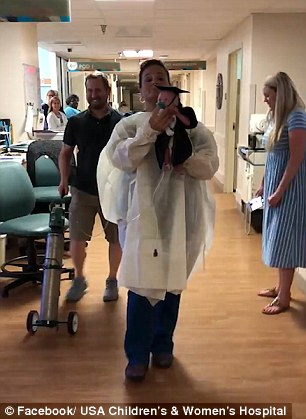 But the family would not give up, with her partner calling 16 hospitals in three states to find one that would save him.

Now after 160 days in hospital he is finally able to go home.

Ms Potter is now able to stand tall and exclaim: ‘Well, here’s our 2 per cent. Perfect in every way. God is good big boy.’

Cullen now weighs five pounds and eleven ounces and is said have gotten over any major health difficulties.

To celebrate the miracle baby was given a faux graduation ceremony from the intensive care unit at USA Children’s and Women’s Hospital in Alabama. 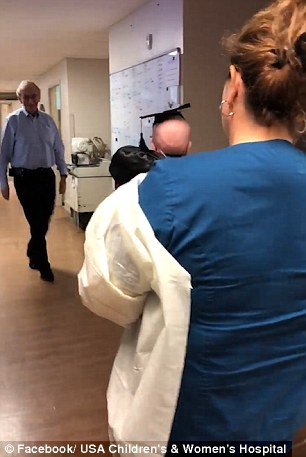 Cullen Potter (pictured) now weighs five pounds and eleven ounces and is said have gotten over any major health difficulties. He was able to return home after 160 days in hospital

Video footage taken of the ceremony shows nurse Jewel Barbour proudly parading the baby along a hallway in the ward.

Ms Barbour had cared for the baby during his time on the ward.

Cullen is dressed up in graduation garb and music is played throughout the touching ceremony.

Writing on Facebook, Ms Potter described her family’s endless battle to ensure the best care for her son.

‘Well, here he is. Alive and thriving. Never give up.’

She also praised USA Children’s and Women’s Hospital for the work they carried out on her son.

She said: ‘They are amazing at what they do. They believe in these small babies and give them the fighting chance they deserve.

‘I pray the more doctors and hospitals see stories like my sons and many more, that they will reconsider their policy and give all the babies the chance they deserve.’