The American ‘Highland Games’ is underway with up to 40,000 people celebrating Scottish culture

The American equivalent of the ‘Highland Games’ is underway, as 120 Scottish clans gather to celebrate Scottish culture, athleticism and cuisine.

The 64th Grandfather Mountain Highland Games takes place over the second full-weekend in July every year in the MacRae Meadows, two miles north of Linville, in North Carolina.

The event is claimed to be the largest gathering of Scottish clans anywhere in the world. Typically it draws between 30,000 – 40,000 people, according to Watauga Democrat.

It began with a torchlight ceremony on Thursday, known as the ‘calling of the clans,’ which is a traditional method of calling the clans into battle.

Each clan brought their own torch to announce themselves as ‘present’ at the games opening service after sundown, before adding it onto a large bonfire. The celebration was accompanied by music, as the clansmen surrounding them raised their arms in prayer.

From there, the festival began with the sound of bagpipes blaring highland melodies, followed by a four-day celebration of all things Gaelic.

The games themselves consist of traditional Scottish sports from the caber toss, where a competitor throws a large tapered pole, typically made from a larch tree, as far as they can.

Others weight-throwing events include the hammer and the sheaf, where competitors launch a woven bag of straw over a horizontal bar above their head, with a pitchfork. Each bag typically weighs around 16lb and to get through each round, the competitor must clear the bar without touching it. They then progress onto the next round where the bar is raised higher and higher until one victor is left standing.

Dee Dee Arbutina (above), of Raleigh, North Carolina, lets go of her hefty weight in a bid to win a weight toss event during the Grandfather Games. The games celebrate the history and culture of Scottish people. During these events festival-goers celebrate traditional strengthening sports including the caber toss, the hammer and the sheaf 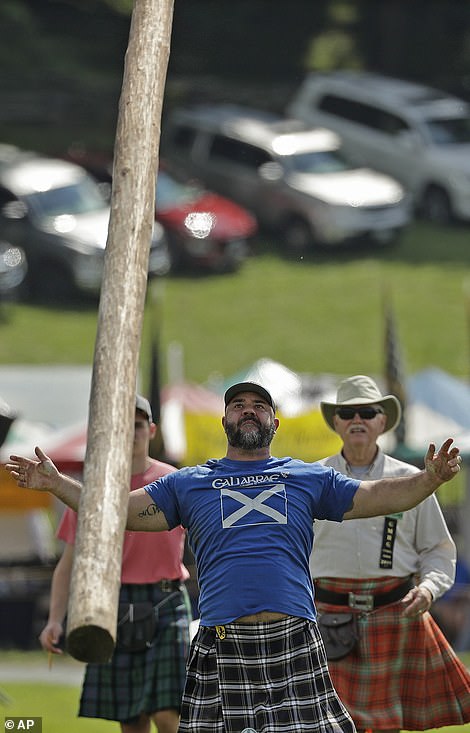 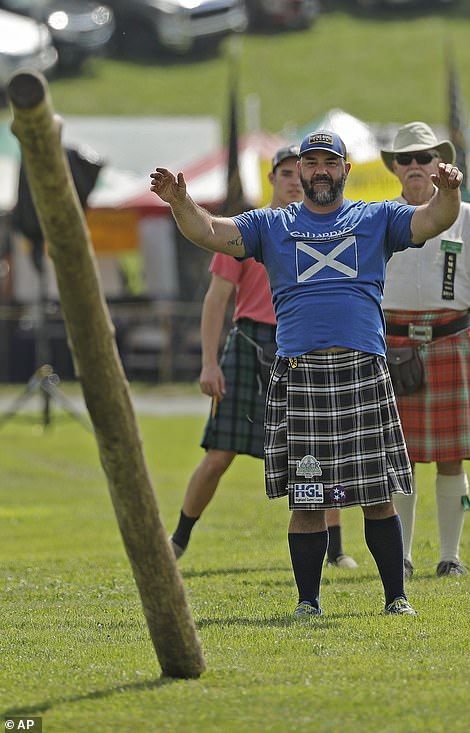 Jason Woods, (above) of Rocky Top, Tennessee, lifts his broad arms in celebration of winning the caber toss, during the four-day festival. The word caber refers to the Gaelic word for ‘wooden beam’ and is typically made of wood around 19ft in height and 175lb in weight. Competitors then launch the caber into the air as far as they can 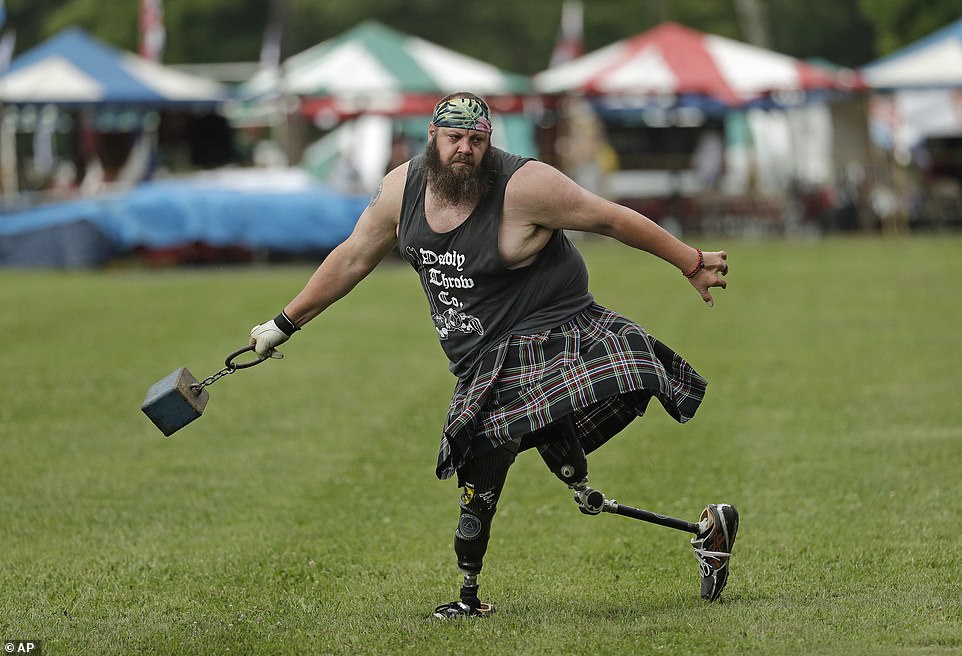 Matthew Hall (above), of Roanoke, Virginia, warmed up before the weight toss event during the 64th Annual Grandfather Mountain Highland Games at MacRae Meadows in Linville, North Carolina, on Friday. The four-day  event is believed to be one of the largest reunions of the Scottish clans in the world, the event draws between 30,000 – 40,000 people 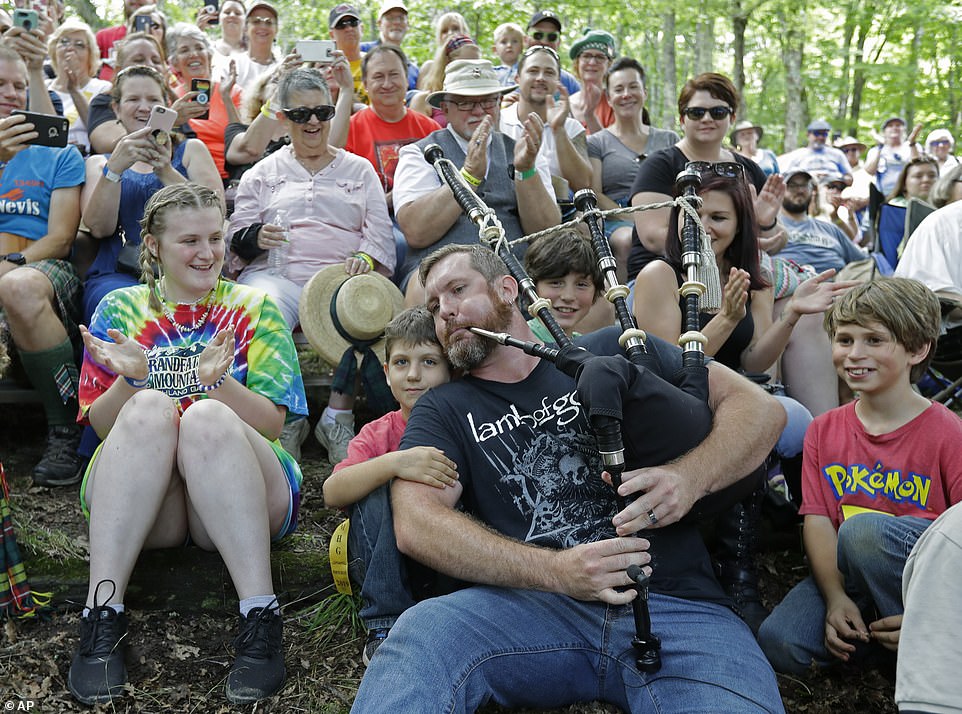 Neil Anderson (center), of the band Seven Nations, plays his bagpipes as he sits with the crowd. More than 120 clans have attended the event and between 30,000 – 40,000 people will join in the celebrations of Scottish culture, traditions, music, food and drink

Tug of wars remain a classic battle of strength for the clans, as they gather their strongest members for the event to see who can ‘pull home’ victory.

The weight events feature alongside a grueling footrace called ‘The Bear,’ which saw 867 runners take on the challenge this year. The race saw them climb 1,568ft in a five-mile race to the summit of the Grandfather Mountain.

‘It was a perfect day for running,’ race director Jim Deni wrote online, ‘and this is a popular race.’

This year’s winner, Johnny Crain, 27, from nearby Blowing Rock, accomplished the feat in 30:58.7. The time was 40.3 seconds shy of his record-breaking run in 2017, which he attributed down to recovery from injuries.

‘It’s just so cool running through the Highland Games,’ Crain said. ‘There are just so many people there … and they get so excited about it for us, and that really helps.’ 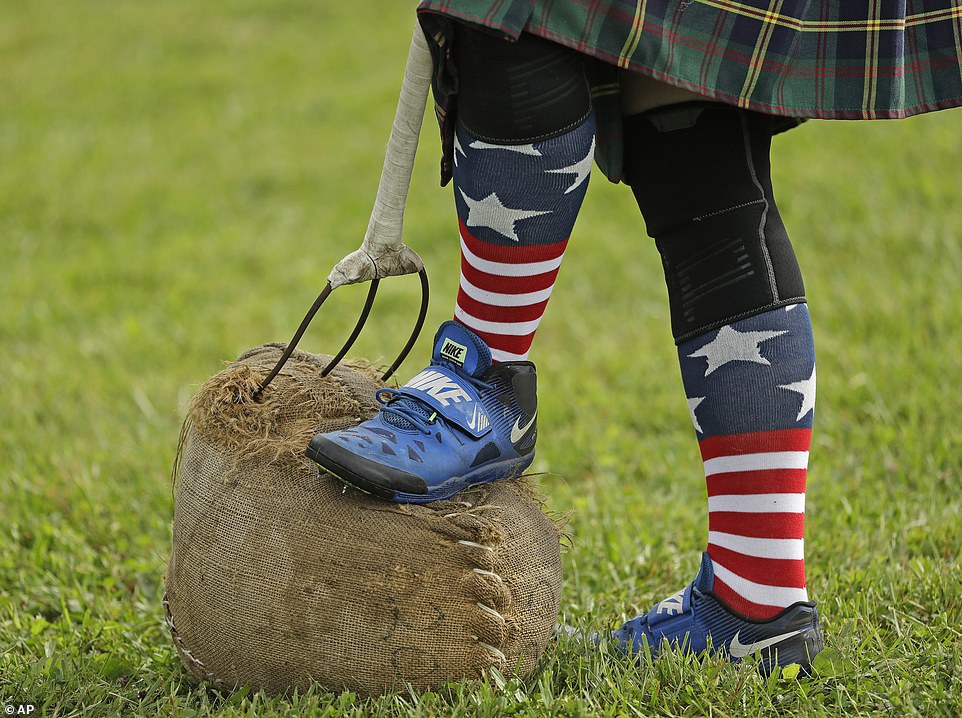 One competitor prepares for another traditional Scottish sport, the sheaf toss. The sheaf is a woven bag that is stuffed with straw and typically weighs around 16lb. Competitors then have three attempts to try to use a pitchfork to launch the sheaf over a horizontal bar above their head. They must cleanly clear the bar in order to progress onto the next round where the bar’s height is raised until a clear winner is announced 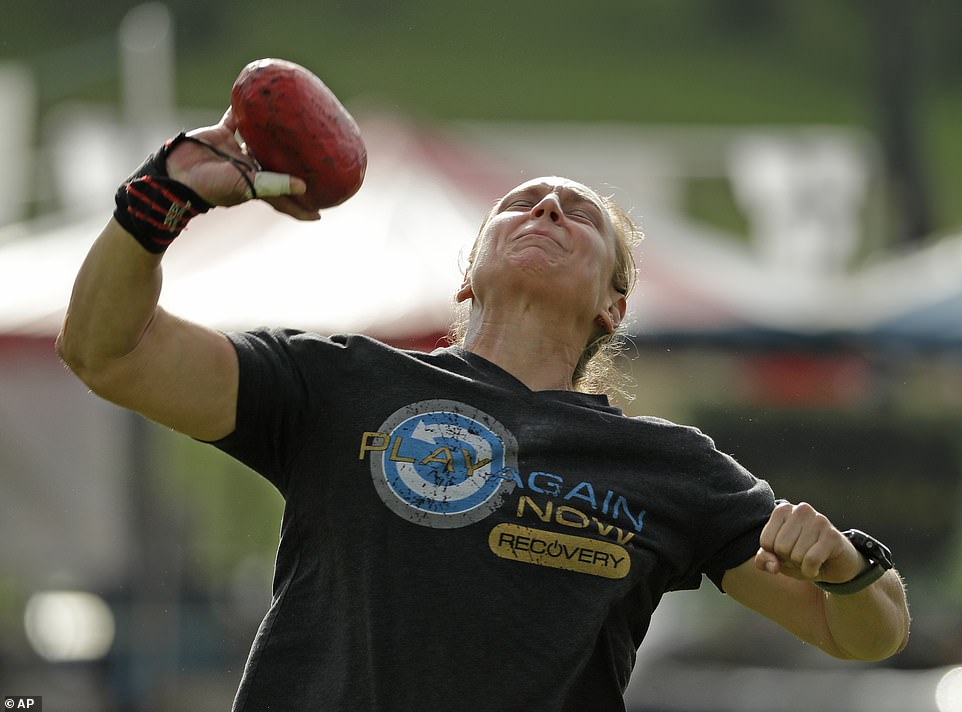 Adriane Wilson (above), of Irma, South Carolina, competes in the weight throw event on Friday that appears similar to the discus. This is one of many sports including the caber toss, the sheaf throw and other weighted events to feature in a celebration of Scottish culture 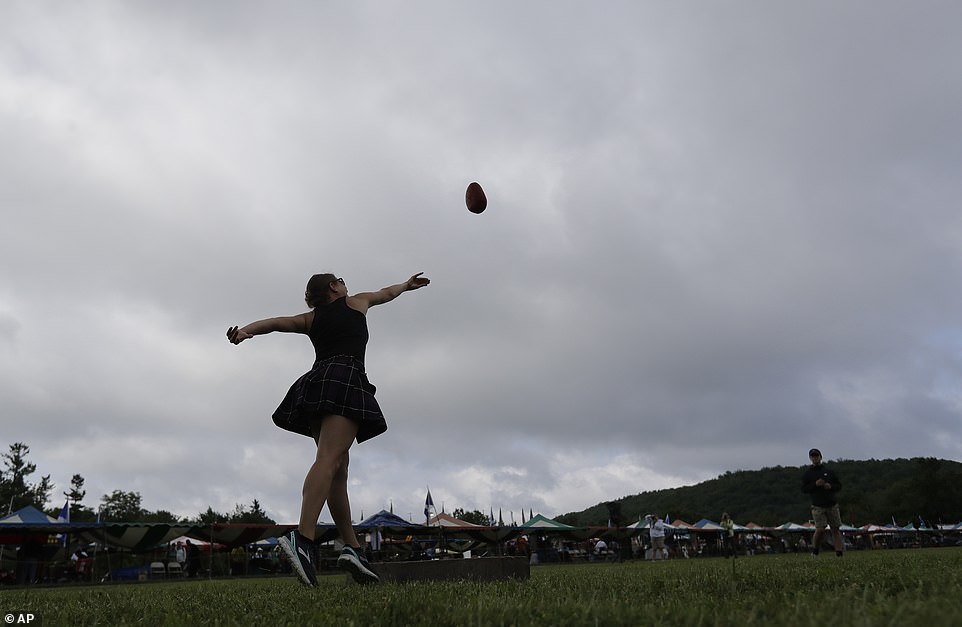 Launching one of the weights high into the air, Jodi Casher, of Asheville, North Carolina, partakes in one of the weight throw battles during the 64th Annual Grandfather Mountain Highland Games at MacRae Meadows in Linville, North Carolina. Between 30,000 – 40,000 people are expected to attend the event, comprising over those affiliated to the 120-plus clans and other spectators 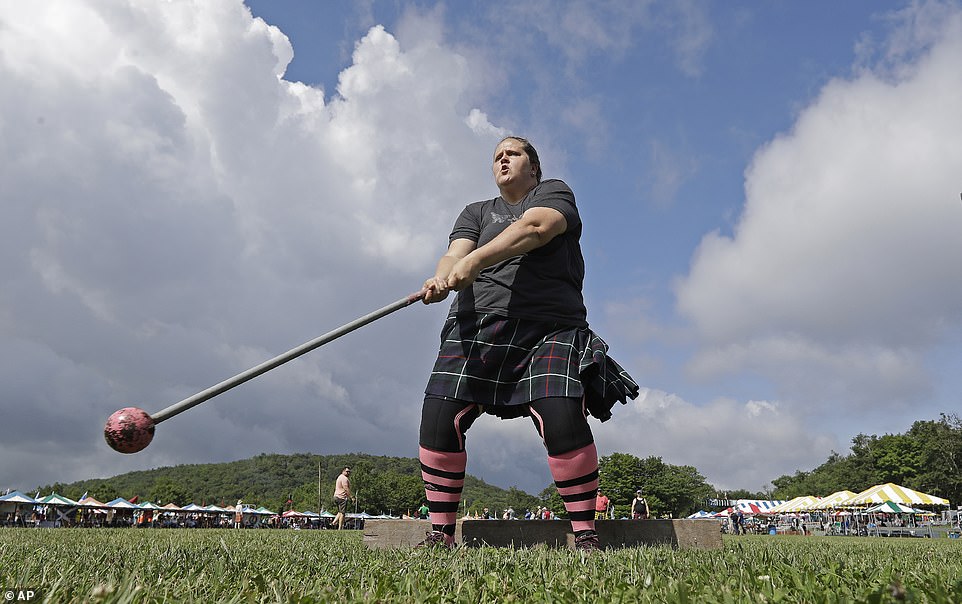 Heather Haddock, of Washington, partakes in the ‘hammer throw.’ The event saw a metal ball atached by steel wire to a grip swung around in a circle until being released. The further it is thrown, the more points are accumulated. From there a winner is declared

The Scottish Cultural Village, which is heading into its fifth year, discuses aspects of Scottish culture from blacksmithing, to kilting, weaving, piping and drumming.

Lectures vary from Gaelic tradition to the differences between Scottish and American Whiskey, as well as the folklore surrounding the infamous ‘Nessie,’ more commonly known as the Loch Ness monster.

Alongside athleticism, the event showcases some of the celebrated drinks and food of Scotland. These include Scottish whiskey and Celtic cuisine of haggis, shepherds pie, sticky pudding and many others.

The Grandfather Mountain Highland Games will conclude on Sunday with the ‘Parade of Tartans.’ During the service, the clans gather their most ‘important members’ to parade around a track where they are cheered on by the crowds and the sound of bagpipes. 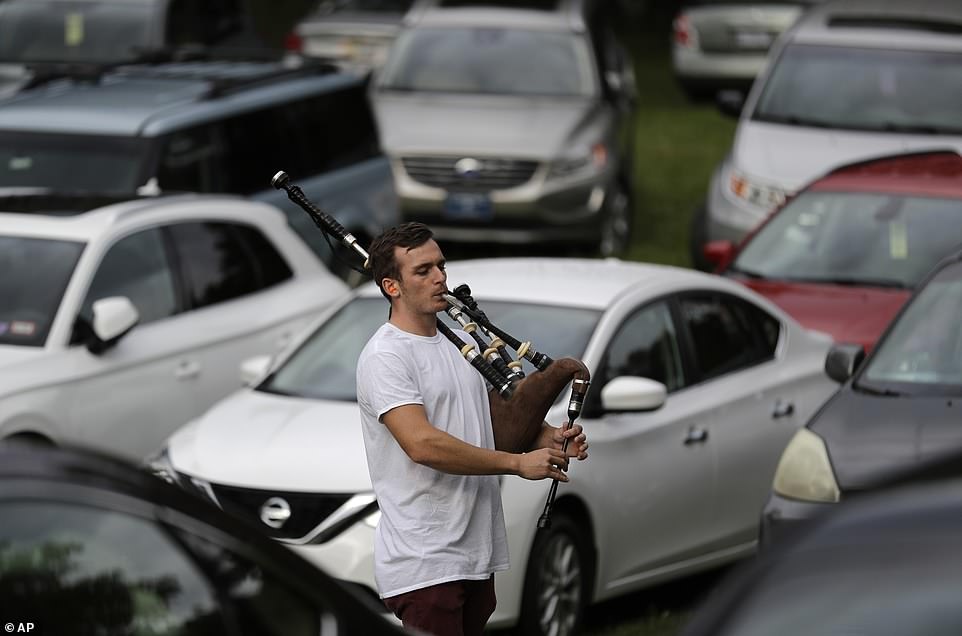 One man practices on a bagpipe before the opening torchlight service to begin the 64th annual Grandfather Mountain Highland Game. The torch lighting ceremony also referred to as the ‘call of the clans’ dates back to clan members announcing their presence during a battle by bringing their torch to add to the bonfire. This year, during the festival, this event happened on Friday after sundown and featured alongside music and Celtic cuisine 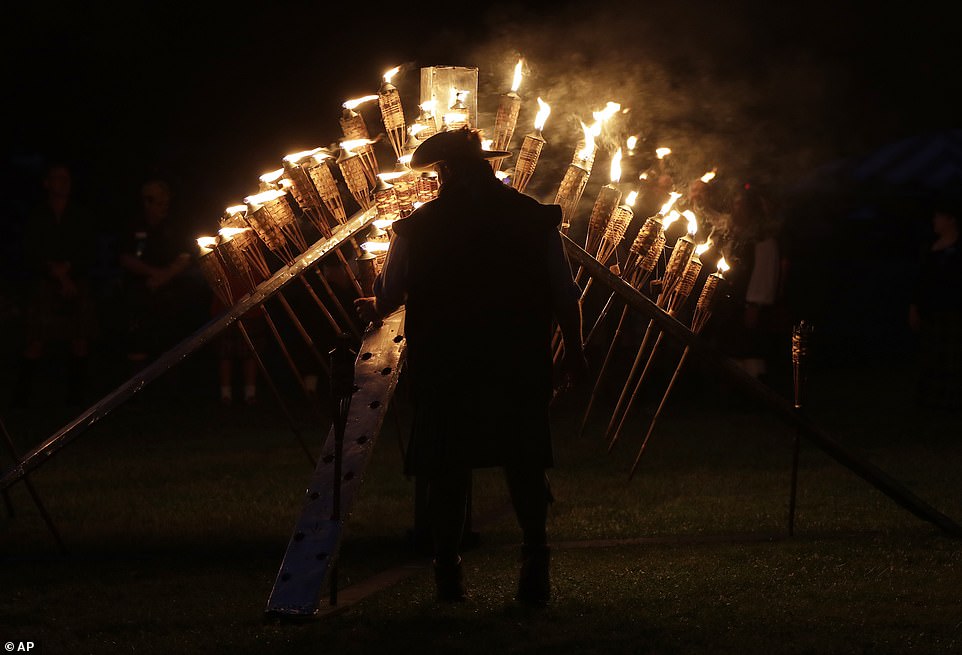 A man placed his torch into the cross during the opening torchlight service. Each torch represents a clan in attendance as part of the ‘calling of the clans’ that happened on Friday. Traditionally this was a way to call the clans to war, with each clan placing their torch upon the large bonfire 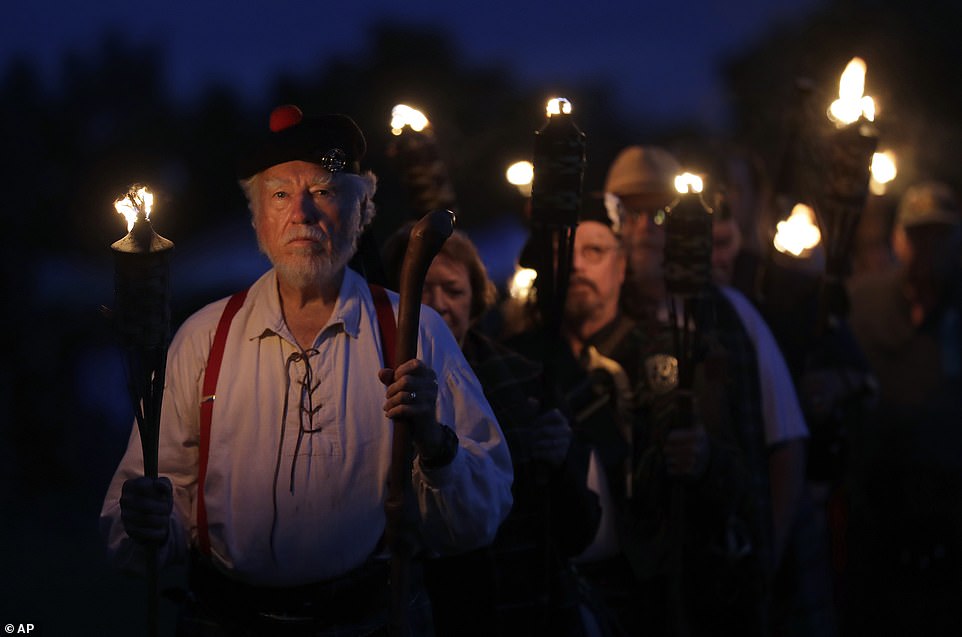 Members of various Scottish clans wait to announce their arrival during the opening torchlight service. During the event bagpipes play Celtic songs and visitors celebrate the old traditions of Scotland 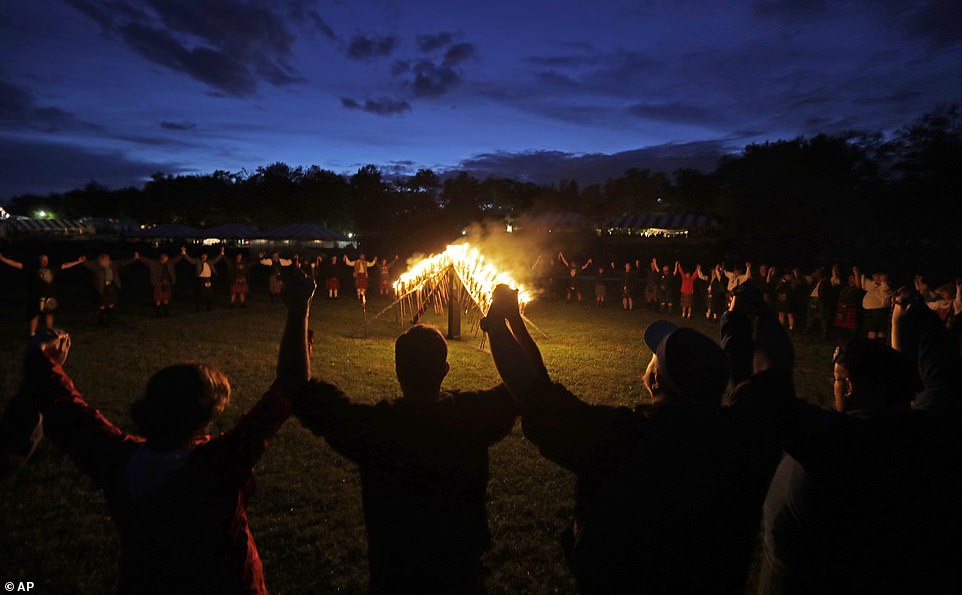 More than 120 clans attended the opening service. As the crowd lift their hands in prayer, while listening to the sound of the bagpipes 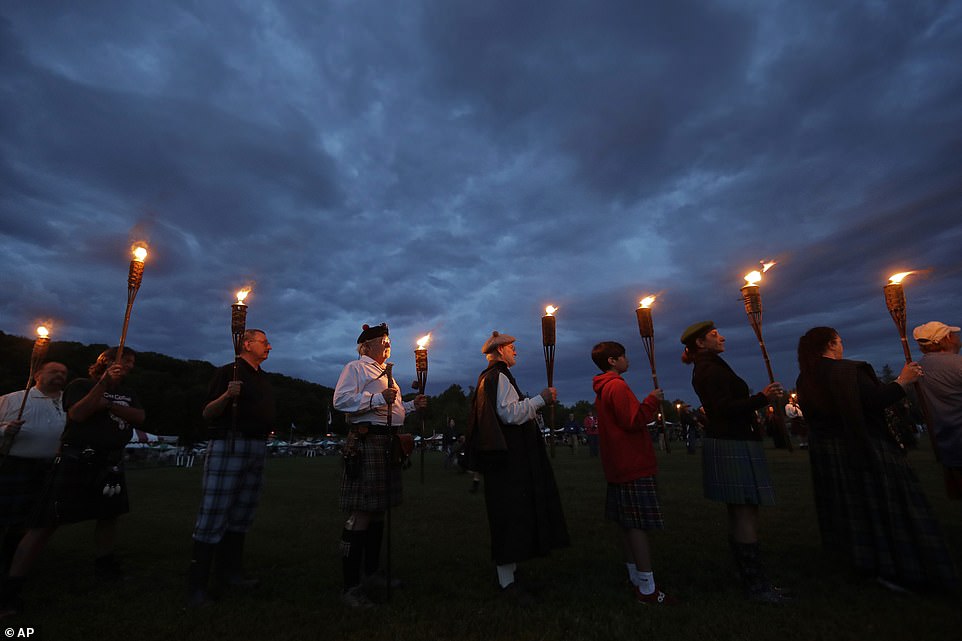 Members of various Scottish clans wait to announce their arrival during the opening torchlight service, also known as the ‘calling of the clans’ 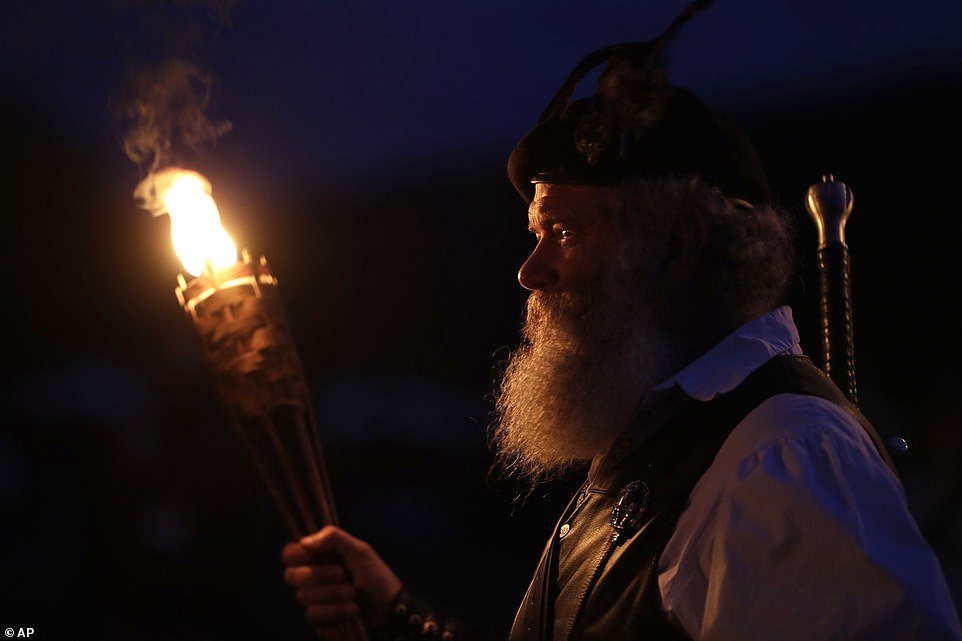 Al Thompson (above), of Milan, Indiana, pictured waiting to announce his clan’s arrival during the opening torchlight service. His will have joined over 120 torches from the other clans in the ceremony that dates back as a traditional ‘call to war’