Five years ago, 73-year-old Jean Short read in these pages about the plight of a man waiting for eight years for a kidney transplant.

Dr Simon Howell, 39, from Sussex, was born with a condition called reflux, where urine backs up towards the kidneys instead of flowing down to the bladder.

The histopathologist — a doctor studying diseases of the tissues — had been on dialysis for eight years. He estimated the odds of finding a suitable donor in time were about one in 10,000.

‘My heart went out to that poor man,’ recalls Jean. What she did next was extraordinary. ‘That morning, I phoned NHS Blood and Transplant to offer my kidney to him or anyone else who needed one,’ she says. ‘I knew if I could take the fear of death away from a young person and give them a normal, healthy life, I had to do it.’

Within 16 months, Jean, now 78, had donated her kidney — unfortunately, she was not a tissue match for Dr Howell, but she was a perfect match for an unidentified 40-year-old. Her right kidney was removed on August 18, 2015 and transplanted the same day.

And that would have been that, had it not been for the stream of letters and cards her grateful recipient sent via the hospital transplant co-ordinator.

Despite both parties remaining anonymous to each other, as is the case in all organ donations, there came emotional messages on the anniversary of their operation, at Christmas and on Mother’s Day.

‘Happy Mother’s Day “Mum”,’ one reads. ‘I just wanted you to know I am thinking about you always. Though I may never be able to show my gratitude in person, I want you to know you have completely changed my world.’

Jean says: ‘I loved getting those letters. Every time I got one, I practically threw a party.’

Four years later, the recipient of Jean’s kidney, Chetan Joshi, a 44-year-old graphic designer from North London, is sitting next to her, smiling, in the home in West Mersea, Essex, Jean shares with her husband, Ken, 80, a former marine joiner.

Their meeting was organised after the transplant co-ordinator gained permission from both parties to release their contact information. 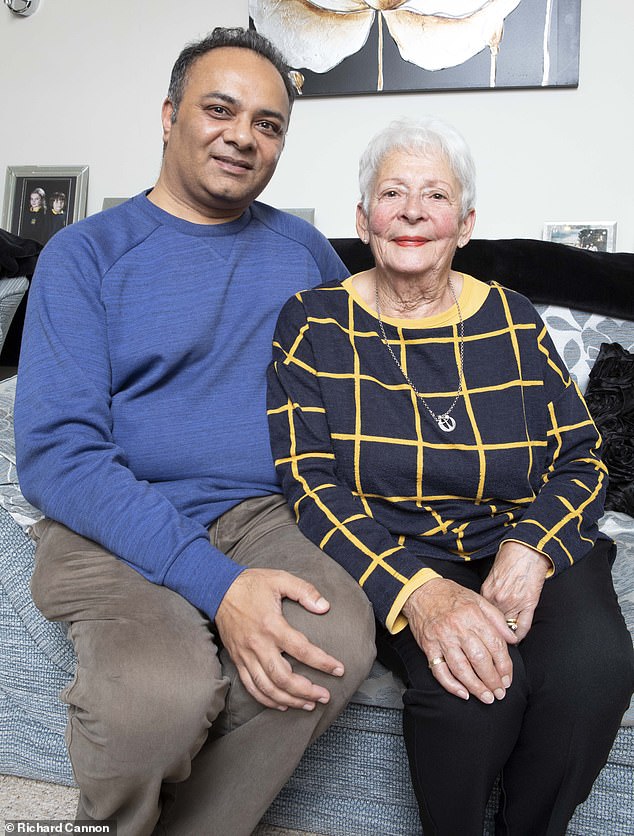 Chetan and Jean are separated by age, gender, background and ethnicity (Chetan’s Indian parents came to the UK in the Seventies), yet it’s as if they’ve known each other for years.

When they arranged to meet in May, Jean was so nervous she booked a table at a restaurant for the wrong day. They felt an instant, unshakeable bond.

But why the Mother’s Day cards? ‘Because when Jean gave me her kidney, she gave me a new life,’ says Chetan. ‘And that’s something only a mother can do.’

Occasionally, a living donor and their recipient meet, but this is not common, says Lisa Burnapp, lead nurse for living donation at NHS Blood and Transplant.

Around 6,100 people in the UK are waiting for an organ transplant — of those, 4,752 need a kidney. Type 2 diabetes, one of the biggest causes of chronic kidney disease, is increasing year on year.

More than a third of people on the list are from black, Asian or minority ethnic backgrounds and face a six month longer wait for an organ than white patients — partly because they are more at risk of these conditions, and donation rates among these groups are much lower. Also, someone from the same ethnic background is more likely to be a good match.

Chetan’s kidneys had been irreparably damaged by a stroke in 2003. Strokes are linked to hardening of the arteries, which occurs during the ageing process and can also be exacerbated by smoking and drinking.

Yet Chetan was just 30 and is a lifelong vegetarian who has never smoked or drunk alcohol. ‘Doctors were at a loss to explain it,’ he says. ‘I woke up in intensive care wearing a nappy. It was undignified. I had to learn to dress, wash and shave all over again.’ 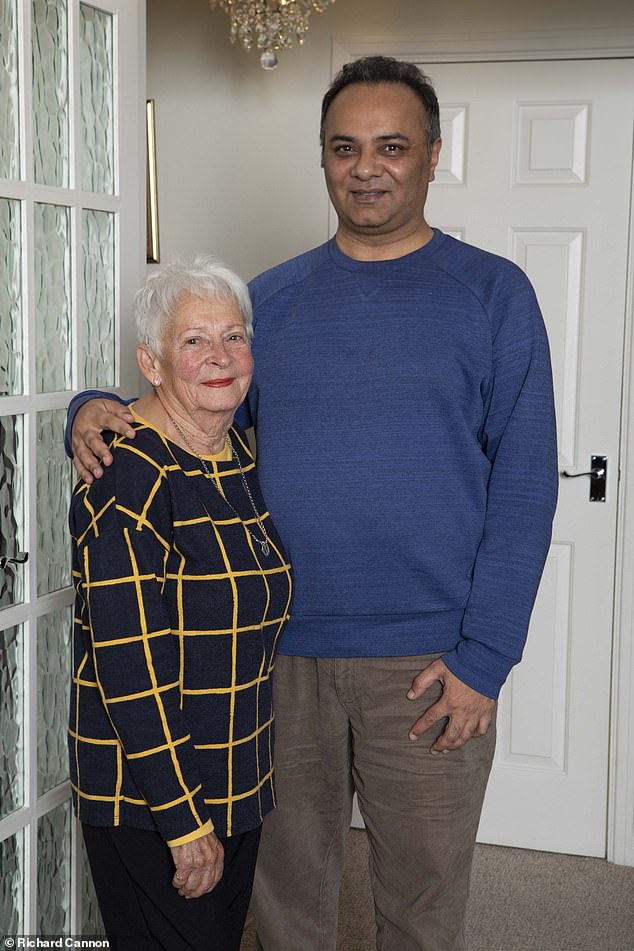 Chetan and Jean are separated by age, gender, background and ethnicity (Chetan’s Indian parents came to the UK in the Seventies), yet it’s as if they’ve known each other for years

While Chetan recovered 95 per cent of his speech and mobility, blood and urine tests revealed his kidneys were failing. Ten years later, he was told both kidneys were no longer functioning and he was placed on the transplant list.

While he waited, he had to start dialysis — a time-consuming and sometimes painful process where the blood is ‘washed’ in a machine and fed back into the body via a tube connected to a blood vessel in the arm. Each four-hour session must be repeated three to four times a week in hospital.

‘I was exhausted all the time,’ says Chetan. ‘My parents and two younger sisters — who were not a tissue match — were desperately worried. I wanted to get on with my life, but I couldn’t.’

Then, one Monday morning in March 2015, Chetan’s phone rang. ‘A dialysis nurse told me a lady had come forward to donate her kidney. It looked a perfect match.

‘I knew you could get a kidney from a living donor, but I never thought it would happen to me.’

Jeremy Crane, a consultant transplant and vascular surgeon at Hammersmith Hospital in London, who performed Chetan’s transplant, says: ‘You get these magical moments in kidney transplantation that don’t happen in any other specialty. The people don’t often meet, so I got shivers down my spine when Chetan told me he had met his donor.’

Mr Crane’s interest in transplant medicine was sparked after his own father, a Manchester GP, had a kidney transplant. ‘I understand the difficulties,’ he says.

After contacting NHS Blood and Transplant, Jean had mental and physical tests and her blood and tissue types were entered into the database. When the match was found, she was called for surgery.

As Jean recovered at The Royal London Hospital in Whitechapel, Chetan remembers standing by a window at Hammersmith Hospital with his sisters, watching as a motorbike with a white box on the back pulled up outside.

‘We guessed that it contained my kidney,’ he says. ‘Half-an-hour later, I was wheeled into surgery.’

The procedure took Mr Crane two-and-a-half hours. ‘It doesn’t matter how many transplants you’ve done — watching a healthy kidney “pink up” in a sick patient is always magical,’ he says.

After his stroke, Chetan often struggled to express himself. ‘But when I wrote to my donor, my words became more articulate and emotional,’ he says. ‘From day one, I wanted to say “thank you” properly.’

The pair have since met a number of times and are in regular contact.

And what of Dr Simon Howell, who first sparked Jean’s interest? Simon told Good Health he had a second kidney transplant in 2018 from a deceased donor (the first in 2005, from his mum, failed). His life has been transformed, but he is not healthy enough to return to working in medicine.

Before Christmas 2016, his family suffered a further setback when Simon’s wife, Anita, was diagnosed with breast cancer.

Over the following year, she had surgery, chemotherapy and radiotherapy and is now in remission.

During this time, the couple published a series of children’s books about cancer treatment and kidney failure (including B Is For Breast Cancer and H Is For Haemodialysis, amazon.co.uk), to help their own children, James, now seven, and Sarah, 12, understand their ordeal.

The outcomes for Chetan, Simon and Jean are a testament to the generosity of donors and to the transplant service. ‘I’m living just as well with one kidney as I did with two,’ says Jean. ‘I’d do it again in a heartbeat.

‘I wanted Good Health readers to know there was a happy ending and to encourage others to donate and help someone else live happily ever after.’