The atmosphere is the Napoli squad is ‘calmer than you would think’, coach Carlo Ancelotti claims

The atmosphere is the Napoli squad is one of harmony and is ‘calmer than you would think’, coach Carlo Ancelotti claims

The atmosphere is the Napoli squad is one of harmony and is ‘calmer than you would think’, coach Carlo Ancelotti said on Tuesday as he broke a club-enforced silence after three tumultuous weeks.

Napoli face Liverpool in a key Champions League match on Wednesday amid reports that the players are to be fined between one quarter and one half of this month’ wages by the club for refusing to stay in a training retreat earlier this month.

Napoli, Serie A runners-up three times in the last four seasons, are also on a run of six matches without a win in all competitions and their challenge for the league title has petered out with barely one third of the season gone.

They will, however, qualify for the Champions League last 16 if they win Wednesday’s Group E match at Anfield or if Salzburg fail to win at Genk in the other match.

Ancelotti, who was obliged to speak to the media under competition rules, refused to discuss the reports of fines but said his players were determined to turn the corner.

‘We are talking about the past but what happened has happened,’ he said when asked about the fines. ‘Now, we are concentrating on the present and on the pitch.’ 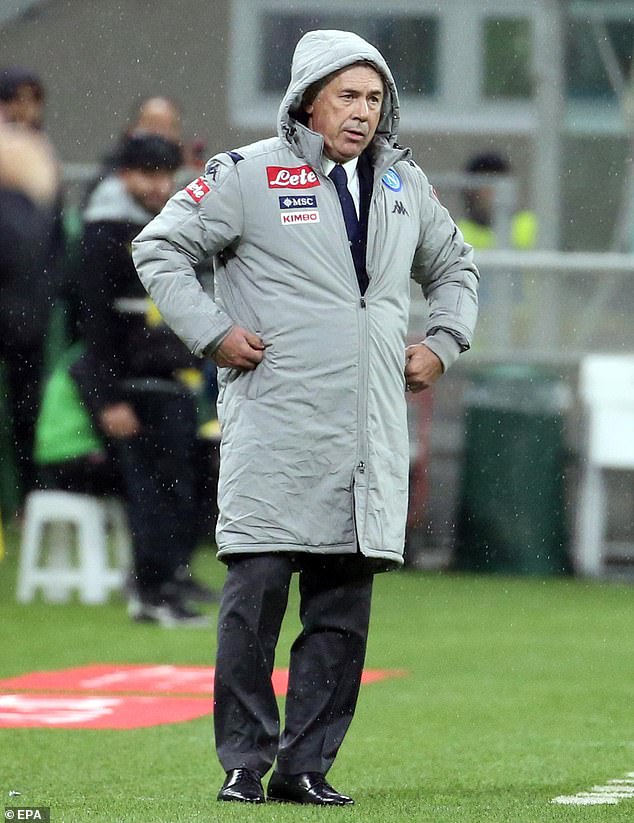 ‘The media silence helped us concentrated on the pitch but has also stopped giving air time to those who have talked all sorts of nonsense,’ said Ancelotti, who added that he had never considered resigning.

‘The club knows it needs to do better, the team the same, the coach also and we are all involved and we want to do it tomorrow.

‘But I assure you that there is full harmony. That’s why I never thought of resigning. In thirty years of my career, I’ve never been without the confidence of the club and the players. And this time, too, it’s like that.’

Ancelotti said that captain Lorenzo Insigne did not travel because of an elbow injury and that midfielder Fabian Ruiz and left back Mario Rui were also doubtful.