The Breakfast host, 47, was discussing the final of the competition with her co-host Charlie Stayt on Friday morning, which will take place on Saturday evening.

When Naga suggested that the show isn’t fair, David hit back: ‘That’s an outrageous slur on poor Eurovision there, it is also entirely unpredictable.’

The presenters had been joking about the ‘growing optimism’ surrounding UK entry Sam Ryder, while speaking to David who was live in Turin, where the competition is being hosted.

The presenters agreed that while Sam may do well, he is unlikely to win the competition. Naga laughed and Charlie continued: ‘I am not going to read what it was going to say. I’m not going to say that.

‘What it says it might finally be the UK’s year, but we all know that is not going to happen because Ukraine has tipped everything on its head and changed things right?’ 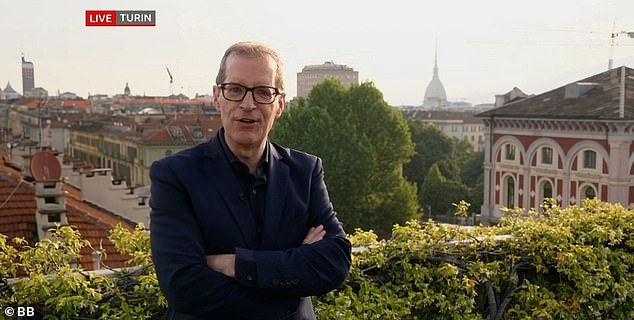 Not impressed: The Breakfast host, 47, was discussing the final of the competition with her co-host Charlie Stayt on Friday morning, which will take place on Saturday evening

Naga added: ‘The UK’s entry Sam Ryder is right up there among the favourites for the final. Now, here is us predicting, what do we know?

She then controversially asked David: ‘That was our speculation about how the voting would go, and I would not say it’s a fair process always, would you?’

David retorted: ‘I would say it is evidently fair, that’s an outrageous slur on poor Eurovision there, it is also entirely unpredictable.’ 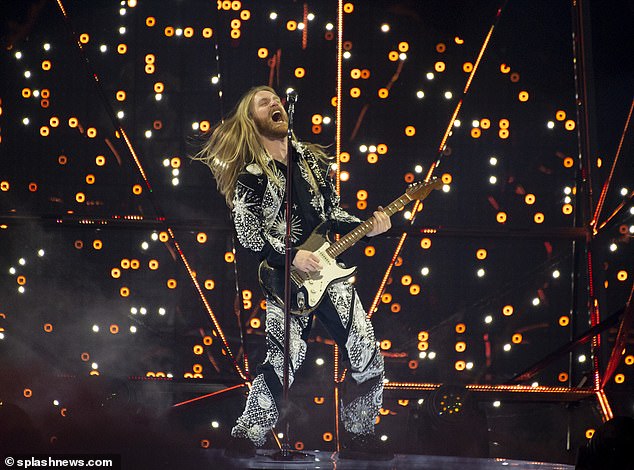 Hopeful: Sam will take to the stage to present the UK with his song Space Man at Eurovision 2022, and in a surprise development he’s currently second-favourite

David then filled them in on the drama from the semi-finals, and said: ‘You do not know what is going to go on and what drama we have had at the semi-finals.

‘Poor Ireland, poor, poor Ireland is out. There was such hope they would get through to the final.

‘You have got to remember Ireland is Eurovision royalty having won, I think, seven times.

‘Serbia and Finland were through and they are truly an example of how bizarre Eurovision can be.’ 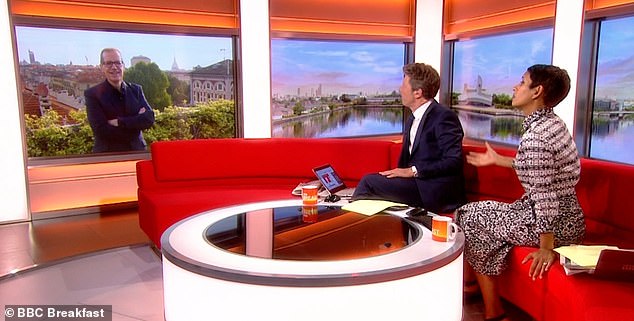 Outrageous! When Naga suggested that the show isn’t fair, David hit back: ‘That’s an outrageous slur on poor Eurovision there, it is also entirely unpredictable’

David admitted he felt optimistic about the UK’s chances, especially in comparison to previous years.

Revealing he felt optimistic about the UK’s chances, he said: ‘What I mean by UK’s year is a top 20 finish at least, that’s as far as I am going.’

‘However, yesterday I got to meet Sam Ryder, we had some time together, and the only thing you can say is wherever you are in Turin at the moment you keep on hearing his song Spaceman and there is a bit of a buzz about it.’

Sam will take to the stage to present the UK with his song Space Man at Eurovision 2022, and in a surprise development he’s currently second-favourite.

The 32-year-old singer has seen his odds of winning the contest slashed by bookies as Saturday’s final approaches. 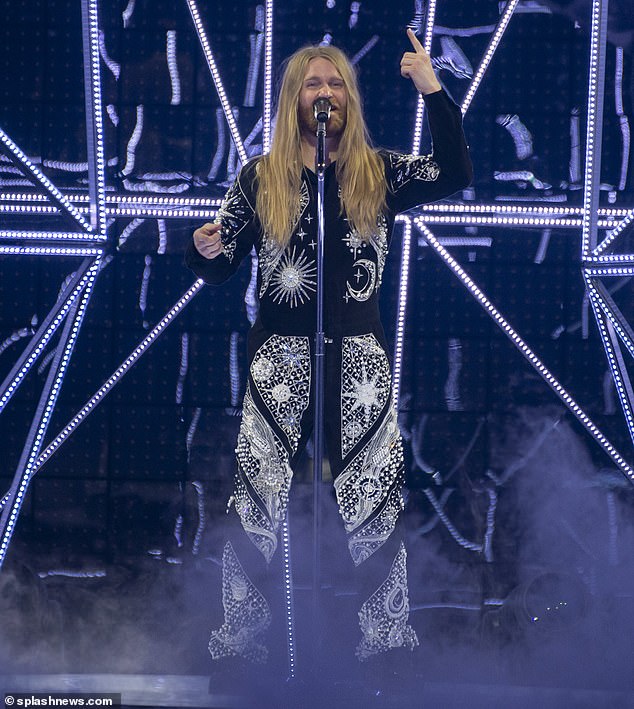 Woo! The 32-year-old singer has seen his odds of winning the contest slashed by bookies as Saturday’s final approaches

His odds are currently stacked at 8/1 for the win, a huge improvement since the 69/1 odds when the bookies first opened up their bets.

Despite the UK’s poor Eurovision history in recent years, fans are hopeful Sam could break the trend and perform well in the competition, bucking the ‘nil point’ trend.

He found fame covering songs on the social media site during lockdown, amassing 12 million followers and catching the attention of global stars including Justin Bieber and Alicia Keys.

Sam himself admitted on Monday that he is not focused on winning the contest, and his ‘personal goal’ is to simply get up on stage and sing.

He told i newspaper: ‘My personal goal for this is to sing with the same intention that I always sing with, and then come away with the joy it has given me. 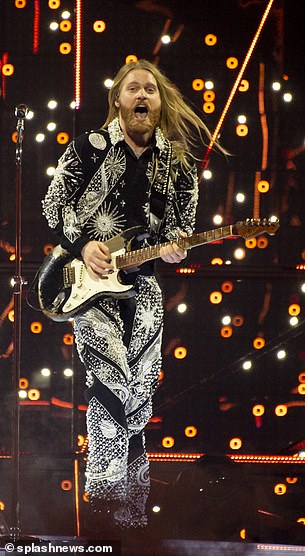 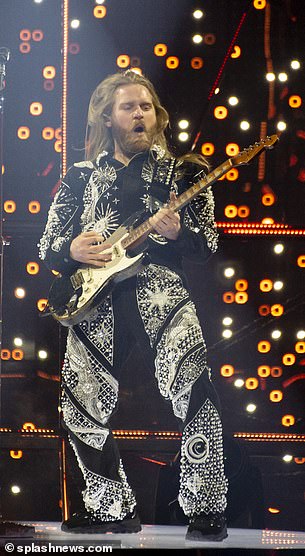 Glitzy: Sam dazzled in a lavish black suit embellished with silver sequins as he danced up a storm while playing electric guitar during rehearsals 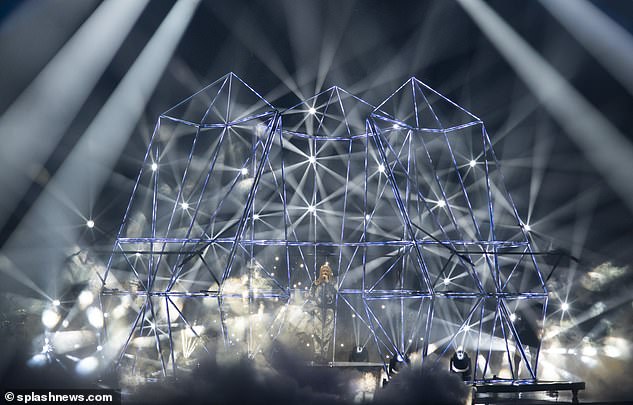 Impressive: Sam took to the stage beneath a massive metal structure, while spotlights surrounded him as he rehearsed for his epic performance

‘To make it strategic and to make it so that the happiness it gives me is dependent on where I come on a score board is something I really don’t want to mess with.’

Last year, the UK ended up at the bottom of the leaderboard after James Newman’s entry Embers scored zero points whilst Michael Rice’s 2019 entry Bigger Than Us also saw the UK finish last but Sam previously insisted that the ‘stigma’ of losing will not stop his enjoyment of taking part.

‘I love Eurovision. I think it’s such a privilege to be able to do. I don’t want to let the stigma or fear of coming at a certain place in a table stop me from doing something and being a part of something that I enjoy so much,’ he added. 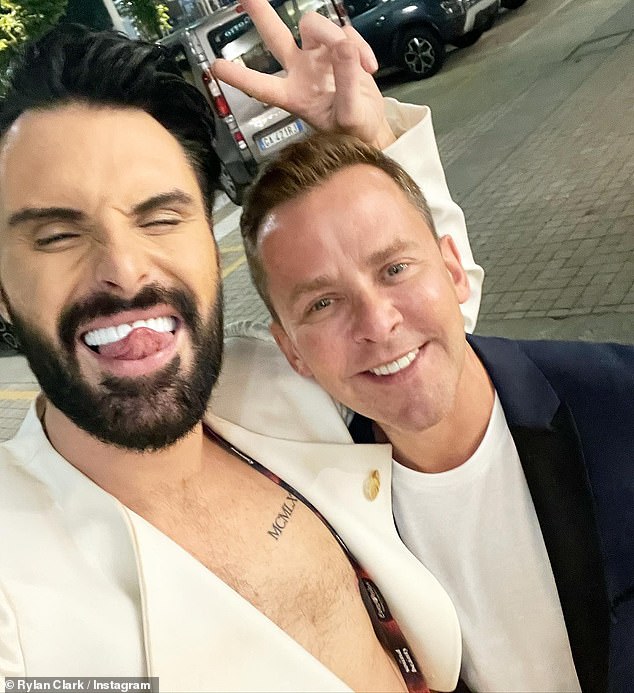 Show: Rylan Clark and Scott Mills grinned from ear to ear in a snap Rylan shared after they finished commenting duties for the second semi-final 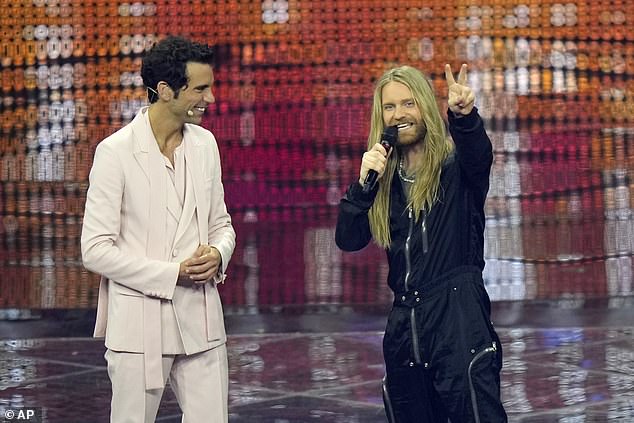 Contender: Sam flashed a peace sign at the audience as he appeared on stage during the semi-final on Thursday 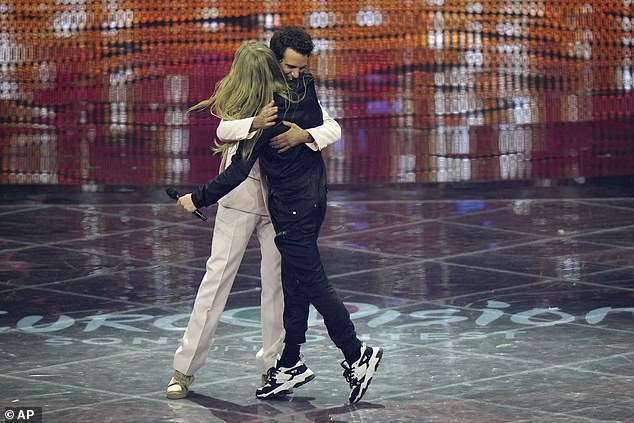 Event: He was given a hug by this year’s Eurovision host Mika as he took to the stage

The current favourites for the contest are still Ukraine however, after they advanced to the grand final, after band Kalush Orchestra took to the stage during Thursday’s semi-final in Turin.

However, track record over the past decade has shown that the pre-empted favourites of the competition have only taken home the prize half of the time.

The Eurovision Song Contest 2022 live final is on Saturday 14 May, 8pm BBC One.