Raja the orphan elephant bundles along the dirt track, his wispy coat of baby hair catching in the breeze and his trunk flicking up dust as he rushes for a daily bath and playtime with his new family.

His carefree joy at the wonders of life are obvious but the eight-month-old baby is already a survivor, a lucky escapee from a rising tide of persecution that is threatening the very existence of elephants in India.

He was separated from his herd as it was harried from its ancient travelling routes by villagers armed with makeshift fire bombs, klaxons, flaming torches, flashlights and firecrackers.

Raja is one of the lucky ones. He was rescued by villagers after becoming detached from his herd and is now being cared for at a rescue centre in a protected area in the Dhenkanal district. With playmates Katrin, ten, Chandu, eight, Uma, six, he has a new family and a safe future.

But an increasing number of elephant calves are becoming left alone and vulnerable on migratory routes. India’s rapid population growth to 1.35 billion has fuelled an expansion of towns, villages and settlements turning the trails that have served India’s elephants for generations and are imprinted on their souls into disputed territory.

Raja, an eight-month-old baby elephant, was taken in by a rescue centre after he became separated from his herd 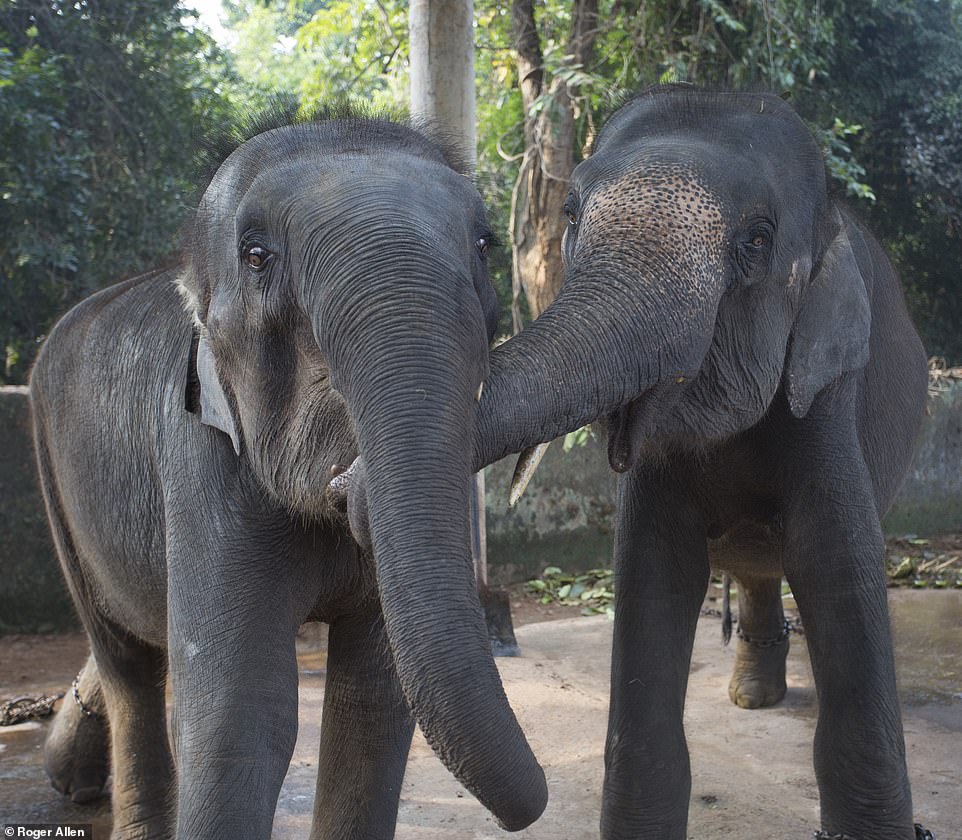 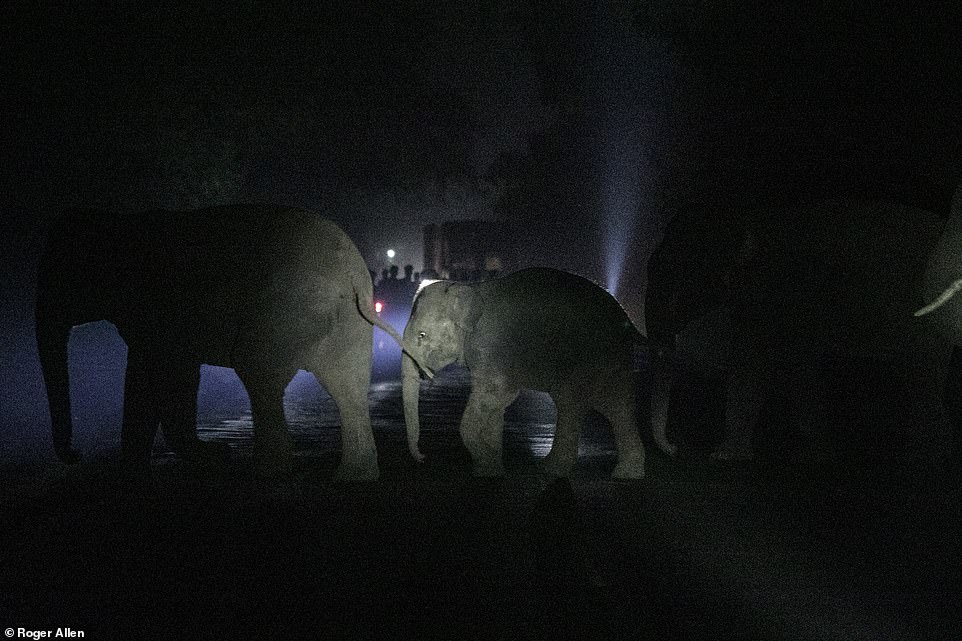 Across the continent herds of elephants are forced to cross networks of roads, railways, low hanging power lines, open wells, mines and canals. It is treacherous and many do not survive 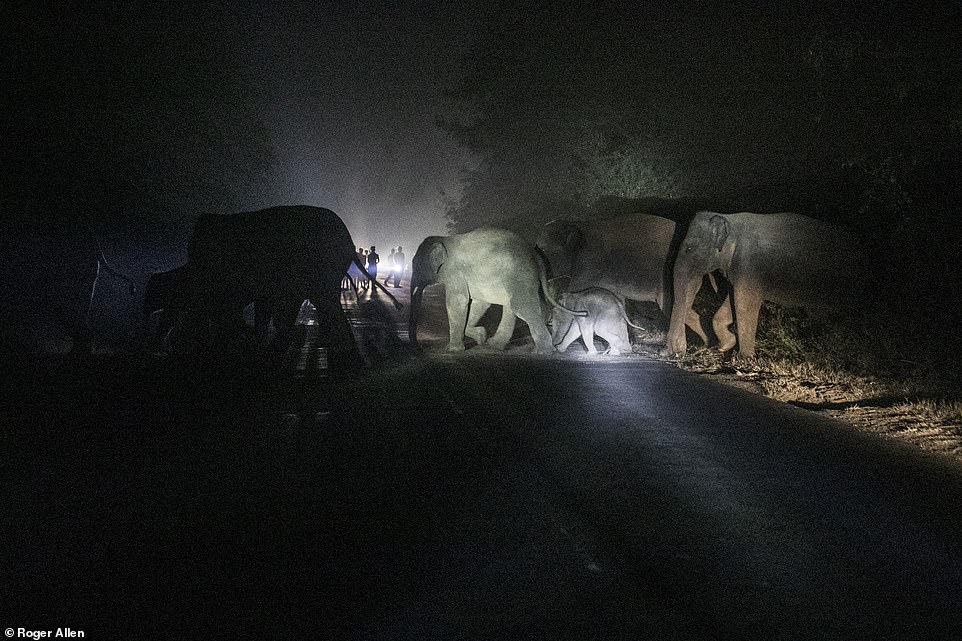 Urban changes disrupt the routes elephants have taken in search of food for centuries. Some have been hit by vehicles or electrocuted by power lines

Their homelands have become hostile environments. 121 wild elephants have been killed since May 2017 through contact with man and the urban infrastructure that is colonising the countryside as India charges towards being the most populous nation on earth within 25 years.

New power lines, hastily strung up to connect proliferating settlements, hang like limp garlands but their devastating impact hammered home one night in October when seven elephants – one pregnant and one a calf – were electrocuted by a low slung 11KV line as they crossed through paddy fields in Odisha, 250 miles south west of Kolkata. They were buried where they fell.

Their graveyard, a vast area of disturbed soil in the shadow of a coal fired power station and a lattice-work of electricity pylons, hums with the industry of thousands of flies. 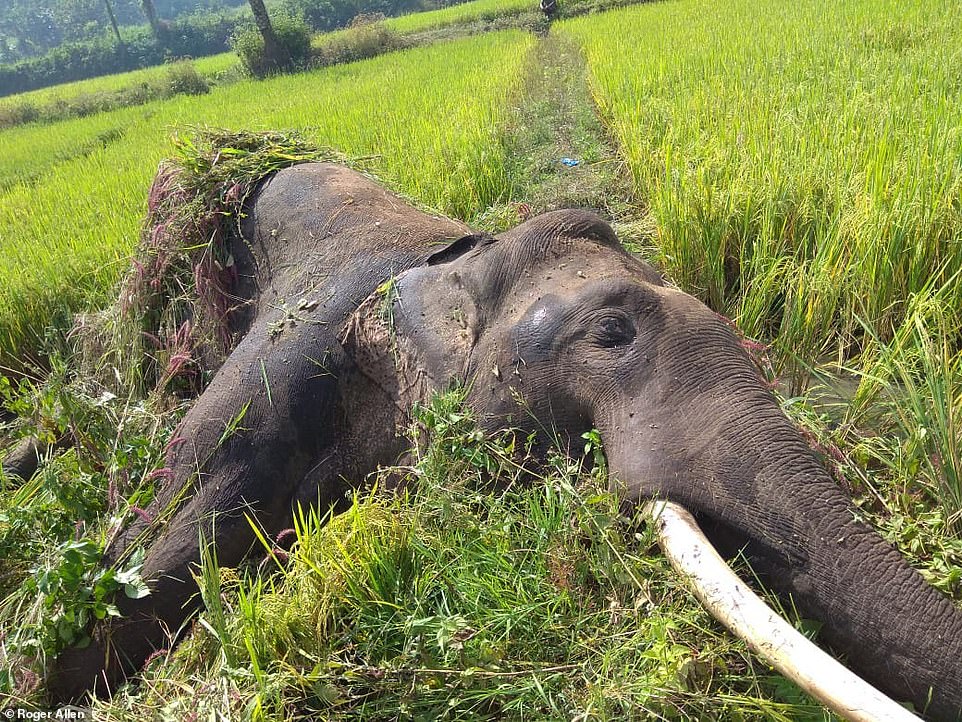 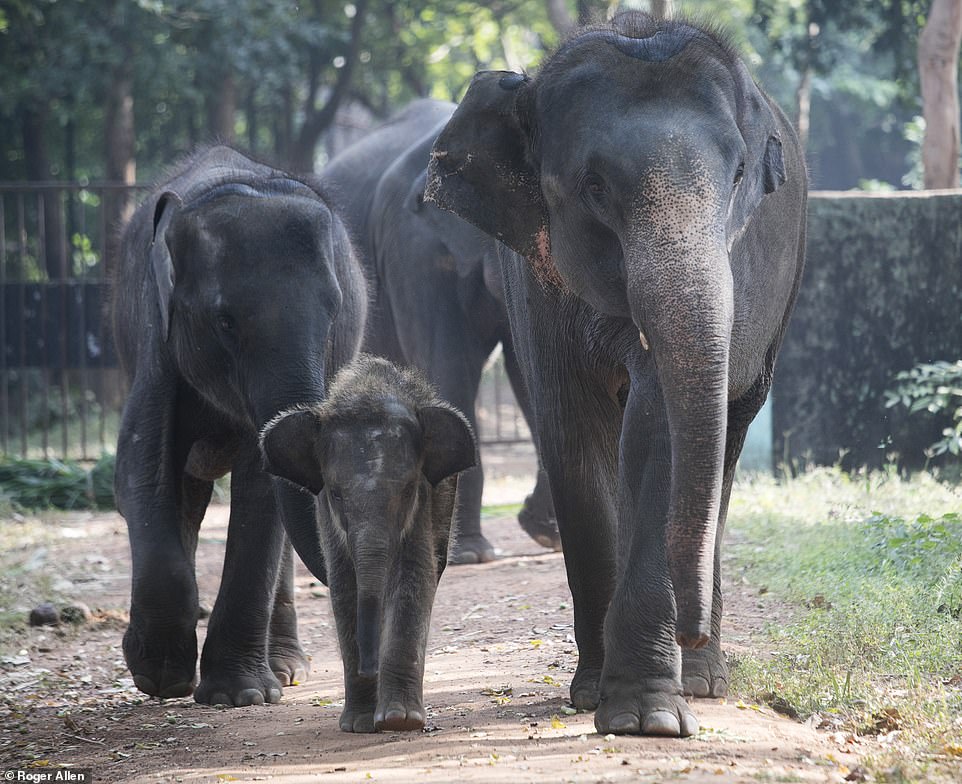 Raja now lives at a rescue centre in the Dhenkanal district with a new family of elephants including Katrin, 10, Chandu, eight, and Uma, six 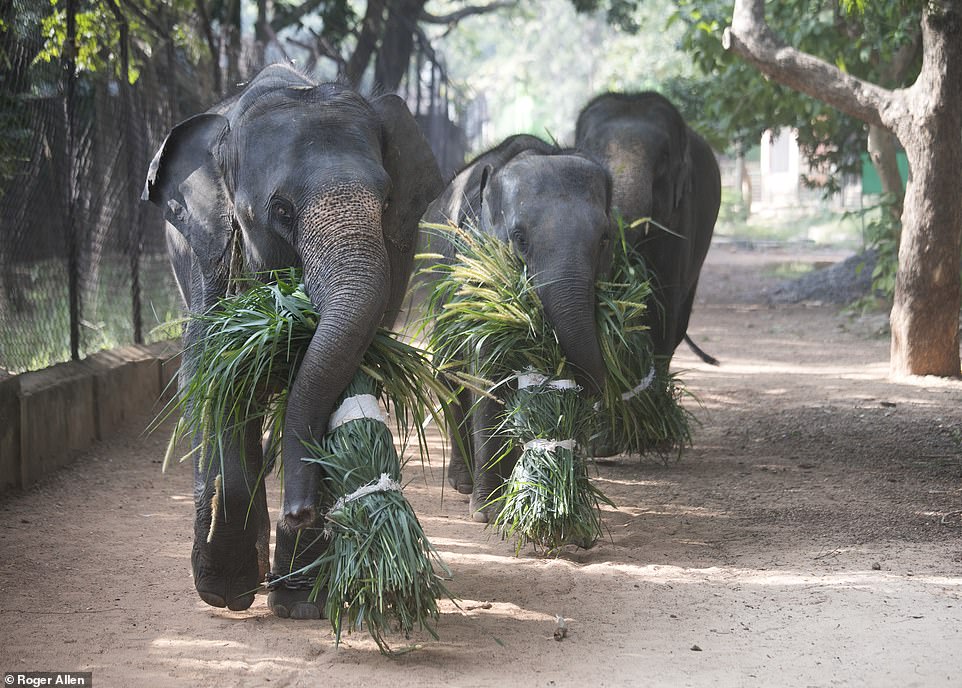 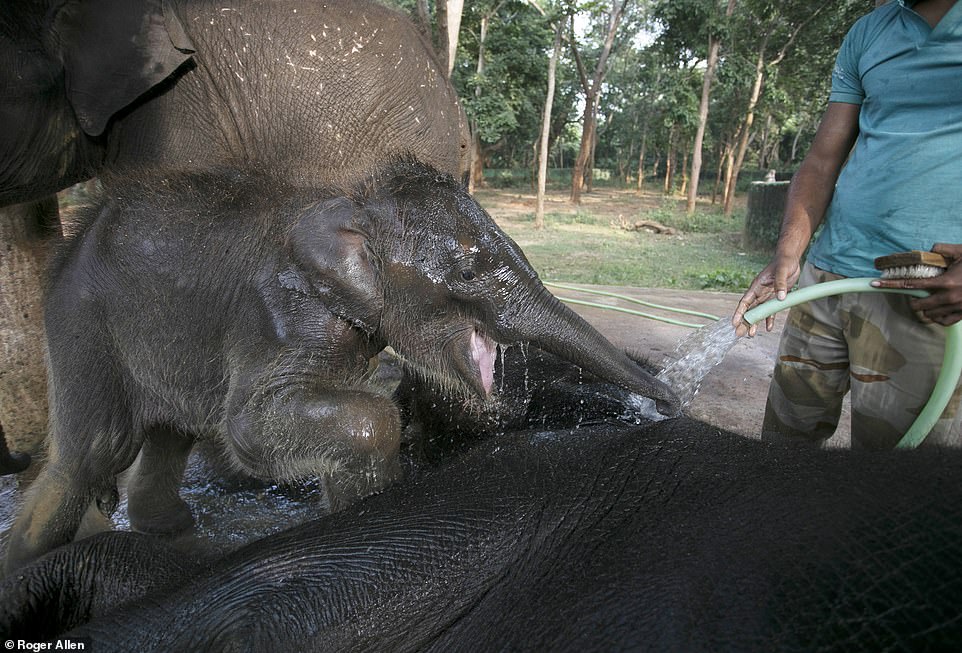 Raja is given a bath every day by employees at the Elephant Family charity, whose joint Royal Presidents are Prince Charles and the Duchess of Cornwall 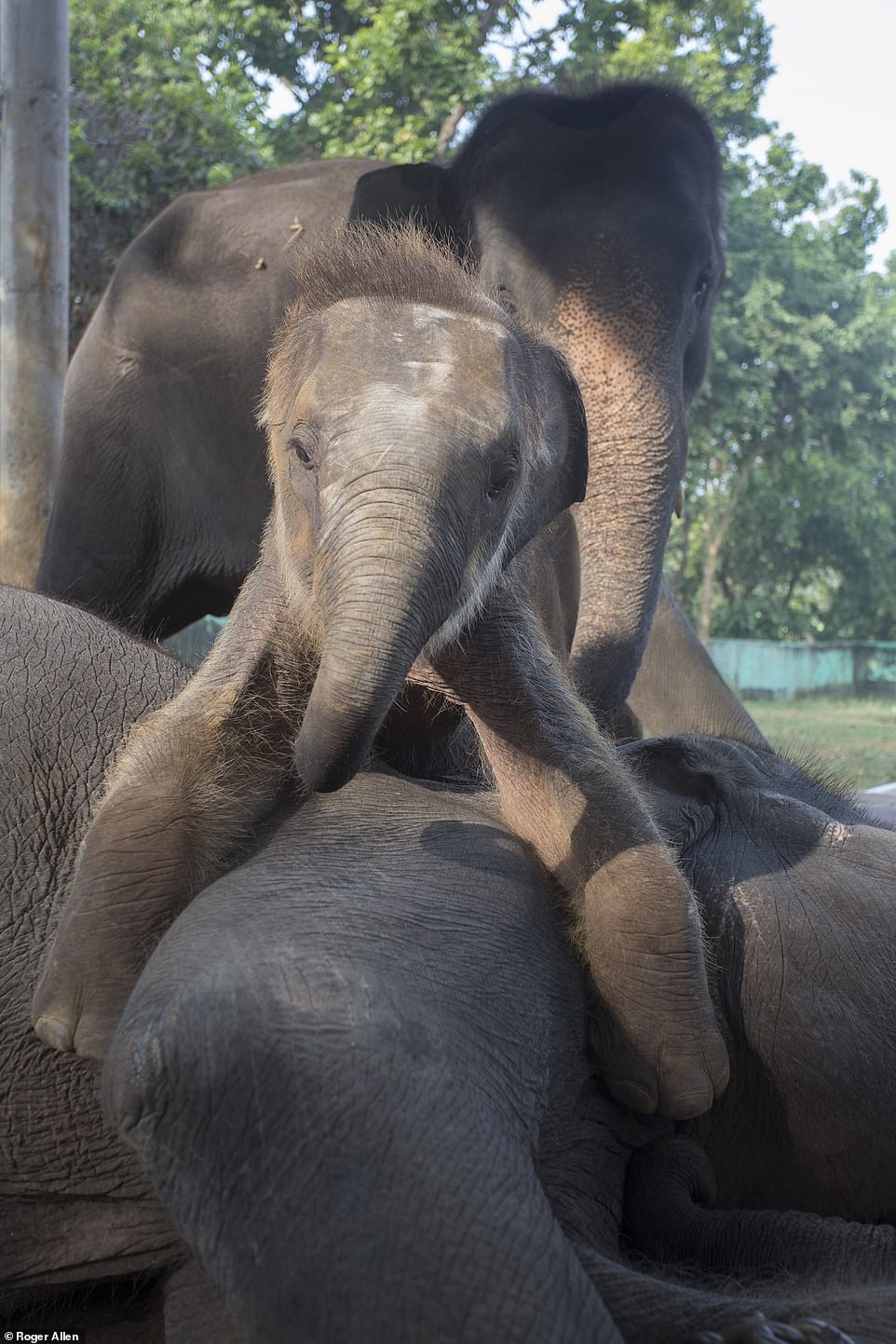 ‘This is such a tragic scene but we fear it will be repeated if the plight of India’s elephants is not recognised and a way of helping them live in harmony with man is developed,’ said Vicky Flynn, of the Elephant Family charity, which is campaigning to protect the elephants and educate and empower local communities to not see them as a threat.

‘There has been a campaign to correct these sagging power lines for more than two years but nothing has been done. It takes elephants to die to raise the issue and that is very sad and disturbing.

‘The elephants are becoming trapped into a stressful existence in lands that cannot support them as this becomes the worst place in the world to be a wild elephant.’

Orphan elephants are likely to starve to death if they lose their mother and become separated from the herds. 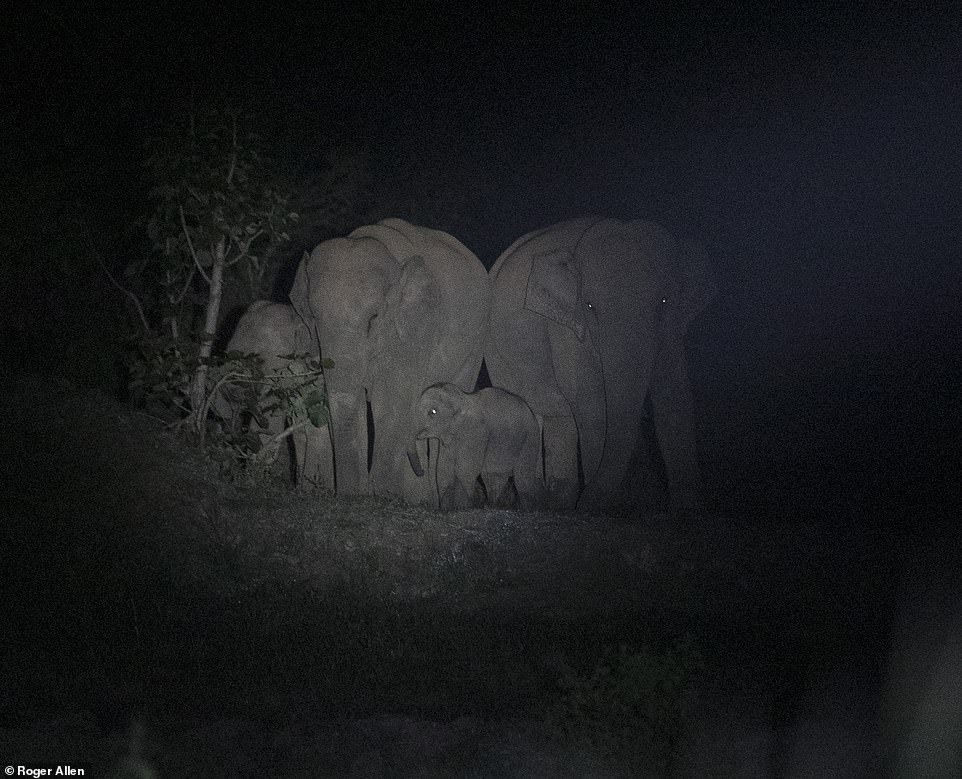 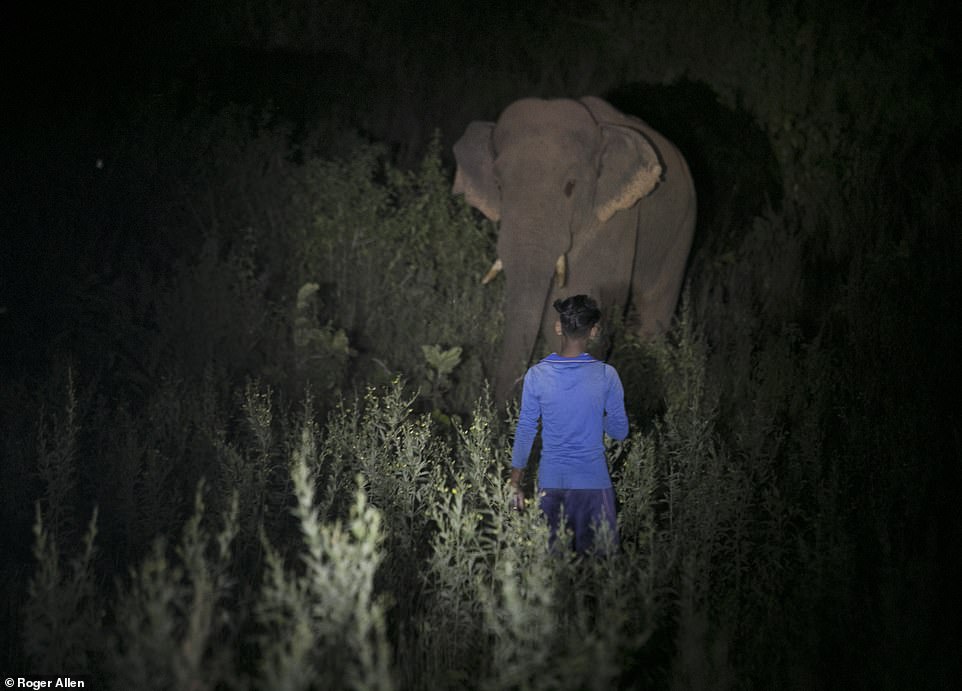 Elephant Family has established nine elephant corridors to give safe passage to 11,500 animals so far, but it wants to go further

India is home to 27,000 of Asia’s 47,000 elephants but their numbers have plunged by 90 per cent over the last century because of population growth and rising industrialisation leeching out into rural regions and fragmenting the landscapes where elephants roam.

The charity, whose joint Royal Presidents are Prince Charles and the Duchess of Cornwall, is running a comprehensive campaign to improve the survival prospects of Asia’s elephants who are now on the International Union for Conservation of Nature’s Red List of endangered species.

It has established nine elephant corridors to give safe passage to 11,500 animals but wants to create a network of 101 so all of India’s elephants can follow old paths between feeding areas to fuel their voracious appetites – adults consume 50kgs of plant matter and 100 litres a day.

Those once isolated navigation systems are now on the doorsteps of towns bringing them into conflict with villagers who fear for their crops, homes and their lives, and the Daily Mail witnessed the friction between man and animal.. 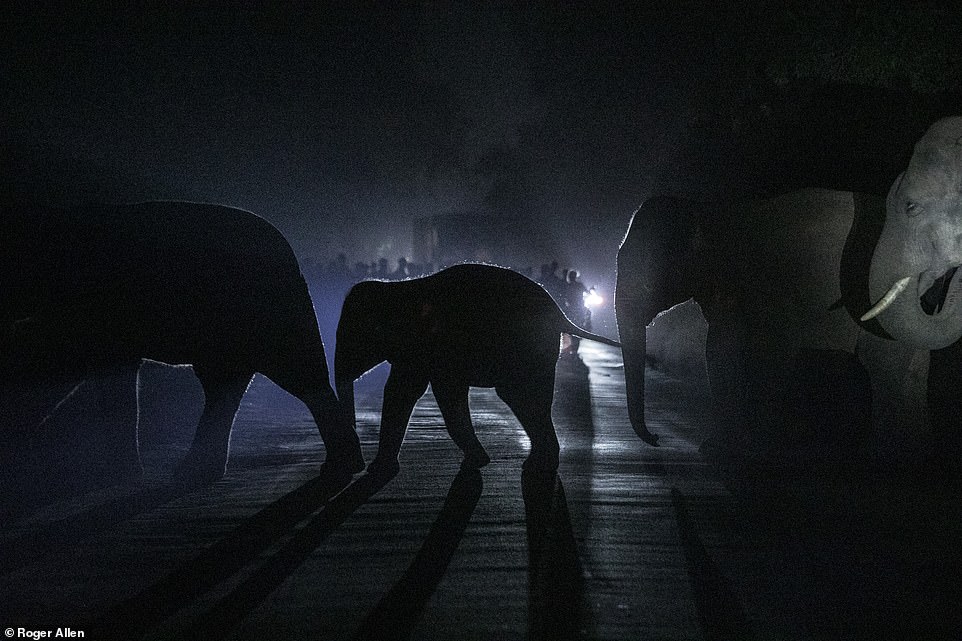 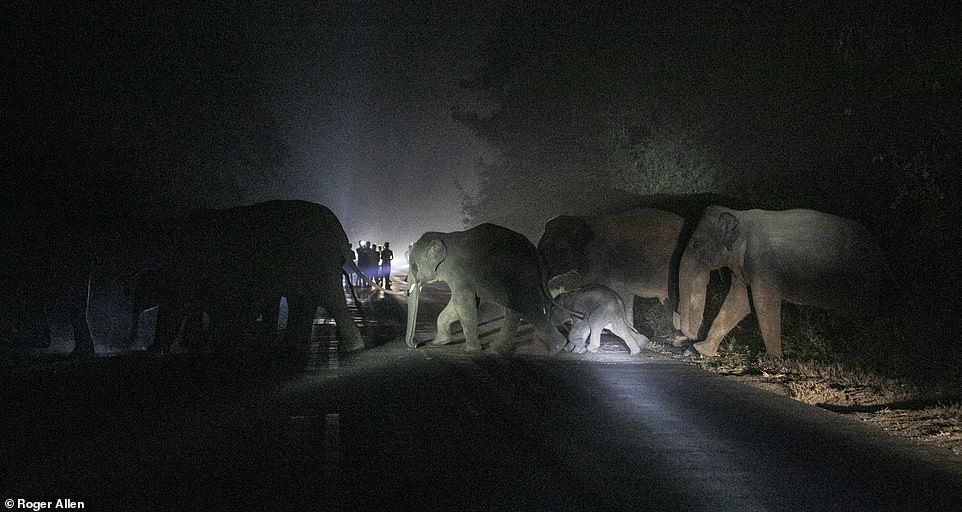 Some people directed harsh high-powered lights into elephants’ eyes as they crossed the road, leaving the animals terrified 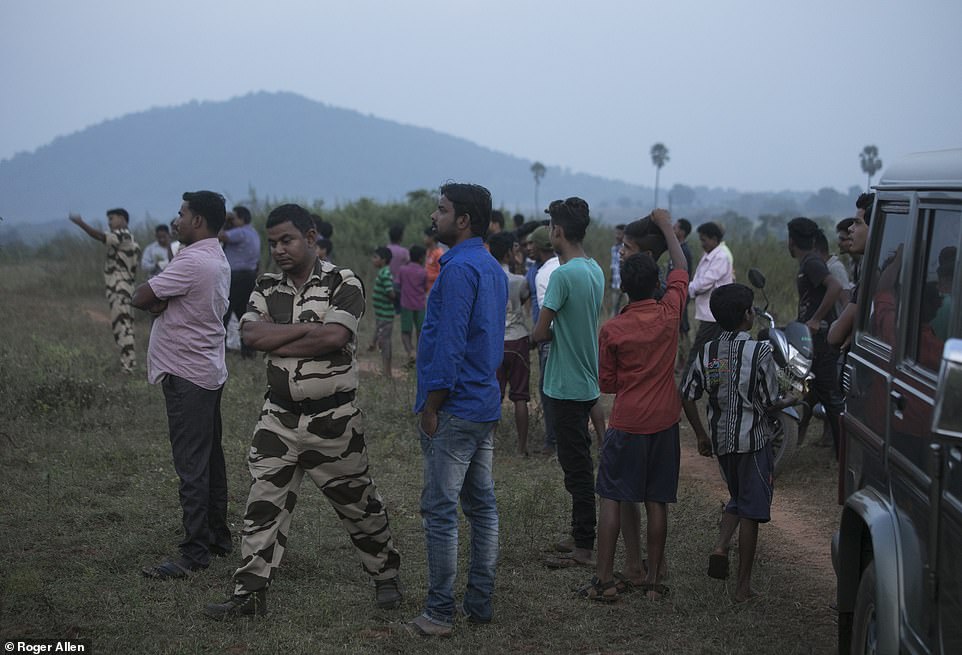 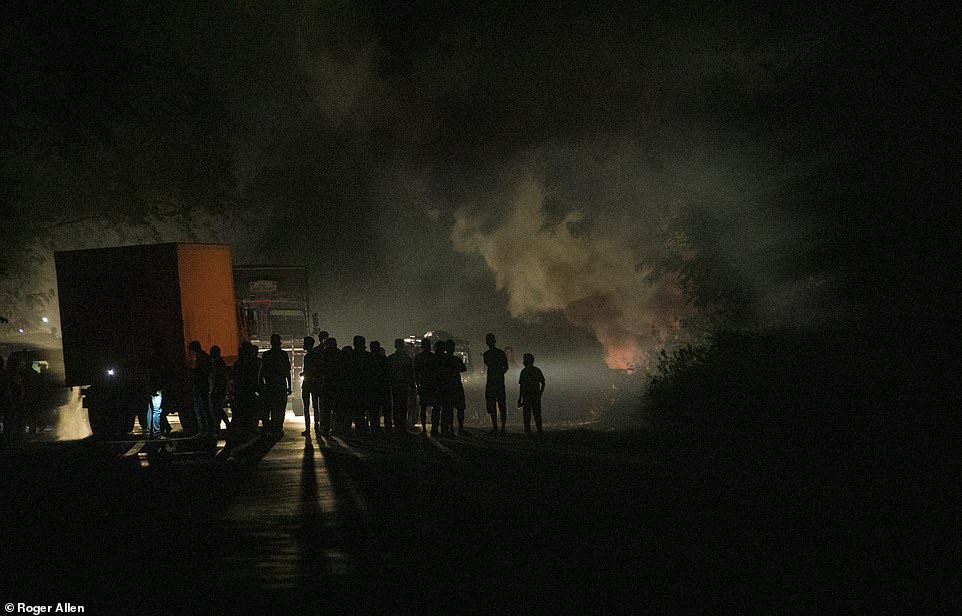 The news that a herd of 45 elephants had been spotted traversing a sparsely forested hill brought out a boisterous crowd in the country region of Odisha. They came not to marvel but to menace the animals as they approached the line where a busy highway cut through the forest.

The heavy rustling of branches indicated the herd had paused to assess the jeopardy of crossing the road as darkness descended. 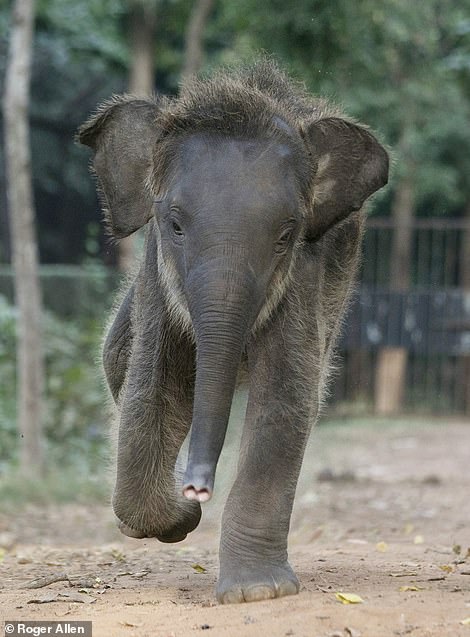 The battle lines were drawn and the stand off was broken by a youth splitting from the crowd to run shouting and flashing a torch as the herd formed ranks behind its leader.

Harsh voices filled the night as others surged forward directing high powered lights into the eyes of the elephants as they peered through the tree line.

An elephant launched a mock charge to test the crowd but it was met by a defiant cacophony of noise and aggression.

Hastily lit fires sent choking smoke billowing across the road as the tension mounted. A female and her calf edged nervously forward, looking up and down the road but the angry mob scared them back.

Forest rangers had stopped the traffic to prevent the potential carnage of a truck running into the herd and tried to keep the villagers at a safe distance.

The elephants trumpeted and rumbled back at the crowd as they gathered courage and emerged from the trees, hustling across the road in single file, heads down, with the terrified calf tightly shadowed by two adult females.

For three minutes their resolute tread took them to the safety of the far side with the rear being brought up by a giant tusker which had been marshalling the herd and encouraging them on their way.

‘This was not a one-off. The same herd and others like it will have to negotiate the same highway every day,’ added Vicky Flynn, who observed the confrontation.

‘And across Asia herds of elephants trapped by networks of roads, railways, low hanging power lines, open wells, mines and canals must run the same gauntlet to survive. Many don’t make it.’ 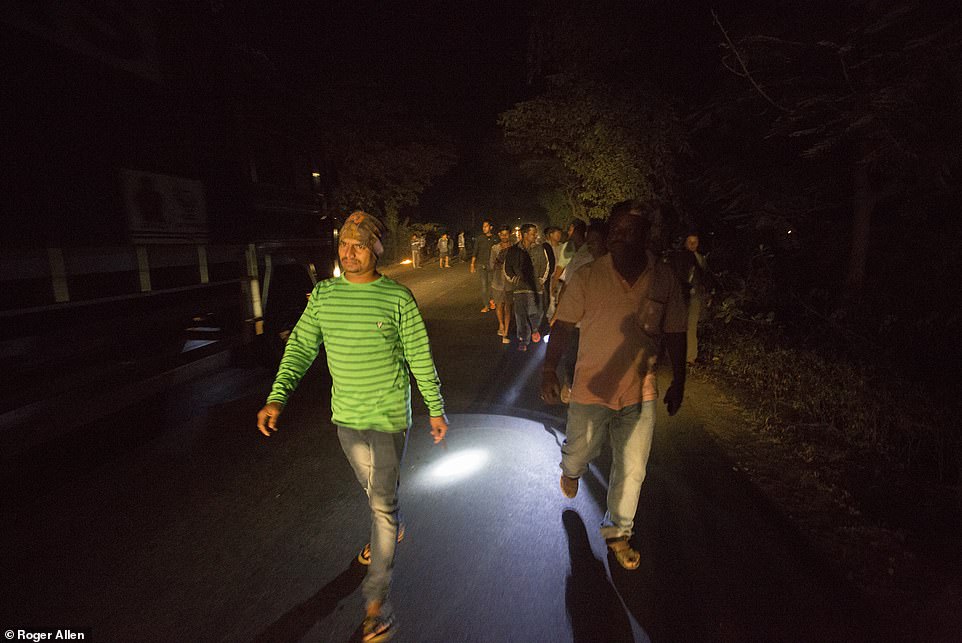 The death toll of both elephants and humans is growing due to the escalation of the conflict, fueled by India’s expanding population

Around 50 elephant deaths are recorded every year because of the growing conflict with man but many more go unregistered.

Elephant Family, whose patrons include Goldie Hawn, Sir Tim Rice and Lord and Lady Bamford, has been funding programmes to mitigate human-elephant conflict in seven key districts of Odisha since 2011.

The area – which has linked forests covering almost the same size as Wales – is vital to the future of Asian elephants in India and the charity has brought in a range of initiatives to improve their chances of survival.

It has trained 80 groups in conflict prone villages to manage the danger to life and crops caused by elephants and to claim compensation when it does happen so that farming communities become more tolerant.

Its education and awareness programmes are also helping ease tension and support is being offered to build concrete covers for open wells that lead to the death of four elephants last year and to protect migratory routes where they cross new highways.

But the death toll is growing on both sides, leaving orphan elephants who starve to death if they lose their mother and become separated from the herds. 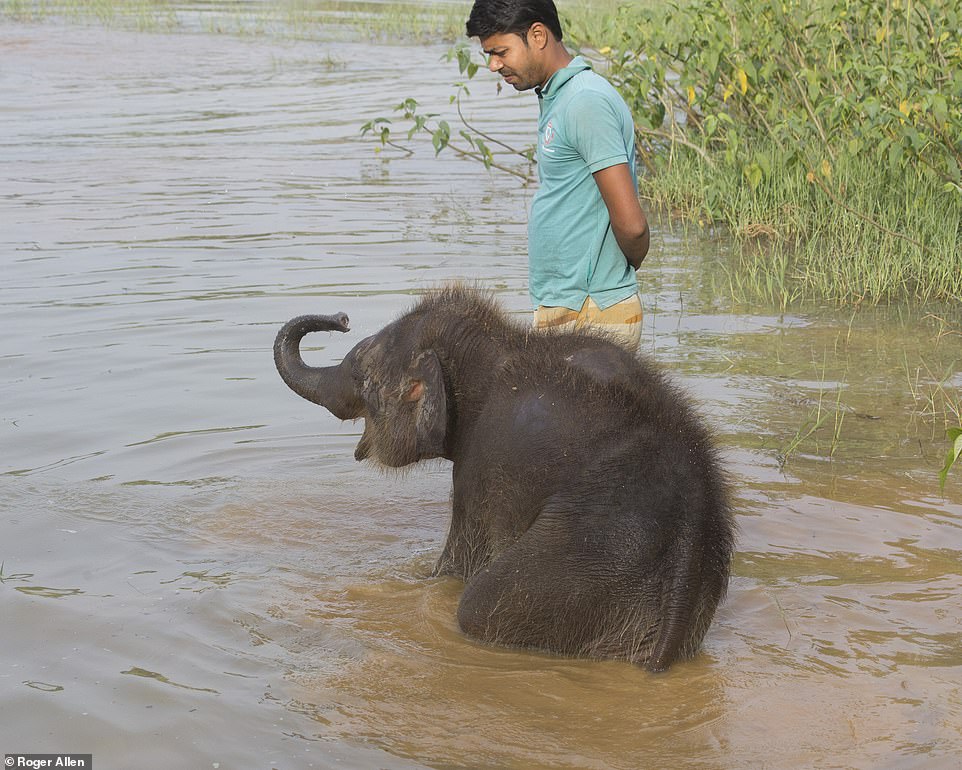 Raja was rescued, but numerous other orphaned elephants starve to death if they lose their mother and become separated from the herd 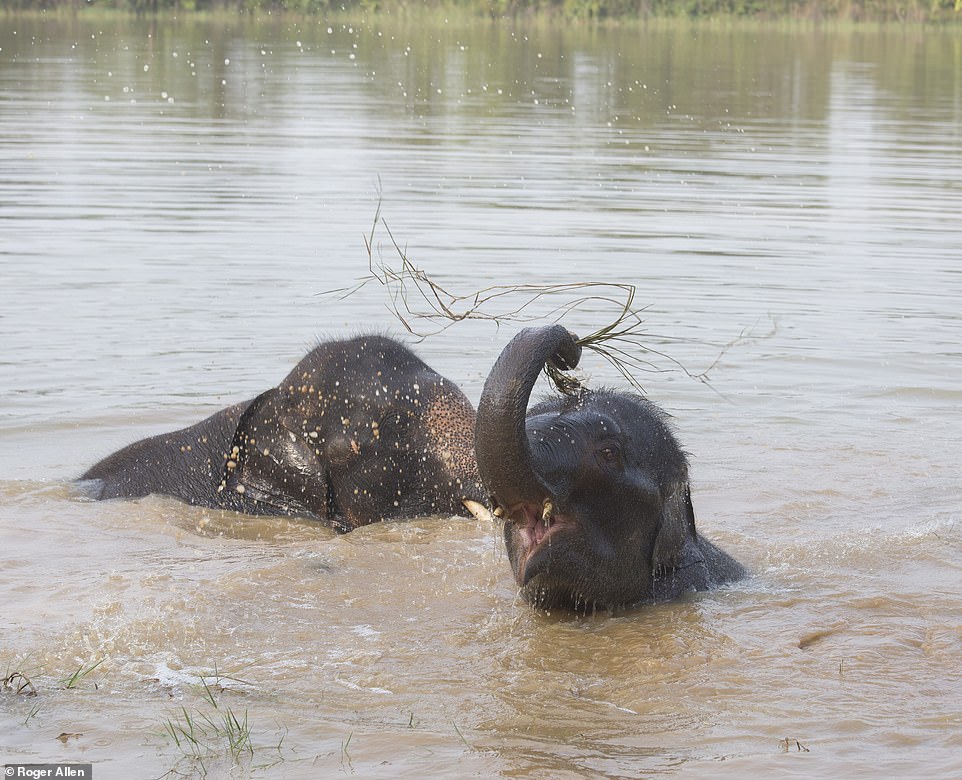 As human populations are growing, landscapes and habitats traditionally occupied by elephants are disappearing, leaving them vulnerable 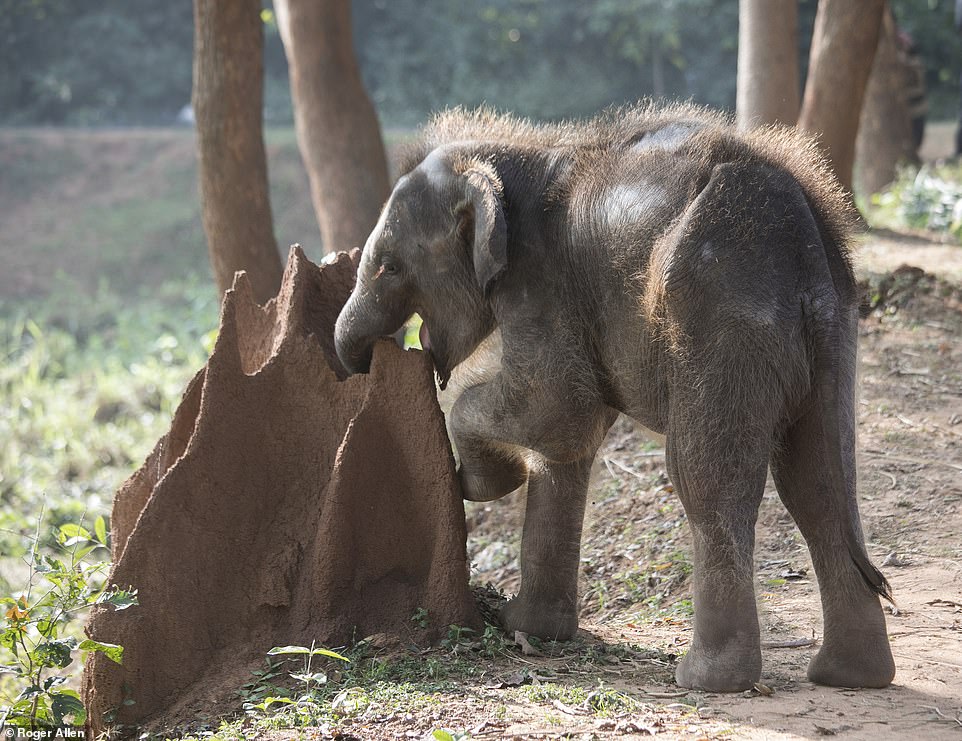 At only eight-months-old Raja the elephant calf is recognisable by his wispy coat of baby hair. He is one of the lucky calves who was rescued after being separated from his herd. Others have not been so lucky

‘Being in close proximity to them is humbling. Their gentleness is overwhelming,’ added Vicky.

‘Spending time with the orphans you realise how incredible elephants are and how, in a perfect world, they would be wild and free, roaming with their herds across richly forested landscapes they have enjoyed for millennia.

‘Sadly, as human populations grow, those landscapes are disappearing. But, through carefully targetted conservation projects and education programmes that help people and elephants co-exist, there is hope for Asia’s elephants and for every little Raja growing up in the wild.’