The Bachelor ring worth AU$20,000! After viewers react to the diamond sparkler seen on The Bachelor

Fans of the Bachelor are already speculating that Nick ‘The Honey Badger’ Cummins will propose to his ladylove after he flashed a dazzling ring on the first episode.

Now, an insider has exclusively revealed to Daily Mail Australia that the engagement ring Nick is tipped to use to propose to his leading lady is worth more than $20,000.

In the opening introduction teasing the season ahead, the former rugby union star can be seen opening a jewellery box from Larsen Jewellers, the same company who sponsored Matty J Johnson’s promise ring for Laura Byrne. 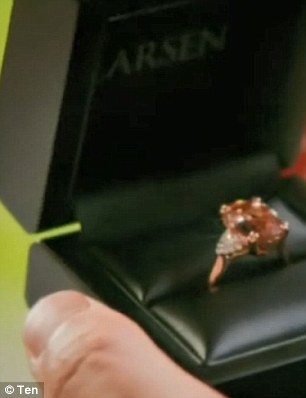 EXCLUSIVE: That’s some impressive bling! The engagement ring The Bachelor Nick ‘The Honey Badger’ Cummins (pictured) is set to pop the question to his leading lady with is worth a whopping $20,000

In the brief clip, Nick reveals a peach-toned gem set in between two smaller diamonds and says in the voice over: ‘I see a future that is just so beautiful.’

As the underwear model admired the dazzling ring, viewers took to Twitter to guess whether he would get down on bended knee at the end of his season.

‘Is that an engagement ring?’ One excited fan questioned.

They continued: ‘I am going to have some hashtag THOUGHTS if the second Bachie season ends in a row ends in a proposal. #TheBachelorAU,’ referring to Sam Cochrane’s proposal to Tara Pavolvic.

However, another fan of the show found Nick’s ring unappealing, tweeting: ‘That ring is ugly as f*** #TheBachelor.’

Mixed opinions: Viewers took to Twitter guess whether he would get down on bended knee at the end of his season. However another fan of the show found Nick’s ring unappealing, tweeting: ‘That ring is ugly as f*** #TheBachelor’ 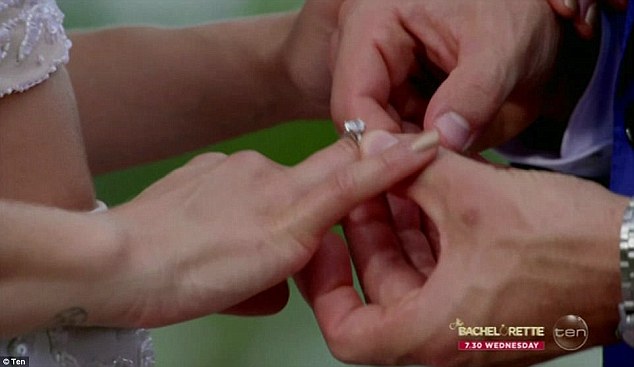 According to the jewellers, their team helped Matty J design and create a special custom made promise ring for Laura.

‘As one of the most respected jewellers in Australia, Larsen Jewellery specialises in custom made pieces of fine jewellery, which can be designed to meet the individual taste and requirement of each client,’ the company wrote.

In the premiere episode, Nick was introduced to 25 beautiful and eligible suitresses.

He recently told OK! Magazine that he was open to the idea of proposing to the woman he falls in love with at the end of the season.

‘For me, it’s definitely possible! Diamonds aren’t included, because I think it’s a business venture and good marketing…. [I’d] probably propose with a burger ring,’ said.

The Bachelor Australian continues on Channel 10 at 7.30pm 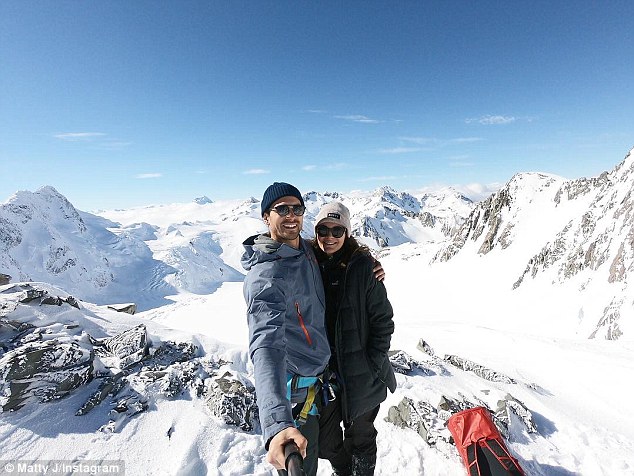 Helping hand: According to the jewellers, their team helped Matty J design and create a special custom-made promise ring for Laura. Pictured: Matty J and Laura Byrne at the end of The Bachelor still going strong in 2018